Tuesday, October 11, 2016: I think the sky was sheepish over the long batch of unnicenss ... monarchs and ragweed pollen takes flight 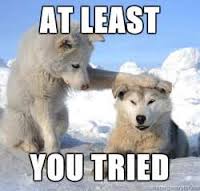 Tuesday, October 11, 2016: I think the sky was sheepish over the long batch of unnicenss it saddled us with last week. We’re seeing some sky sweetness, with light N to NW winds.

It is prime surfcasting conditions out there, thank-you very much. I’ll take it.

I have a relatively light writing week – though potentially wrought with outside-work drama … but I don’t want to sweat stuff until the time is right.

Beaches are huge and getting huger. I had been asked not to hype buggying until any lingering northeast winds affects had gone. Well, they’re gone. Most drive-on points are fine. Just avoid replen construction zones in LBT.

10/11/16 A video is worth a load of words. Check out the remarkable width of Ship Bottom beaches. I paced it off at over 100 yards from toe of dune to water's edge ... low tide.

We really need all y’all to sign up for the Classic. I realize many anglers weren’t big on our ugly opening weekend but things have improved drastically, helped along by the way some NJ-friendly high pressure systems turned Matthew away from us. We could have had one helluva nor’easter from him, even if he were downgraded to a mere depression.

Strengthening Hurricane Nicole will be a wavemaker but not a heartbreaker. GAS PIPELINE READYING TO CROSS BAY: I want to make note of somewhat troubling cross-bay pipeline being planned by New Jersey Natural Gas. The company will extend a single pipe from the east end of West Creek Dock Road, Eagleswood, pretty much straight across the bay, dead east, to th west end of Kimberly Avenue (59th Street) in Brant Beach.

I’m not fully sure of that Kimberley Ave. end-point but it will come ashore in that vicinity.

The project was brought up at a recent Eagleswood meeting, where it was advised that the initial phase will tear up the township’s Dock Road bay beach.

I’m a tad put off by what seems to me to be a swift silence to a ditch-dig that will make a trench clean across the Manahawkin Bay section of Barnegat Bay. That seems kind of invasive to me. I’m guessing winter flounder will be pissed.

I know the NJDEP is still taking comments but I get a sense that the project is close to a DEP done-deal.

Hey, I try to be open-minded about things like this, knowing there might be more than a few LBI folks wanting a better flow of cleanish natural gas. And it does emit 50 percent less carbon dioxide than coal. However, it isn’t even in the cleanness ballpark when compared to solar/wind/ocean power. The best that can be said is natural gas is cleaner than coal – and requires miles of bay-bottom pipe.

Running the pipeline along the Causeway had been considered and rejected. Not sure why. 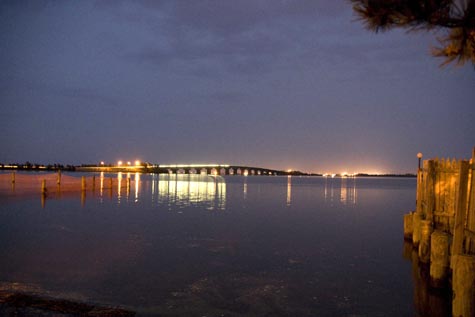 FRESH AIR FIRING: I got word that the Gormley Shooters Sporting Center on Rte. 539, Little Egg Harbor, is on the brink of opening an outdoor shooting/target range, providing sundry hurdles are cleared.

While even an outdoor range might sound noisy as all small-state get-out, I used to shoot in Florida at the onset of research on noise abatement material, like noise blocking fencing. What was being tested there was remarkable in its noise-absorption quality. By now, many years later, I’m betting there are some cutting-edge advancements in keeping the sound of outdoor firing down to a neighborly level. Hell, the improvised firing range used by area PDs is just off Rte. 9 and, when used, can ring out like a shootout at the OK Corral.

TAILWINDED BUTTERFLIES: The recent stint of torrential north winds were traveling music for population-troubled monarch butterflies. Autumn in and autumn out, these majestic flutterers get blown off their southerly migration course by the onset of our fall west winds. They end up blown way out over the ocean, beating their wayward wings westward to the cadence, “Oh, crap. Oh, crap …” 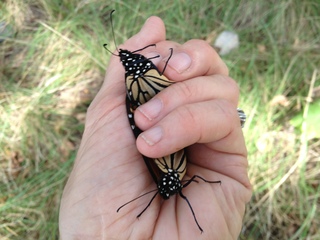 This year, they’ve been able to harvest the north, getting blown straight south -- so fast they can’t even slow down enough to land and say “Hey” to moth friends in the Carolinas.

This migratory success is music to the ears of monarch-loving folks who have gone the full metamorphosis Monty, raising monarchs from eggs to caterpillars to pupae to golden-winged wonders. Before release into the thermals, many home-bred monarchs get tiny license plates placed on their wings. Here’s hoping those tagged butterflies carry greetings from NJ to awaiting scientists at overwintering monarch locales. 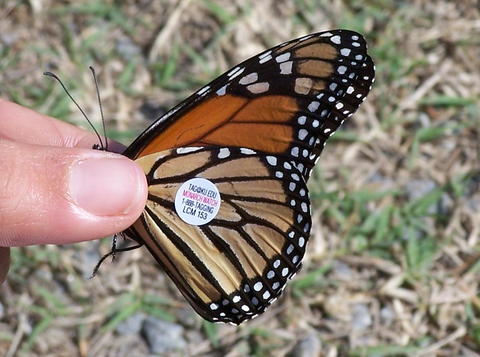 The common ragweed is the small one, a couple feet tall, tops. Nonetheless, it’s a pollen-spitting baddy on its own. However, it’s the great ragweed, often pushing five feet in height, that has an eye-high pollen launch-point. Much of the ragging about ragweed in our area should be aimed at the great variety.

Be it small or sunflowerish in size, a single ragweed plant produces a billion-plus grains of pollen, per season -- and even more during hard-partying years. 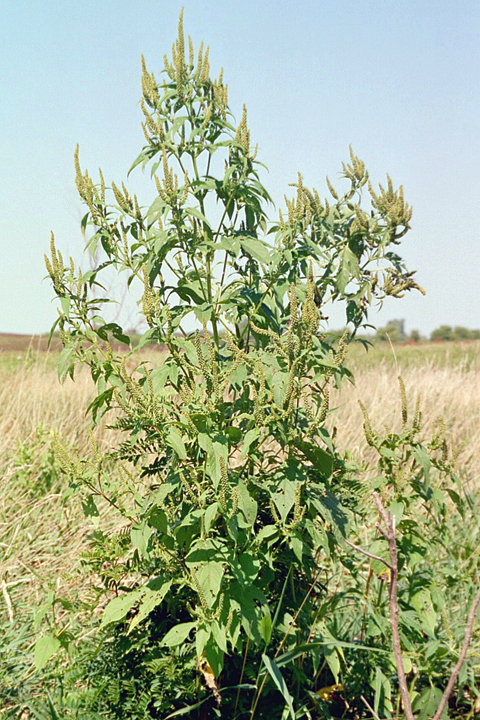 In NJ, ragweed is the cause of over 50 percent of all allergic rhinitis cases from pollen.

But what about those famed, thought allergenic, fall boomers like goldenrod and Queen Ann’s lace? Due to its fall brightness, the drop-dead gorgeous goldenrod is perpetually blamed for fall “hay fever.” Total bunk. Even allergists, who seem to love blaming just about everything for their patients’ allergies, grudgingly admit goldenrod can’t even make eye water – unless a foot-long stalk is accidentally slapped across a kid’s face. Hey, we were kids playing swords with entire goldenrod plants. Mom’s first response, “I told you someone could lose an eye!” 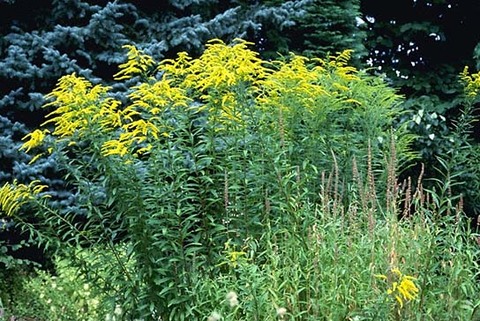 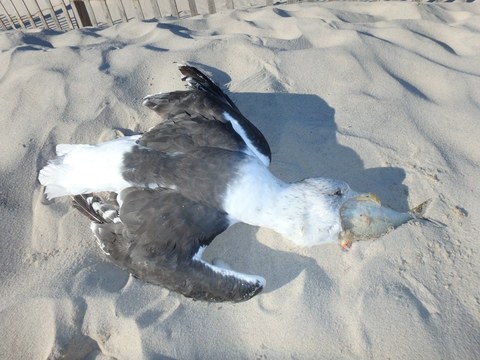 I have never seen this scene before, a blackback seagull choked to death while swallowing an adult bunker. It must have gotten lodged at the most imperfect angle. I pulled the bunker out and buried him gracefully in the dunes. 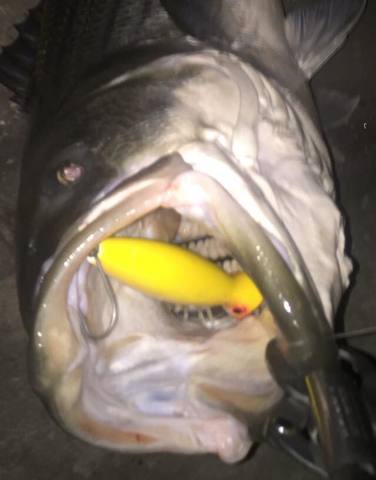 Blaine Anderson
It doesn't get any better than eastern Long Island Sound in October. 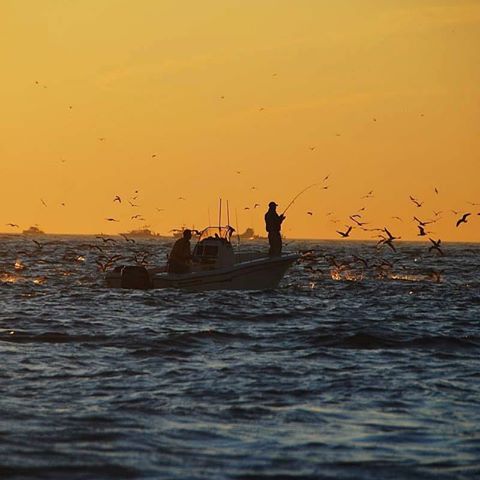 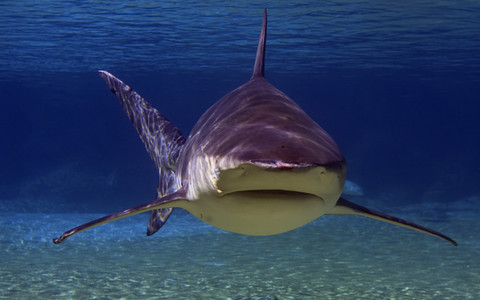 The council reviewed the first draft of an ordinance that would prohibit both fishing and chumming for sharks 300 feet north or south of Municipal Beach or beach access points.

Town officials said the regulation would help ensure the safety of swimmers and beach-goers.

No decisions were made Monday, but town officials said no one was opposed to the ordinance and it would likely pass during a council meeting next month.

According to the deputy town manager, if the ordinance passes it will go into effect immediately.