Tuesday, November 29, 2016: Hey, why not end November on a wet note? We couldn’t have asked for a prettier looking month ...

(Some info on sunken boat further below, via http://thesandpaper.villagesoup.com)

So, I'm out all day looking to photograph an owl and nothing ... get back to the parking lot and ...

Below: why it's best to have a spotter even when doing a simple Facebook instructional video ...

Boy, I would have made a fool of myself sitting on this chair ... 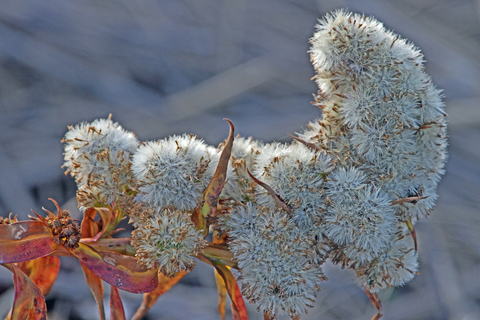 Tuesday, November 29, 2016: Hey, why not end November on a wet note? We couldn’t have asked for a prettier looking month. Now to allow the skies to make what will likely be a fairly feeble effort to chip away at the rainfall deficit we’ve seen for months on end. It’ll take more than today’s sky spurt to get creeks running right.

The south winds have really kicked in, honking at a steady 25 mph. Waves to eight feet have been reported at the nearshore buoys. The beachline is seeing breaking waves closer to six feet. Tomorrow will hold onto south winds to 30 mph. Winds will honk offshore starting tomorrow night.

Nearby ocean buoys are reports water temps in the mid-50s. That’s strangely high.

I have to think there’s going to be some insane erosion cliffs (cutways) along the beach so if you’re buggying the sands, stay highly alert near the water.

I’ll be buggying Holgate midday. There is surely some ugly erosion since the south end doesn’t take south winds well.  They chew things up something awful.

For those up to the challenge, there should be bigger bass in the swash through tomorrow. Fishing south winds is best done with bait. If plugging, the largest and brightest Dannys finally get to shine. They don’t have to be cast out very far, just fish them deeply. I have to think BL end will offer a 50-pounder during this blow.

Use the biggest custom plugs you got. Tail hair helps. 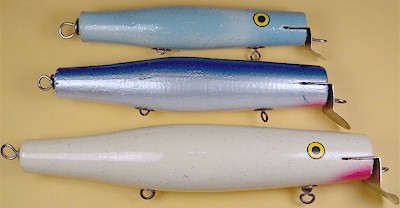 I want to put in this Joe H. report, though conditions have greatly changed from the laid-back weather he was fishing Monday evening.

(Monday, Nov. 28) “Very good plugging today from Harvey Cedars to North Beach right before dark today. Had about 10-12 fish in the 25-33" range. More than half were keepers. Released them all. They wanted wood ... swimmers and pencils. White shads worked, too.”

Still, those stripers are likely still in the system, eating crabs. I'm convinced one of the draws of side-ass south winds this time of year are slow crabs uncovered by wave action. Every study done on stripers put crabs as the Number One foodstuff, accounting for opportunistic dining on fin forage in the fall.

Below: Throughout life, a Jersey striper likely eats hundreds of these shelled goodies for every finfish. 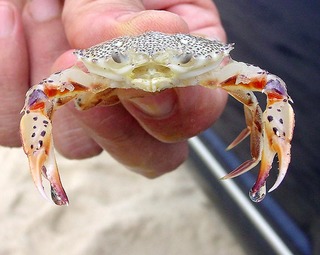 Oddly, of these, only the mantis shrimp and shedding lady crabs work as bass bait ... and even then they're not overly effective. that great. I have caught smaller bass on sandcrabs being used to fish for tog -- back when we used to have jetties. However, when I used them away from the rocks, fished off pompano rigs, nothing ... though, even between jetties, I'd get an occasional tog, likely moving from jetty to jetty.

Here's what small information The SandPaper could get about the boat sinking in BL. It was a smaller vessel than I first thought -- though I'm sure it was a painful loss to the owner. Sorry, Cap.

A smaller craft at the Barnegat Light Yacht Basin sank and burned early Monday morning. New Jersey State Marine Police were still investigating the cause the next day, but said “it doesn’t appear to be suspicious.”

State police from the Point Pleasant station were dispatched at 4:45 a.m. Monday.

“The boat was engulfed; it was completely damaged,” said Trooper Alejandro Goez. “Nobody was injured.”

The boat was registered to John Selover, who could not be reached for comment. Sources at Viking Village commercial dock said the boat had just been purchased and had not been named.

“It burned up right to the waterline in the middle of the night; nobody saw it,” said Mayor Kirk Larson, a fishing fleet owner at Viking Village. “By the time the fire company got there, there was just 6 inches stuck out of the water.”

“There was some fuel in the water; it was boomed and contained” by the U.S. Coast Guard, Goez said.

A Coast Guard representative said Monday that the Coast Guard was not initially called to the scene, “but we did have the marine science tech come down from Sector Philadelphia.”

“The boat got removed and is at the commercial dock,” Goez said.

An investigation by the state police was still ongoing late Monday afternoon, and no further update was obtained by press time Tuesday. —M.S.

So, I'm walking up to my friend's apartment and ... Uh, I'll come back later.

Thanks for the follow-up....