Below: Hang in for a fog-over ... or outrun it back to the docks?

Tuesday, November 03, 2020: I blog in here for fun, i.e. mainly a form of R&R for me. When there are few blogs a-flow, I’m plastered with other things to do, like a job(s). As has been said: I thought I wanted a career but it turns out I only wanted a paycheck.

As with all good, bad and in-between Americans, I await the election results – and, far more significantly, the results of the election results, meaning what will transpire. I’ll bet the farm that any and all results will spark protests, especially for looters still trying to fill their Christmas gift list with heisted goodies.

Being unusually political – which is really not me – all those looted items are paid for by you and me, thus my balking at the leaders who give commands not to arrest looters. They’re being mighty cavalier with our money -- and surely encouraging repeat lootings.

Sidebar: Homeland Security and the FBI are reporting well-organized groups behind lootings, to the point they're seeing "looter caravans" crafted to quickly move in on chosen loot zones, where their surveillance has found little or no police presence.

Craftily, these organized crime rings also alert non members to a targeted area, using the public as both decoys and confusion makers. What's more, the more folks involved in a looting event, the more likely the authorities will stand down.

It's already been proven that the looting cartels target higher end items. This can be seen in the initial stages of the break-ins when the pros quickly and knowingly rush to pre-chosen items, i.e. those most readily and profitably sold on the open/black market.

Reading the above, you wouldn’t know I’m the same upbeat writer who led his weekly column thusly:

"Even with the age of uncertainty blowing in the (Bob) Dylanesque wind, our Island has brazenly settled into a fine example of its traditional offseason quietude. Surprisingly, it’s not nearly as overly jam packed, people-wise, as was first feared. However, an ongoing free-range cyber existence allows folks to spontaneously show up. This might become populously apparent during the upcoming holidays. But, for now, surfcasters and sand-top strollers can find wide-open beach terrain. So, fellow solituders, grab a rod, join the 66th Annual LBI Surf Fishing Classic and enjoy the surfside seclusion." I stand by the concept of LBI being geographically and, to a lesser degree, socially sequestered. In the same sea-fresh breath, I also sense that, worst-comes-to-worst, we won’t be taking a cavalier backseat approach to uprisings should they arrive here from any source. Nor, hopefully, will our police.

This is not a call to arms, far from it. Peacefully protest all you want. It’s simply a warning to keep violent social uprising crap outta here. Hey, even Switzerland has a very well-equipped army, with compulsory military service for male citizens. In fact, after their basic training and service, Switzerland males have to maintain their skills by spending several weeks in the army each year. TIME FOR FRIENDLINESS?: Unable to shake the sure-to-linger impact of this election, I have my doubts that the social media wounds inflicted among alleged friends will heal overnight. The tensions that have flooded our local domain could take months to drain. I intend on blotting chides and insults of a Facebook ilk clean out of my mind. Herein, I hope to have more and more fun things to think and write about, egged on by a very mild get-outside month of November. Be nice ... i.e. 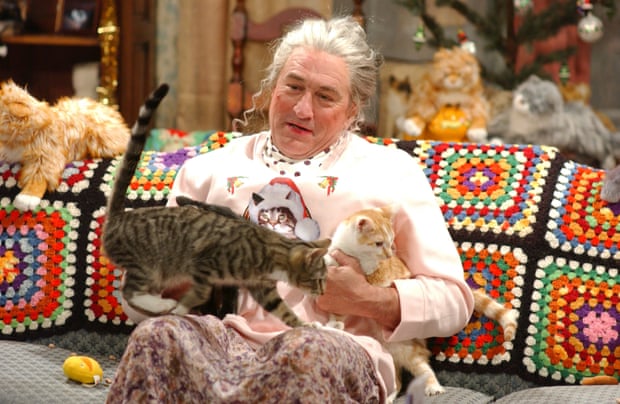 BUGGY BANTER: Which leads me to Holgate, where I’ll pass on buggying word that the far south end beach has been well served by heavy rains and hard winds. The torn-up sand has been smoothed and is quite easy to drive, especially with the upcoming afternoon low (to blowout) tides offering solid near-water wet sand to use. Just make sure to give huge leeway to beachcombers. And wave to them. It makes for good relations. 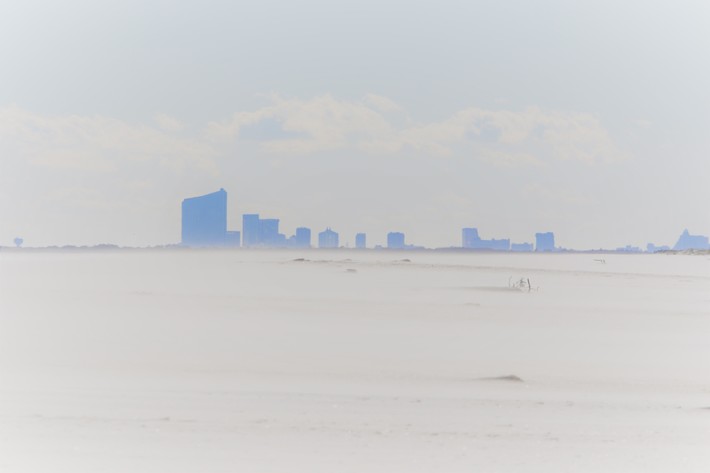 Not so smooth bayside: 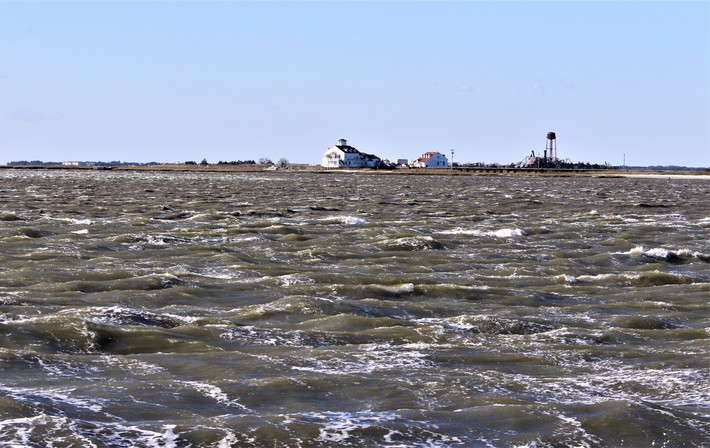 Enforcement note: Do not drive over to the bayside of Holgate. Tire tracks indicate somebody has driven across Wilderness Area sand to reach bay mud. Keep in mind that bay mud is as corrosive as acid on a buggy’s undercoating. I kid you not. What’s worst, the tenacious mud stays caked solid even through normal rinsings. It’s a recipe for rust cancer.

YOTE SPEAK: Thanks to two fine folks who sent me word (and a photo) of a truly healthy coywolf. Below is the look. I realize it is furred up for winter but just its height tells me it has a touch of wolf in its lineage. It seems to be a male. Dune fence ... no problem. Photos via Timothy Boyle. 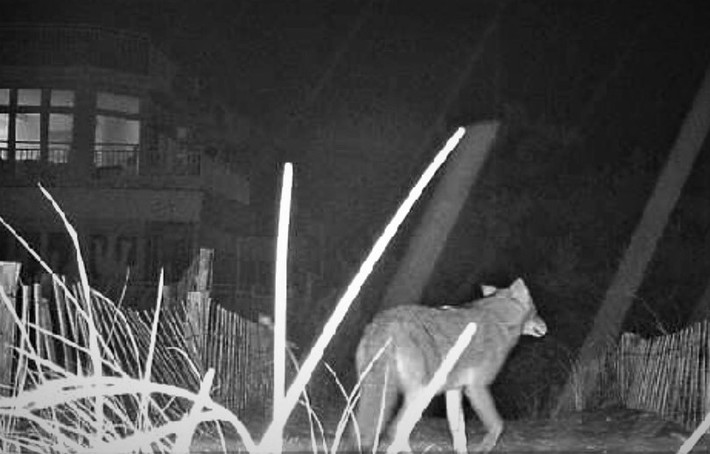 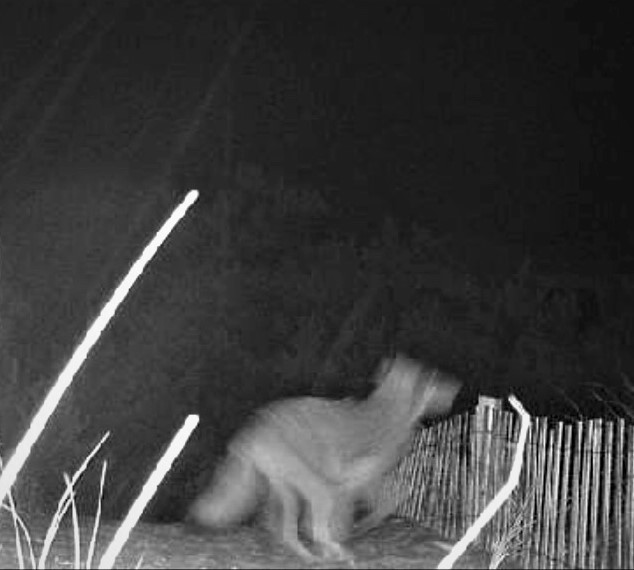 Below: Poaching goes on.

New Jersey Conservation Officers Association
tSoefiOploSuctonbcehsumr s3e0mdo art 10:ots0S0r tAetMdi  ·
On the evening of August 22, 2020 CPOs Moscatiello and Henderson were working the railroad bridge between Point Pleasant and Brielle. Having located a group of several fishermen on the bridge the officers set up surveillance. On this night they came prepared with newly acquired FLIR handheld thermal imaging units. CPO Moscatiello recognized one fisherman in the group as a repeat offender
and observed him throw several fish back. The officers decided to make their way down the train
tracks to see if they had changed their ways. CPO Moscatiello inspected the first fisherman and
located two undersized striped bass in his backpack. CPO Henderson then made his way further down the tracks and located a bag with nine striped bass, eight of which were undersize. During the interviews the original fisherman that CPO Moscatiello inspected admitted to keeping all eleven striped bass. He was issued court mandatory summonses for possessing ten undersized striped bass and ten over limit striped bass.
(((((((((((((((((((((((((((((((((((((((((((((((())))))))))))))))))))))))))))))))))))))))
What is wrong with some people!?
CPO McManus assisted South Plainfield PD with a case involving the destruction of turtles. South
Plainfield PD received a call about a fisherman that was using a hatchet and breaking the shells of multiple turtles. As a result of an interview the fisherman stated that he was killing the turtles because they kept stealing his bait on his fishing line. In total two red eared sliders and a snapping turtle had their shells destroyed and tossed aside. The fisherman was charged with animal cruelty and taking non-game species.
Below: Saturday night after midnight on Nugentown Road. Likely suicide effort. Driver of this vehicle is ultracareful with deer all over the place. Somebody less careful -- or muddled by booze -- a and this would have been hideous. The boy soon went to th side of the road but then went after the driver in a threatening manner, with something in his hand. Police came, eventually. No word on what this young man had rattling around in his brain cavity.

This full-blown Karen over in Pennsylvania is trying to roust a a group of visitors at a state park. It's bad enough she's profiling minorities but when she implies that the Jersey Shore is where one goes when unwelcome elsewhere pushes things far too far. To use the meme of the day: "What is wrong with some people!?" 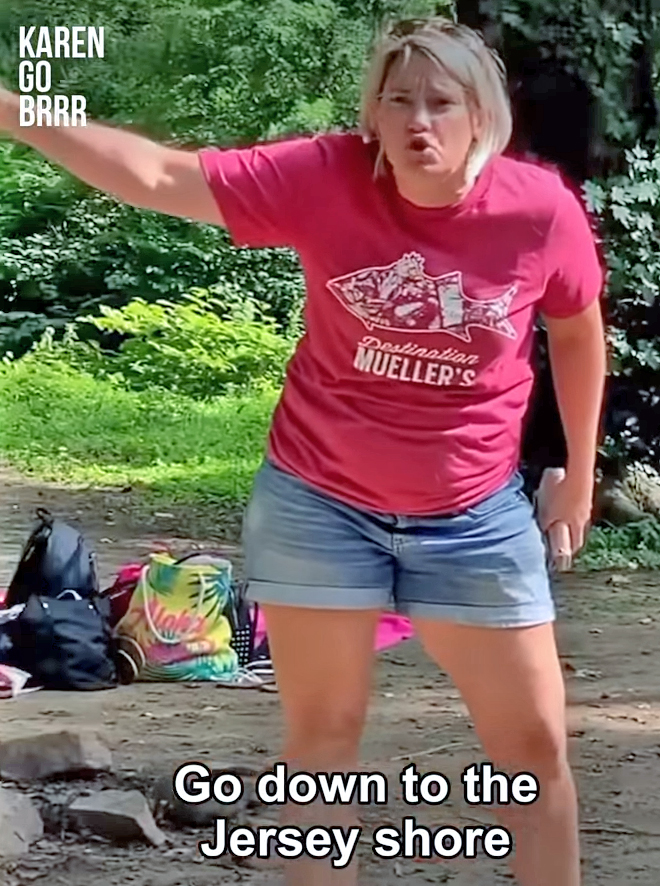 Fishermans Headquarters
Da Boyz got into some good ones yesterday afternoon! Store staffers Paul @pooch126 and Willie @willi3_ftwd got some quality ones on light tackle fishing @hogyfishing lures. The classy ones are getting closer to our home port every day. Soon we’ll have em but until then a trek north will be well worth the time and fuel. #stripedbass #bassfishing #bigbass #stripedbass #fishing