"It seemed like such a good idea when I first tore the bag apart. Now how am I gonna clean this all up before she gets home?"

Tuesday, March 15, 2016:  (Part of weekly column) Spring fishing action is running a bit early. There are already striped bass down at Graveling Point and up the Mullica River. 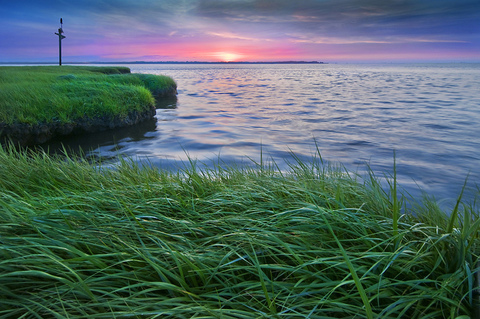 Weirdly, the Mullica is seeing pods of bunker like never before. These are the bigger bunker, with some peanuts mixed in. Might bass will be hot on those river bunker remains to be seen. I noticed the Mullica's assorted “landings” and bridges are being worked by anglers, mainly bridge-toppers. I know of one landing that is great for early-season plugging. Kayak anglers should do some exploring, just watch for fairly brisk outgoing tides. You gotta make sure you can get back to where you put in at. Congrats to Dylan O’Connell, age 8, for his 7.83-pound, 29-inch bass, taken on bloodworms. It’s the first Graveling Point keeper of the season -- and winner of Scott’s Bait and Tackle Shop’s Annual Spring Run Striper Contest. A $100 in-shop gift Certificate goes with that feat. The striper was caught Saturday at 4:15 PM, on a low tide. It was a one-and-done fish. Per Dylan’s dad, Greg, “One bite, one fish. No other activity reported.”

Dylan’s bass came with a slimy after-price. “An hour before catching his legal-size fish yesterday, Dylan made the comment ‘If I catch a keeper I'll kiss it.’ In true older-brother form, Ryan made him honor his comment,” said Greg. A photo was snapped as Dylan puckered up and putting lips to fish. Then, in ongoing older-brother form, Ryan mashed his brother’s head into the slimy fish! Paybacks are a you-know-what, Ryan.

Info gleaned from Dylan’s fish came via its belly. “Was kinda surprised to see five to six peanut-sized bunker in its stomach. I know there's some adult bunker around … but peanuts?” said Greg.

On LBI, the bay already has bass. Night fishing is decent (not great) in Barnegat Bay, down through Little Egg.

Big bunker are showing in insane numbers beneath the Causeway bridges. Problematically, there is little to no allowable bridge-top fishing from any Causeway span due to construction. Pathways under the bridges are still somewhat usable. Word of bunker advice: Know what you’re doing if you throw net on those schooled up night bunker, showing under lights. If you were to manage a throw smack onto them, the heaving net-load of bunker can drag you in. I know.

You’ll actually be able to register the first bayside passage of seasonal bluefish when every single bridge bunker is gone in one night’s time.

Speaking of bluefish, they are already in Jersey waters, though highly hit-or-miss. It’ll be interesting to see if we have an absolute invasion like last spring, when we saw blues, of all sizes, like no spring in recent, or distant, memory.

Some of the Facebook pics I’ve seen of the early-arriving blues show large fish – very atypical. For decades it was cocktail-sized blues leading the northward migration. Global warming working on our behalf?

There are upcoming public meetings regarding the Causeway bridge work for the spring and summer. I’ll hopefully be able to find out if there is still a working chance for a fishing section on the new spans, most likely at the Hochstrasser trestle bridge.

As you might know, any cost overages mean that amenities, like a fishing pier, are sacrificed. That’s not saying I’ve heard of any such cost overruns but odds are good there will be some. A little angler commotion over the nixing of a fishing section might keep it in the final plans.

There is no doubt the Edwin B. Forsythe Wildlife Refuge phase of the Causeway project will happen, big-time. Huge amounts of work have taken place on south Cedar Bonnet Island, the refuge’s property. A goodly amount of the heavy earth moving there is aimed at creating a natural environment for folks to hike and birdwatch back there. I just hope the current work is done very soon, we already have shorebirds returning. In fact, all the exposed sand there will surely entice piping plover. If so, no work can legally take place.

Below is a read from NJDOT headquarters. You've likely seen it before but you might want to re-see it.

"The NJDOT has awarded a
separate contract for construction of environmental
mitigations needed to comply with environmental permit
conditions for the entire Route 72 Manahawkin Bay Bridges
project. The NJDOT, in collaboration with the US Fish and
Wildlife Service, is constructing the restoration of a previous
dredge disposal facility at the Cedar Bonnet Island Unit of
the Forsythe National Wildlife Refuge which will include
wetland creation, mitigation for freshwater wetlands,
intertidal/subtidal shallows, and riparian impacts. Also
included are public access improvements such as public
parking and new interpretive pedestrian walking trails to
provide improved access to the Wildlife Refuge and provide
residents and visitors with additional passive recreation and
tourism enhancements."

I’m still very supportive of the Cedar Bonnet Island reclamation effort. I personally saw that sedge island buried beneath dredge materials, meaning its true nature was lost in the muck. This repair effort is a case where mankind can atone for earlier damages. It can also become an exceptional bird-watch zone, based on the birds I saw back in the day, prior to phragmites emerging from beneath the bay-mud spoils and attacking all other plant life. Admittedly, it might not luxuriate in many summer or year-round species but come fall migration … yowza.

I’m going to assuredly guess that dogs will not be allowed on the Cedar Bonnet Island refuge area.  Sorry. I’ve often been asked about that.

This gal comes highly recommended .. by me .... and many others. Tracie Lynn Scherer

"Bunkah" 3t ... Slowly getting my Arsenal ready for this upcoming season! Hey Bob, just need to know where to send it.