"Do the terms 'germs' or dog breath' strike a chord with anyone in the room?"

Tuesday, June 30, 2015: (Late day) Just like that, the ocean water is clean and blue/green. And just as quickly the winds have chopped in out of the south, pushing 20 knots.

Some of the boats that went ocean, midday, had to snot their ways back in. There are also some foreboding clouds off to the west. We’ll see storms overnight, then west winds by tomorrow.

The rest of the week and into the holiday weekend looks very moderate, both temps and winds. There is no scalding hot air, as is often the case for the July 4th weekend. Not that many years back, we hit a July 4th high of 103 degrees – on the Island, much less.

If you have any designs on fishing on a charter or headboats this weekend, you had better sign up instantly – or already be signed up. Above: "26 inch 6 lb fluke caught off of buoy 110 right outside of Holgate Marina by the Kristofick Family" One of the first houndfish of the season taken ...

I was checking out a picture of a smaller Seadoo a buddy of mine bought and pimped out for fishing. It has a special seat, aluminum rod holders and secured tackle boxes. Very sweet. It can drift over a mere foot of water. (He asked that I not show a photo of it ... until after his birthday since his wife bought him some extra goodies to go on it.)

No, I’m not going all PWC-happy – and neither is he. He put it precisely by saying, “It’s a boat I can afford. I can easily trailer it and put in the water. It’s amazing on gas. … And it doesn’t throw a large shadow when drifting.” 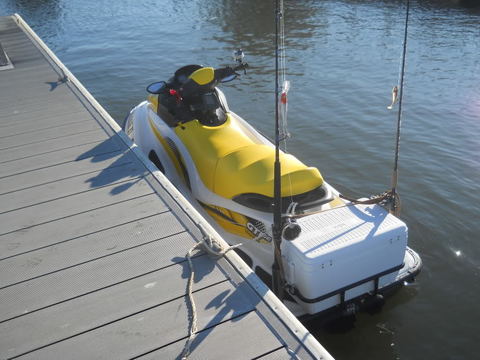 Sounds great, though the final cost wasn’t nearly as low as he first had me thinking, i.e. I won’t be zipping out and buying one over the weekend. Once modified for fishing, the final cost was pushing the price of some new (smaller) cars.

Get this: The 41-year-old North Carolina gal that contacted a Nissan Pathfinder, as the SUV pulled onto Long Beach Boulevard in Harvey Cedars, is being charged for illegally biking on the wrong side of the street. I'm betting more than a few folks will agree with this. The driver will not be charged. The biker was medevacked, based on possible head injuries.

Below: Dashcam catches this nonfatal car-on-bike hit, proving girl ran into car, not the other way around. 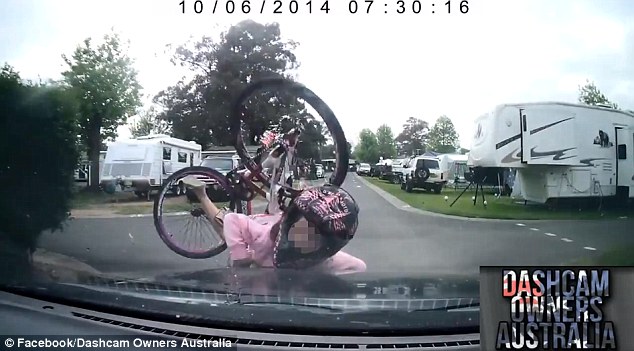 I can’t emphasize enough the usefulness of dashcams. Yes, this accident went the way of the doing-nothing-wrong driver but it simply doesn’t always work that way. Even a cheaper dash cam would have captured the side view of the bicyclist approaching. It would also show the proper stop made by the driver in this instance.

No, I have no stock in dashcam companies, I just see the hideous way guilty folks – and even usually honest -- lie through their teeth to stick the other guy with blame. 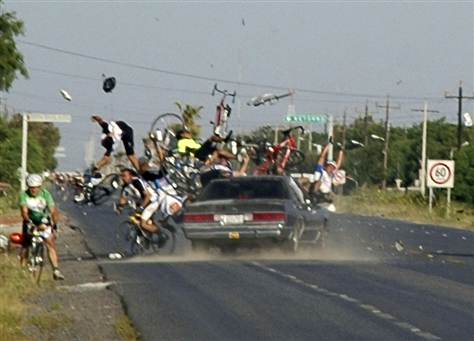 Here’s an oddish suggestion from within this otherwise always-normal site. Think about folding in your vehicle’s outside side-view mirrors, especially if you park roadside on the Boulevard. It’s that or pay the mirror-repair piper.

There is an industry move toward larger – more seeing – side-view mirrors, especially outside SUVs and trucks. Even sedans are going bigger on side mirrors.

The only way to hike the seeing capacity of outside mirrors is to enlarge them and/or mount them further out. You’ve surely seen some trucks and SUV with outside mirrors sticking way out – mounted on arms that like erector set pieces.

Per insurance folks, the incidences of mirror-on-mirror hits -- between moving and parked vehicles -- has exploded, as have the costs for replacing these now-costlier mirrors.

I know of what I speak, though mine was taken out by a too-close tree in the woods. It was a wallet-swacker. 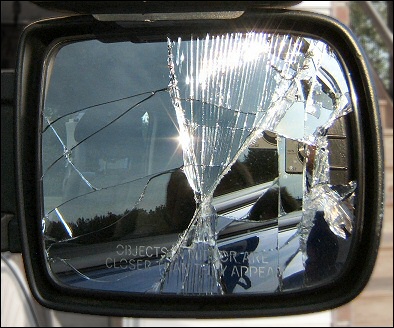 I should note that even though a mirror-on-mirror collision is technically an official auto accident, it’s a too-common practice for a driver to swipe and scoot, figuring it’s a draw since both mirrors got whacked. Such a flight is illegal, even though the cost of the collision allows the two vehicle owners to exchange info without a police presence. Leave the scene without tracking down the owner of the other vehicle – or without leaving the famed informational message -- and you can technically be charged with leaving the scene of an accident.

Anyway, more and more folks are folding in their mirrors to avoid coming out of a restaurant to find $500 in smashed mirror damage – and a note that reads “People think I’m leaving my name and address … but I’m not.”

Also, we of a truck-owning ilk, need to be doubly aware of protruding mirrors from parked vehicles (along the Boulevard) since our own mirrors are sticking out like sore thumbs.

SHARK POINT: I was advised that there are similar odds between winning the biggest lottery and getting bitten by a shark when swimming in the ocean. That either means you should run straight from being attacked by a shark attack to play the lottery, or, after winning a few hundred million bucks in a lottery, you shouldn’t go near an ocean ever again. Hey, I gave up on math when the alphabet started entering onto it.