Tuesday, June 16, 2015: The west winds have moved in, late-day. Waves are tiny and the water is clean. By tomorrow, I’d suggest some beach fluking, mainly early day (off shore winds) and after 6 pm (light onshores.).

Bassing is already down to an occasional resident bass near rocks. A round white jig (3/4 oz) with white bucktail and a white plastic tail will almost always attract any singular stripers. By Wednesday night we’ll be back to southerlies and then swing back to west. By the weekend we’ll be into a south flow, with vigor by late Saturday.  Per usual, pick your surfcasting and boat fishing sessions.

By the by, we have exceptional charter boats fishing the bay, inlets and even the ocean. If you want to go a tad larger, take in headboats in Beach Haven or in Barnegat Light.

Tell them I sent ya. I like getting reports from those pros.

Below: This is not photoshopped. It's just cat-weird.

Below is a teaser segment from this week's SandPaper weekly blog, known as "The Fish Story." You might want to take into account that a "Fish Story," by definition, can mean a load of fishy thing -- not just fishing-related. Just sayin'.

Below: A fairly easy to ID bull shark.

SHARK BITE FRIGHT OR, BODYBOARDS FOR SALE: The shark biting of a couple kids in North Carolina hits a little too close to home, by my bullish thinking.

NC simply isn’t all that far off -- as the shark flies. That was proven by the much ballyhooed great white, Mary Lee. Her transponder pings proved the resolute traveling habits of many gray suits – an oddly effective expression for sharks, bandied about in Australian and South African. 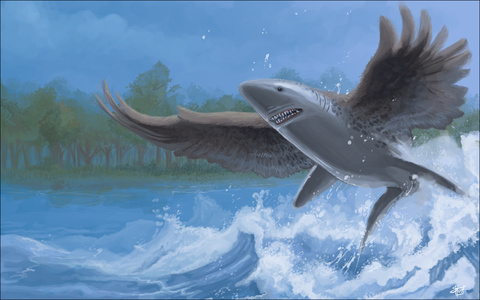 To be sure, an on-the-move shark can travel tenaciously, 24/7. An NC shark can reach NJ damn near overnight.

As to those ugly NC bites, myriad shark experts are scrambling to modify and adapt their shark theories, hell-bent on placing this headline-making shark conduct into some complex cause-and-effect template.

My explanation to the bitings is sophomorically sound: They happened for whatever reasons they happened. That’s a double-speak way of assuring that, when it comes to the gray suits, there are no certainties, no templates, as to why a shark, or sharks, might suddenly go gonzo on mankind.

But there are always those who want to attribute incidents like these to fit their mindset. For glowing instance, global warmists are swearing up-and-down that such occurrences are yet another sure sign of planetary upheavals. Per the “Global Warming Bible,” And it shall come to past that in the time of the great water warmth, sharks of gray shall rise up and begin biting people mulling within the sea.”

OK, so I’m being a wise-ass, but, global warmists are, in fact, claiming that shark attacks around the planet are being sparked by changing global times and temperatures. Per sharks-world.com, “Global warming has made it difficult for sharks to continue living their peaceful existence.”

Truth be told, it’s far from an epiphany that the warming of our oceans could rattle the shark realm. To be sure, sharks and warm water often go hand-in-fin. Warmer waters can surely spur shark reproduction -- though, even then, most species are slow breeders.

Getting a lot more scientific, surges in shark showings have to be part and parcel to the highly dedicated ways we’re conserving US sharks, including the bitingest and bullyist varieties? By all accounts, shark populations are percolating upward, led by America’s nearshore gray suits.

Staying sciencey, the surging shark presence and an exploding population of coastline humans have conjoined. It’s not necessarily a match made in heaven. Millions atop millions of folks stand ready to take a dip in oceans, bays and related estuaries – this summer! Bathing suits meet gray suits.

Along with more folks than ever flailing about in coastal waters, entire flotillas of beach bathers are flapping about atop showy flotation devices, especially bodyboards of many colors.

In recent years, attacks on bodyboards have proven, in all too living color, that these floatation devices offer a shark-attracting flash of color -- enriched by dangling arms and legs. When seen from a shark’s eye point-of-view, peopled bodyboards look identical to the average struggling something-or-other – something well worth a quick bite-and-see effort. Yes, I’m purposely emphasizing the bodyboard. Studies done on shark-bitten bodyboards clearly show the boards themselves were very likely the main target/entrée. The mauling of dangling human limbs was done instinctively, as a means to first disable the curious prey. 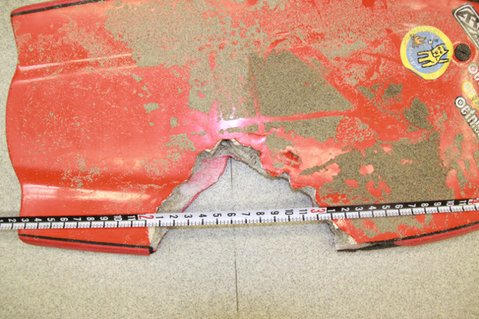 I’ll offer a little shark researcher minutia here by noting that the biting of a human by a shark is routinely documented as an “accident” not an “attack.” That is done to maintain the soothing notion that sharks seldom knowingly attack humans – though they’ll bite the ever-lovin’ crap outta them by mistake.  At what point should that somehow make me feel better? 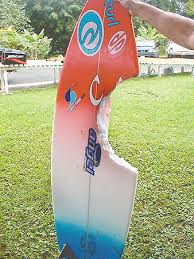 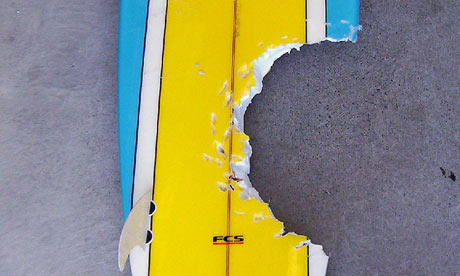 THE LATEST ACCIDENTS: The two kids accidently bitten in NC both lost arms. Both bites happened near Ocean Crest Pier, on Oak Island. Tellingly, both attacks occurred only hours apart, pointing toward a lone biter, what some call a rogue shark.

Below: Female victim is stabilized on the beach. I’ll guarantee, here and now, that I know the ID of the not-yet-done culprit. Despite no actual sightings of the attacking shark, the dirty deeds smack of bull shark.

The bull shark is a nasty-ass gray suit that loves shallow and brackish water – and doesn’t give a ratfish’s ass about any bite-no-humans directives within the shark realm. Somehow “Badges? We don’t need to stinkin’ badges …” jumps to mind.

Below: Boy after being bitten and brought ashore. I was a bit put off by Oak Island officials exaggeratedly noting that the nearby Ocean Crest Pier is “heavily fished” and “bait was likely in the water, which could have attracted sharks.” The pier has been fished for decades. These were the island’s first shark bites on humans.

Now, I’m going to offer something that will lead to a revocation-of-privileges from all area chambers of commerce. I fear something accidental this way cometh. First of all, an NC bull shark, even when nonchalantly following its nose, can reach here in nothing flat. This time of year, nearshore sharks tend to move south-to-north, following foodstuff, especially stingrays.

Here is something pretty special and cool. Ever wonder if you have caught the same fish twice ? I have been tagging for the Berkeley Striper Club for a number of years now and it was a goal of mine to accomplish this. Well, check it off the bucket list not once but twice this past April. This first fish I tagged in Oct./2013 and the other was tagged Nov./2014 - I re-caught both fish within a week of each other in the same Location where they were originally tagged and caught on the same lure they originally hit when first tagged. Both SB were shorts and of course re-released to continue their journey. Thought this was interesting and something you guys would like to hear about. 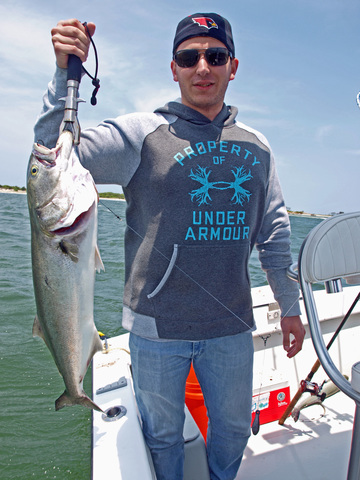 Well the water temperatures finally started to settle down from last week’s wild swings.  Ocean is in the low 60s and the bay is in the low 70s.  There are still BIG bluefish hanging around the inlet as well as the backside of the inlet.  I had the Anthony Conti crew from Ridgewood, NJ get into some of the action.  My mission was to get Anthony’s 21 year son, Matthew, his first fish.  With the crew boxing two tasty fluke to 22” we then concentrated on bluefish.  The bluefish did not let us down as the gang caught several that went from 7-11 pounds. Here is a picture of Matthew with his fish ever. There are still lots of schoolie stripers to play around with when the tide is right.  Bucktails, BKDs, clam and sandworms have all been effective.  Some days they are feeding even when the sun is bright.  Sunday morning my wife Deb and I fluked off of Waretown.  With absolutely no drift we power drifted and had steady action with shorts and one keeper for fish tacos.  School ends this week so I will be guiding all week long through the summer.  Trips are available anytime of the day. If you want to try something different this summer I will be doing off the beach sharking trips targeting brown sharks on light tackle.  Talk about fun!

On the nature side: diamond back terrapins have been very active since the bay water warmed up.  They are the only species of turtle worldwide that lives in brackish water, like Barnegat Bay. Although Betty Reid Soskin has recently received national attention as the country’s oldest active national park ranger, she’s not resting on her laurels: she’s still got important work to do, and she says she’s got little time to waste. Three times each week, Soskin, 93, interprets the country’s history at Rosie the Riveter WWII Home Front National Historical Park in Richmond, California.

“I try to reinvent myself every decade,” Soskin once told TV host Arsenio Hall. To which Hall replied, “That kind of makes you the Madonna of park rangers,” drawing laughs from the crowd and from Soskin herself.

In fact, Soskin laughs frequently—giggles, really—which is testament to her optimism and still youthful outlook: From her first job in 1941 as a 20-year-old clerk in a Jim Crow-segregated union hall to serving as a member of the California State Assembly, to becoming a National Park Service ranger at 85, Soskin views her trajectory as analogous to the country’s.

Soskin, who served as a consultant early on to help shape the park, sees herself as a truth teller at heart, and though she never worked on a production line as a riveter, she views her history as relevant to the park’s mission, which is to explain the narrative of how the country hung together during the trying time of World War II. Soskin’s great grandmother was born a slave and died in 1948 at 102, and her mother lived to be 101. Soskin attended Barack Obama’s 2009 inauguration with a photo of her great grandmother in her breast pocket, standing in the shadow of the Lincoln Memorial.

“All of that American history, slavery through reconstruction, Plessy v. Ferguson, the Scottsboro Boys, and the First World War and through Black Lives Matter...all occurred within the lifetime of three women who were adults at the same time,” says Soskin. She remembers how the country faced down the threat of fascism, and she believes those lessons can serve us today.

“I realized that we can use those years as a template to ensure our grandchildren will have a livable planet. I think we’re on the right track. I really do. I just wish I were going to be around longer,” she says, again, with another laugh.

When asked what she’s learned thus far, she doesn’t hesitate.

“Never be satisfied with answers. There are always questions beyond the answers, and that’s where life is the richest.”

Awful about the kids, but the one more of these and the press will be comparing the east coast to South Africa's swarms of sharks. You know how they are these days.

Accounts by Surfertoday.com place fatalities in Australia first, South Africa second and USA third. Florida, 11 and California 10 along with about 5 others.  Nearly 150 in Australia , 54 in South Africa. Ichthyology has similar stats.