Yet another reason why it's best not to let uncles babysit. ... Tuesday, July 25, 2017: Wow. That’s cool. I’m talking about the weather. Talk about busting a heat wave. And many days to come should keep thing coolish – or at least not scaldingish.

With the temp drop, I’ll finally get in some archeo-digging. Hey, it’s good to get off the Island every now and again. I play very nicely with the mainland, always have. In fact, I’ll be stopping by a couple highly hard-to-reach cedar creek holes, where I’ll slide in and let the healthy ferric and tannic acids of the pinelands water wash over me. Hell, there are entire resorts based on less restorative waters. 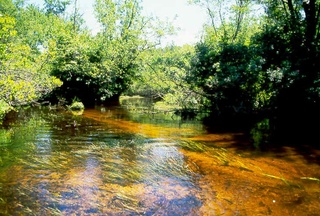 How about that 30-foot shark that some daring man grabbed -- and rescued -- in the shallows of Beach Haven?

Oh, wait. My bad. It was actually a 3-foot shark. You can understand my confusion, seeing that the entire Eastern Seaboard news media realm mainlined the video of the fellow grabbing a harmless, half-dead, dogfish -- to the cheering delight of an entire Queen City beachful of mesmerized onlookers.

Overall, it was a fine and humane effort by folks trying to save the doomed denizen of the not-so-deep; dogfish being a pesterous beachline bait-stealer of the highest order for surfcasters.

Note: There’s a chance it was a small brown shark. I’m sticking with it being a dogfish, also called a sand shark.

Coincidently (or was it?), the acting-oddly sand shark just happened to come calling in perfect conjunction with the Discovery Channel’s “Shark Week” celebration. What’s more, I caught wind of some men-in-black jumping out of a dark Discovery Channel Chevy Suburban SUV and running something down to the ocean’s edge -- throwing it in the water off Nelson Avenue. Not that it meant anything, mind you.

Without being smarmy, I must now make a typical Mannservation Mann observation). The kindly fellow who grabbed the shark – and I again salute him -- couldn’t have grabbed it in a worst place, short of grabbing it by the tail, where a true shark can act out and chomp a grabber’s body to the quick. The man’s squeeze was right where all sharks have unusually delicate innards.

I know, you’d think a killing machine would be rock solid through-and-through.  Nope. A shark’s internal organs are so iffy that one can die of internal damage if dropped by an angler, or, if accidently kicked in the abdomen – you know, whilst we playfully roughhouse with, say, a 20-foot great white in the surf. Come on, it’s shark week! Catch the spirit.

The manly vise grip applied to the Beach Haven’s shark’s lower region, as the top half of the creature swung back and forth, was likely the coupe de grace for the already fading-fast fish.

Nonetheless, the happy-ending aspect, as the shark was being PWC’ed off to be joyously released in deeper water, was the stuff of media and vacation fairytales. I sure liked it a lot better than the finding of a washed up, mint-condition Paleolithic artifact -- rolled along in the wash for miles and still sharp enough able to cut through deer skin. I hear it’s now in the Smithsonian’s “Ginsu” display.

BIG GAME TIME: Even though the winds are still whipping out of the NE as I sit here at work tonight, they should be laying down fairly rapidly -- and remain non-aggressive for competitive offshore fishing folks, closely eyeing things up..

Check out what begins with tonight’s captain’s Meeting:

Oldest Tournament of Its Kind in the Country

Sign up soon, as the number of participating boats is limited to 100.

As Karl Anderson explains on the event website, the tournament was “the brainchild of Captain Joe Bossard, who ran club member Bob Gaskill’s Bee Dee. Bossard had been fishing up and down the coast, spending time from Manasquan to Florida and then coming to Beach Haven, so he had the connections to attract anglers from up and down the coast.

“Many early club members had also been fishing up and down the coast and invited offshore anglers to come to Beach Haven to sample the good fishing. Awaiting them was a nice clubhouse, great meals each night and good camaraderie with a group of dedicated offshore fishermen.”

Anderson adds, “The White Marlin Invitational fishing from the historic sportfishing port of Beach Haven remains a favorite event on the schedule of tournament fishermen. Despite shoaling in the inlet and the shallow bay, the clubhouse is still a hub of activity during the event and always a welcoming beacon to visiting anglers from up and down the coast.”

Tournament director David Ridley announced a few changes for 2017 “that will build on 47 years of tradition – while introducing some new options in response to your feedback – further solidifying our tournament as one of the preeminent offshore fishing events on the East Coast.” Departures will be allowed from any inlet in New Jersey this year, and anglers will be able to utilize a second weigh-in station, at Hoffman’s Marina in the Manasquan Inlet, in addition to the BHMTC.

“We have also added a day, so participants pick two of four days to fish,” said Ridley.

“This tournament is still one of the most affordable on the East Coast, with registration fees ranging from $700 to $1,000 depending on registration date and size of boat,” he noted.

All 48th Annual White Marlin Invitational rules apply, and all International Game Fish Association rules for fishing and tackle will apply unless noted otherwise. Any amendments to the rules will be announced at the captains meeting 8 p.m. on Tuesday, July 25, at the BHMTC. Each boat entry is strongly encouraged to have a representative attend the captains meeting; however, it is not mandatory. Rule changes will be posted online at thewmit.com prior to 11:59 p.m. on July 25.

Although boats may depart from any New Jersey inlet, they must return through one of the following five inlets if weighing in a fish at BHMTC or Hoffman’s Marina: Manasquan Inlet, Great Egg Harbor Inlet, Atlantic City Inlet, Little Egg Inlet or Barnegat Inlet. Boats not weighing in fish may return through any inlet.

A maximum of three tunas, three white marlins, one blue marlin, one dolphin, one wahoo and one bluefin tuna may be weighed in per boat per day.

Saturday – the final day of the tournament – will feature food, drinks and live music at BHMTC, and an awards ceremony at approximately 9 p.m.

The Beach Haven Marlin & Tuna Club is located at 420 North Pennsylvania Ave. in Beach Haven. For more information or to register, visit thewmit.com, email wmit@bhmtc.com or call Ridley at 908-963-5924. Information on treasure chest payouts and calcuttas is available online. —J.K.-H. 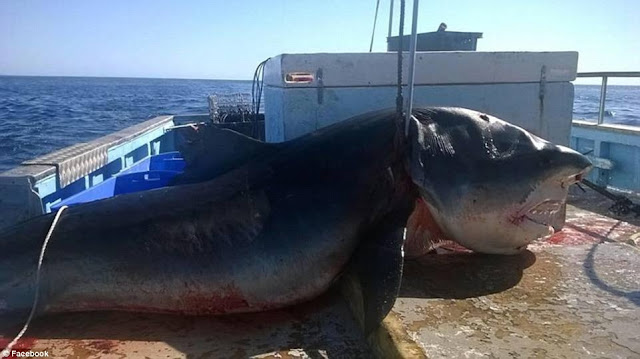 When Geoff Brooks from Byron Bay, on the New South Wales far north coast, posted these photos of a massive shark on his Facebook page yesterday afternoon, saying it was caught not far off the coast on the weekend, the internet went into one of its frequent shark-related frenzies.

Not only is the Tiger shark the very definition of the phrase "you're gonna need a bigger boat," but it was allegedly caught with a hammerhead shark
inside it.

Needless to say, this tale is fishy, and a number of key details are unconfirmed.

Here's the back story: Byron Bay is a popular tourism and surfing destination that has been the site of a number of recent shark attacks.

A fortnight ago, surfer Craig Ison was attacked early in the morning at Evans Head, south of Byron, and nearly died from a loss of blood after being bitten on the legs and arms by a great white. One of the shark’s teeth was embedded in his leg.

At the start of July, there were two attacks in 24 hours, leading to a major surfing competition being postponed, and in February, a Japanese man died after being attacked off Ballina, just 24 hours after another surfer was bitten at Lennox Head.

The Facebook post said the shark had been handed over to the CSIRO, but the science organisation told Business Insider that it didn’t have the shark and doesn’t know where the picture was taken or by whom. They confirmed it was a tiger shark, however.

A local newspaper, The Northern Star, spoke to a Tweed Coast fisherman, known only as "Matthew," who claims to have caught the shark about 20km off the Queensland/NSW border about three weeks ago.

He told the paper he was fighting a hammerhead shark at the time and the four-metre shark came up and swallowed it. Matthew said the shark he landed was “a little one”.

“I’ve seen tiger sharks 24 feet-long off Tweed,” Matthew said, adding that the number of sharks in the area was increasing.

He said the shark went to the fish markets, but the jaws were kept as a souvenir.

The boat Matthew works on is a commercial shark fishing boat.

Excellent write-up by Karen Wall for The Fisherman on that monster shark over the weekend. According to NMFS, current levels of catch for makos in the North Atlantic are considered sustainable, the stock is healthy, it is not overfished and the probability that overfishing is occurring is low.

An organization called the International Union for Conservation of Nature (IUCN) keeps a list they call the “RED LIST” to monitor plant and animal life around the globe – to make the RED LIST it’s required that an organism breath oxygen or carbon dioxide (anything that breathes is therefore at risk of future extinction according to this U.N. of conservation and breeding ground for rabid environmentalists.)

As for the mako, it’s listed as “VULNERABLE” which IUCN describes as meaning makos might someday be “ENDANGERED” – the global mako population could get healthier too, in which case IUCN would improve the listing to “NEAR THREATENED” which means the species is not currently at risk of becoming extinct in the near future but it could someday be relabeled as VULNERABLE. If you drive a CAR, you might be a CAR THIEF – or, if you own an AX, you might become an AX MURDER.

The only thing truly “vulnerable” in this vapid debate on sharks is the English language! 
HAMMONTON — Thunderstorms started and ended a fire inside Wharton State Forest that burned for five days.

Heavy rain from the thunderstorms that moved across South Jersey Sunday night and early Monday morning helped bring the fire under control and contained, according to Department of Environmental Protection spokesman Bob Considine.

Forest Fire Service investigators determined three trees including a large pine tree were struck by lightning on Wednesday night, setting off the blaze.

The fire continued to spread northeast of Basto Village until it was discovered at 1:20 p.m. on Thursday by an observer on a fire tower. It burned through 3,500 acres, with residents and beachgoers in neighboring southern Ocean County and Atlantic County smelling the smoke.

“While the cause of this fire was natural, a vast majority of forest fires are the result of human activity, whether made in error, out of negligence or by deliberate actions. Visitors to state parks and forests are encourage to follow safety protocols when traveling through or camping in or near these fire-prone areas,” Considine said.

State Park Police, New Jersey State Police, the Burlington County Fire Marshall and the New Jersey Division of Fire Safety all assisted in the investigation of the fire.

Read More: This is what started the largest Wharton State Forest fire in 10 years | http://nj1015.com/this-is-what-started-the-largest-wharton-state-fo...