LBI gangstas should take note of this latest street style ...

Tuesday, July 04, 2017: We’re already into the green lacewing days of summer. Lacewings are those dainty, oft lime-green flying insects – highly non-biting – that night around on big-ass wings. They’re the consummate sign that summer is underway, when found around left-on outside lights.

I bring them up since there’s one on my work wall, as I sit here (8 p.m.) putting out another major summer SandPaper. I’ll gently release it back outside. Hopefully, that will qualify as my good deed of the day. Yes, I try to do one a day, maybe two on Sunday – and I can’t include stopping for pedestrians along the Boulevard among deeds done right … and AC/DC cheap. 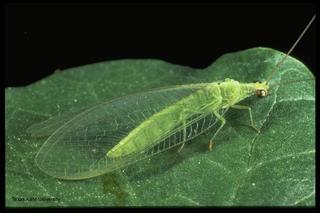 I guess should add that the larvae of gentle lacewings are described as "voracious predators of the eggs and immature stages of many soft bodied insect pests, including several species of aphids, spider mites (especially red mites), thrips, whitefly, leafhoppers, some beetle larvae, eggs of pest moths, and mealybugs."

They kick ass early in  life then lead a hippyish second half. I managed a quick foot-dip into the end-of-street (Surf City) ocean -- and the water is now amazing. Not so much temp-wise (67 degrees) but once again that immaculate cleanness, like we’ve been seeing every time the upwelling brownness get forced out of the system, is back and oh so purdy. I should note that there is some near 70-degree-plus water just offshore. Winds permitting – and they should – that warmer water will likely be here by late week.

But onto some moderately exciting angling stuff. In fact, I’ll show you first. 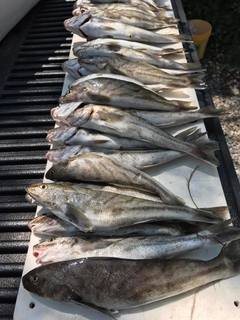 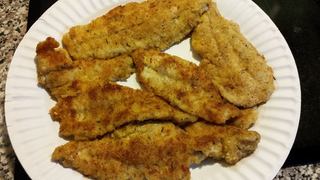 Brigantine is currently alive with kingfish. We all know these are top-shelf eating fillets. I rate them near five out of five stars, taste-wise. I see no way they won't swarm here, soon ... if they're not already around. The current calmed down ocean is ideal for fishing them.

Every 15 -- or maybe it's 30 -- years, NJ sees a total explosion of northern kingfish, though the explosions seemed a lot more regular in the 1940s and 50s. No olden fishing reports I've read failed to mention them in the surf.

I don't want to jinx it but these would make summer fishing a lot more fun -- both ocean and bay. Plus, they often hang around all summer, before really peaked again in early- to mid-fall. 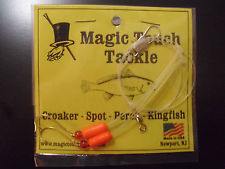 Moderate/light to light surf equipment is needed. Too heavy a rod/reel and there's no fun at all to catching them.

While most folks know kingfish-catching rigs, a scant few know it's best to go bank sinker with those rigs -- and even offering a slow retrieve, a bit surf-fluking-like. Then, once a prime retrieve zone is found -- and kingfish can really school up tightly -- future casts are aimed right at the hot spot.

While it's no different than most fish, kings should be kept cool and cleaned/filleted as quickly as possible. I bring that up since all too often they're chucked in a bucket and left in the sun to bake, seeing they're mainly a daytime hookup. Bad, very bad.

As to you bay fishing folks, already loving fluking life in the bay -- as flatties avoid that cold ocean -- arriving kingfish are on a bay spawning run, offering a different meat for the plate -- by my thinking, superior to fluke, hands down.

I must suggest, in the name of conservation, that a sensible one-meal amount of kingfish be kept -- and NOT as much as you can possibly catch. Over-catching of spawning panfish not only hurts the spawn but way too often leads to sloppier and sloppier filleting. Kingfish are way to good to leave chunks on the bones.

Since I'm on a kingfish roll, well-cleaned kingfish carcasses make exceptional blue crab bait. Also, kingfish heads are thought to be among the best bait for big black drumfish, striped bass, or channel bass, that last one coming from an old news article talking of kingfish used to catch monster "channel bass" on LBI. Channel bass are known as red drumfish nowadays.

I won't get into the relationship between shrimping bycatch to our south and the kingfish we finally see except to say newer exclusion devices are now in use ... and shrimping pressure has been iffy. Also, see below ...

North Carolina’s shrimp industry could face sweeping changes in 2018 following a controversial move to allow a 100-page petition filed by the state Wildlife Federation and the Southern Environmental Law Center to move forward. The 5-3 decision handed down by the Marine Fisheries Commission on Feb. 16 has the entire commercial fishing community braced for what could be a crippling blow to the industry.

The petition, now headed into the rule-making process, calls for all state coastal waters not already designated as nursery areas to be designated as special secondary nursery areas, in which shrimp and crab trawling would be prohibited except during open shrimp season. If approved, these regulations would shorten the number of days shrimp trawlers can fish, how much they can fish and where they can trawl in state waters.

The fact that North Carolina is the only state on the East Coast that still allows shrimp trawling in sounds and rivers is the battle cry of proponents of the proposal. But fishermen and environmentalists say management is doing just fine as is.

“The fact is, this state’s marine fisheries division is doing an outstanding job managing the fishery,” said Melvin Shepard, former president of the board of the North Carolina Coastal Federation. “That’s why we are still shrimping and doing very well at it.”

Jerry Schill, president of the North Carolina Fisheries Association, is disappointed but far from shocked.

“When the previous governor reappoints a former Coastal Conservation Association board member and a bully who has clearly violated our state’s open meetings laws, as well as appointed two CCA sympathizers to at-large seats, you know the deck is stacked,” says Schill. “That said, I remained optimistic because of the overwhelming [84 percent] vote of the five advisory boards to deny the petition in January.”

For one commercial fisherman attending the meeting, this latest move could have devastating effects.

“If these rules are implemented it will affect their ability to make a living shrimping,” said Albemarle fisherman Terry Pratt . “It will affect 9.5 million people’s ability to have North Carolina… shrimp and other seafood.”

Marine Fisheries Commission member Allison Willis voted against the petition going forward and said she thinks the proposed regulations in the petition “went too far.”

“I think this is such a waste of the state’s resources,” she added. “This is extremely discouraging to me.”

According to Schill, the petition represents a trend he says raises major concerns for the future. “Bottom line? Science be damned and full steam ahead for special interest agendas that would decimate coastal North Carolina communities,” he said. “What the commission did was cause for continued worry for thousands of families and a huge waste of taxpayer resources.”

There are also concerns about how the proposed rules would interact with existing rules. Fisheries staffer Trish Murphy said the proposed regulations would affect not just shrimp trawling, but also other forms of trawling, such as flynet, flounder and crab trawling. 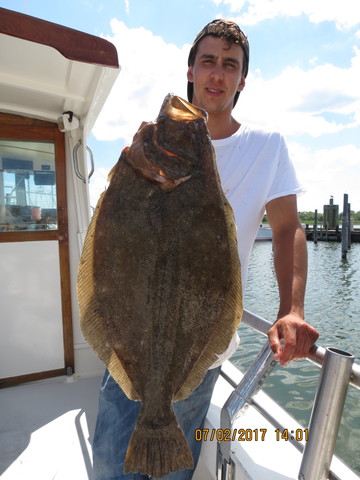 Nothing but redemption today had to make up for the first offshore skunk of the season yesterday with James Buonanno Jr.... disgusting feeling. Left again last night to fish some new waters to the south of us being not sure what to expect. Worked super hard in the cockpit and eventually hit the jackpot with not another boat in site. Absolute yellowfin mayhem....reels smoking, fish blowing water 10 feet in the air, spreader bars losing squids!! All bites came on Sterling Tackle bars including the new lateral one. The fish were heading north, looking forward to see what it materializes into down the road. 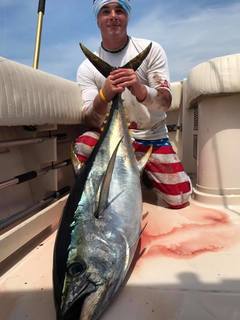 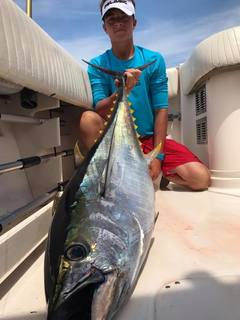