Tuesday, January 12, 2016: It hurts to get back into The SandPaper saddle again

Tuesday, January 12, 2016: It hurts to get back into The SandPaper saddle again, knowing I’m bound to write off into the sunset for the next 50 months. Just six-shooter me now.

I’ll again emphasize how often folks from this column and Facebook shoot me excellent story fodder. While it is occasionally newsy stuff, more often it is more general concepts, what we call “feature” material. When it’s about a certain individual, it’s called a “personality” or “profile” piece. Those can make for very powerful reading. There are amazing people quietly among us, many of whom you’d never guess have such wild life tales. For businesses, I always try to work local enterprise into the paper. Admittedly, it does help to run ads with The SandPaper, though I have highlighted many non-advertisers based purely on the originality or uniqueness of a business effort.

When it comes to fishing data, I like being Jay-on-the-spot when a catch is scale-shaking or involves young kids or gals.

At the same time, I always enjoy passing on, verbatim, professional reports from headboats, charters and such. I haven’t had great lines of communication with larger local headboats -- but maybe we’ll hook up this year. My only problem is I simply do not have time to take down such reports. Write ‘em up and I’ll post ‘em -- everywhichaway.

Last year was amazing for fellow anglers getting photos of catches to me. I especially liked the boat reports since I don’t get out there like I once did.

The only thing lacking in most reports were details. Oh, believe me, I don’t want to know the fishing spots, I kid you not. But, there’s something friendly and unselfish about sharing info about gear, fishing techniques, landing info and, especially, exact plugs and jigs. Hey, we’re a bit of a brotherhood in the angling realm, swapping how-to-catch info is all in the family.

MODERN ANGLING ART: If you’re wondering why I highlight so many handmade plugs, I’m blown away by the creativity and artwork emerging in the form of custom plugs, jigs and flies. And I'm a very discerning art aficionado. 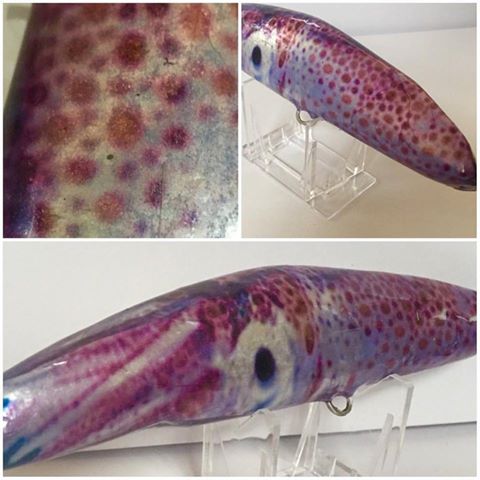 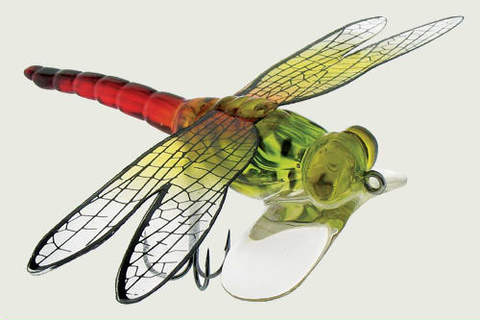 Flies remain in a creative domain up there with decoy carving. The new look of flies has now gone gonzo, especially on the realism front. Some flies look so much like the baitfish they’re meant to match that you can barely tell the difference when they’re placed side-by-side with the real thing. Amazing, A-Company! 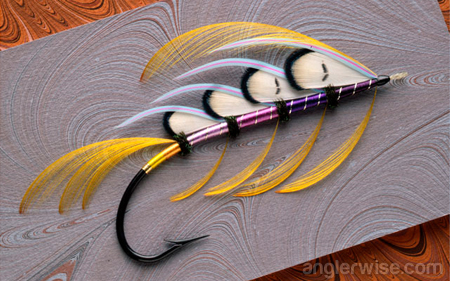 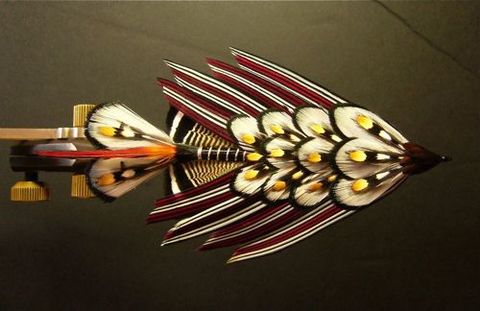 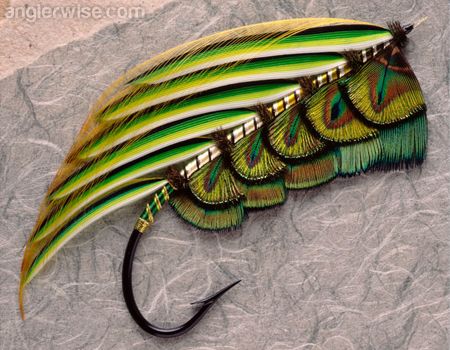 Gospel truth: I could see MoMA (Museum of Modern Art) featuring a show revealing the art of modern plugs, flies and jigs. I have to go up there soon so I just might chat with the curator about that possibility.

WEATHER WATCH: The west wind, cold fronts and eventual warm-ups are almost on par with normal winters. We’re heading into the uncertainty period I brought up last month, during the warmth. It seems things will remain strictly west-to-east with a dose of biting cold and wind followed by a drop off in the wind followed by oddish warm-ups – followed by the same pattern. Although it’ll be cold in a southern Canadian vein, I see no “polar” cold. Night temps will hang in the 20s, at worse. Day temps will approach 40. That is spot-on “average” for hereabouts.

The ocean has taken a dip. I took a couple infrared thermometer readings in the mid and upper 40s. First time I’ve seen that since last spring. The ocean is way too choppy for surfcasting. Tonight’s west winds will smooth it out – and could quickly calm things down for any wildmen wanting to try the suds for hake and such.

BUGGY BANTER: The next few days should be pretty decent for buggyists of any ilk. Hey, many beach drivers just want to cruise the sand with spouse and kids. Works for me. Hell, I cruise it to work -- though I often first go way south before turning around the grudgingly heading into the grind zone of my office.

I’m closely watching the arriving cold air but I really don’t think it’s going to freeze the sand surface like last week – when it was neigh impossible to drive the upper beach due to crusting. It will still be best to come on and off only at sturdier entrances/exits, like those on replenished beaches.

The upside is the upcoming way-low tides -- and the accompanying safe-to-drive wet sands. 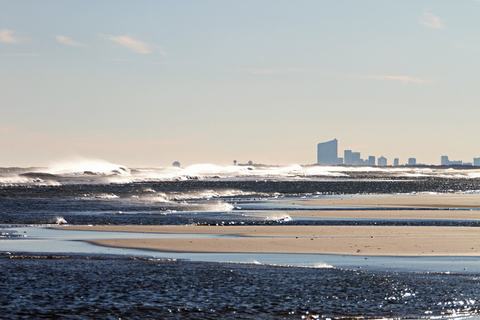 However (!), there is an ongoing red alert zone in Holgate, where the buggy sink potential is terminally awful.

From south of the 14,000 foot mark (approaching the last stretch to the Rip) and all the way around toward the west point, you CANNOT drive up near the refuge boundary, where the signs are at. This is a hugely  popular area for snowy owl lookers.

Below: My last winter shot ... right at the current sinky area. 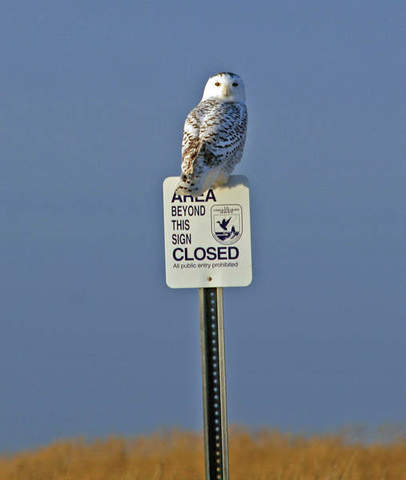 The last storm drove water all the way up to the vegetation there. Ponds formed, trapping water. The ponds have since been blown over with sand. It looks drivable but can be pure quicksand. It will likely soon be drying up but I wouldn’t drive up there without first walking to check sand softness. I did just such a walk before committing to a drive-along and sunk up to my knees. I almost had a costly boot sucked off while pulling my leg out.

Below: A visual lesson to fellow grassroots videographers ... 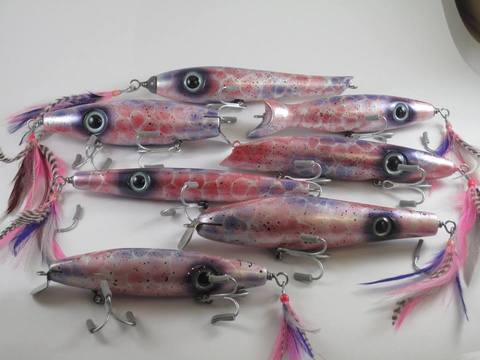 s very grateful, he had no luck in the prior weeks of finding safe placement for them. It is legal in the state of Washington to hunt cougars and many times nursing moms are shot leaving very young cubs orphaned. When a mom has been killed and doesn’t return to her den, within a day or two the very young cubs are forced to venture out in search of mom or food. These poor cubs who have only known their mom for food and protection are now on their own and at their age will slowly starve to death or be killed by another animal. Luckily in the case of the first two siblings found, a farmer had seen them wandering around and scared, he called Fish and Wildlife who responded and caught the cubs. They placed them in a safe cage and put a video camera on them throughout the night to make sure a mom was not coming back for them, she didn’t. A second pair of cubs and a single cub were found in similar situations in different areas over the next couple days. This officer kept them fed and safe in his garage as long as he could. Prior to these, he had placed 30 orphaned cubs over the last three years. He was relieved when he heard from us and began making plans to transport them to NJ. They landed at Philadelphia Airport that Tuesday night. Only four had made the trip, one had passed away before leaving Washington. The next day they were safe and sound with full bellies ready to start their new young lives in NJ. We held all four cubs at Popcorn Park for the next two weeks to have their exams and vaccines. Cohanzick staff came and took their two new cubs and the first two orphaned siblings now named Tocho (which means mountain lion) and Shilo (brother) would start life in comfort at Popcorn Park. They are still in quarantine for the next couple weeks but have been getting outside in an enclosed attached pen while we alter their outdoor enclosure. Although still pretty “wild” they are getting used to our staff. We sneak peeks of them rough-housing and playing but when we approach we’re still being greeted with a hiss and not a purr, but things are changing, it will take time and patience. This spring they will be introduced to our visitors.