Tuesday, February 03, 2015: It’s cold and clueless out there. I’m sorta serious about that “clueless’ part. As much as I revere the greatness of the great outdoors, it has no better insights into what’s coming down the pike than you or I. In fact, as far as we can predict the weather, we’re more up on the future than places like the Outback … which can only wait and see what's next on the planet's agenda. At the same time, the outdoors has also seen – and can take – anything, so it’s not overly concerned one way or the other. I always like to call on Native American thinking, which aligns remarkably with nature. For example, when asked if something might come crashing in from sky or sea, they sincerely answer, “Maybe.”

Below: "I said 'Maybe.' You gotta problem with that?" 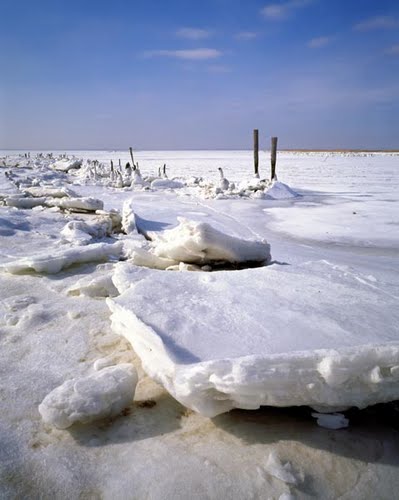 My clamming efforts have been foiled by ice atop the Holgate mudflats.

Some of the ice cover is in situ, meaning it’s right where it formed. There is also a floe component, made of big-ass ice chunks being blown onto the flats, off the bay surface, by hard west winds. It’s the big-ass chunks that take the longest to move on so I can finally get down to diggin' down. I even have my wetsuit gloves close at hand. They allow me to feel around in just-dug, water-filled holes, as I try to pull out softshell clams. The softies are out of this world this time of year. Winter softies are so sweet, having offed most of the phytoplankton they fattened up on – and which add a stronger flavor to the clams. Note: If you’re bayside and see closed clams on the surface, you might not want to mess with them, eating-wise. I’ve had trouble with these freeze-killed clams in the past. They seemingly open like a live clam when steamed but all that has actually happened is the ice has melted inside and loosed the shell. They can also smell so bad that they ruin any good clams in a pot. 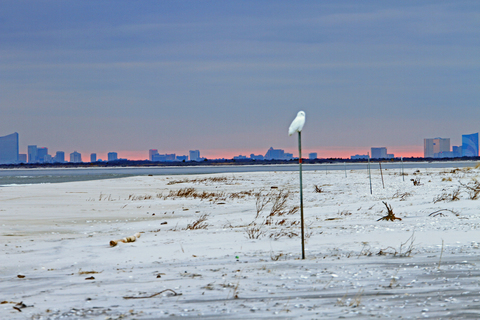 Two snowls in Holgate today. Both were in the washover area. Here’s a famed photog posturing for a picture or two, late-day. http://youtu.be/WdnsF18lpGI

Below: Nice catch. Read on. 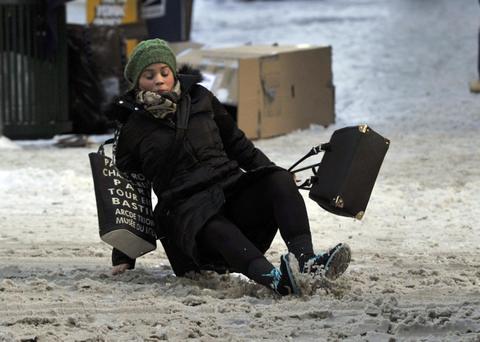 Give your skull a fighting chance.

The other day in the parking lot of a local store, I both saw and heard a gal go down on the ice, brutally. The hollow sound of her head hitting the blacktop had me and other folks running to her aid. Thanks to her wearing both a hoodie and a head warmer below that – and likely owning a tough skull – she miraculously shrugged off the ugly impact. No head wear and she very well could have been  medivac material.

I sure wasn’t going to hit the poor gal when she was a bit stunned but the reason she landed skull-first was the fact she was walking with her hands in her coat pockets. NEVER walk in icy conditions with hands in pockets. I’m serious as a brain bleed. Through eons of evolution, our arms have been genetically taught and tuned to instantly react to falls -- long before our consciousness even knowns what the hell’s happening.  In a nanosecond, they essentially throw themselves into service, to break a fall’s full fury. When those saving arms are trapped in pockets, via hands, you can rest assured your head is on its own – and it’s lousy at landings of any sorts. I can doubly assure that a sprained wrist or even a separated shoulder is a bargain when compared to a brain injury – which pretty much never go away. 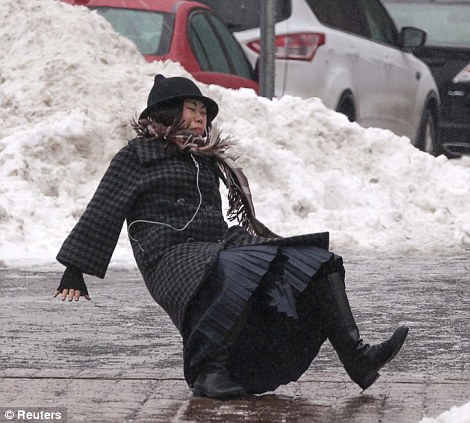 Hey, teach your kids this, too. They're not as fast as you think:

“War is peace.”   “Freedom is slavery.”  “Ignorance is strength.”  These are the three classic phrases that writer George Orwell used to show how the totalitarians in his novel, 1984, could use language to not just obscure the truth, but to totally eradicate it.


Greenpeace is now taking a page from that book.  Last week the organization put up a few billboards around Seattle with the slogan "Bring Balance to the Bering Sea."


The ads are part of a campaign by Greenpeace to target retailers and ask them to restrict purchases of fish from the Bering Sea.


Here is their spokesperson:


"The billboards and posters throughout Seattle urge the companies that sell Bering Sea seafood to share the responsibility for protecting a reasonable portion of the ocean to sustain marine life and humankind into the future. We’re calling on Costco, Target and Albertsons to step up as leaders by rejecting seafood that is harvested from the world’s largest underwater canyons in the Bering Sea."


The campaign has run into problems.  Not of obstruction, because NOAA and the North Pacific Management Council were extremely active in taking on research and trying to determine whether the habitats in these canyons needed additional protection.    The problem for Greenpeace was that the scientists found no unique habitats.


Further, NOAA undertook a massive underwater camera survey to document benthic sea life across the Bering Sea, and the results of this study will be presented to the council in June.  But Greenpeace seems afraid to wait, instead ramping up their campaign prior to getting information they may not like.


But the thing that struck me about this campaign was how Orwellian it was.   I went back and looked at Groundfish harvest data from FAO from every major ocean region since 1950.  And guess what.


There is one single area in the world where groundfish harvest levels did not climb to a peak and collapse.  Instead they climbed to a sustainable level and stayed there.  And that is the Bering Sea. Data from FAO on total groundfish harvest 1950 to 2012.  The Bering Sea is the only area that has not had a fisheries collapse.


The Bering Sea is the most balanced large scale fishing area in the world.  So when Greenpeace tries to tell retailers that there is a fisheries crisis, that industrial fisheries have depleted marine populations, the one place on the planet where that statement is demonstrably false is the Bering Sea.


The reason is that the Fisheries Management in the North Pacific, and the Bering Sea, has adopted a cap on groundfish harvests, and has consistently kept fishing pressure well below levels needed for long term sustainable yield.


The results are in the data.  When there was a short term decline in total groundfish in 2008 -2010, there was a quick bounce back.  This is a sign of a resilient and balanced ecosystem and is proof that the management here is the most successful in the world.


So when Greenpeace tries to call its campaign 'Bring Balance to the Bering Sea', they literally should be laughed off the stage.


Unfortunately, too many retailers, and even the Marine Stewardship Council itself, are unwilling to say the emperor has no clothes.  Yet they should say this.  We cannot have responsible people like seafood buyers and science based certifiers pretending that something that contradicts all facts is simply another part of the NGO spectrum of opinion.


The actual data behind sustainability, defined as preserving the opportunity for future generations to get the same benefits from an ecosystem as our generation today, is shown in spades in the Bering Sea.


No amount of 'campaigns' can reverse the facts.  We expect retailers to tell this to Greenpeace.

U.S. President Barack Obama has proposed bringing together the country's food safety operations into one agency to better monitor food quality in a move that would reshape the Food and Drug Administration.

The proposal was put forward as part of the President's 2016 budget plan. The new agency would combine the food safety responsibilities of the FDA, the U.S. Department of Agriculture and other agencies.

"A single Federal food safety agency would provide focused, centralized leadership, a primary voice on food safety standards and compliance with those standards, and clear lines of responsibility and accountability that will enhance both prevention of and responses to outbreaks of food-borne illnesses," the budget proposal noted.

The President's proposal reflects provisions in draft bill introduced last month by Democratic Senator Richard Durbin from Illinois and Representative Rosa DeLauro, a Democrat from Connecticut. The bill, introduced as the Safe Food Act of 2015, is designed to improve safety at a time more and more food is being sourced from overseas.

Each year, 48 million people, or 1 in 6 Americans, suffer from foodborne illness. More than 100,000 are hospitalized and thousands die, according to federal data.

In January 2011, the FDA Food Safety Modernization Act was signed into law. The goal was to shift the focus of regulators to preventing contamination rather than just responding to it.

Michael Taylor, deputy commissioner for foods and veterinary medicine at the FDA, declined to say whether such a move would be supported by FDA officials.

While recognizing that food safety is fragmented, he said, the FDA will focus on implementing the Food Safety Modernization Act "while Congress considers what the President has proposed."

Currently most of the responsibility for food safety lies with the FDA. The Department of Agriculture oversees meat, poultry and processed eggs.

The President's proposal calls for a single agency within the Department of Health and Human Services. The agency would be independent from the FDA and would be responsible for food safety inspections, enforcement, applied research and responses to food-poisoning outbreak The Super Bowl XLIX game made social media history, with a record-breaking 28.4 million tweets during the broadcast.

Restaurants took advantage of the focus on football to get their own brand messages out.

Noodles & Company tried to help the football-impaired know what to say during the game with its “Mac and Cheat” tweets.

But the big winner on Sunday may have been McDonald’s.

The commercial’s Ace Score was 706, one of the highest ever for a Super Bowl ad, and 21 percent above the category norm for quick-service restaurants, Ace Metrix said. Budweiser, Coca-Cola and Snickers tied for the No. 2 spot.

“An Ace Score over 700 is about as common as a perfect game in Major League Baseball: 0.06 percent of all ads over the past five years have scored above 700,” Peter Daboll, Ace Metrix’s CEO, said in a statement. “McDonald’s has achieved Super Bowl gold, surprising and delighting consumers and changing perceptions about the fast-food giant.”

According to AdAge, McDonald’s commercial also won the top spot in Twitter polls.

The Oak Brook, Ill.-based quick-service operator’s social media team was busy tweeting during the game — but not with its own ads.

Throughout the Super Bowl, McDonald’s encouraged cross-brand lovin’ by urging followers to retweet to earn prizes related to the commercials of other brands.

McDonald’s’ own “Pay with Lovin’” commercial also generated much love on Twitter.

The social media buzz about “Pay with Lovin’” carried into Monday, as the free meals were randomly doled out for “payment” that included fist bumps, dancing or family hugs