Kinda drab in the woods today but this stood out ... tasty, too (no way) 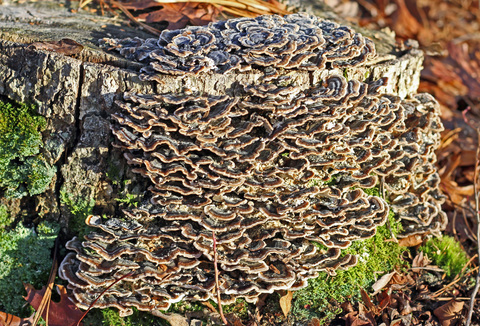 I did make a quick drive down Holgate way, early on. The only thing I saw was some friends. I did notice a hawk flying around with a hapless -- as in haplessly dead -- duck in it talons. It absolutely didn’t want me to photograph it, spying me and flying far into the bush. No biggy. It was not a look everyone wants to see.

Also in Holgate, the tide was going out and looked to be on its way to an ideal clamming lowness. I wasn't into it today but will likely hit it up for a few dozen tomorrow.

FINDS: My detecting day was typically all over the board. I dug some not-that-exciting 1930s electrical stuff in a house dump. I did uncover a real nice old brass “Letters” slot for a front door, likely 1900-ish. Then, I decided to hit a "lost" homestead site, now only a cellar hole in the ground. I've hunted it to the hilt and have gotten fun, real-old items there, mainly buttons. My only hope was to set my detector at the most sensitive level, which can be hard to use since it responds to the tiniest metal objects. Surprisingly, I quickly hit a good reading, though faint.

Kicking away the top layer of soil, the reading came in clearer, always a good sign. I then put my digging tool to work, which is saying a lot since it takes a load of effort to wield it. I get all my digging tools from www.easydigging.com. None better, providing you have decent arm strength.

Below: "This British tool from Chillington features a forged steel head that is 5" wide, 7" long, and 1.5 pounds. Our fork hoe or cultivator fork is effective at pulling out grasses and weeds with extensive root systems." I dug a solid foot down, busting some root along the way. It's always a very good sign when a target is beneath serious roots. It usually assures agedness. However, I soon got frustrated trying to get down to it. I eventually realized I had actually already uncovered it. It was simply so small it was lost in the thick loose dirt in the hole. That’s seldom a good sign since larger shotgun pellets can get lost like that. Nonetheless, I resorted to kneeling down and hand-emptying the hole, piling the dirt just outside it. I stood up and ran the detector loop over the dirt pile and got the best sound yet. It was larger than lead shotgun pellets.

After some sifting and sorting through the dirt, I realized why the target was so tricky. It was one of the U.S.’s smallest coins: a half dime. It was used before the concept of a nickel came along. This was maybe my tenth one but was still a fun find on a slow day.

Here’s what it looks like. I also show it next to a Mercury dime I found at a much newer site. By the by, the smallest coin -- and absurdly small at that -- was the silver three-cent piece. I have found a few. They are so thin they can almost be bent by hand, especially the ones that get worn down. Interestingly, they are so small and light they seldom sink very far down in the soil when lost. 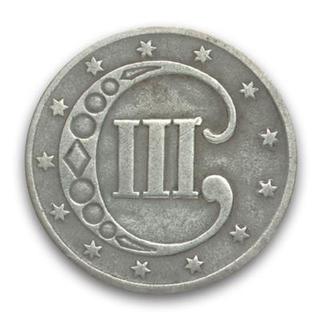 WASHINGTON ― The Center for Coastal Conservation, an advocacy group for recreational marine fishing and boating, has changed its name to the Center for Sportfishing Policy. The name change went into effect on Dec. 1.

With the new name came a newly redesigned website and web address. The web address is now SportfishingPolicy.com.

As the website states, the Center for Sportfishing Policy’s mission “is to maximize opportunities for saltwater recreational anglers by organizing, focusing and engaging recreational fishing stakeholders to speak with one voice to shape federal marine fisheries management policy.”

SAVE DOLPHINS - DOUBLE YOUR IMPACT NOW

Mile-long drift gillnets set to catch swordfish also entangle anything unlucky to cross its path, including dolphins. We need your support to power our proven ocean-saving campaigns through the difficult political environment ahead. If you won’t help now, who will?

Make a tax-deductible donation to Oceana before December 31, and you’ll have double the impact. Help reach our $100,000 goal to fight back against attacks on the world’s oceans now.

I'm at the emergency room.

Not a good way to start the day. I decided to go horseback riding this morning, something I haven't done in at least 25 years. My daughter talked me into it and I wanted to do something I haven’t done in quite a while to get me motivated and get out of this ‘funk’! It turned out to be a big mistake!

I got on the horse and started out slow, but then we went a little faster. Before I knew it, we were going as fast as the horse could go. I couldn't take the pace and fell off, but caught my foot in the stirrup with the horse dragging me. It wouldn't stop.