A long day of snowy owl watching comes to an end ... 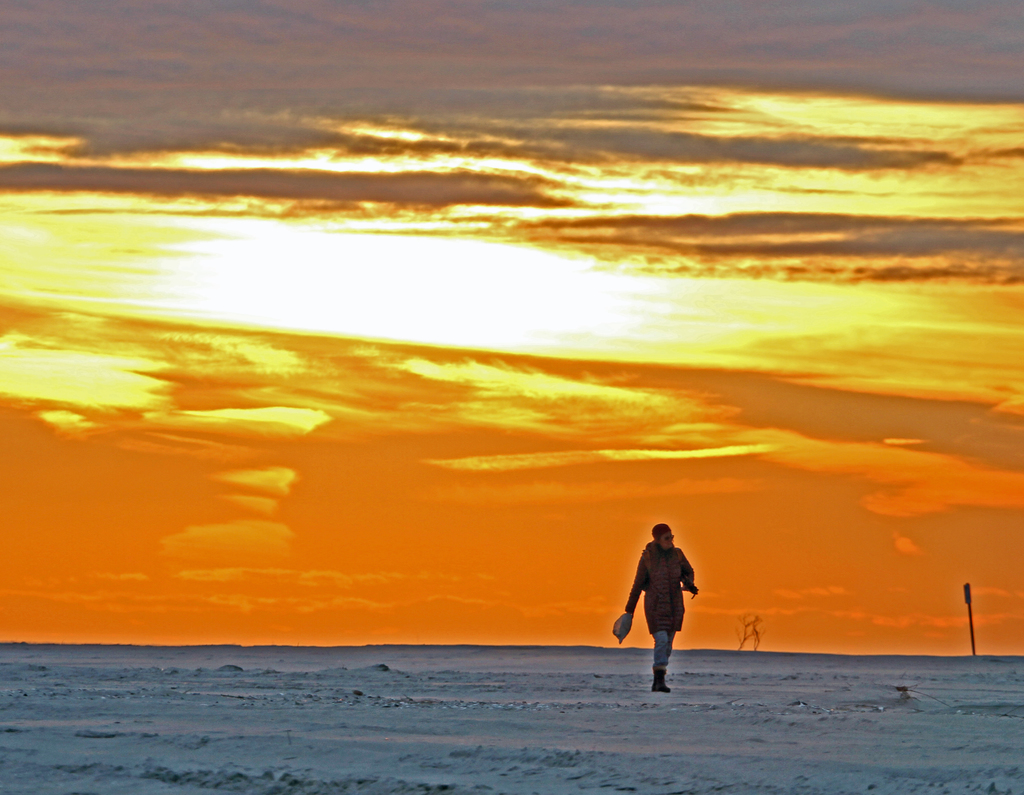 Tuesday, December 19, 2017: ‘Twas the week before Christmas … etc. As of right now (Tuesday eve), The SandPaper is sorta shut down until the first full week of January 2018. I say “sorta’ because most of my writers will be keeping an eye open for any bigger breaking stories. I’ll be out there more than usual; cruising from beach to outback and back again. By having absolutely nothing planned for the next couple weeks, I’m loose as a goose – and interested in anything all y’all might hear regarding cool things of an outdoors nature, i.e. of a nature nature.

I’m not being over optimistic when all but assuring there will be small surf stripers through to the end of the month, keepers mixed in. I base that on the fact folks are still getting them on plugs, meaning they’re actively feeding. The end to the beachline feed is marked by fish only going for bait. Yes, I’m also hyping myself to get in a load of casting -- clear into 2018.

Boat bassing is still rocking the ribs. Amazing biomass out there. I did, however, find a large quite-dead striper washed up on the beach in Holgate today. It was amazingly healthy – short of being dead and all. Likely a failed catch-and-release. It’s been estimated that catch-release-die rates can go as high as 15 percent. That sounds way too high for a bulldog species like bass. Even if true, C&R is still a winning conservational way to go. 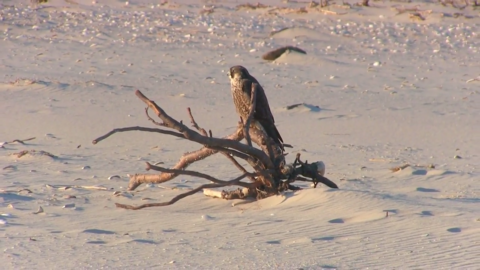 Here's a peregrine that couldn't care less about the public, as in humans. I looked for a leg band, it was that tame. People do keep peregrines as pets.

I had mentioned the totem shell carvings I've been doing to stay sane. Here's a vid look at the latest batch. 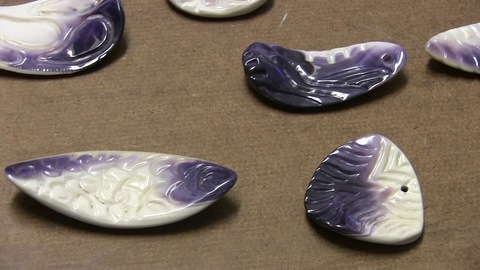 WATCH THAT FIRST BRIDGE – IT’S A DOOZY: A recent wreck has gotten me on the stick to alert motorists about the nasty-ass trick the road plays on folks heading off LBI – going onto the first bridge off the Island.

When driving the left lane onto that span, the narrow left lane literally coaxes a vehicle into visiting the concrete barrier, already only inches away. I kid you not. Motorists must literally fight the natural centrifugal urges of their vehicles to prevent mounting the divider. Some have failed; more shall.

I don’t care if you’re going as slow as the posted 40/45 mph speed, it takes a white-knuckle steering effort to stay off the wall. If you’re hauling ass … it’s concrete-kissing time.

Yes, it has been that way for months but maybe I can get some Christmas visitors -- or even hardcore locals -- to approach that bridge with due left-lane trepidation.

By the by, you really can’t gripe about folks using the left lane (drive right, pass left) since, not that far up ahead, you must move into the left lane due to a closed right lane over the Big Bridge.

This little crappie has those “please let me go” eyes.

Daniel DiPasquale is with Ron Redrow and Nino Aversa.

Nice start to the day

The arrest of the internationally-blacklisted fishing vessel ‘Labiko 2’ by the Liberian Coast Guard, assisted by Sea Shepherd, gives insight into the shadowy and largely unregulated shark liver oil industry. After being kicked out of European waters, these unscrupulous owners and operators, mostly based out of Spain, have set their sights on West Africa.

In the mid-1990s, the largely Spanish-owned fleet of approximately 50 deep-water shark fishing boats wreaked havoc in the North East Atlantic Ocean. For almost ten years, these vessels crisscrossed the continental shelf off the United Kingdom with gillnets until the populations of deep-water sharks fell to 20% of their original numbers. Fisheries scientists estimate that the fleet’s combined length of net fishing at any one time was between 5,800 and 8,700 kilometers, the equivalent of stretching a net from Spain to the United States.

The activity of this fishing fleet, mostly based in Spain, was poorly documented, with little information provided to fisheries management on catch and by-catch. The discard of fishing nets at sea, both through unintentional loss as well as deliberate dumping, was common practice. Approximately 30 kilometers of gillnet was lost per vessel per 4-8 week fishing trip. These lost nets -- also called ‘ghost nets’ -- can go on killing anything it “catches” for many years; they also equated to 750 tons of plastic pollution discarded at sea every month.

Both the amount of fishing gear used, and the high-level of lost gear, resulted in the deep-water shark populations plummeting.

The discovery of a shark liver oil production facility on board the Labiko 2 in Liberia reveals that the shark plunderers have now come to West Africa.

When the Labiko 2 was boarded by the Liberian Coast Guard, assisted by Sea Shepherd, it was quickly uncovered that the vessel was not using longline fishing gear as per their license, but rather prohibited deep-water gillnets, and that these gillnets were being used to target deep-water sharks. It was further discovered that the vessel, under its previous name ‘Maine’, was on the international blacklists of three regional fisheries management organizations. When applying for its fishing license in Liberia, the Labiko 2 had submitted what is known within fisheries enforcement as a ‘trojan horse application’, namely an application to conduct a different fishery than intended in order to cloak the destructive impact of their actual activities.

“The owners and operators of the Labiko 2 conspired to circumvent the laws of Liberia, devastating the Liberian marine environment in the process. I’ve said it before, and I’ll say it again - the Republic of Liberia is not open for business to plunderers”, said the Honorable Brownie Samukai, Liberian Minister of National Defense.

Shark species are slow to grow, late to mature, and breed small numbers of offspring, and thus are particularly vulnerable to overfishing. As shown though cargo manifests found on board the Labiko 2, the shark liver oil production industry, because of the sheer number of sharks killed, has an environmental footprint that can wipe out a fishery in just years.

“The Labiko 2 is a floating environmental catastrophe and the Liberian Coast Guard and Sea Shepherd have saved hundreds of thousands of sharks through the arrest of this notorious poacher. It is now incumbent upon Liberia to take strong legal action against the Labiko 2 to ensure that populations of sharks in Liberia do not meet the same fate as deep-water sharks did in Europe, East Africa and India”, said Sea Shepherd Director of Campaigns Peter Hammarstedt.

Holiday Lights Are for Celebration—and for Shining Light on Energy ...

Every year, millions of Americans power up decorative lights to celebrate the holidays. These festive lights invoke the best human aspirations of peace, joy, and generosity.

This time of year, Americans should also celebrate that we can enjoy these traditions because we live in a country with a modern energy system that (almost always) delivers affordable 24/7 electricity.

The holiday spirit is also about remembering the less fortunate. That’s where the lights are doubly useful as a timely reminder of the massive gaps in global energy access. Here in the United States, we have plenty of power for holiday lights, but many countries don’t even have enough electricity for their basic needs. Indeed, some entire countries use less electricity per year than Americans do on holiday lights.

To be clear, we’re not suggesting people stop decorating their homes and Christmas trees. We’re not even calling on people to consume less electricity. In fact, precisely the opposite: billions of people live today in countries that lack the energy needed to create the jobs they need or even to support the everyday lifestyles that we now consider normal.If every human being will one day have a refrigerator, a computer, and an air conditioner, we’re going to need a High Energy Planet. We shouldn’t try to squash these aspirations. Instead, let’s find a way to meet them. What could be more in the holiday spirit than that?

Note: This is an update to a blog post from 2015. The country figures are for 2015, taken from the Department of Energy’s Energy Information Administration (EIA). The US holiday light estimates are based on a 2008 EIA report, which we adjusted for efficiency gains from LED market penetration growth from 5 percent to an estimated 50 percent.