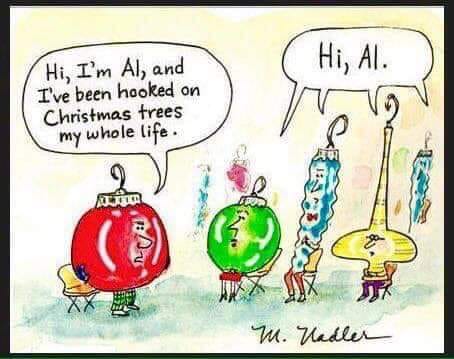 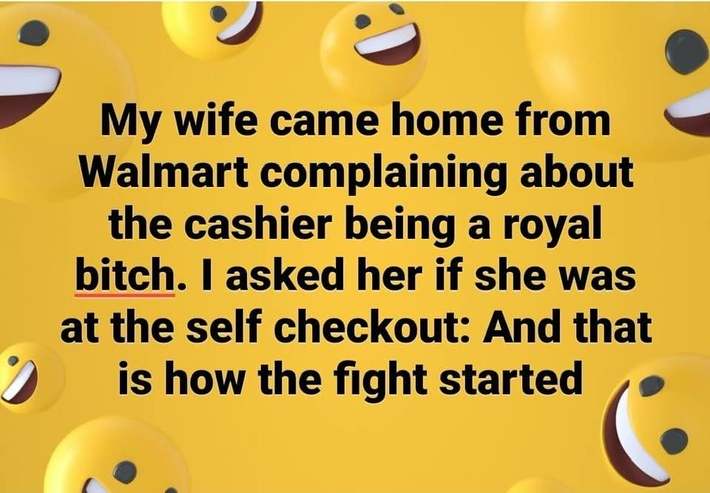 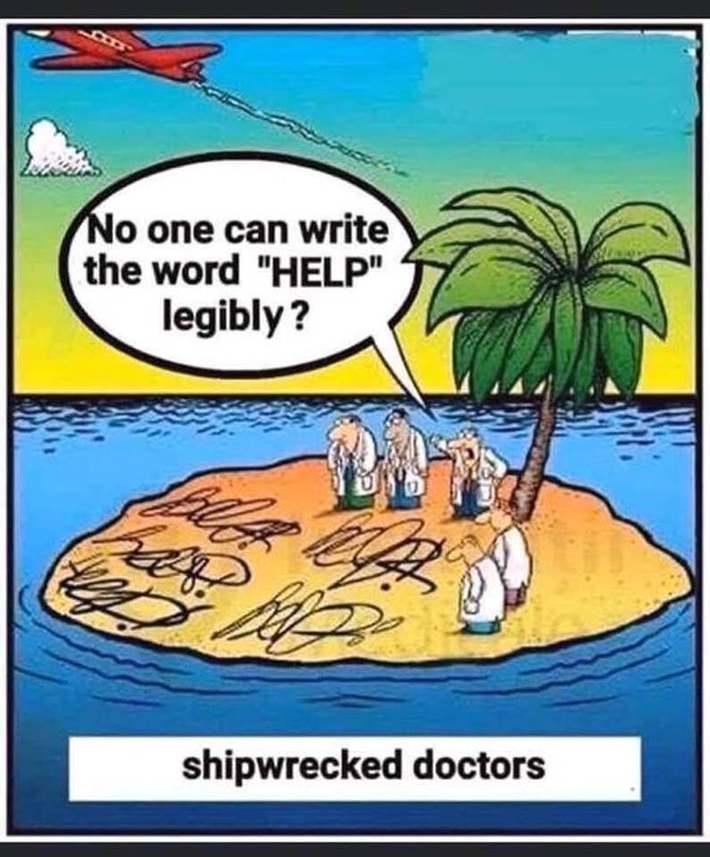 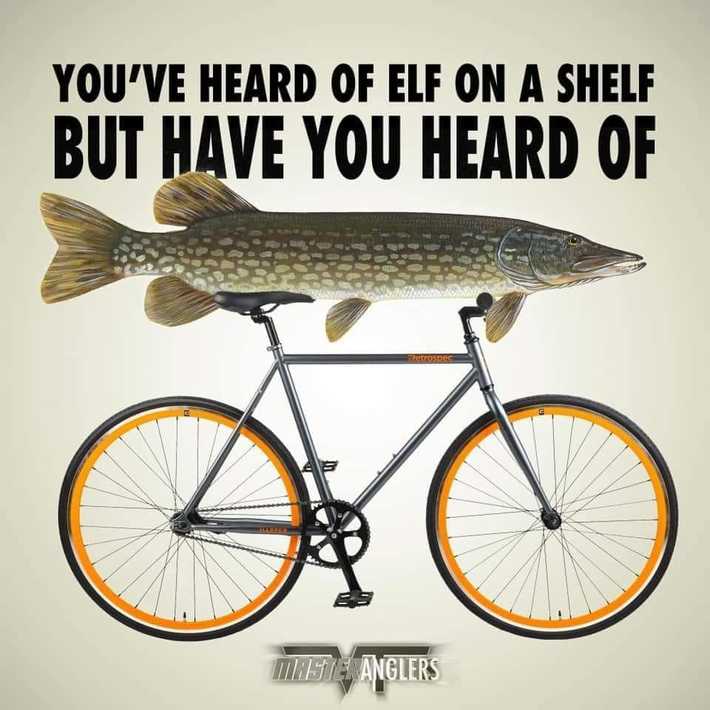 Tuesday, December 15, 2020: I’m just finishing multiple reads, most of a science-speak nature, regarding urbanized wildlife, which we have hereabouts -- once I explain our claim to urbanization. Please give it a read-see.

I’m about to take my subtle Christmas vacation, marked by numerous jaunts into the Pines and down to Holgate. I might even take a trip or two up to the Sayreville amber pits. Right now it is unlikely we'll see any whiteness on the ground, short of one of those quick changeover dustings as winds switch offshore as storm moves out to sea. As it has gone for decades now, even this large storm will be one day and done. It could explode once totally over the ocean, likely sending serious ground swells our way. The beaches of the Holgate Commons will be getting further creamed.

I'm checking on when replen action might take place there, most likely arriving via state and local efforts. The feds aren't yet in the the Holgate replen picture. Any Holgate sand placement will only mean wider beaches on the Holgate refuge and, in the long run, the far south tip, which is  moving noticeably closer to Little Beach, across the inlet.

(Below) An odd erosional sight as the rocks from the west end of the former "Submerged Jetty," show like never. Submerged Jetty is located south of Wooden Jetty, though apparently angled slightly southeast of the lay of that famed surfing jetty. For many years, the east-end rocks of the Submerged Jetty, which extended will into the surf zone,  menaced waveriders as they rode speedy waves southward from WJ. Again, to see the west end of that manly buried groin indicates some unique erosion. 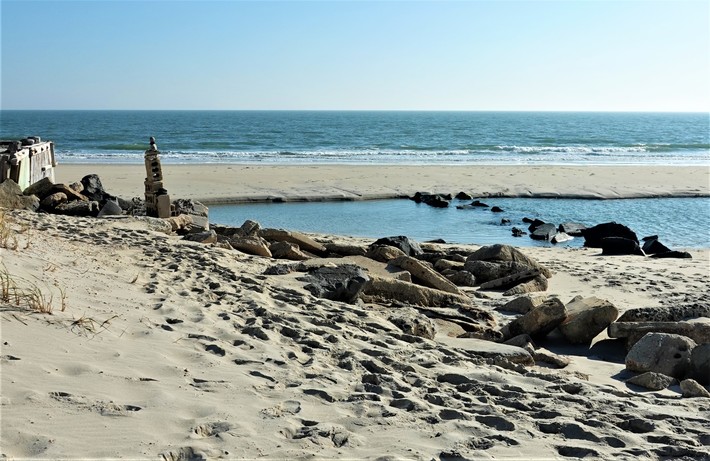 Most folks would think of us as a bastion of suburbia, made more so by not-far-off wilderness areas. But, speaking more concretely, we’re urban.

Say what!? I know, right? But, face it fellow LBI aficionados, when it comes to ground coverage and proximity of buildings, we’re as built upon as any downtown area. Urban areas got nothing on us, per square inch.

While labeling the Island as urbanesque is understandably balk-worthy, it must be dubbed as such to understand our ability to accommodate wildlife -- seeing I’m always all about wildlife.

Below: This inner city coyote shows why foxes and 'yotes can be misidentified. It also clearly shows their general litheness. 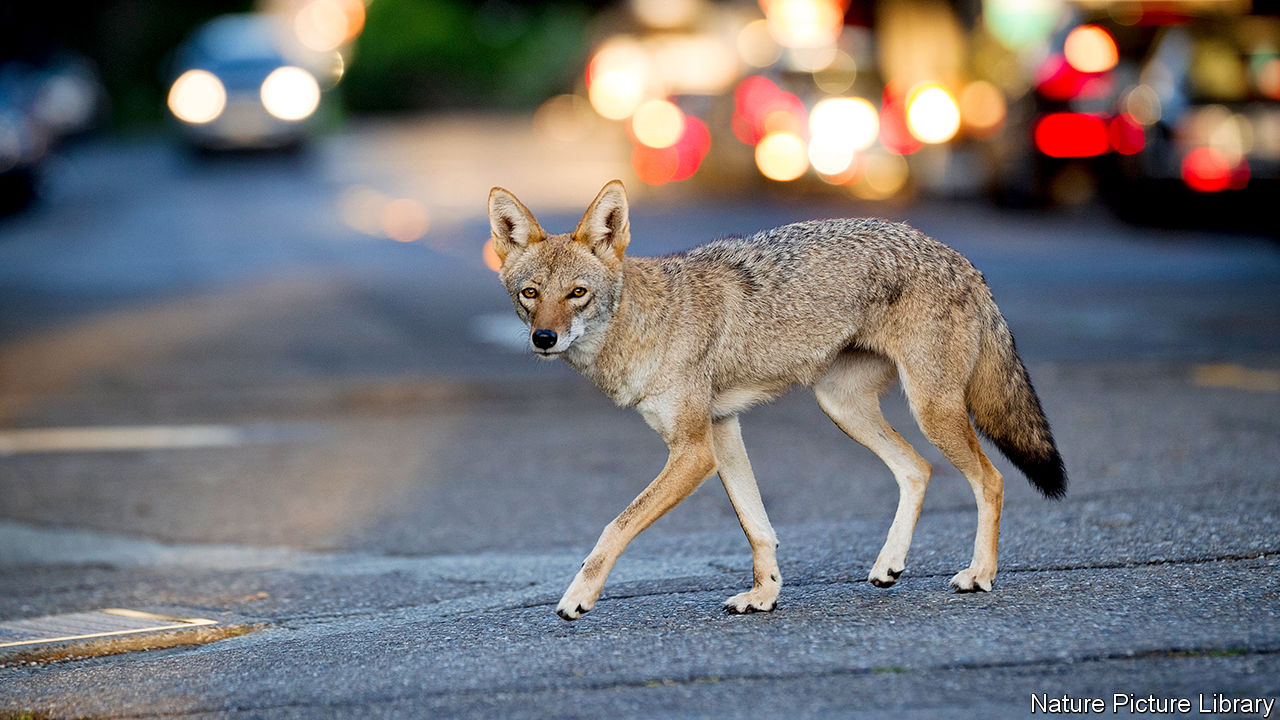 Based on Island buildout, it’s imperative to recognize how our manmade topography relates to wildlife occupation hereupon. Obviously, the now famed coyote presence has sparked a load of interest in LBI’s critter holding capacity. Being rated as an urbanish, one literally throws a bone to a slew of mammal species that readily adapt to in-town living.

The Island’s buildout has us primed to experience something known as a predation paradox, whereby vertebrate predator numbers increase with urbanization, while predation decreases, thus the paradox.

Putting that in local terms, we’ll theoretically find a far greater presence of middle-rank predators, known as mammalian mesopredators, living here than on the mainland, at least in terms of critters per square mile. Our mesopredators are mainly possums, racoons, rabbits, rodents, foxes, coyotes, and Felis catus (cats) -- with an occasional skunk (just this year) thrown in for good measure. Nearly all of these are omnivorous, dine opportunistically on just about anything digestible, be it sourced from nature or mankind, the latter being known as anthropogenic food sources. 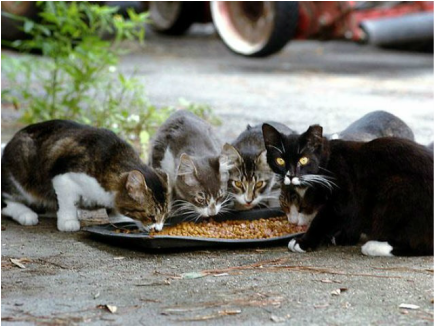 In a write-up titled “Urbanization and the Predation Paradox” (academic.oup.com), Jason D. Fischer writes, “The first tenet of the predation paradox is that predators are more numerous in cities than in the surrounding landscape, some avoiding developed areas and others reaching peak densities in cities.” N.B. “peak densities.”

The study goes on to somewhat sophomorically note, “Human tolerance for predators generally declines with increases in the predators' body sizes, which leads to removals of large species from cities.”

Yep, cougars, bears and wolves are out (!) when it comes to urbanite wildlife tolerances. Intriguingly, coyotes are just small enough to be urbanely acceptable … until they get closer to wolf size. It’s easy to sense an uncomfortability factor with our alleged coywolves. 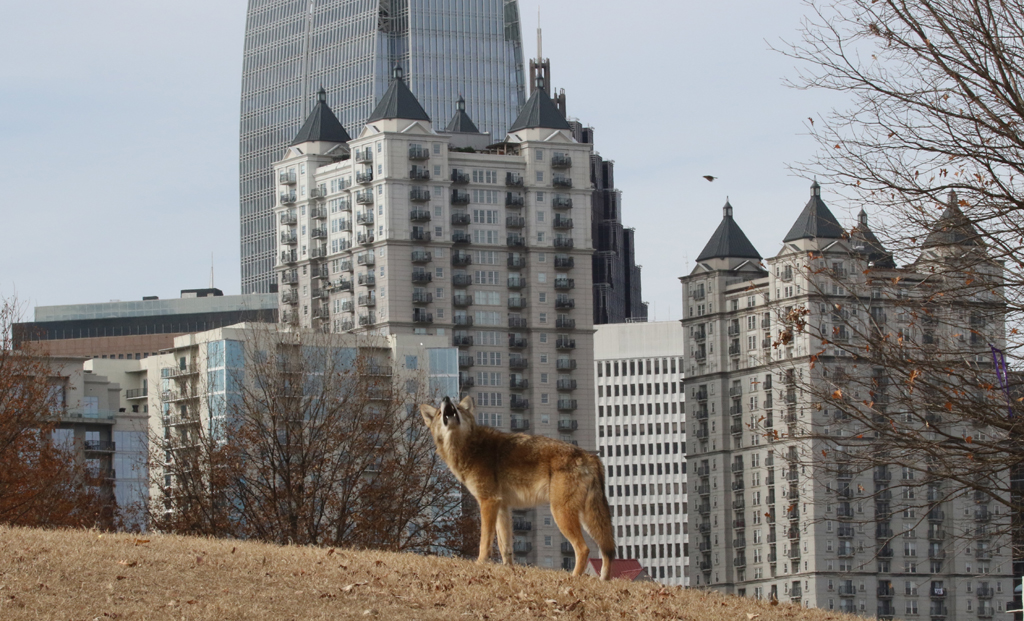 UNEXPECTED PREDATION TRENDS: While the elimination of the most alpha eaters from an ecosystem would seemingly crown urbanized coyotes, particularly of a coywolf stature, as kings of the unwild frontier, things are playing out in a counterintuitive way. One school of researchers is discovering predation within city wildlife seemingly diminishes, despite a higher number of creatures.

Regarding that, here’s some shop talk from “Urbanization and the Predation Paradox”: “It has been reported that fearfulness and mortality are lower in urban settings, a phenomenon referred to as predation relaxation, also known as the predator refuge or safe habitat hypothesis. The implication being that predation rates are also reduced in more developed areas.”

It should be objectively mentioned that another school of thought implies that predation pressure is expectedly greater in urban areas. However, that can simply be attributed to more creatures in the system, not the per capita predation rate.

Bringing things home, wildlife observations within city environments confirm a far less antagonistic atmosphere between the likes of coyotes and foxes. There are even indicators that the most populous larger urban predators, cats, aren’t as apt to become canine fodder.

While that cat/coyote coexistence is far from established here, in the wilds of nonurban zones, cats are readily dined upon by foxes. Once on-Island, the urbanized effect kicks in, whereby foxes, well-nourished by rodents attracted to anthropogenic food sources, no longer crave kitties.

“Many people provide wildlife with food, either directly or indirectly, e.g. pet food or garbage. The net effect is a subsidization of natural food resources that is likely to increase the carrying capacity of urban environments for many species.” 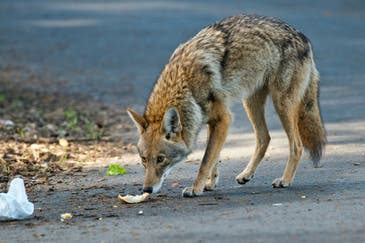 Might Island coyotes eventually find adequate forage in non-feline form? If mankind keeps feeding the kitty (pun intended), coyotes might find a dining niche more amenable to mankind,  much to the relief of cat and dog owners.

A RIGHT TO STRIPER SELFIES: I received a terse communiqué from an apparently easily riled Bassatarian. A Bassatarian is an angler who worships striped bass, though more sportingly than holily. Such true bass believers were the driving force behind the disconcerting striped bass regulations we’re now demanded to accept as gospel.

I’m among those not thoroughly sold on the current striper scriptures, which seemingly deem stripers as the only fish in the sea worth adoring, relegating the many gamefish fed upon by bass as mere heathenish also-swams. I see such Bassatarian deifying as the rise of an unholy eco-imbalance.

Eco-imbalances notwithstanding, I’ll irreligiously agree that 2020 striped bass regs have allowed many a landed monster bass to once again swim with the fishes -- in a non-mob way. The number of big-ass bass I saw photographed and let go just this fall was dang impressive, though heretics might see such a super showing as running counter to Bassatarian beliefs that a cataclysmic striper decline is neigh – and the only way to repent is to regulate.

But I digress from the odd phone message I got, which – you can’t make this stuff up – the caller criticized the way catch-and-release stripers are being “improperly handled” while being photographed. “These people (anglers) are damaging and killing the fish they’re supposed to be saving,” he offered. While he focused on boat-caught fish, his most scathing remark concerned surfcasters throwing back “mainly dead” bass. Is that like a little bit pregnant?

While it wasn’t spoken, I swear he was harboring disdain for anglers even targeting larger bass, hinting they should be approached like protected sharks, which must be kept wet, i.e. in the water, while dehooking.

As I often try to do, especially when people already have my number, I’ll offer some respectful acknowledgement of this complainant’s fears by acknowledging I have sorta seen an occasional trophy striper being held, let’s say, in an anatomically incorrect bending manner. Far more commonly, must-release bass are being kept out of water a little too long for its own C&R good. Oh, bass are bulldogs, able to survive some serious mishandling by mankind. But it’s the aforementioned protected sharks, having followed hooked and struggling fish up to the boat, that can quickly come into destructive play when a bass is a bit worse for wear when released. See below. Sharks thrive off worse-for-wear prey. So, there, mister caller, I just made a case for quick C&R.

Far Less conciliatory, I strongly assert it is fully righteous to take a quick pic before releasing a bass. Don’t give me any crap Bassatarians. We anglers are already being put through the regulatory ringer with this bass worship thing.

Going upside again, I sense many anglers who previously felt the need to rush trophy fish back to tackle shop scales are discovering pics alone garner adequate fame and praise.

CHATHAM (CBS) – Fishermen hoping to catch stripers off Monomoy Island hooked one, but then they got more they bargained for.

A 12-foot great white decided he wanted the bass, so he helped himself, chomping on the striper. The charter captain was amazed. 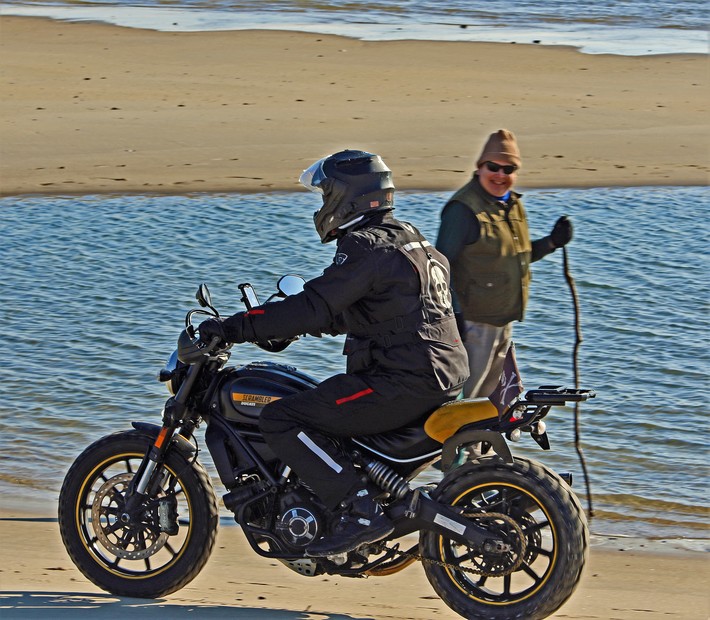 Here is the final data from the excellent 2020 Long Beach Island Surf Fishing Classic. A huge thanks to all the contests and an even larger thanks to the event's steering committee.