Tuesday, December 06, 2016: Winds are honking NE at a decent clip, pushing 25 mph. But it’s not going to be a long blow, nor is it going to do much beach damage. The rain will solid up the beach sand somewhat, not that many folks are driving it now. In fact, I saw nobody as I came into work for my evening shift. Rain will do that.

Just prestorm, fishing remained hot as bass blazes off LBI and IBSP, providing you knew where the flare-ups were taking place. Even when things are hopping, there’s still a load of fishing knowledge needed when the ocean isn’t being put upon by entire flotillas, showing the way to the bites.

Always looking for any out-there stomach contents in kept bass. Might see some mantis shrimp after this blow. I fouled some sand eels in my cast net, blind throwing. Waiting to hear about regurgitated winter flounder inside larger bass. 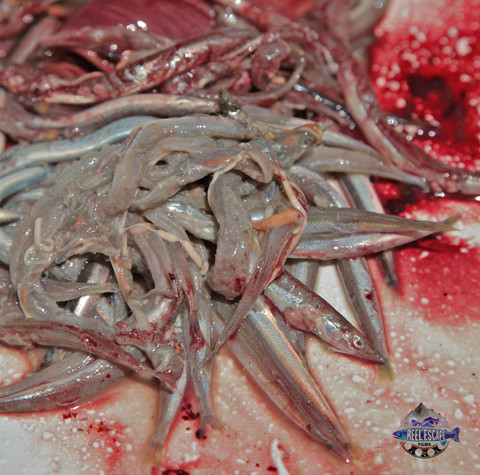 Found some moonfish inside a bass we caught at BI north jetty 2 weeks ago. First time for me. I see that Frank Crescitelli of Destination America fame took his ‘Fin Chaser’ cable program to the waters off Beach Haven on Monday. The competitive angler and show host zipped down from New York, intent on nabbing images of the hot boat bassing being seen lately off LBI. For his trouble, he hoisted a slew of stripers, including this solid 25-pound specimen, all catch and release. This fishing session will appear in an upcoming episode.

Photog Jack Reynolds was onboard the Fin Chaser, nabbing this C&R beauty … 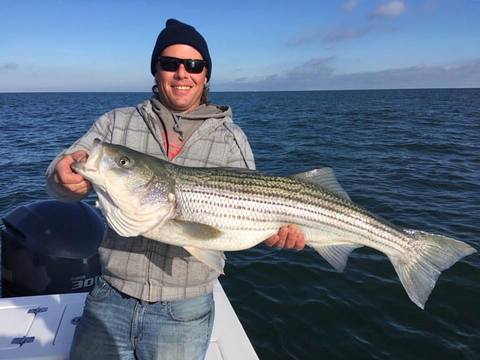 Speaking of eater stripers, I had a fun Facebook exchange with fellow columnist Jon C., who wrote, “Tried Striper Benedict last week -- broiled filets with a poached egg and hollandaise sauce. Can't really mess it up when (striped bass) is  that fresh.” I responded, “My most exotic was striper Stroganoff with handmade noodles ... Works with any Stroganoff sauce ... heavy on the cream and butter.” Below. 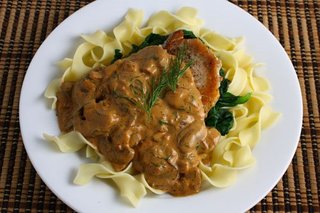 Jon: “Thinking next culinary challenge is a striper peanut curry.”

Me: “Uh, I'll let you try that first. Upon tastebud survival, I'm in.”

Jon: “I do it all the time. Thai dish -- peanut butter, soy, coconut milk. Just using striper instead of shrimp or the mock chicken I normally use.”

Me: “Cool. Peanut and striper seem divergent until you bring up the Thai saucing factor.” Good luck selling that on “The Shark Tank,” though, come to think of it, Jon’s Peanut Bunker Sauce might be damn decent to slather on plugs and trolling lures. Vaguely repeated: Not that many years back, the freshwater elephantfish was discovered. I was placed in the order Osteoglossiformes. With a snout looking very much like that of its namesake, the African fish also had another elephantish distinction: It’s as smart as all get-out. Theoretically, the elephantfish is easily the smartest fish on the planet, based on brain size and puzzle-solving ability. It has taken the aquarist realm by storm, being particularly coveted by scholars -- who love playing advanced chess with it through aquarium glass.  – the elephantfish using telepathy to move its pieces. It is said that Grandmaster Kasparov was so infuriated after being twice beaten by an elephantfish, he broke the glass and tried stomping the poor little fish.

Below: Gary Gasparov being dragged away shortly after smashing aquarium ... 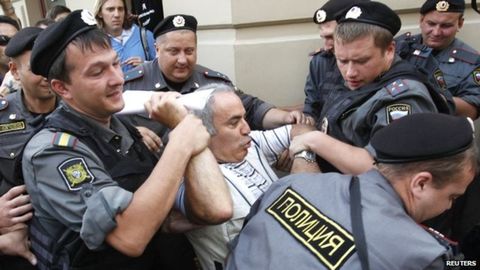 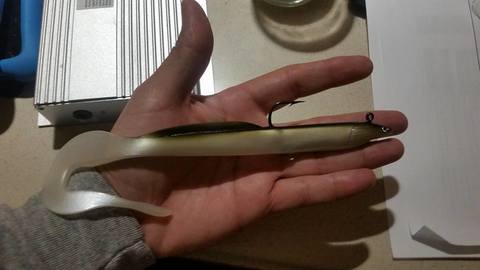 
I love stalking eels while they're stalking prey. 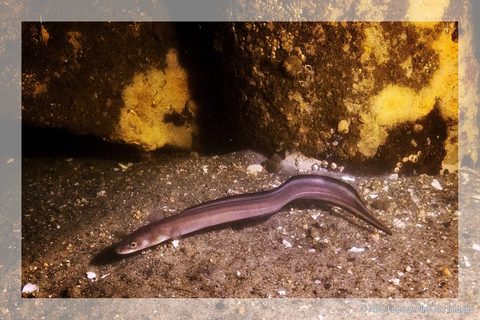