After giving up 6 first-inning runs, pitcher be thinking what next ...

Below: Obviously a college town: Tuesday, August 16, 2016: Ever feel you’re nearing a breaking point but can’t tell where the break is actually going to occur?

That’s just my typical had-enough-of-this production day pressure at the paper -- hampered by a finger I broke many weeks back. It has waited until now to suddenly, well, give me the finger – swollen and a-pain. No, I never get a lone broken finger set -- unless it’s an ugly compound fracture, poking out. Next break I might rethink that. Bitching done, I work with a great crew that makes things as easy as they can get – before those little things arise that I alone need to do.

This week’s top time-stealer was highlighted by a mom aggressively wanting a “cover photo” focusing on her daughter’s upcoming wedding. Gospel truth conversation.

Her hook: “There will be a really famous person attending.”

“Oh, I can’t say. Besides the place (no “place” location given) would be overrun with photographers if anyone was to know.”

“So, can I send a SandPaper photographer to the wedding?”

“Oh, we’ll have our own photographers.”

“So, you’ll send us a photo of this famous person with the couple?”

“Then what are we supposed to put on the cover?”

Irritated. “A picture of the wedding couple!”

Again, that was an actual conversation – and not far from others along the wedding theme line. I only went as far as I did in this case after having had Christina Aguilera and Taylor Swift attend separate private LBI events this summer. Boy, did I hear it from aggravated readers when we didn’t have exclusive photos for either VIP showing. So, now, if you hear about a wedding attended by a really famous person and we don’t have a photo of said famous person, my bad.

Just my luck the call-in mom reads this column ... and her daughter and brides maids (below) get wind of it, too. "Uh, I was actually thinking about using your wedding pictures on the next four or five covers of The SandPaper." Famous guest was Ted Nugent.  (Not serious about either those cover shots or Ted Nugent.) Hey, you can often tell a person more by the enemies made than the friends kept.  For example, Trump just ripped all media as “assholes.” Hey, if anyone should intimately know assholes … You just made an enemy, numbnuts.

But onward to fishing, which took a bit of an oddish turn with the taking of some surfside Spanish mackerel, a species for which I held the state record after landing a monster mack in Holgate. I took it on a three-oz Hopkins meant for bluefish. I recall it was so stormy that day it was approaching head-home conditions. The fish hit the metal at the top of a cresting wave, where I got a glimpse that told me this wasn’t your usual bluefish. I had never seen a Spanish mackerel prior to that.

Thanks to Bruce and Pat, my fish was registered with the state. For a few years, I saw my name on the state record list. I was to later find out, my fish was likely close to a world record. I kid you not. I was eventually beaten out -- by mere ounces -- when Donald Kohler caught a 9-12 in 1990, while fishing from a boat off Cape May. That fish became an IGFA world record.  Oh, well, I would have lost to him in both record-breaking cases.

Oh, I should mention my mack fought like a sommabitch, on par with an equal-size bluefish – and then some. I was using seriously heavy fishing gear due to weather and marauding blues to 20 pounds. Anything lighter and I’d never have gotten in that mega-mack.

The Spanish macks I’m seeing pics of now are real small. I hear they’re delicious at that size. My jumbo mack was far from delicious. Mackerel are mainly caught on metals – zipped in like crazy. In fact, when I caught mine (none since), I was reeling in the Hopkins in a give-up/go-home mode, i.e. as fast as I could get the line in. 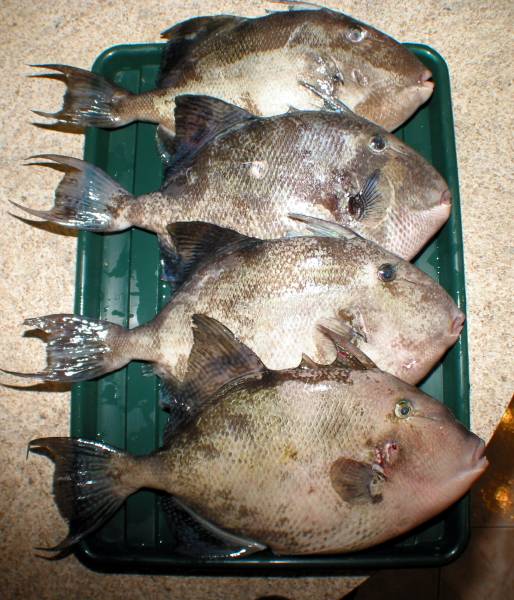 Almost exclusively boat-caught fish, I have taken triggerfish surfcasting; a few near the Holgate Rip while using kingfish rigs.

I have also taken a couple using sandcrabs, while balance-fishing off beachfront jetty rocks -- back in the pre-replen days, when togging could be excellent off the rocks.

I was, in fact, togging when I sight-targeted the triggers. I could easily see them casually plying the rocks of a larger jetty. I dangled a sandcrab bait (on a 1/0 blackfish hook) in front of them. Double score.

Below: For whatever reason, sandcrabs bounce back after a replenishment like gangbusters. 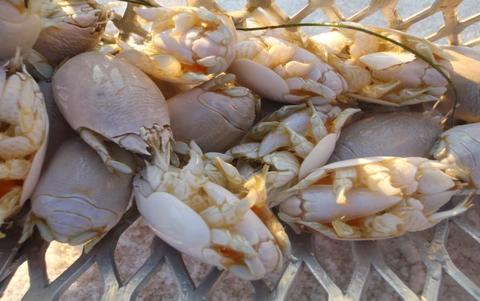 Triggerfish is one of the only species I always keep – to gut and later cook whole, in the skin; peeling away the oven-crisped skin and forking out wonderful white meat to dip in melted butter. You might guess that any triggers I might get this summer are coming home with me. The biggest I’ve caught was boat fishing, anchored and chumming grassies, off the Barnegat Inlet North Jetty. 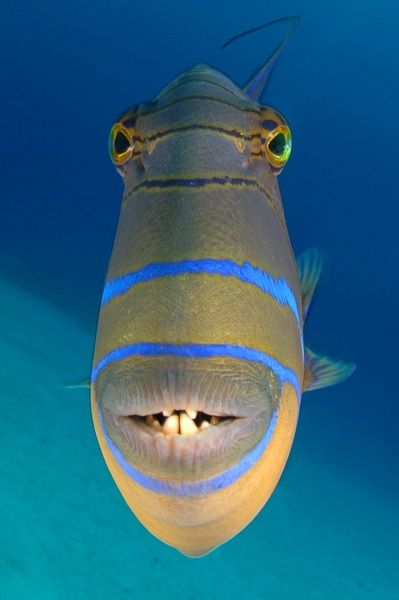 Water conditions: Just did a late-day look at the beach in Surf City. A lot of folks are surfcasting since high tide is aligning nicely with when lifeguards go off duty.

The water remains real clean. It cleaned up late yesterday.

While I hear of beachside water temps elsewhere in the mid to upper 70s, I could only muster a 70.1, via infrared.

The winds are brisk south. We might get hit by a period of rocking south winds into tomorrow. Here’s hoping it’s not enough to taint things. Then, we go into a compass spin of winds, with southerlies dominating, though nothing overly hard. I even see a land-and-sea breezes situation possibly setting up, meaning light winds in the a.m. and sorta brisk into late afternoon, before dying down after dark.

Lots of grass washed up on the beach yesterday but very little remains in the water; at most, some in the swash. 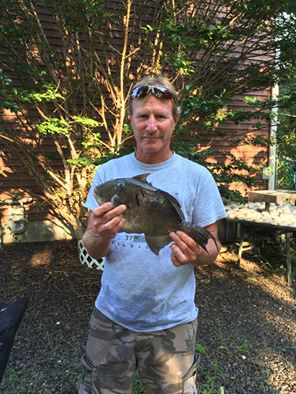 An when you get atop a huge school of triggerfish. 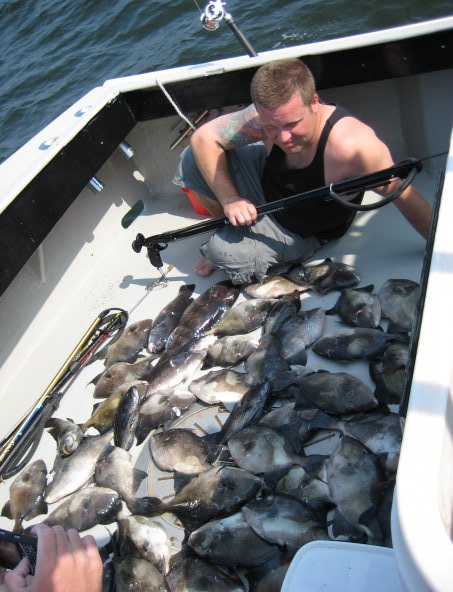 8/13 JCSA & Bergen County Fluke Tourney Report.. We just got the call from JCSA! 1ST PLACE FINISH and tie for the BNR! We went right to where we left them last week.. Good action for most of the morning with some decent fish but as soon as the south wind picked up that went bye-bye.. Battled the condition all afternoon and picked away.. Decided to call it quits a little earlier than we wanted. Still had a healthy box of fish with 20 Keepers up to 7.75lbs which landed us in First Place in JCSA and tied with our boyJerry Postorino of the Fish Monger! Congrats pal! We weighed in for Bergen but missed the mark. Congrats to all the winners! Glad we were one of them this week! The beat goes on....

Below: This is a good thing in as much as our commercial fishermen have to jump through more hoops than a dolphin at Sea World, so their competition in other countries should need to also play by those strict rules. And if we run low on seafood for America? The price gets upped a bit, closer to the real worth of seafood -- which is astoundingly under-priced in the US, leading to over-fishing to meet fishermen's profit margins.