Tuesday, August 03, 2021: Hopes of stemming what I think is some misinformation about Jake’s take of a huge tarpon 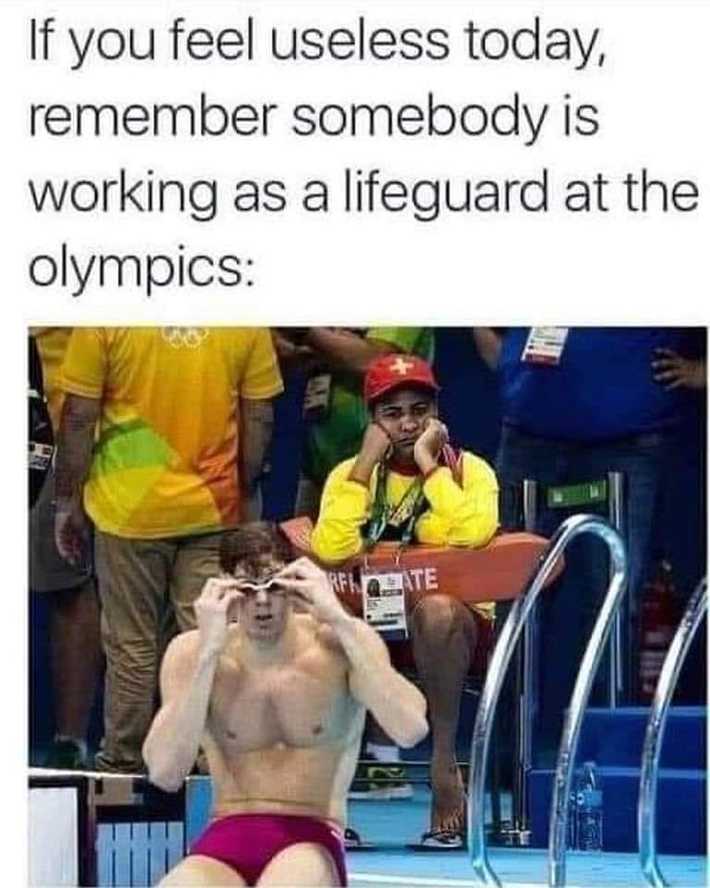 Tuesday, August 03, 2021: I want to get this SandPaper column story to you folks in hopes of stemming what I think is some misinformation about Jake’s take of a huge tarpon while spearfishing Barnegat Inlet.

First and foremost, the whole story is a whole other story by my thinking. Most important is the delusion that fishing doesn’t involve bloodletting at every level. I buffer that thinking by duly noting that gamefish – or even fish that can’t be kept as game – are themselves killing machines. Tarpon are sheer savages, among the most voracious killing machines.

In the same breath, I, too, wasn’t big on Jake's kill until I factored in everything, including the possibility that these giant predators might be making a power move on our waters, egged on by what I’ll now call sea change, which can come about a lot faster than big changes in global atmosphere.

If what I’m told is accurate -- that there is now a slew of tarpon along the inlet jetties – such an uncanny presence can ravage the delicate eco balance around those rocks.  As I note in my write-up, local fish are fully unfamiliar with the stealth of tarpon, leaving them sitting ducks as they make common move-abouts, in and around the rocks, while feeding.

And this eco-concern is not a stretch on my part. Our marine ecosystem is already treading on shallow ice when it comes to the survival of the very species tarpon would ravenously dine upon. As Jake points out, should these giants get into the bay, a calm water environment they covet, the single-season damage could be astronomical.

Although these stalkers from the south may never make it back to warmer waters, per experts, that doesn’t mean a whole other school of scouting tarpon won’t show again. The same folks up in arms over the killing of one might demand they must be exterminated. Along with swirling sky excitement, the Island’s angling community was recently blown away with word that sportsman and outdoorsman Jake Kline speared a major tarpon in the waters of Barnegat Inlet. Jake runs the fishing charter vessel AFT.

There’s an utterly amazing back story to his besting of the 45-pound, 65-inch tarpon. And it did become the spear shot heard far and wide.

When word and photos of the truly bizarre catch went viral, there was a ton of likely needless fury on social media, as opposing attitudes clashed. There were those cheering on the amazing take of the huge tropical fish verses those opposed to the kill, many wrongly suggesting it became a fertilizer fish, simply trashed.

Let me immediately shoot down the waste angle since, as we speak, the fish’s flesh is being smoked by Jeff, whose smoker has entertained many land-based species taken during his many deer hunts. In fact, he looks on spearfishing as the best of two worlds. “Spearfishing is a different art. It’s like bow hunting under water.”

TAKES THE SHOT: Now to the good stuff. Make that the stunning stuff.

Jake had first spotted tarpon in Barnegat Inlet last Thursday. At first glance, he couldn’t believe what he was seeing, as not one but two of these huge southern natives swam by. He left the water with a sizzling story to tell. “I couldn’t get a shot as proof. Then later, when I told everybody what I saw, no one would believe me! They asked me what I had been smoking.”

That led to an excited challenge aimed at diving partner Shane K, urging him come out and dive the same area, a tarpon-seeking mission. Holding on to disbelief, Shane took the plunge. Once underwater in the inlet, Shane’s disbelief quickly became a whole other form of disbelief. “He was on his first drop for just a couple minutes when he came up to the surface screaming that he saw tarpon!” recalls Jake.

Shane hadn’t seen just one tarpon … but six of them! And they were all in the same five- to six-foot range. But the numbers didn’t end there. By the next dive, when Jake’s successful shot was taken, there had been in the neighborhood of a dozen tarpon seen during their dives. Say what?!

Of course, after the effective speargun hit was made by Jake, the main concern was the thrashing tarpon at spear’s end. Although the shot had landed right behind the gill plate, in the vicinity of vitals, the fish went ballistic.

“I came up yelling for a second shot (from Shane).” Instead, upon Shane’s arrival, it quickly came down to a literal wrestling match, as the two wetsuited young men opted to essentially tackle the fish. “We bearhugged it,” said Jake. A drawn out mano-a-tarpon battle raged near the jetty before the fish was eventually subdued and hauled out.

The fish was quickly taken to Fisherman’s Headquarters where the size was recorded. Also, many a photo was taken. The images were put up on the shop’s popular Facebook page leading to an unprecedented barrage of 527 comments and 172 shares. It’s anyone’s guess how far the viral post has now gone.

The biggest question has been whether tarpon can be legally kept in Jersey. Officially, tarpon are unregulated in Jersey due solely to their rarity. In fact, the whole northern federal region is surely in a bit of quandary over this issue, knowing the southern federal region is strict as all get out regarding the taking of tarpon. With the possibility of more southerly species coming north, some common watery ground will certainly be established regarding regulations along the entire Eastern Seaboard.

As to why the tarpon are showing, Jake is well aware of global warming implications. During his fishing trips he has seen more and more tropical fish showing, most notably Spanish mackerel. When it comes to tarpon, he hopes these aggressive predatory fish aren’t here to stay.  “If they move in it could play havoc on our back bay fisheries.” He also says his tarpon shooting days are over. “I won’t kill one again.”

A quick reflection on his notion that tarpon could be a threat and not a boom to local angling. An army of tarpon steadily cruising our inlet jetties could quickly decimate other more indigenous species, including black seabass, tog and forage fish, none of which have ever seen the likes of these stealthy predators, which I’ve personally seen can be all but invisible in the water, especially on sunny days.

Conjecture: There is a better than even chance these exploratory tarpon will never make it back south, especially if colder weather moves in early. While down in the good-old-boys states, boat rentals are going great this season ... Paul H caught and released a A surprise catch while fluking this evening, a 26" cobia. It was my first ever but had to go back as the minimum size limit is 37". 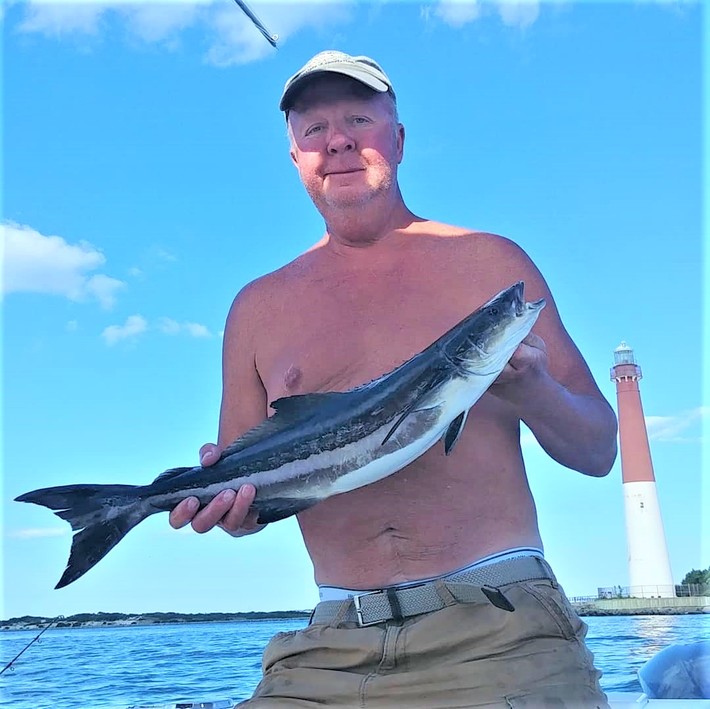 Grant Johnson hooked into a monster butterfly ray while fishing the surf for fluke. He was working a bucktail on light tackle and got a very different flat doormat than what he was hunting for. He carefully landed the monster ray in order to safely remove the hook. After snapped a fast photo, it was quickly released it.

On a Land Based Shark Fishing Page I am part of Mr. Bob Darling jr. posted this and it was caught on a Jersey Shore Rough Tail Stingray measured 66" across the wingspan and almost 11 ft from tip of the nose to tip of the tail and was 20 inches thick. Estimated 350 to 400 pounds. Took 2 hrs to Beach on a 30w. Carl Hartmann you slacking  you got to catch one of these beasts as they get even bigger. 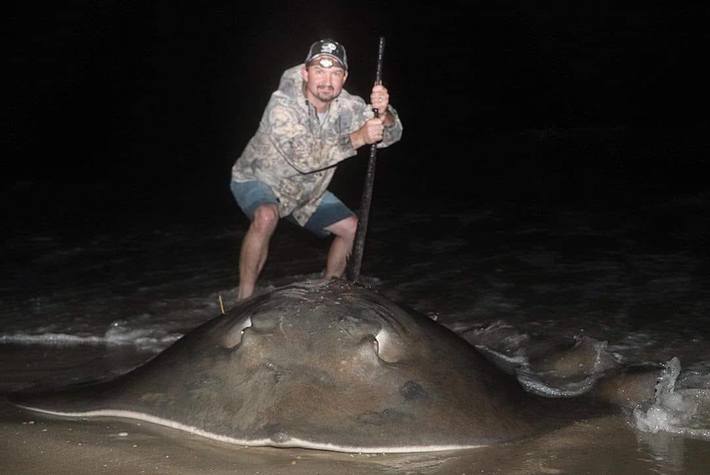 As authorities focused on High Bar Harbor to tabulate the recent tornado damage, and upgrade the size to a possible F2, I knew more telling F-tales were left in the twister’s wake on the mainland, where it crossed Rte. 72, east of Rte. 539.

In terms of tornado damage, toppled or damaged pine trees are often more telling than buildings, which can have varying degrees of structural resistance.

Taller old-growth pines are often very close in stature and strength, in this case offering a revealing look on the touch-and-go acrobatics of our fast-moving twister.

Indications are it was a narrow, erratic type tornado, known as a string tornado. As such, it would swing about freely, going from a funnel cloud when aloft to touching down as a bona fide tornado.

In just a small tree destruction zone on 72, I could discern where a funnel cloud dipped downward, cleanly snapping off the tops of old growth pines. Then, in a short distance, nearly identical pines were thoroughly tornado chopped near the ground, indicating the vortex was dipping further downward.

Most telling for me – and quite a cool sight for a weather buff -- was a highly discernible hollowed-out point in the woods, just north of the highway. Such an impact phenomena occurs when a descending tornado makes full-bore ground contact, pancaking all the vegetation, leaving a circular shape, a bit UFO-like.

If you’re so inclined, the photo of the hollow, if studied, shows downed trees tilting in at least three different direction, clear evidence of the vortex action.

Further observations indicate the tornado quickly lifted back into the clouds. From there, it seemingly stayed aloft for many miles, though there are sections of deep forest that might hide other touchdowns.

The tornado’s next dip included some waterspout time in Barnegat Bay before hitting High Bar Harbor before once again quickly rising into a funnel cloud before moving over the ocean.

In reviewing the tree damage along Rte. 72, I’ll bet the roofless farm it was a solid F2 twister, surely sporting winds well above the 113-mph point – where it graduates from an F1 to an F2.

Other photos show trees topped by a descending twister and those snapped toward the base, as it touched down.