Paddleboard fishing is still in it infancy ...

Thursday, September 22, 2016: “Such a day,” offers Chrissie Hynde (above) and the Pretenders in 1981, likely anticipating today. So maybe the breezes are a tad onshore but this is fall fishing weather … and today starts fall, officially. I got word of some large fluke in Barnegat Inlet, though showing (boat-based) at a slow pace near the New South Jetty – only outgoing.

Donald Ingling  5lb Fluke today just before the close of the season. A bottle of white, some corn on the grill, and tomatoes from the garden should finish off a good day. 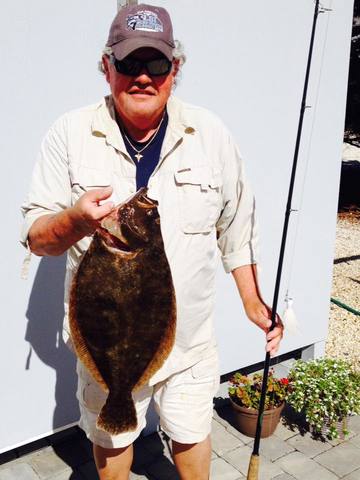 Off-Islander G.M. had a keeper striper, mid-Island, on a popper. Yahoo!! I think artificials always deserve an extra cheer.

Getting more and more reports of those false albies busting water in and around Barnegat Inlet. Haven’t gotten word of any being caught but as is always the case, you have to target them almost to the exclusion of other species. Even bluefish should have trouble catching up to a Deadly Dick being retrieved for albies. One of the very few albies I’ve ever hooked while surfcasting was off the end of the jetty one down from Holyoke, we used to call it Leeward Jetty when surfing. I was using, of all nonmetallic things, one of those bizarre, glowing orange, surface-commotion “thing” plugs meant for bluefish. They look like nothing more than a painted, oblong piece of wood. I was after big blues but running it so hard it would actually leave the water for a foot or so. An albie hit its trailing single hook in midflight and the race was on. I speedily lost when (hey, I was young and needed the money) I saw the line going out so fast I tried to adjust the drag. It was one of those drags at the end of the reel. It went to total drag a tad too fast. I came that close to losing the rod and reel before the plug broke off, likely at the knot. The guy fishing near me said, “That was a huge albie!” Thereafter sporting a bright orange lip piercing. 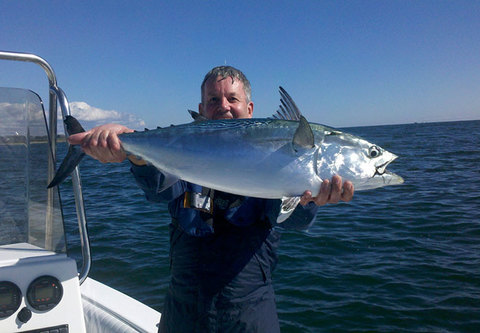 The blues are still running rampant – and small. Very few are in that diningly functional cocktail/tailor/tinker range. I’ll be starting to keep some today since even the right-sized smaller ones can be perfect for drying/smoking.

Ocean remains rough – and very mild (70). Untalented swimming is highly unadvised. We’ve had a slew of critical rescues on unguarded beaches. One in-water fatality has yet to be confirmed as a drowning but conditions were tricky that day. Parents watch your kids like hawks this weekend. I say that because – and I’m not being mean here – I see parents loosely watching their kids as if they’ll jump in if the kids get dragged out by a rip. The problem is those savior parents can’t swim for s***! OK, so maybe that’s a tad nasty but if it gets even a couple folks thinking about being doubly vigilant this weekend it worth the rancor. It might also get some surfcasters keeping an eye on any nearby bathers who are looking a bit suspect on the safety side.

HOLGATE WONDERINGS: I want to openly ponder an oddish statement made by Mayor Joe Mancini last week during a LBT commissioners meeting. He openly suggested that the famed “Wooden Jetty,” which he called the “timber jetty,” could be replaced with a significant rock jetty/groin; a big one at that. Oh, I know where he’s going with that, knowing such a hard structure would act to keep sand secured to north of the Refuge. I always take even off-the-cuff stuff like this seriously, especially when the state and local politics are involved. You get someone in Trenton that owes Joe (or someone LBI’ish) a favor and before you know it a contract is being assigned and a jetty the size of those built off Nebraska Ave. or Holyoke Ave. is rocking the Holgate end.

You likely know as well as meet that getting any hard structure built in NJ will mean going against the grain of current thinking, i.e. “No hard structure … ever again!” That said, Wooden Jetty is interestingly distinct. It separates the municipally-controlled front-beaches of LBI from the stretch of beaches semi-controlled by the Forsythe Refuge, as we see with the annual summer closure, during which state-owned beaches adjacent to Forsythe are closed. That closure, while based in large part on the Endangered Species Act, might also fall under a dictum within the Wilderness Act. I call that dictum the adjacency clause, whereby a designated Wilderness Area can control some activities on lands adjacent to the Area itself, i.e. publicly-owned properties.

Admittedly, it could/would come down to some very tricky legal interpretations and decisions before a federal agency (the refuge) could officially evoke such a clause. However, I had that exact clause leveled at me a number of times by former Forsythe managers.

I bring all this up to circuitously show beach replenishment along the far south end (adjacent to the refuge) is unlikely … for now. Thusly, LBT could make a strong case that it needs a larger stone jetty at the “timber jetty” to limit the sand escape onto unreplenished beaches. Sorry, but it might garner some support. It shouldn’t be mistaken for a breakwater – a oceanfront hard structure now outlawed in NJ.

I obviously hate it, wanting as much replen sand, as nature allows, to wash southward to fill in the Refuge’s overwash zone.

By the by, ACE is, as guessed, looking into a re-replen of the now eroded Holgate area, near the Wooden Jetty. It all comes down to funding – and current lack of same. I’ll go out on a limb and suggest that area will most likely get some new sand – and a greater demand by Mayor Joe to build a bigger jetty there. Any new sand would likely go all the way to the submerged jetty, adjacent to the northern boundary of the refuge. That would mean a much longer time before Wooden reemerges – unless one of those instant beachline-changing storms comes along.

And would the surfing near the parking lot be ruined by a big, new jetty? Absofrickinlutely not! I guarantee that a break forming south of it would be utterly epic – almost overnight. I’m not for it, mind you, but I foresee these things. I’ll also reaffirm that the next sanding over Wooden Jetty will NOT allow for such a quick reappearance.