Thursday, September 14, 2017: Feeling mighty summerish out there. And the Jose waves keep coming …

These looters were somehow noticed by police in Florida ... If they had only painted it with camouflage colors.

Thursday, September 14, 2017: Feeling mighty summerish out there. And the Jose waves keep coming … and will be building, possibly even doubling in size this weekend.

It’s going to be a spooky couple of days for the skeleton lifeguarding crews on LBI. Warm water and fine weather will have many semi-Islanders returning now that the kids are settled in to the school routine. In fact, I know of quite a few college kids who are breaking this way to get in what could be the last highly beachable days. Fine by me. I’m among a dang few locals who simply enjoy seeing folks cashing in on the pleasures of LBI.

That said, the beaches this week have been barren, angler-wise. Once I can drive all the front beaches (Beach Havens opens to buggying this weekend), I’ll get a much better read on who’s casting-about. – and what they’re catching. I still need reports via emails, so please keep them coming.

South end Holgate has also been as dead as it gets for this time of year.

The buggy drive to the end has been hampered a bit by these large waves, which have led to some overwash over to where the sands slant toward the bay. You can’t get down to the end at max high tide. The upside is it doesn’t take much of a drop in high tide to expose a legally drivable opening to the end. Just remember that right after the tide drops, there are sinky spots, still wet and holding a lot of air.

With days of waves to come, it’s imperative to keep tide charts handy, either in a hardcopy version or on smartphones.

BLOODIES FOR KINGS: If I can get some low-tide mudflats showing, I’ll be digging local bloodworms. Using our smaller worms – though I get an occasional larger “bass worm -- I hope to tap into the ongoing kingfish presence.

When folks have been on the kingfish, the takes have been stellar. However, they’re schooling up tightly for migration. You need to first find where they’re feeding. Since they’re best fished with lighter gear, this riled surf makes it tough to find them along the frontbeach. I’m betting Harvey Cedars has some better kingfish schools hanging out dining upon worms and coquina clams. 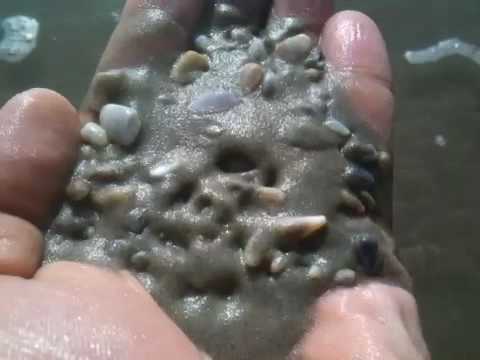 IT’S GETTING CLASSIC QUICKLY: For the many who anxiously await this year’s 2017 Long Beach Island Surf Fishing Classic, these big blues are propitious. Yes, propitious is a good angling thing, dude.

The 2017 63rd annual LBI Surf Fishing Classic will run over two months long, Oct. 7 to Dec. 10. Yahoo! There’s always added fun and energy in the surfcasting air when this event is in play.

The new nine-week format offers a load of time for entrants to wet lines.

A $2,000 first prize for a grand-prize striper is enough to get even reluctant casters out in the fresh salt air.

Per usual, it’s important to get signed up early … and often. The “often” part means you, family members and fishing friends. Nothing wrong with a little in-house wager.

Make certain to read the details of the event; take advantage of all the “Bonus Cash Days.” It’s a win-win … coupling special-day prizes with the already hot regular prizes.

To get an online read of the classic’s brochure, go to lbift.com. On that homepage, click on “About” in the blue box with the event logo.

Note: Registration is underway at all participating tackle shops. The first 300 registrants signed up before Oct. 6 get a FREE LBI Surf Fishing Classic Tournament T-shirt and hat while supplies last. After the tournament starts on Oct. 7, the T-shirt will be $20. Tenacity, coming in before sunrise at the Manasquan Inlet. The Magnuson Act not only dictates seasons and limits on recreational anglers, but commercial vessels as well. Tenacity, of Tenacious Fishing Corp. of Montauk, New York, has a federal fishing permit. (Photo by Jennifer Peacock)

STAFFORD – A trip to Annapolis, Maryland might be what saves the 2018 New Jersey fishing season.

Saltwater anglers and their allies crowded the Stafford Township municipal chambers, where the Marine Fisheries Council held its regular Sept. 7 meeting. Although the first hour was filled with its usual reports and comments, the Council’s second hour saw passionate arguments and discussion from Council and audience members about what to do with the ever-shortening fishing season and its negative impact on commercial fishermen throughout the state and beyond.

Jim Hutchinson Jr.’s Sept. 8 article at TheFisherman.com quoted boat captain Adam Nowalsky that cuts felt in fish seasons and quotas for 2017 will be mild compared to what’s expected for 2018, based on the early returns from the National Oceanic and Atmospheric Administration Fisheries surveys. Those quotas and seasons are set annually.

Captain Victor Hartley III of Miss Ocean City explained to Jersey Shore Online that although regulations dictate what size fish may be kept, anglers must count all fish caught toward quotas.

The quotas and seasons were cut because the powers-that-be determined that New Jersey overfished in previous years. Three fish are most caught in the state: flounder, sea bass and scup. Before sunrise at the docks by the Manasquan Inlet. Black Sea Bass and Fluke seasons, which draw the crowds, are over for now. (Photo by Jennifer Peacock)


Ed Yates, president of United Boatman of NJ, told Council he and his members need black sea bass season opened on an emergency basis, as this year’s season was cut short. Although some fisherman have permits to fish in federal waters, those fish cannot be landed in New Jersey.

“This has led to two things: unemployment for not only my crew, people at our dock, and now I’m getting people telling me that they’re going to lose their help,” Yates said. “So now we’re really in a dilemma. We’re sending people to the unemployment office early because of this.”

He added that the fishermen of New Jersey are “fed up” with the “nonsense” of the Mid Atlantic Fishery Management Council and Atlantic States Marine Fisheries Commission, the bodies that determine recreational harvest limits.

The MAFMC was created as one of eight regional fishery management councils under the Magnuson-Stevens Fishery Conservation and Management Act of 1976. That is the primary federal law regulating marine fishing in federal waters. The law was overhauled in 1996 and again in 2007, and is up for reauthorization.

Some saltwater anglers support the Modernizing Recreational Fisheries Management Act of 2017, introduced back in April. The sponsors say Magnuson has created unnecessary restrictions and seeks to have the fisheries management overhauled and modernized.

NOAA Fisheries, part of the Federal Commerce Department, monitors the fishing of waters, and according to its mission statement, under the authority of Magnuson, works with the regional fishery councils “to assess and predict the status of fish stocks, set catch limits, ensure compliance with fisheries regulations, and reduce bycatch.”

Locally, the NJDEP’s Division of Fish and Wildlife holds to ASMFC seasons and limits, which are approved by the Marine Fisheries Council each March.

Council chairman Dick Herb said New Jersey was the first state ever to challenge the ASMFC and win a reversal, specifically about fluke. A coordinated effort by all fishermen—commercial, recreational, private—can pressure those decision-making bodies to adopt more favorable regulations for New Jersey.

“At least we broke that mold,” Herb said about the decision reversal. “We’ve got to build on it. We can’t just say, ‘Hey, we won. Now we’re going home.’”

In the meantime, audience members called for an organized, formal protest of the Dec. 11-14 joint meeting of the MAFMC and ASMFC in Annapolis. It’s at that meeting when recreational harvest limits for 2018 will be proposed and adopted.

Hartley has offered to arrange a charter bus so fishermen will make the trip to Maryland. A show in numbers may help sway things in New Jersey’s favor.

So last night I plugged on a yak for my first time had bass chasing my popper ,blues blowing up on my popper no takers my buddy got one nice blue on the yak, then on land he got a bass and a bunch of blow ups , I failed ,but was a great learning experience, what was strange where we where we should have seen mullet ,baby bunker etc didn't see one ,weird I assume they r still in the lagoons etc ,tight lines hope to get out again soon

Daniel DiPasquale
Watching finicky behemoth back bay blues during September in Jersey can get frustrating so last night I had to ask Art Berkman for his famous rabbi blessing and it was quickly answered ....... blasted fish on plugs then hammering gators this morning to 41" on plastics and bottle darters. Have been on these fish for quite some and they are only getting bigger. Wawa's gobbler is back, the fall is near!

Part of our mixed bag catch today with Bill Browne.

The Beach Haven Charter Fishing Association was well represented at last week’s meeting of the New Jersey Marine Fisheries Council in Manahawkin. On hand were current captains John Lewis and Fran Verdi, past member Captain Adam Nowalsky, and BHCFA member Jim Hutchinson Sr. Verdi and Nowalsky spoke to the Council and audience in representing the recreational fishing industry in New Jersey.
An unusually large crowd of over 100 anglers and fishing professionals were in attendance seeking relief from the double hit of closed seasons for black sea bass and summer flounder. Their pleas were not able to gain any satisfaction, but they were urged to keep the pressure on and continue their efforts with other governmental agencies.
Captain Adam said there would be a joint meeting of the Mid Atlantic Fisheries Management Council and the Atlantic States Marine Fisheries Commission December 14 and 15 in Annapolis, Maryland. He said that a large contingent of New Jersey anglers could help the cause for fishery regulations in 2018.
Captain Fran asked the New Jersey Council to make sure the New Jersey DEP renewed its efforts in support of anglers especially with black sea bass.
Following the meeting Captain John said that he is trying to make the best of a poor regulatory situation on the water. He is currently fishing for porgy, bluefish and Bonita as well as sharks, tuna and mahi offshore.
Additional information on the Beach Haven Charter Fishing Association can be found at www.BHCFA.net.

A party charter vessel was stopped and hundreds of lbs. of fish were dumped in the harbor, officials say. 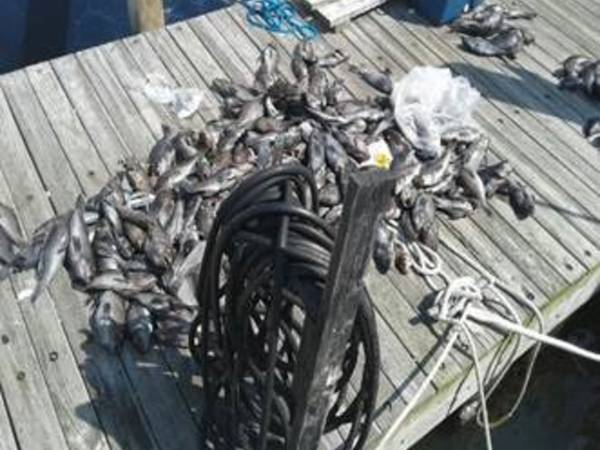 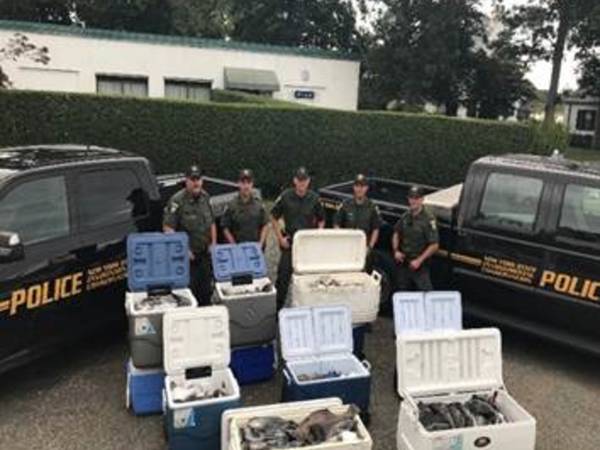 MONTAUK, NY — It was "carnage on the water," when the crew of a party charter vessel threw hundreds of lbs. of illegal fish overboard in Montauk harbor, according to the New York State Department of Environmental Conservation.

Environmental conservation officers were patrolling the harbor when they spotted a vessel whose crew was throwing fish overboard, the DEC said.

As they approached the party charter vessel, ECOs ordered the fishermen to stop; the orders were ignored in an attempt to avoid prosecution under environmental conservation law, the DEC said.

ECOs estimate that hundreds of pounds of illegal black sea bass, fluke, and scup were dumped into the harbor, the DEC said.

Once the fishermen were off the boat, additional ECOs assisted to recover as many fish from the water as possible, the DEC said.

The abandoned fish that could be saved were donated to a Long Island mission. The fishermen are due back in East Hampton Town Justice Court in October, the DEC said.

The DEC did not name the fishermen charged.

Photos courtesy of the DEC.