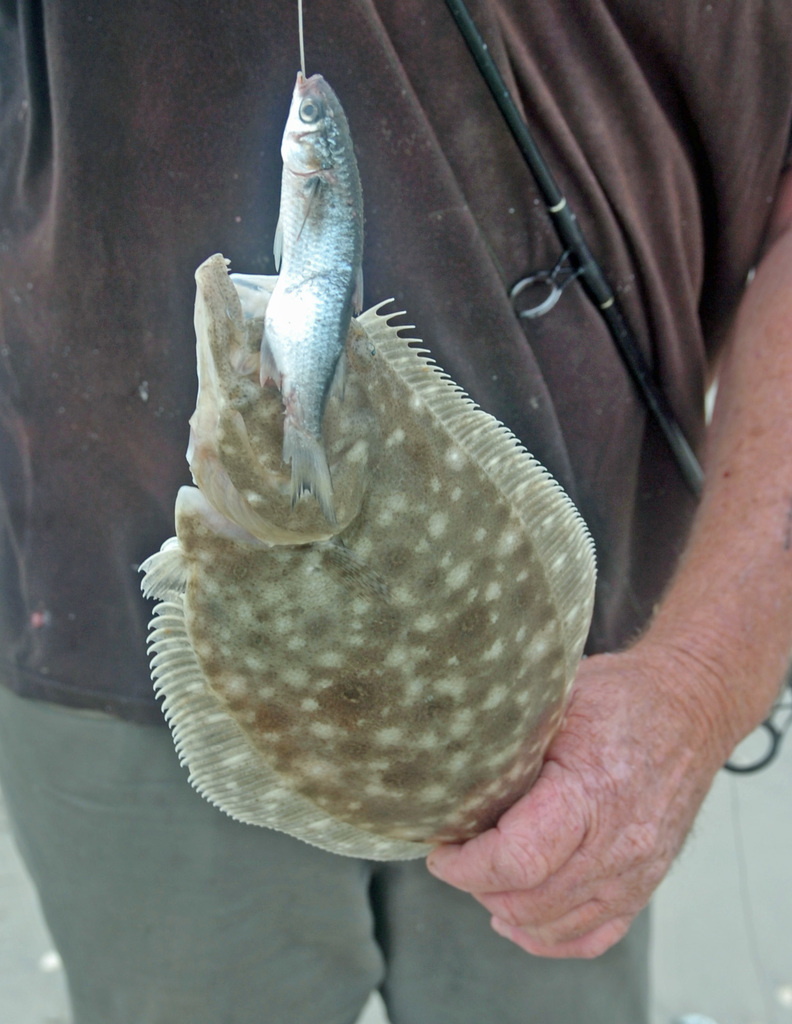 Thursday, October 25, 2012: As we hopefully try to ignore the theatrical preamble to whatever grade of stormy weather is really coming our way, fishing activities were real brisk today. As much as I try to stay ultra local in this blog, I can’t overlook the huge bass (40 poundish) now being taken off the Swimming Beach, IBSP. I hear there’s a lot of jigging (bucktailing) going on. Even more northerly speaking, beachside venues like Lavallette and Belmar have smaller bass out the kazoo. I must now remind folks, ad nauseum, that those bass often never make it to us. Still, you boating  folks with vessels still in the water, tomorrow might make for prime bassing, after turning north after Barnegat Inlet. Far more locally, I’m hearing of some amazing numbers of small black drum being taken in Manahawkin Bay. Those fine eating drum might make a decent show in the surf soon, though black drum are very skilled at migrating south via, solely, the ICW and other bayside passages. The cut-off size for high edibility with black drum is, maybe, 15 pounds. After that, it’s all matter of taste – clear up to 100 pounds worth of taste.

Below: A nice drum size to invite home. 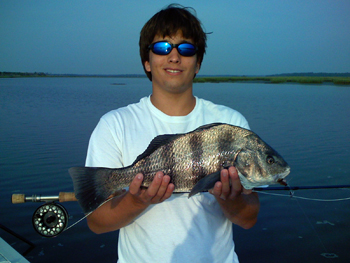 You’ll see some tackle shops offering fresh butterfish as bait. There is no better meat for big blues. It’s even above-and-beyond bunker. In fact, it’s well worth having a spiked rod (and circle hook) dedicated to butterfish baits.  It would be absolutely no surprise to anyone to hear a massive bass scarfed up butterfish bait. I got a few still-flappin' from George G. I put them to immediate use: pan-fried in spicy butter. Hey, there were no choppers around at that particular moment. Holgate remains bluefish hdq. Still nothing but small models. Slammers are nowhere to be found. Maybe after the blow.

Ocean water temps range from 61 to an absurd 65.

Storm thoughts:  Many of the worst storms to hit the Jersey coast in the past 20 years never even made it here. But, man, have we ever been ravaged by the frickin’ pre-storm hype. It now borders on absurd. Keep a calm head.

Below: Ducks try out the beach. No offense but mallards are some dumb-ass birds -- though, technically, some of the fastest feathered fliers in the skies. 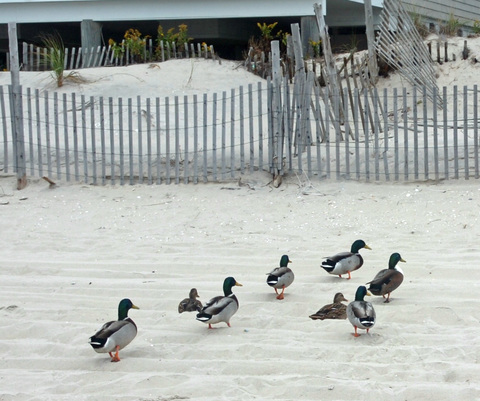 Even more on mola molas:

I’ve gotten a ton of mola mola news. In fact, I’m getting schooled, literally. Two very scholarly types contacted me, followed by a slew of equally-savvy anecdotal folks. It was mola  talk at its finest.

On the Ph’D side,I was told there is clear evidence that molas frequently and safely go in and out of inlets in New Jersey. I did not know that. I figured they were blown in.

Furthermore, per data (always god stuff to know), they absolutely respond to the smell of jellyfish, in  our case the cascading scent of those overpopulating bay nettles.  I already knew that molas have utter immunity to the toxins in many gelatinous zooplankton.

On the observational front, molas seem to be on a roll hereabouts, per Capt. Alex and other charter captains, who have frequently seen them inside Barnegat Inlet this year.

I even got a just-today mola report. This morning, Walt P saw the largest mola he has ever encountered. It was merrily moving out of Barnegat Inlet – and at a damn good clip, via both the outgoing current and its own mola power. Walt motored ahead of it just to get a good gander at the 5-foot long “sunny.” At that length, it was likely over six feet deep, surely weighing hundreds of pounds. That observation could show that even jumbo-fied molas may be venturing into the bay, sucked in by that smell equivalent of jellyfish pizza cooking in the oven.

Enclosed is this week’s fishing report for the Beach Haven Charter Fishing Association. It is pasted below and also attached as a file. If you have any questions, my cell phone number is 609-290-5942 and my e-mail address isjamesghutch1@aol.com

The captains of the Beach Haven Charter Fishing Association are anxiously keeping their eyes on approaching Hurricane Sandy. Although projections currently call for her to pass by well offshore, strong winds and large waves are expected in the area from the middle of this coming weekend until early next week.

Some of the captains have plans to fish in the Seashell Club’s annual Striped Bass Tournament. With current weather predictions calling for decent conditions on Friday and Saturday, some serious fishing is expected to take place.

Up to this point the striped bass catches in the Beach Haven area have been few and far between. Some captains are expressing the hope that the upcoming storm will produce the impetus for the arrival of the bass in force.

Captain Fran Verdi on the “Francesca Marie” had a crew of hard working anglers fishing in the Red Men’s striped bass tournament last weekend. Despite putting long hours and some hard work into his fishing, Captain Fran was unable to coax any bass into his boat. There were a total of 31 boats entered in the tournament, and only two striped bass were weighed in.