I’m still a blatant  “half full” type but I’m watching fall drain down the toilet. You have to realize the lousy mullet run was a ball kicker for many of us. Now, even trying to net peanut bunker is a pisser, due to winds and (more so) storm tides, bayside.

There is some upbeat news today. That huge swell from yesterday was knocked down to size form these wave-flattening west winds. It’s barely 3 to 4 feet -- and dropping.

The water hasn’t cooled, though. It’ll be 62 to 64 degrees for the upcoming Striped Bass Derby, sponsored by the Sea Shell Motel. It’s running Friday, Saturday and Sunday.  I’m guessing the most northerly reach of the event’s parameters – the Governor’s Mansion  IBSP) -- will be heavily worked. I’d like to hype the shoals off LE and BH inlets but that’s a tough call. At the same time, the waves might have dropped enough for bunker balls to organize off LBI (IBSP) beaches. That could activate the weigh-in board in nothing flat. I'm guessing eel-appeal might also play into many a contestant's gameplans.

Here's some info on the Derby.

Friday October 24th Welcome Party - 1 hour open bar (7:00 – 8:00) with
hors d'oeuvres for captains and registered anglers. Cash bar open to general
public. Captains meeting 8:00 PM, at the Sea Shell. Entertainment by “The
Impulsives”.
Friday Oct. 24th Fishing starts: 9:00 PM, and continues until final weigh-in
at 12:00 noon, Oct 26th at the Sea Shell.
Saturday Oct 25th 6:00 to 8:00 PM Cocktail party with hors d’oeuvres for all
captains and registered anglers. Open bar 6:00 to 7:00, cash bar open to the
general public.
Sunday Oct 26th 10:00AM - 12:00 Noon - Final weigh-in
12:00 to 2:00 PM Fish Fry for all captains and registered anglers.
Friends and family are welcome for fish fry ($15.00). Cash bar
12:00 to 4:00 PM, with entertainment by “The Pickles”.
2:00 PM awards ceremony
Rules • Start fishing: 9:00 PM Friday Oct. 24th
• Final weigh-in: 10:00 AM - 12 noon Sunday, Oct 26th NO ALIBIS OR
EXCUSES ! (AT&T cell time), when clock strikes noon, weigh-in is
over.
• Fishing limited to inshore waters within 3 miles of the beach. North
boundary – Governer’s Mansion on Island Beach State Park. South
boundary – Trump Taj Mahal Atlantic City .Western boundry - The
Garden State Parkway.
• All fish must be caught on the captains boat, and must be from rod and
reel
• Only one fish per boat will be eligible for a cash prize, with the
exception of the new “TOP TWO” and the “TOP THREE “ prizes.

As for the surf casting side of things, I’m seeing much better potential than yesterday. I’ll be plugging the lee sides of some jetties, despite off-color water. To compensate for the low-viz, I’m going with the noisiest/largest poppers and swimmers – it’s time for me to break out my Tom White plugs. Dannys should shine if there are any bass out there coming in close for any storm-, loosed surf clams. Of course, I’m clueless as to where our once abundant near-in surf clams have gone. When’s the last time you've seen an old-fashioned wash-up of clams, so thick they covered the beaches – and even gulls won't eat another one?

Back to the roiled surf. I also like big bright plastics on larger jigheads – up to an ounce, or even slightly larger, fished on medium-weight surf gear. With today’s shade of sea, white jigheads and plastics will work, especially when some white bucktail is added to the look. Yes, all bucktail should be white or tan, via nature, but it now comes in every shade humans can dye it.

Admittedly, this is now prime chunking and clamming bait times. Reluctantly, I have brought my heavy gear out of attic storage. Now all I have to do is borrow a few single hooks off someone. I'm not sure they make them any longer. I have to pitch public thanks to folks helping me with my website’s expense. Every single penny goes back into the cost of keeping it up and updated. And also a thank to those who have helped in the past.

Along the thanks lines, here’s to Wilber who sent me a fabulous box of sputnik sinkers he crafts and sells on eBay -- got to eBay and type “sputnik sinkers spider sinkers” and look for a “Mount Holly NJ” send-point. These sinkers are the best in the business -- and part of my motivation to return to bait fishing. Bring on the currents.

No, this is not a fair "point count." That's just a mutant buck. 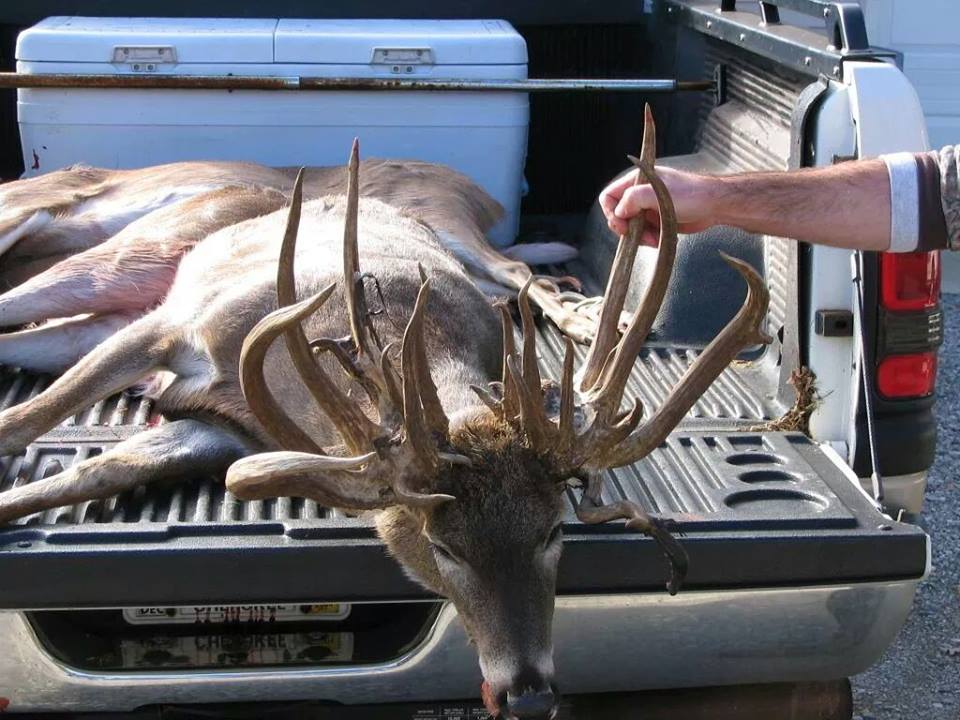 Here is first batch going up. All midnight blues in 1oz and 1.5 oz all bucktails built on heavy Duty mustad hooks with hackle hair and 2 toned buck tail hair. Will be doing many more batches of different colors down the line. All tied by my girl
Svetlana Messick
price is $7.50 a piece shipping will vary.

If you have a gardening bone in your body, you have to try the world-class flowers from my buddies up in New England -- with fishing roots here on LBI. Your order will be delivered to your shop or home at the correct fall planting time.

Our highly-regarded mixes of tulip bulbs allow you to coordinate your plantings to guarantee successful, car-stopping spring displays.

Our annual full-color catalog is an informative and valuable reference tool for the planting and care of spring flowering bulbs.

By completing the information below you will be on the list to receive a copy of the 2014 COLORBLENDS catalog. You will receive your copy in the mail within 10 days.

Please mail a catalog to:

The reef and wreck fishing is hot, and stripers are about ready to break loose.
Despite some brisk winds and ocean swells, the captains of the Beach Haven Charter Fishing Association were very pleased to see the season for black sea bass re-open. Trips to the local artificial reefs and inshore wrecks were very productive ones with large numbers of sea bass and porgies in evidence along with several other varieties of fish.

Captain Gary Dugan of Irish Jig Sportfishing began a trip recently in the Mullica River drifting live baits for striped bass. There had been reports of bass being taken in the river both by trolling Stretch lures and drifting live eels. Captain Gary came up empty handed and decided to head out into the ocean despite some rough conditions. That turned out to be the right move as his party ended up with some very nice porgies between 12 and 18 inches in length. They also caught a decent amount of sea bass and kept two of them for dinner.

Captain Carl Sheppard had the “Star Fish” booked last weekend for Eric Burr and a bachelor party of 11 members. Despite the rough seas, the group wanted to brave the conditions and was glad they did. Their first stop was a wreck about 7-miles out which showed fish on the fish finder but with little interest in biting. A couple more wrecks were pretty much the same although they used 6 different baits which did catch a couple of porgies and some small sea bass. Captain Carl decided to try the Little Egg Reef, and that proved to be the right choice. They drifted until they had hits on all the rods and then anchored up tide of that spot. Within 5-minutes they had continuous action. The sea bass averaged one keeper for every three caught and reeled in a large number of porgies, which also had many throwbacks. In addition they boated some skates, dogfish, and then bluefish ranging from 6-ounces to 2-pounds. In addition, they noticed a large striped bass rolling on the top of the water. By the end of the trip they had a cooler filled with fish.

Captain Fran Verdi decided to take the “Francesca Marie” north looking for stripers. He trolled all the way from Long Beach Island to Seaside Heights. They ended the day with no bass but did manage to pick up some bluefish. Captain Fran said the water was still a warm 63-degrees. He anticipates this weekend as the turn-on time for the bass bite to start.

Additional information on the association can be found at www.BHCFA.org

The following is simply to show the extent of the debate -- in both directions -- over climate change ::::

Climate change PROVED to be 'nothing but a lie', claims top meteorologist

THE debate about climate change is finished - because it has been categorically proved NOT to exist, one of the world's leading meteorologists has claimed. Climate change has been 'disproved' and polar ice is 'increasing' [ AP]

John Coleman, who co-founded the Weather Channel, shocked academics by insisting the theory of man-made climate change was no longer scientifically credible.

Instead, what 'little evidence' there is for rising global temperatures points to a 'natural phenomenon' within a developing eco-system.

In an open letter attacking the Intergovernmental Panel on Climate Change, he wrote: "The ocean is not rising significantly.

"The polar ice is increasing, not melting away. Polar Bears are increasing in number.

"Heat waves have actually diminished, not increased. There is not an uptick in the number or strength of storms (in fact storms are diminishing).

"I have studied this topic seriously for years. It has become a political and environment agenda item, but the science is not valid." Man made climate change is a myth according to Coleman, inset [AP]


I have studied climate change seriously for years. It has become a political and environment agenda item, but the science is not valid

Mr Coleman said he based many of his views on the findings of the NIPCC, a non-governmental international body of scientists aimed at offering an 'independent second opinion of the evidence reviewed by the IPCC.'

He added: "There is no significant man-made global warming at this time, there has been none in the past and there is no reason to fear any in the future.

"Efforts to prove the theory that carbon dioxide is a significant greenhouse gas and pollutant causing significant warming or weather effects have failed.

"There has been no warming over 18 years."

US News and World Report noted that many of the world’s largest businesses, including Coke, Pepsi, Walmart, Nestle, Mars, Monsanto, Kellogg, General Mills, Microsoft, and IBM, "are now engaged and actively responding to climate science and data."

Mr Coleman's comments come as President Barack Obama came under fire from climatologists as federal data revealed The United State's energy-related carbon pollution rose 2.5 per cent despite the President's pledges to decrease it.

President Obama told 120 world leaders at the United Nations climate summit last month that America had done more under his watch in cutting greenhouse gases than any other country.

Despite this, the Energy Information Administration's Monthly Energy Review showed an increase in the use of energy from coal.
World leaders have pledged to keep the global average temperature from rising two degrees Celsius above pre-industrial levels to prevent the worst consequences of climate change.

The US, along with the UK and other developed countries, is expected to pledge further actions on climate change early next year. There has been no recorded global warming for 18 years [GETTY]

He added: "No chemical compound in the atmosphere has a worse reputation than CO2, thanks to the single-minded demonisation of this natural and essential atmospheric gas by advocates of government control and energy production.

"The incredible list of supposed horrors that increasing carbon dioxide will bring the world is pure belief disguised as science."

In 2010 a high-level inquiry by the InterAcademy Council found there was "little evidence" to support the IPCC's claims about global warming.

It also said the panel had purposely emphasised the negative impacts of climate change and made "substantive findings" based on little proof.