Below: A shot I took a few years back. If this sight doesn't get you pumped -- you're dangerously deflated. Honeybees are vital to US agricultural production, but they're dying by the thousands

Tell Congress to pass legislation to stop the use of pesticides that are killing...

Thursday, October 16, 2014: It begins … slow like. Today is the start of a truly extended stay of fallish conditions. While the chill will fly by weekend’s end, far more significant will be the westerly winds and greatly improved surf fishing – and even boat fishing – conditions. The boat fishing will have to suffer through some stiffer winds but at least we shouldn’t see fun-killing onshore storm conditions. And if you sat the weather hasn’t been a bitch for a month and half now, you haven’t been hereabouts.

Understand that protracted west winds can also create incredible doldrums for bassing and bluefishing in the surfline. The thing is we’ve had such crappy fishing of late that any change is worth a try.

At the same Octoberish time, west wind seas open up snag-and-drop conditions for boat anglers chasing the bunker pods just past the LIB’s and IBSP’s sandbars. In fact, bunker baitballs tend to expand in size the longer west wind conditions hang around. That is all part of the baitfish’s survival-in-numbers defense strategy. The more fellow bunker to circle with, the better chance you won’t be the exact bunker eaten. The worst thing for a batch of bunker is getting separated from the big-ass baitball swirl – and driven toward the beach/shallows. Of course, we surfcasters aren’t overly opposed to such separations. 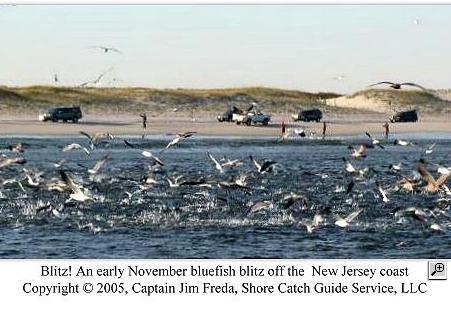 Which brings us to beachline blitzing, which is always an ultimate blast when the winds are blowing offshore and relentless bass and blues have pinned the bait smack-flush to the sand – as we safely charge after the action in our buggies. (Hey, all anglers have to be blatant optimists. This could be a blitzacious fall -- after  few falls that weren’t all that blitzified.

Speaking of bait and blitzes, the better chance of getting big fish within surfcasting range for the next few weeks is not via big bunker but peanuts, rainfish, spearing, sand eels and even late-running mullet. Right before the last blow, I saw those telltale reddish water clouds of rainfish in Holgate. Also, looking at darker clouds in the water, I just nicked a ball of peanuts throwing my cast net and filled it to the gills. 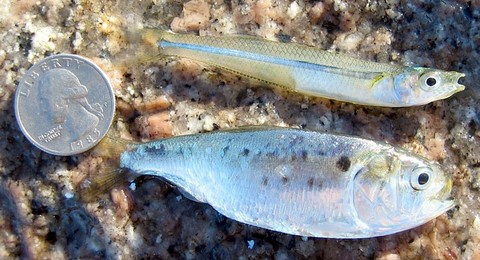 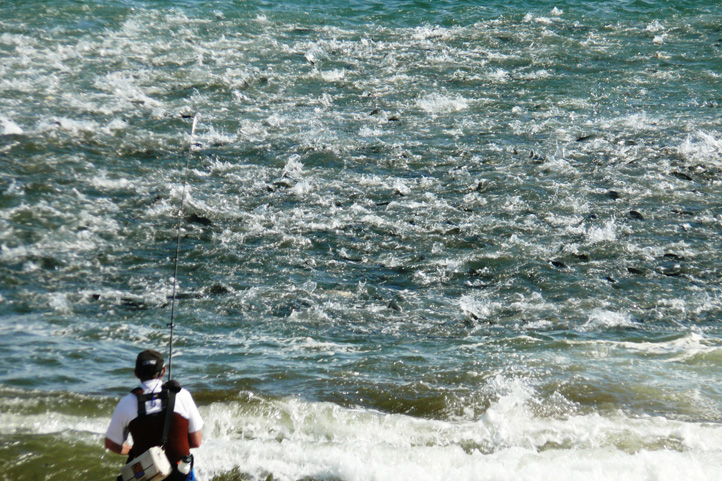 Bad news, America: The Polar Vortex is coming back!

The Northeast is expected to get slammed with below-zero temperatures

Cold air will surge into the Northeast in late November, but the brunt of the season will hold off until January and February. The polar vortex, the culprit responsible for several days of below-zero temperatures last year, will slip down into the region from time to time, delivering blasts of arctic air.

“I think, primarily, we’ll see that happening in mid-January into February but again, it’s not going to be the same type of situation as we saw last year, not as persistent,” AccuWeather.com Expert Long-Range Forecaster Paul Pastelok said.

“The cold of last season was extreme because it was so persistent. We saw readings that we haven’t seen in a long time: 15- to 20-below-zero readings.”

Snow accumulation is also expected to be higher than usual, with especially heavy hits to Philadelphia and New York City.

According to CNN, a polar vortex is the “circulation of strong, upper-level winds that normally surround the northern pole in a counterclockwise direction.” Generally, these winds are confined to the region, but the winds have been known to distort, and dip much further south than usual. 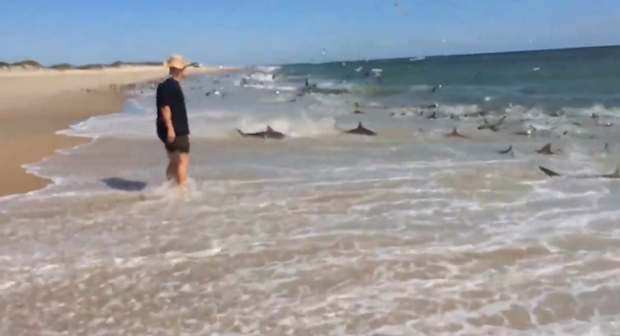 Below Candy S. and myself, 1981. I'm Halloweening, wearing a mask made of Grade-A sculpting clay from then-Cox's Pit, now Perry's Lake adult community (Manahawkin). I used to supply some world-class NYC sculptors with the white, fine-grained clay from that abandoned pit. And they paid royally for any and all the clay "bricks" I cut from select clay layers. At that time stint in my life, I was annually Hawaii bound so I never parlayed that insatiable NYC demand for Cox's Pit clay into what could have been a highly lucrative side business. My main job at the time was something of a commercial diver -- a treasure hunter to be exact. Hey, treasure comes in many forms, even clay. 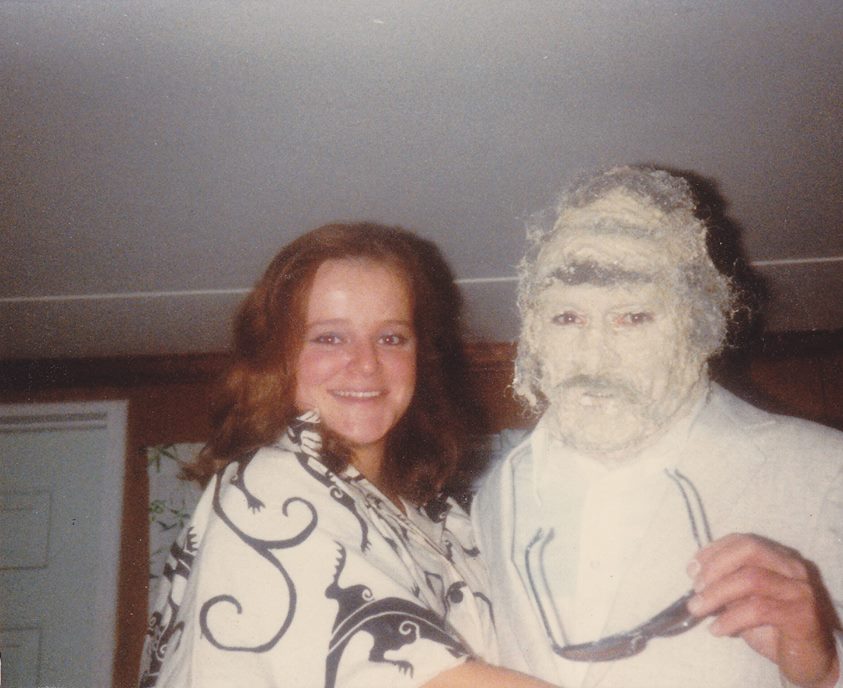 In response to the destruction caused by Superstorm Sandy two years ago, as well as the announced availability of federal funding for coastal hurricane and storm damage reduction projects, Governor Chris Christie issued Executive Order No. 140 in September 2013. Among other things, the Executive Order directed the Attorney General's Office and DEP to take whatever action was required to obtain property easements that would enable a series of projects involving beach widening and construction of engineered dunes along the New Jersey coast.

At the time Executive Order 140 was issued, the State needed approximately 2,850 public and private easements. As of today, approximately 2,400 of those easements have been obtained, and vigorous efforts to acquire the remaining 400 easements are continuing.

(Below: 48 hours after Sandy. Just me and this gal on the beach. 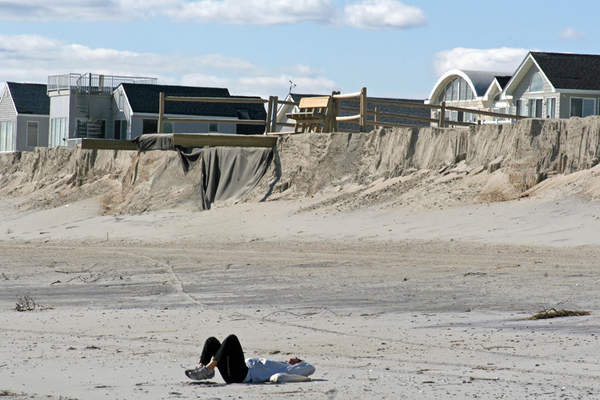 Acting Attorney General Hoffman explained that the vast majority of easements obtained to date have been provided voluntarily by property owners.

"The property easements we have obtained, and the easements we still seek, are vital to coastal protection efforts that benefit all New Jersey residents," Acting Attorney General Hoffman said. "We appreciate that many property owners - clearly mindful of the destruction caused by Superstorm Sandy -- have unselfishly donated easements for the greater good rather than engage the State in protracted litigation. But to those who continue to hold out, our message is that we remain committed to acquiring these easements as expeditiously as possible, and -- consistent with a landmark Supreme Court decision issued in 2013 -- without paying a king's ransom as compensation."

"Governor Christie and I have been extremely clear on this matter," Commissioner Martin said. "Sandy taught us sobering lessons about the critical need for beach and dune systems as an integral part of making New Jersey more resilient in the face of future storms and floods. We commend the property owners who have done the right thing by working with us and understanding their civic responsibility in helping to protect their communities and their neighbors. Those who continue to hold out must step up as well, or we will take necessary steps to secure those easements."

According to Acting Attorney General Hoffman, the State's success in obtaining voluntary easement donations has been the result of concerted outreach efforts, which have included letters, public meetings, private meetings and, in some cases, the commencement of condemnation proceedings (but not actual litigation).

In addition, the towns of Ocean City, Longport and Middletown - at the direction of the Division of Law - have adopted Resolutions under the Disaster Control Act taking approximately 20 easements that were not provided voluntarily by property owners. The State also has issued an Administrative Order taking approximately 15 easements needed in Elsinboro.

A significant reason why so many of the 2,400 required easements have been obtained voluntarily is the landmark decision of the New Jersey Supreme Court, issued in July 2013, that resulted from strong advocacy by the State regarding how to determine compensation for easements needed for an already-completed shore protection project in the Borough of Harvey Cedars.

One of those easements - an easement sought from beachfront property owners Harvey and Phyllis Karan - was obtained for $1 as part of an eventual legal settlement that ended years of litigation. The litigation process began with the Borough seeking to obtain an easement from the Karans to build a 22-foot-high dune on a portion of their lot. The municipality used its power of eminent domain to acquire the needed easement. However, the parties could not agree on fair compensation and ended up in court, where the DEP ultimately became an intervenor.

A trial jury placed the value of the Karan's easement at $375,000, and the Appellate Division upheld that verdict. However, on July 8, 2013, the state Supreme Court overturned the Karan's $375,000 jury award and ordered a new trial. In reversing the jury award, the Supreme Court held that homeowners who are subject to a property-taking on behalf of public projects "are not entitled to a windfall" that disregards the protective benefits of those projects to their own property. The Karans subsequently settled, accepting $1 as compensation.

The State was confronted with another legal challenge by Harvey Cedars residents Victor and Carolyn Grossier, who sought a total of $800,000 for their beachfront easement, including $600,000 in damages. In June of 2014, however, a jury determined that the protective benefits of the project outweighed any damages, and that the homeowners should receive only $300 in compensation.

. beach widening and dune construction from Brigantine Inlet to Cape May Inlet-Absecon Island in Margate and Longport;

If you have questions about the Action Plan please email DEPbarnegatbayinfo@dep.state.nj.us.