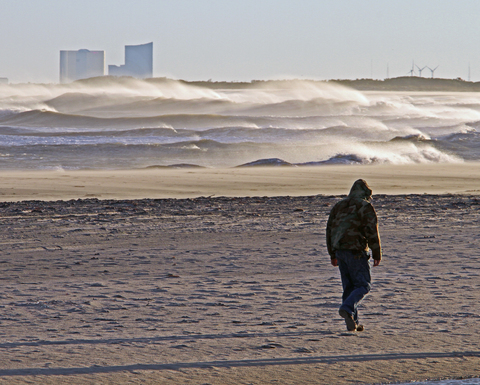 Below: Photo-bomb of The Year winner!!! Shares prize money with his dad.

According to the USACE they are targeting the Beach 1 / Wooden Jetty area for a supplemental fill sometime in November. There will be a small amount of sand/$s left on the contract when they are finished with all the areas in Long Beach Township to the north. They will be applying that leftover amount to the eroded areas in southern Holgate. They have also been in contact with the Federal Fish and Wildlife people to try and extend the fill into the preserve to taper the end more smoothly.

Thursday, October 13, 2016: It doesn’t get much better than this for fine fall fishing conditions. As to that little matter of no fish, well, you can’t have everything – where would you keep it?

And you ain’t seen nothing yet. Mulling over the maps, there’s almost no way we can avoid a stretch of weather o mild the record books are shaking in their fall wear. After maybe a couple-day stint of normal autumnal chill, systems are setting up for possibly an entire week of above to much-above air temps, though we could see a south-wind, onshore influence.

So, lather on some sunblock, grab some beach-suitable reading material, like The SandPaper, and plop down to do some low-attention rod watching. If you’re lucky, a small blue might perk up your angling attention.

I should also mention a mean – as in minimal – showing of small stripers in the surf. I heard of four being caught yesterday excluding any Barnegat Inlet action, which is a highly secretive sector. They were one-handers, referencing how they’re held when unhooking. All were caught on plugs or jigs. The surf is down, though still two to three feet with larger sets. The Nicole swells are oddly lacking but will surely show. Hurricane swells are not as roilsome as, say, wind swells of the same size. They come and go. Also, the don’t muck up the water color, which is a decent look today, though not clean-clean.

The hurricane swells are also a bugger for boaters. In fact, should Nicole swells really kick in, we reach that red zone around the inlets and, especially, the shoals, where the Wahoo hulls like to troll this time of year. Hurricane swells are absolutely unpredictable, especially the cleanup sets. As this surfing term implies, they come suddenly and take out anything that is sitting inside too far.

Over the decades, we’ve had many tragic boat accidents caused by boaters thinking the coast is clear only to have what looks like a tsunami show up out of the blue. 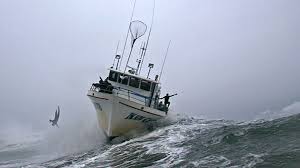 I cringe when those hurricane-based outside sets are erroneously called “rogue waves,” a whole other killer wave animal that only occurs well out at sea. Set waves are simply the bigger waves of the day, always associated with an ongoing swell. They’re trickier during pulsating hurricane swells, which can pause for an extended period of time.  An impatient or uninformed boater sees sheer calmness and proceeds as if the ocean is a lake -- the emergency channel is Channel 16 VHF-FM (156.8 MHz).

Per BOAT/US: “The lowly VHF radio remains the most versatile communication device for a boat. It is the only communication device many pleasure boats are equipped with, and it is required by law before you can put any other marine radio aboard. Due in part to its universality, the VHF is arguably the most valuable piece of safety gear aboard, delivering any call for assistance to dozens or hundreds of nearby listening ears.” DON’T LET THE LEAD FLY: A quick play-nice note to anglers. For many days/weeks to come there is going to be a huge deal of interplay between surfers and surfcasters – usually not pretty interplay.

I’ve been on both sides of this often contentious arrangement. There is no simple answer short of honorable interplay.

With the arriving swells, most of the growing number of waveriders will simply be getting in and out of the water near fishing lines; the waves being out on the bars. However, a rider at the end of a ride – or heading back to the beach – can come into what might be called an anglers’ range of casting influence.  Go with the flow – and don’t throw.

Hey, at least NJ surfcasters don't have this to contend with ... 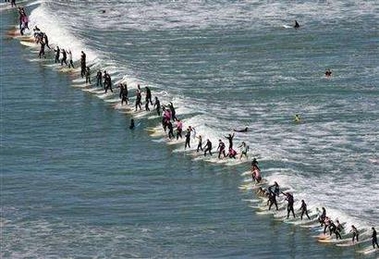 I’ve been in the water when anglers have intentionally heaved lead at me. Not knowing I’ve surf fished since birth, they felt they could coyly fall back on the old, “Oh, I didn’t realize what I was doing.” Yes, you did. And, in my case, it was a big mistake. But I won’t get into that misadventure.

It’s a no-brainer that even smaller sinkers can become a deadly missile. I don’t know if anyone has ever measured how fast a hard-flung sinker is traveling but upon striking soft skin it can surely make a mess. If you disagree, ponder somebody from your family being in the water and having sinkers coming at them. I know that’s odd but it’s not the worst thing to put the lead on the other foot/head.

Below: Hell, this sinker is even shaped a bit like a musket ball ... I’ve heard of surfers getting hit by cast sinkers – and, in one case, the court case afterwards. The old and pseudo-innocent “I didn’t realize” failed miserably with the judge. It came down to:

“Did you know people were in the water where you were casting, sir?

“Then you were recklessly endangering lives by casting sinkers toward them. You will pay the damages.”

It might sound like I’m on the side of the waveriders but that is absolutely not true. In this case, only the surfcasters have the ability to inflict serious bodily harm. I’m openly on the side of nobody getting hurt, possibly critically.

It is likely politically highly incorrect to make this point, but there have never been so many female waveriders. That alone might lessen the aggression of casters wanting to randomly deliver a lead message to a group of surfers in the water. What’s more, I’m betting the courts would be doubly pissed should a female waverider be the victim.

Along with being a potentially jailable offence should your aimed sinker find flesh, you’re actually targeting entire families, a concept I learned in Hawaii. In the aftermath of an ugly incident, you’ll likely meet the victim’s family – and friends.

That brings us back to the interplay side of things. 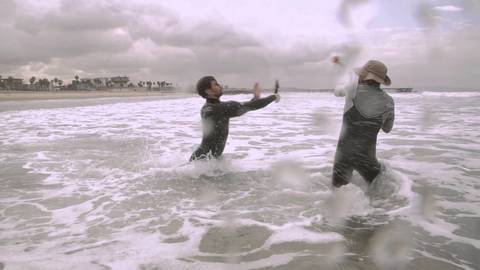 I side with the anglers and the bitter frustration felt when waveriders disrespect their space on the beach – when they could have easily paddled out somewhere further away. Then, we get down to the waveriders either not realizing their imposition or, face it, not giving a rat’s ass.

Now we get to the mentality meat of the matter. Be it age or an overall attitude, many surfers are rowdy to the hilt. I know I was – for decades on end. To that point of conflict (and disrespect), I have to go a bit Beatle-esque by simply suggesting: let it be. It’s not worth mixing it up -- and ruining everyone’s day.

Below: Surfers can be mighty rowdy ... all on their own. Below: At any moment, family members can jump into beach brawls ... 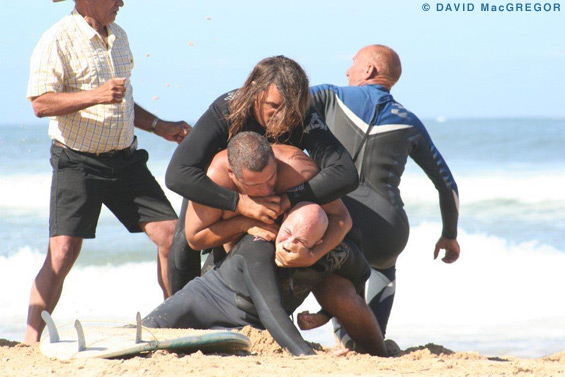