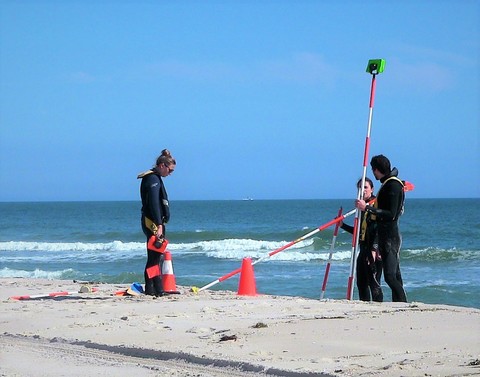 Thursday, October 11, 2018: We’re getting side-slappped by Michael. The ex-cane’s first and furthest outer rain bands hit us before some places a lot closer to the fading cyclone. There is more to come. We could see some road-flooding squalls. The unstable tropical air could also spawn some aggressive stormage in the form of highly scattered lone-wolf lightning strikes, the type that seemingly come out of the blue, scaring the crap out of those nearest the bolts.

Once Michael moves rapidly off the Carolina, things turn seasonably chilly … finally. Honking hardcore west winds should kick in by tomorrow and impact us all weekend, offering fine surfcasting conditions, if you're into casting, i.e. plugging.

Despite the arriving cool-down, the nighttime low temps will still not drop much below 50. In many a year past, we have already seen frost on the pumpkin by now. I hate long-range forecasting but I see no frost the remainder of this month. Of course, I might just be saying that knowing how the weather personally enjoys proving me wrong. Then, again, if it reads this blog.

A quick tip to those somewhat new to surfcasting. The bluefish count is so insanely high that it truly is pretty much the only show in town. If you're fine with nabbing them for eating or smoking, I'm doing decently on small metals and teasers. However, nothing works as well as mullet rigs and mullet. I'll be the first to admit that bait-tossers fishing near me as I plug catch three fish or more to my one. I won't be ready to chunk until I see the whites of big bass eyes.

If, like me, you seek a couple shoreline stripers, larger plugs can be called into duty. Poppers and surface swimmers match the hatch (fleeing mullet). Baitwise, you might attract bass by going with bunker heads, or large bunker chunks. Think clam baits to avoid blues entirely -- in most cases. While I always down-talk clams for bigger bass, I've been proven wrong with clam-sucking stripers of over 40 pounds. That said, with even a 28-inch bass ineligible for big prizes in the Classic, clams-away!

Related to the weather, the forage fish buildup in the bay might get flushed out by a combination of the cooler rainwater runoff and the modest air-temp drop. Right now, the peanut bunker and, to a lesser degree, the mullet are comfortably settled into the mild bay.

It’s hard to relate to this but migrating forage fish, like mullet, are swimming blind. It might even be said they’re driven on blind faith (great group, I should mention). Their migratory motivation is based on nebulous inner instincts. There is no “Next stop … the South Atlantic Bight” in their limited mindset. It’s all purely unknown out there, an unknown that soon attacks them something fierce.

Studies indicate that water temps and length of days first spark the migration, but those initial motivations lose some of their oomph once the young-of-year fish have traveled a goodly distance along shore. By the time mullet from our water to our north reach NJ, an “Are we there?” confusion sneaks in, especially when enter mighty mild waters, as we now have to offer. Obviously, newly emerging keep-on-trucking instincts -- along with eventual temperature drops -- respark the mullet into moving onward and southward.

It is highly unlikely that any of our y-o-y mullet ever come back this way – except in spirit, via their larval progeny. A case can be made that larger finger" mullet we net might be second-year fish.

Of note, for a number of winters, I would throw cast net in the ditches/channels off the Road-to-Nowhere in Manahawkin. I netted overwintering mullet even in the coldest months, ice permitting. Oh, they looked worse for wear, fin-wise, but I’m betting they felt they had reached the place inner urges had driven them, though likely bitching a bit about it. I released them. If they survived the winter, they might have been those second-year locals.

As to peanut bunker, the y-o-y of the Atlantic menhaden, things get a bit spilt when it comes to where they’re headed when they move out of the bay by, literally, the millions. It seems they might go either east or south.

(“The First Year in the Life of Estuarine Fishes in the Middle Atlantic Bight,” Hardcover – June 1, 1998 by Kenneth W. Able.  Available: www.amazon.com/First-Estuarine-Fishes-Middle-Atlantic/dp/0813525004)

It appears the fast-growing y-o-y bunker overwinter in offshore waters common to those frequented by adults of spawning age. Intermingling doesn’t seem likely, based on winter observations of adult bunker pods, sans smaller bunkies. There might even be a bit of a mystery as to where y-o-y and year-class bunker go prior to achieving adult/spawn size.

Speaking of bunker, should we learn to dine on them? You know, to feed the world? ......

I did, I did eat a bunker. Not only did I eat a bunker, I managed to convince one of America’s top chefs to put bunker on his tasting menu.

Blue Hill at Stone Barns in Tarrytown, New York is run by Dan Barber, a chef who has turned his very high end restaurant into a showcase for very unusual things. Disgusted by the fact that Americans dump roughly half of all the food we produce in the garbage, Barber and his business partner and brother, David, temporarily closed the Manhattan Blue Hill and reopened it as “wastED”–a pop up incarnation that only sold food scraps. There was a burger rendered from the shavings left behind after juice extraction and on the seafood front he wrote me extremely excitedly one day about “skate wing cartilage fries and salmon bloodline carpaccio”. Based on this, I figured that if there were anyone who could transform a menhaden, it would be Barber.

I’d had a fisherman in Jamaica Bay, Queens seine about 100 fish and I picked them up in Howard Beach in the early morning. Sean Barrett of the community supported fishery Dock-to-Dish met me at Blue Hill with another 100 he’d plucked from the bays near City Island. In each case I’d had the fishermen ice down their catch immediately upon capture. Menhaden are extremely high in omega-3 fatty acids and as such are quick to go rancid if not properly handled. I’d so often seen them crammed into the fetid holds of industrial vessels and shoveled by the thousands into grinders and evaporators that I’d never considered how beautiful they are. As the Mexican sous chefs at Blue Hill lay them delicately out in trays and wheeled them into the kitchen I admired their golden shimmer. When they filleted one, the flesh looked stunning, suitable for $10-a-bite sashimi.

But then we confronted the bones.

Adam Kaye, a South African who worked as Blue Hill’s culinary director started plucking at the bones with a sort of oversized tweezers. He tried another angle and still there were more bones. A bead of sweat appeared on his brow.

“Gosh there are all sorts of bones in here. Little ones big ones. José?” he called to one of sous chefs. “Come have a look at this.” José came over and shook his head at the carcass, thinking probably of the long hours ahead to render the fish edible.

Kaye threw a piece of bunker into the frying pan. It sizzled and quickly turned opaque. Kaye delicately lifted onto a plate of blazing white china and we dug in. The flesh was flavorful and moist. Delicious actually.

But full of bones. After filleting another Kraye held up the carcass in wonderment.

The art of boning a menhaden.

“Well, José” he said, “we’ve got 200 of these. Hopefully we’ll get the hang of it by fish number one hundred and ninety eight.”

The next day I returned to Blue Hill after the sous chefs had had a go at it. The Chef de Cuisine, a Frenchman named Bastien Guillochon confirmed that it had been a struggle. “We try to clean one fish for three hours,” he said.

Dan Barber who had just put on his cooking whites for the noonday service puzzled over the problem. “We could make it work. But we need a story.”

I explained to Barber that Atlantic menhaden are the largest single species fishery by volume in the continental United States. Something like 1.6 billion pounds of it were caught in 2015 alone. And no one ate it. All of it was turned into industrial meal. All of it was fed to salmon, pigs and chicken.

He set his team to work.

Out back nearby an old timey, handcrafted oven, a man in a straw hat worked a fire and rendered the menhaden into a plank of smoky char. I told him that once upon a time menhaden were used entirely for fertilizing corn.

“Huh,” the artisan smoker dude said, “that makes me think we should go with a kind of smoky corn-based mache. That’d be cool.” That recipe is still a work-in-progress.

Many ideas were thrown out. At one point I was presented with a menhaden burrito wrapped in a wafer thin sheet kohlrabi. I tried it and felt the still persistent crunch of bones everywhere.
In the end the only palatable thing to come out of the whole experience and the only way menhaden made it onto the Blue Hill tasting menu, was when it was whipped indistinguishably into a cream and served with cucumbers.


Menhaden on the menu at Blue Hill.

Which is why the next day I got in touch with that old Fulton Fish Market monger. If he knew how to cut a shad he might know intimately the complicated bone structure of a menhaden. And if he could get the bones out, maybe, just maybe we could make the case that it is a waste of resources and indeed an entire keystone species that feeds dozens of major predators up and down our coasts to boil it down into oil and render it into chicken feed. More menhaden would mean more bluefin tuna and striped bass. More osprey and more humpback whales.

“So Bob,” I asked pleadingly to the monger, what do you think?”

A long pause ensued with that frustrating triple dot of text message wait time hovering. And then finally.

By the time I finished my negotiations with the Fulton Fish Market monger for a cutting session, the menhaden season had ended. But my fishmonger has promised me that his knives are sharp and ready. That he’s been refreshing his memory on the ins and outs of boning a clupeid. Barber has assured me he’s good for another go at Blue Hill and maybe his chefs can learn a thing or two from Bob.

Come April when the menhaden show up in our bays and harbors again, we’re gonna take another shot.

Menhaden in their restaurant trays.

Paul Greenberg is author of a forthcoming book on omega-3 fatty acids and the marine food web, titled The Omega Principle: A Journey to the Bottom of the Marine Food Web. It is due out by Summer 2018. The accompanying Frontline documentary is slated for release in early 2017.

Don't be that guy! Lmao

What are these called again?(s)