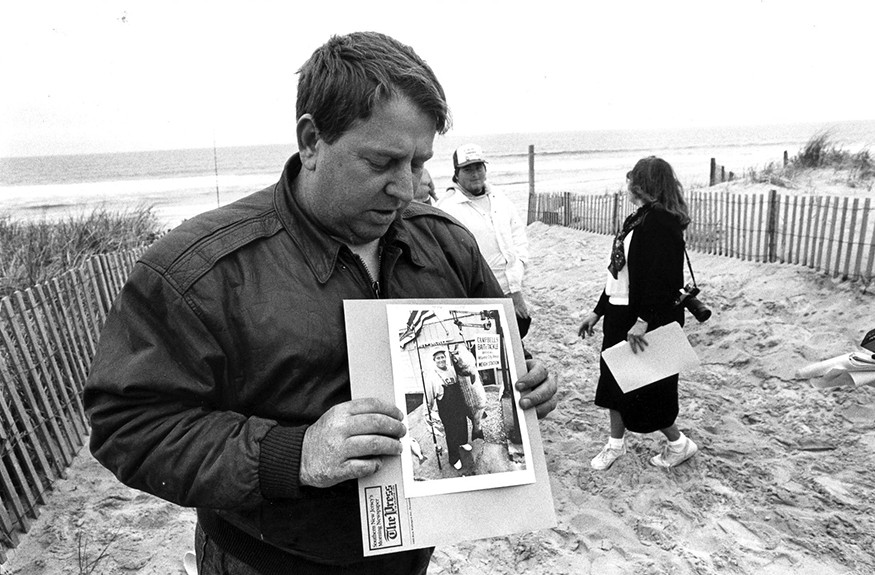 (Above is a photo of Al McReynolds chatting with me on the beach in Ship Bottom. It was at this point he was already sensing the world-class catch might become a burden. The following year he was already calling it a horror.)

I did get updates from the few folks surfcasting in and around that storm day and yesterday’s west winds.  I can assure there were no heavy hooking sessions. What we have gotten is a cool down – much needed.

As I always point out, it takes way more than a few chilly nights to talk the ocean to drop it by 10 degrees. Still, the mid-60s now in the surf is plenty cool enough to supply oxygen to bigger bluefish and bass.

The Holgate front beach, down near the dead forest, took a solid hit from the one-day storm. Getting to the Rip got tenuous at best – and pretty much unmakeable at its worst. Hopefully, the upcoming prolonged period of hard west winds will allow the beach to self-repair. Those winds won’t be the best thing for angling, though.

There was another Classic weigh-in. Bringing the grand Classic weigh-in total to 2. Yesterday, Tom Valerio, BH, used bunker to coax in a 14.31 striper, taken in Haven Beach.

WEATHER LOOK: Despite the fall feel the past few nights, don’t expect things to stay overly autumnal. Mulling over the weather maps, I see slightly above average temperatures for up to 10 days ahead – including a couple showings of very warm afternoons. Tomorrow night’s lows in the mid-30s won’t be around again for weeks to come.

Unfortunately, the forecast could mean a rather slow pick of bass, though rogue Classic-able stripers have to show soon, based on day-length alone.

For the Umpteenth time, I’ll note that even a slow pick is no big deal for the Classic. A money fish for a weekly prize -- or even a segment prize -- might be as humble as a 20-pounder. The winnings are essentially based on a curve system. When everything is low and slow, even a mere entry-level fish looms large. 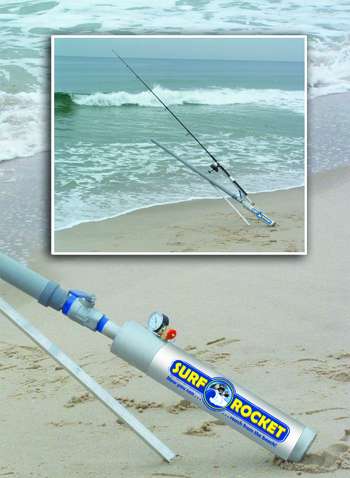 SURF ROCKET RESPONSE: On a bizarre note, I had written about the Surf Cannon (this blog and in the SP) and also saw it hyped in a tournament to our north. I then got a call from a fellow who either has one or has ordered one. He was asking if it could be used in the LBI Surf Fishing Classic.

Seems so. There are no emphatic distinctions on how bait can or can’t be delivered into the water. A cannon seems just fine – though it does seem a bit odd even saying that. Truth be told, how is it that different from a balloon delivery, very popular around the world?

Also, with the arrival of drones, I can already envision remotely controlled aircraft taking out our bait -- fishing on the fly. Someday every surfcaster will have a small drone next to him on the beach -- and a little smoothed down sand runway.

Admittedly, there might soon come a day when tourney committees will have to take into account peculiar bait delivery systems, but, for now, the sky’s the limit.

A Burst of Reality: To cool those jettison-happy jets a bit, many of the largest bass and blues ever entered into the derby/tourney/Classic have been caught within pissin’ distance of the beach. Not that many years back, Tony C’s grand-prize jumbo chopper – close to, if not the largest blue ever entered -- was taken in a couple feet of water just off the beach. It was in so close it literally ran itself right onto the beach after being hooked. My notorious 50-pound striper was hooked literally at my waist (I had waded out a bit), after I had fought another fish almost in, lost it right next to me and had the loosed school bus yellow plug instantly inhaled by the biggy – all this in the midst of a bass-battered bunker, pinned tightly to the shoreline.

I do see the benefits of rocketing chum out toward, say, a frenzy of working birds, way out there. Of course, with my luck, before my rocketed rig even finds water, it will have ensnared no fewer than five herring gulls, four cormorants, a couple gannets, as many pelicans and some small bird that’s so endangered I’m immediately sentenced to eight weeks in the county lock-up. Taiwanese fishing boats are flooding Japanese markets with huge catches of bigeye tuna, taken from the pirate-infested waters off the coast of Somalia, which are sending retail prices plunging.

Taiwanese fishing boats are flooding Japanese markets with huge catches of bigeye tuna, taken from the pirate-infested waters off the coast of Somalia, which are sending retail prices plunging.

The Taiwanese boats can navigate the coastal waters, where pirates have disrupted shipping lanes, in relative peace of mind after hiring armed guards with automatic weapons.

Japanese fishing boats are at a competitive disadvantage because domestic legal provisions prohibit them from employing the same kind of protection. As a result, the falling prices for tuna are just another blow to these Japanese skippers who are suffering from small catches in other waters.

"I heard the cost for armed guards for one boat was $18,000 (about 1.4 million yen) a month," said a boat owner in Muroto, Kochi Prefecture, who switched fishing grounds from the western side of the Indian Ocean to the Pacific. "The number of tuna has increased during the period fishing boats avoid those waters so they are now catching several times the amount of fish we catch. They can probably still manage to turn a profit."

The huge catches brought to Japan indicate the boats are indeed making a profit even with the additional cost of a security detail.

The Tsukiji fish market in Tokyo's Chuo Ward auctions off frozen bigeye tuna caught in waters around the world. For the tuna caught in the Indian Ocean, most of the fish is marked with the T initial that represents the fact the fish was caught by a Taiwanese boat.

The average wholesale price of frozen bigeye tuna for the period between August and October was between 850 and 900 yen ($10.80 and $11.40) per kilogram. That was about 15 percent lower than the prices for the same period of the previous year.

According to officials of Chuo Gyorui Co., a wholesale company at Tsukiji, bigeye tuna prices began falling from around May and had dropped by about 30 percent in early June.

"The effect of the huge volume of large tuna caught off the coast of Somalia by Taiwanese boats was large," said an official in charge of bigeye tuna.

According to catch certificates for imported tuna submitted to the Fisheries Agency, of the approximately 24,000 tons of bigeye tuna imported from Taiwan in the first six months of this year, 13,400 tons came from the Indian Ocean. Imports from Taiwan increased by about 8,000 tons over the previous year and accounted for about half of all imports. In May, before the waters of the Indian Ocean become more turbulent due to seasonal winds, a total of 7,640 tons was imported.

The main fishing grounds in the Indian Ocean are to the western side and larger catches are made the farther north boats go.

The Fisheries Agency also issued two notices to Japanese fishing boats after 2009 urging caution about fishing in those waters.

According to Foreign Ministry officials, there were 237 acts of piracy last year, the highest ever. While there has been a decrease this year, there have still been 70 cases of piracy so far.

The Taiwanese fishing boats are believed to have returned to the waters off Somalia from the end of last year.

According to a Japanese fishing cooperative official, a Taiwanese broker asked about the possibility of Japanese fishing vessels hiring armed guards. Three guards are employed for each boat and they come armed with automatic weapons. The basic fee covers the amount of ammunition the security detail can use. Extra fees have to be paid if it is forced to fire more rounds than the limit.

However, because domestic legal provisions apply on fishing boats even if they operate in foreign waters, the fishing cooperative official said the inquiry from the Taiwan broker was refused because Japanese boats could never take such measures.