Thursday, March 16, 2017: It’s only half over but this of the coldest Marchs since whenever

Men: Yet another reason to take up racing ... OK, so maybe that's technically two reasons.

Below; Hey, that's not a Slinky. In fact, I don't want to know what that is!

Thursday, March 16, 2017: It’s only half over but this of the coldest Marchs since whenever. And there could be yet another jab of cold next week. Then, it just might return to seasonableness, though nothing as mild as we had over a month back. I bring this up because we’re into the window of the spring bass bite.  And, yes, we did have that push of Mullica bass a short while back. Now, with upriver water in the mid- to even low 30s, we’re back to square one … awaiting a schoolie showing. Despite an alleged collapse of the New England bloodworm stocks, there doesn’t seem to be a shortage of these spring, bass fishing essentials.

I haven’t heard a peep about local winter flounder fishing, nor have I seen many/any vessels working the usual blackback holes, bayside Ship Bottom. Might it be 30 mph, cold-as-ice winds? I miss the days we used to fish the abandoned lot at the end of 6th Street … from inside vehicles. Old West Creek Charlie and the gang would throw out bait, lean their rods on the bulkhead and hang around talking story for hours and hours. What a blast! A few flatties were caught.

HOLGATE BACK TO THE BIRDS: Holgate will soon close for the season. I had so much happening on the mainland this winter that I haven’t been there lately, though it is always close, in mind. 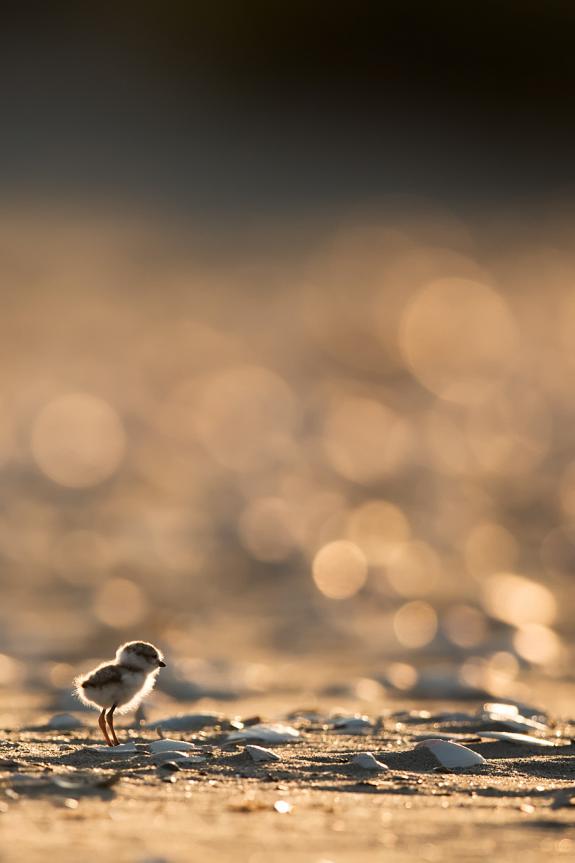 I can guarantee that last year’s record breaking showing of piping plover on the far south end will be outdone this year, due to the ongoing eye-appeal of the erosionally opened sands -- seen by the tiny birds as they migrate northward.

However, it seems that all the new piping plover attracted to Holgate often represent an equal and opposite loss of nesting plover in nesting areas to our north. The hope is younger birds add to the overall population.

While plover galore in Holgate might seem a good thing, since the sands offer such ideal nesting accommodations, there’s more than meets the eye. It’s the old eggs-in-one-basket syndrome, pun intended. The very reason Holgate has become such a plover hotpot also makes it ripe for a catastrophic multi-nest wipeout. The area’s likelihood of washover is sky high. A single storm – even one not all that large – could wash every plover egg or chick into the bay ... gull food. I would absolutely hate to see a hit like that. I’m just realistically emphasizing that the open sands of Holgate might not be the idyllic nesting landscape they appear in passing, overhead.

Hey, we’d all love to see months on end of stormlessness. 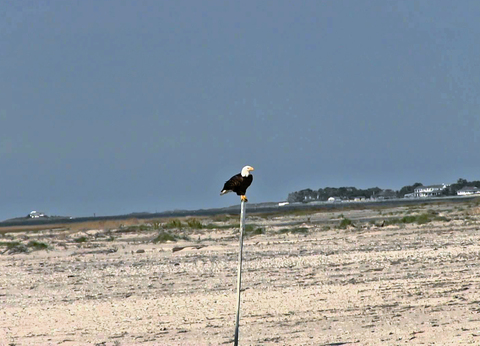 Below: The surfing beach area near the Holgate parking lot will remain open, as usual. 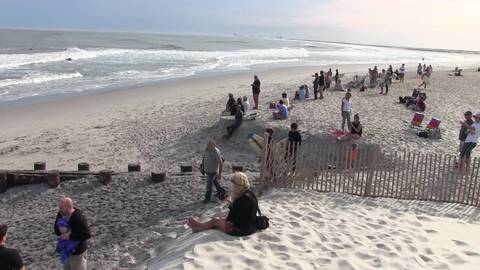 Further below you'll see a news story about a Maine man caught poaching glass eels. Among the states he stole baby eels from is NJ. I swear this could relate to a Maine-licence vehicle I saw last year near a once-popular elver gathering sight in Tuckerton.

I've been trying to monitor elver activity in some SOC locations and have had very little luck finding them. While I strongly believe the overall eel population is critically low, I'm not overly proficient at spotting them without trapping, which is illegal, even if only to get a read on their numbers. I use spotlights to get a harmless look-see.

Below: Legal NE harvesting ... though how can any species survive the removal of this many young-of-year? I'd be far more understanding if elvers, even in NJ, were conversationally harvested to be further raised in the US ... to be exported, as grown eels.

I was once contacted by a state person who read when I had previously written about this grow-your-own elver concept. He as much as invited me to undertake such aquaculture -- with state blessings. I shut-up real fast ... though I still think it's a great idea. 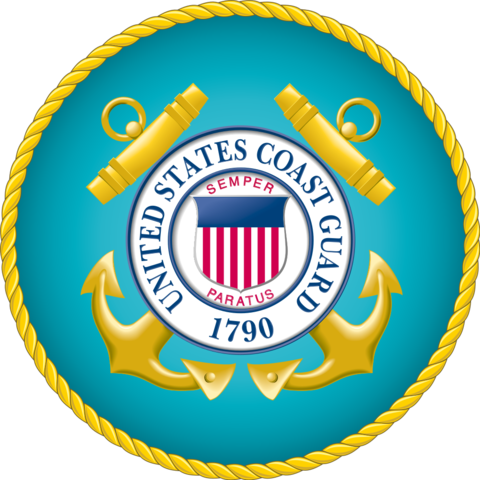 WASHINGTON, D.C. – U.S. Congressman Frank A. LoBiondo (NJ-02), a senior Member of the House Coast Guard & Maritime Security Subcommittee, today said he was pleased that the first budget outline proposed by the Trump Administration did not include reported proposed cuts to port security and U.S. Coast Guard operations.

“I am pleased we were able to convince the Trump Administration to protect the critical security missions the U.S. Coast Guard undertake each day to keep our nation safe,” said LoBiondo. “It is without dispute the men and women of the Coast Guard are doing an outstanding job, stretching the limited resources they receive now to keep our waters and ports safe. From traditional search and rescue to maritime security and drug interdiction, there is no other dedicated or capable force as the U.S. Coast Guard. As we move forward with the Congressional budget process, I will continue to closely monitor the Service’s funding support to ensure these vital missions are not infringed.”

As reported by various media outlets earlier in March, President Trump’s budget proposal was anticipated to include up to $1.3 billion in cuts to the Coast Guard and its operations. Potential impact to Air Station Atlantic City and the Coast Guard Training Center in Cape May were not known at that time.

Upon learning of the proposed cuts, LoBiondo immediately rallied with his colleagues in opposition and met with Members of the House Appropriations Committee which is charged with deciding funding levels for federal agencies.

Climate change and ocean research would suffer sharp cuts in the Trump budget proposal for the Commerce Department, which aims for a reduction of 16 percent, or $1.5 billion, much of that targeted at the National Oceanic and Atmospheric Administration.

The Commerce cuts would eliminate $ 250 million in coastal research programs that prepare communities for rising seas and worsening storms, including the popular $73 million Sea Grant program, which works with universities in 33 states.

The Trump budget document asserts that these programs "primarily benefit industry and State and local stakeholders," making them a "lower priority."

But scientists, including a former NOAA administrator, Jane Lubchenco, strongly criticized the proposed cuts when they were reported on previously, saying that they would harm coastal readiness in the face of rising seas and damage states that rely on these funds to manage their shorelines.

"The federal dollars leverage a lot of additional financial resources," Lubchenco said in an earlier interview. She said that cutting Sea Grant funding would "hurt states big-time." Many of the affected states went for Trump in the 2016 election.

The Trump budget proposal does not specify the extent of cuts to NOAA's satellite programs, but those also appear likely to be substantial, based on a prior, more detailed document obtained by The Washington Post. The budget would cut some funding to the Polar Follow On satellite program, a planned launch of two polar-orbiting satellites in 2024 and 2026.

Beyond NOAA, the Commerce cuts would eliminate the Economic Development Administration, a $221 million program that makes local investments to stimulate economic growth, and the Minority Business Development Agency.

The budget would zero out the National Institute of Standards and Technology's $124 million Manufacturing Extension Partnership program, which is intended to support the manufacturing industry. But it would increase funding for the Bureau of the Census as it prepares for the 2020 Census.

(He was poaching from our waters ... and I think I know where.)

Woolwich, Maine - A 70-year-old Woolwich man has been indicted by a federal grand jury alleging that he trafficked in poached elvers — juvenile American eels — between 2011 and 2014.

William Sheldon, a longtime commercial elver dealer operating as Kennebec Glass Eels, is charged with conspiracy and violating the federal Lacey Act, which prohibits interstate transport or transactions of any species of fish or wildlife illegally harvested or handled in any state.

Each of the seven counts carries a maximum sentence of five years in prison and a $250,000 fine.

Sheldon will plead not guilty to the charges, his attorney, Walter McKee, said Tuesday. He is scheduled for arraignment on March 30 in U.S. District Court in Portland.

Prosecutors say that from 2011 to 2014, while Sheldon was licensed in Maine and South Carolina to commercially harvest elvers, he violated the Lacey Act by buying or selling eels illegally poached in Massachusetts, North Carolina, New Jersey, Delaware, Virginia and North Carolina.

According to the indictment, during that time, only Maine, South Carolina and Florida allowed commercial harvest of elvers, the tiny, juvenile American eels that are exported to Asia — and that at the time fetched a per-pound price of $1,500.

Investigators say Sheldon conspired with at least five other people to traffic the eels and submit false documentation about the transactions.

On May 1, 2014, law enforcement agents with the U.S. Fish and Wildlife Service, the National Oceanic and Atmospheric Administration and the Maine Marine Patrol executed a search warrant at Jasper’s Motel in Ellsworth, and searched two rooms rented by Sheldon.

In an affidavit filed in federal court, agents said Sheldon encouraged fishermen, some of whom were undercover federal agents, to fish in prohibited areas and and that he bought elvers that he knew had not been legally harvested.

In addition to the potential sentence, prosecutors are asking that Sheldon be required to forfeit his 2012 Ford F450 truck, which carries the Maine license plate “EELWGN.”

The Maine Marine Patrol and the Department of Marine Resources are investigating whether the charges will affect Sheldon’s elver licenses.

The removal of 55 derelict crab pots has lessened the threat to Maryland's state reptile.

The removal of ghost pots, which can trap and kill diamondback terrapins, was announced by the Maryland Coastal Bays Program.

These pots were removed from Manklin Creek, along with other spots surrounding Assateague Island.

In the coastal bays, ghost pots are often the result of inattentive boaters hitting the floats marking the pots' locations. Once this tie is severed, watermen are unable to find their pots, making them an environmental hazard. In June, one of these pots resulted in the death of 20 terrapins that became trapped in the pot.

"Terrapins are attracted to the same type of food source as blue crabs," said Sandi Smith of the Coastal Bays Program. "Once a turtle gets into the pot, it is unable to get out. As terrapins are air breathers, once trapped, they eventually drown”.

No terrapins were found in any of the recovered pots. However, Coastal Bays Program noted that dead terrapins decay relatively quickly.

All recreational crabbers are required by law to use a turtle exclusion device in all crab pots. The Coastal Bays Program urges citizens to contact Natural Resources Police with information on derelict pots.

The population of the indigenous northern diamondback terrapins are considered "apparently secure" in Maryland and Virginia by the National Aquarium.

A partnership between the the Coastal Bays Program, local watermen and the Assateague Conservation Corps, the ghost pots project plays a part in the Department of Natural Resources' plan. In 2012, Natural Resources launched an initiative, in collaboration with NOAA, establishing a program to study and retrieve Chesapeake Bay ghost crab pots.