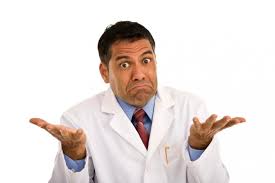 I see the daily papers running with the headline: “Powerful Nor’easter heading for the Shore.”

It sells papers but I’ll re-repeat, that’s not happening … in the classical sense.

What we’ll most likely have is a rather rare – and powerful – nor’wester. Dominate winds should be mainly northwest to north-northwest, meaning slightly offshore. What could become 10-to 12 foot short- to medium-period windswell waves will be feathering – showing wave-top spray, hallmarks of offshore winds.

Northwest winds instead of northeast … what difference does a variance of maybe 30 compass degrees mean for LBI? A ton, floodwise.

Northwest or even straight north winds blow parallel to our bayline. No, I don’t mean shoreline in this potential-flooding instance. Side-ass northwest storm wind simultaneously fill the bay -- and empty it, through a process called evacuation. No, there’s no evacuation! Calm the hell down.

The evacuation of which I technically speak is a process whereby the force of the storm/wind pushes ocean water into the north part of Barnegat Bay (including through Barnegat Inlet), then drives it southward and fairly rapidly out Little Egg Inlet – that outward push is the evacuation.

It’s well known that a northeast (nor-east) to east wind blows in storm-elevated ocean waters -- and then can hold them in place, bayside, allowing a stacking effect, as more water arrives with each high tide. That’s a flooder, if ever. Repeating myself: The arriving storm will not be a nor-easter. That really does matter, flood-wise. Oh, we’re going to see some bay water risings -- but nothing remotely as bad as it might be if NE onshore winds were in play.

WORST FLOODING: It is noteworthy that Beach Haven – and adjacent sedge islands – can act as a bit of a pinch-point for south-blown Barnegat Bay waters. That can lead to nasty localized flooding, especially in the areas of Morrisons, Ketch, Boathouse, Polly’s Dock and the Maritime Museum. Hard-driven north-to-south bay water can also heavily impact some backbay mainland areas, flooding the ends of the assorted Dock roads.

It definitely won't be this bad: 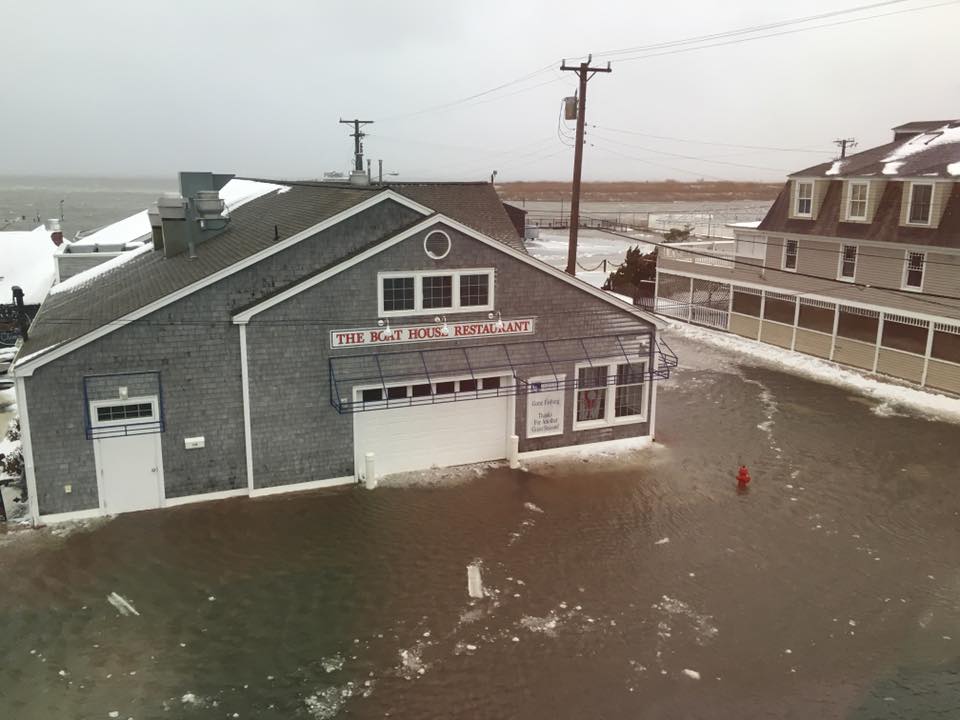 All that said, I’ll obligatorily offer what is now a mantra for me: there’s no longer a set precedent for what might evolve during any big-ass storm. Changing ocean conditions – both temperature and, to an unestablished degree, water chemistry – have tilted the playing field in favor of the storms. If I didn’t live at the epicenter of a dynamic floodplain, I’d find the new coastal weather fascinating. Now, it’s just an ass pain.

“HEADS UP!”: Crash-down warnings for mainland folks in big-tree communities. The rough winter has weakened many a branch. With forecasted 55 mph wind gusts -- which we had out of the west twice this winter – winter-weary branches could give up the ghost. Look out below, vehicle-wise. If you have an unfilled garage, use it; or move vehicles to locations with less chance of impacts from what’s known in the firewood-cutting realm as blow-down … trees and branches biting the dust/ground.

Per usual, I’ll be watching the storm from here on the Island. For me, the most interesting impact zone will be the just-replenished front beaches of Holgate. Oh, there will be cliffs … as sand is eaten away and gets power-driven onto the refuge-adjacent beaches (thank you very much).

As to coming and going on LBI, it would seem that Friday night into Saturday morning could be tricky drive, primarily in all the usual flood places along the Boulevard – along with Central and Barnegat avenues, mid-Island.

Motorist alert: As we all know, all too well, there is some aggravating road/sewer work being done on Central and 9th Street (incoming Causeway) in Ship Bottom. I have to think that excavation area could add craziness to that always flood-prone zone. If nothing else, closed lanes will continue to restrict southbound traffic using Central Avenue and 9th, through Ship Bottom. If possible, steer clear by using Barnegat Avenue if at all logistically possible – though Barnegat Avenue around the school has been getting more and more floody in recent years.

Beachfill on Southern LBI Should Be Complete By End of March

Beachfill work and all demobilization are now expected to conclude by the end of March in Holgate and Beach Haven. Contractor Great Lakes Dredge and Dock Co. originally anticipated wrapping up mid-month, but, as N.J. Department of Environmental Protection Press Officer Lawrence Hajna explained, “weather has pushed things back a bit.”

The $18.4 million contract awarded to Great Lakes involves clearing shoals from Little Egg Inlet, a major thoroughfare for boat traffic between southern Long Beach Island and Brigantine, and replenishing some of the Island’s beaches with the sand.

Great Lake’s hydraulic dredge Texas began replenishment work Jan. 18 in Beach Haven, pumping sand removed from the inlet onto the ocean beaches on LBI’s south end. Earlier this week, operations were near the border of the Edwin B. Forsythe National Wildlife Refuge in Holgate.

“This project is designed to have the multiple benefits of restoring beaches that are economically vital for shore tourism and storm protection while making it safe for boaters to again use Little Egg Inlet,” stated David Rosenblatt, DEP assistant commissioner for engineering and construction. “We look forward to having the project completed in time for the next tourism and boating season.”

The removal of sand from the inlet clears a navigable boat channel 1 mile long and 24 feet below mean sea level “to accommodate the numerous commercial and recreational fishing vessels, private boats and other craft that use the inlet to access Barnegat Bay, Great Bay and the Intracoastal Waterway,” the DEP noted.

Once the contract work and demobilization are complete, Beach Haven and Holgate will reinstall dune fencing, crossovers and dune grass. —J.K.-H.

Operations Scheduled to Commence in March

According to U.S. Army Corps of Engineers Public Affairs Officer Steve Rochette, the R.S. Weeks pipeline dredge would be stationed in Harvey Cedars to commence work in that municipality. Operations would then transition to Surf City. Scheduled completion for beachfill in the two towns is the end of May.

Meanwhile, work in the Brant Beach section of Long Beach Township – from 31st to 57th Street – is also expected to begin in March, with the Magdalenhopper dredge, and to last approximately 30 days.

Cranford-based Weeks Marine was the low bidder for the Long Beach Island replenishment, a $34 million base bid and $40 million for base plus contract options.

In November 2016, another contractor, Great Lakes Dredge and Dock Co., concluded initial construction of LBI’s dune and berm system. The entire project area then became eligible for the Flood Control and Coastal Emergencies program funds. As Rochette has explained previously, “After a significant storm event, we conduct a damage assessment and determine whether the project is eligible based on certain criteria. This program is national and funds repairs to projects across the country, so if the project has been approved and if there’s adequate funding available, we would move forward to repair the project or portions of the project.”

Following storms in October 2015 and January 2016, Harvey Cedars, Surf City and a stretch of Brant Beach were deemed eligible for replenishment; however, there was not adequate funding in the Flood Control and Coastal Emergencies program at the time. The rehabilitation project, though, was later allotted appropriations through this program, provided by Congress through Public Law 114-254 (Further Continuing and Security Assistance Appropriations Act 2017).

While those areas will see replenishment soon, the entirety of the project area will continue to be surveyed on a routine basis, in addition to undergoing evaluation following any significant storm events.  —J.K.-H.

Though we had expected the fluke and seabass regulations to be set at the New Jersey Marine Fisheries Council (NJMFC) meeting on 3/15/18, the setting of regulations for these two species has now been delayed until a special meeting can be scheduled in April. This is a result of decisions made at the recent Atlantic States Marine Fisheries Commission (ASMFC) meeting regarding Addendum XXX for seabass. Several positive changes in the way seabass are managed were made at that meeting. One in particular is a smoothing over approach that can be used to adjust MRIP numbers that appear to be way out of line. For example, the MRIP numbers for Wave 3 (May-June) in 2017 showed that New Jersey harvested an extraordinarily high number of seabass. We will now be able to smooth over that number based on what was harvested during that period in prior years. This is a good thing as it may very well result in us being able to liberalize our regulations this year. Our Bureau of Marine Fisheries has worked diligently on this issue but must have their methodology approved by the ASMFC management board that is not scheduled to meet until 3/20/18. Therefore, the NJMFC cannot set regulations until sometime after this meeting. Further, our council is seeking to close or eliminate the gap from when fluke season closes until when seabass season opens so they have elected to wait until the special meeting in April to set the regulations for both species.

However, the regulations for blackfish and porgies are still expected to be set at the council meeting on 3/15/18. Regarding blackfish, we are mandated to take a 2% cut. The regulations for April will almost certainly remain the same but it looks like the one fish season will begin on 8/1 rather than 7/16 and our bag limit will be reduced from 6 fish to 5 fish from 11/16-12/31. Various other options will be available at this meeting. As with the other species, the options will be shown, comments taken and then the council will make their decision. There is better news on porgies as we will be allowed to increase our harvest by 59%. This will allow New Jersey to have a year-round season. Previously our season was closed from March 1st to June 30th. The bag and size limits will remain the same, 50 fish at 9”.

The NJMFC meeting will be held at 5PM on Thursday 3/15/18 at the Stafford Township Municipal Building located at 260 East Bay Av. in Manahawkin. The public is encouraged to attend and give their opinion on any of the proposals. JCAA will keep you posted as to specific options as they become available via our newsletter and on our Facebook page.

Just for your beachcombing FYI.
These odd-looking,Vulcan warship-ish things that wash ashore with every storm are actually the tenacious seed pods of the highly invasive European water chestnut, an aquatic plant that is high on the “must kill” list of invasive species. It gets into shallow water and chokes out all other indigenous vegetation. When washed into the ocean, they fall into the fairly appealing category of collectible “sea beans.” (Now you can act all smart when the kids find these on the beach.)