I realize that two days in succession doesn’t mean we’re on a full roll but looking ahead we’re rolling toward a bunch more tacking on. Also, the winds will stay fairly tame when factoring in harder west winds. Those offshores are more forgiving nearshore, though they spur the ocean into the bronco mode by the time you’re a couple miles out.

I'll be doing a daily conference call with the National Weather Service tomorrow morning. Along with expected marine conditions, they'll be finalizing the long-weekend forecast. I'll pass on any last-minute stuff, though you already know my lookin'-good thinking. OK, so maybe we'll see a spotty shower or two; absolutely nothing long-term.

Despite the utterly insane number of beachgoers soon to storm the beaches, early a.m. and, to a lesser degree, late-day surfcasting sessions should be highly doable. Think fluke – and rig for same. By the by, where jetties used to mark fishing areas, beach replenishment has created some long un-rocked stretches. I bring that up to warn that late/early-day swimmers can be current-carried along the beachline. You need to NICELY let them know if you have baited lines out.

Once-called garbagefish will rule the hookup roost for many days to come. Dogfish are running wild. Skate are so plentiful you have to reel in any baited lines that keeps going slack for no apparent reason. A hooked skate will lie there doing next to nothing until the cows come home.

The ocean is in the upper 60s, which the Weather Service sees as unusually warm. Spot-on, by my thinking.

PLAY NICE: While most folks in my age group tend to get grumpier as the years poke at our eyes, ears and elsewhere, I’ve actually become a bit more inclined to be kinder and gentler, even fostering peace out there. This time of year, I encourage peacefulness in parking, a very common beach-block flashpoint. I should know.

In the not-so-distant past, I’d routinely get into comically-severe screaming matches over where I can and can’t park. Those roadway roes most often broke out when I tried to find a parking spot to go play volleyball, though some doozies exploded as I parked for work or to fish.

The antagonists are indubitably folks -- some homeowner but more often renters -- who believe the entire frontage of their homes is their personal “driveway.” The laws clearly disagree. One driveway per home. The rest of the frontage is parkable public road space. That “public” looms large, since taxes pay for the roads.

I confidently know my parking rights on LBI, which means I park legally, every single time.

But back to the more peaceable me.

I no longer resort to screaming back upon hearing, “You can’t park there!” At most, I now simply waggle a better-not-go-there forefinger at the yeller, foregoing any other fingers. It often works. However, should I then hear ye typical, “I’m calling the police!” the magic of cellphones emerges. “No, I’ll call them for you,” I generously offer, adding, with savoir faire, “I have them right here on speed-dial.”

Just that cellphone posturing often shuts down folks, especially those who know they haven’t got a parking claim to stand on. Many of them actually don’t want the very cops they threatened to call. And for good reason. If the local PD has been called to the address in the past – advising the owners they have no right to confront parkers – there’s no more Mr. Nicecop. Charges of disorderly conduct are possible.

I know of one case where a male property owner got so aggressive over a contested ocean-block parking spot, he “terrified” a beachgoing family’s kids. The dad filed charges, including “damages” for a “ruined vacation.” I was hot to write-up that story but it was settled out of court – with the aggressive homeowner apparently paying up. Out-of-court settlements aren’t public domain so I never heard any amounts. I do know the house went up for sale that winter.

OK, so maybe I’m not sounding very Gandhi-ish here but here’s hoping calmness prevails. Should clueless or callous homeowners verbally attack as you park, walk it off, i.e. just mosey on off to the beach. If cops truly need to be brought in, it’s well worth hanging around to legally sort things out. The option is having the entire day ruined as you lie on the beach fretting over whether or not you might get ticketed.

I’d like to think my keep-it-nice advice might also apply to property owners but I’ve been immersed in the parking wars long enough to know those tigers aren’t changing their grouchy stripes … until maybe they get sued.

Fluke fishing in the Beach Haven area has been proving productive for the captains of the Beach Haven Charter Fishing Association while offshore fishing has also been attractive.
Captain Dan Skrzat of the “Get Reel” fished a couple of days recently in 67-degree water in the ocean at the Twenty Line. He released one brown shark and kept a strong 120-pound mako shark. A third day he had the crew from Jerry's Diesel in West Creek out fishing the Twenty Line again, this time for tuna. Captain Dan quickly located bait and tuna. He got his “three under” bluefins and released a white marlin. He is pleased to see those fish in close. Later in the day he tried a little sharking but could not raise any.
Captain Jimmy Zavacky helped a young family with four youngsters celebrate the end of the school year with a bay fishing trip. The group managed a keeper weakfish and boated some medium sized bluefish on the troll. Mate Liane Lopez reported the children were fascinated with all of the living creatures, even the live minnows which they played with all day. It was a fish and fun day for the whole family. Another day the McGee crew tried a little reef fishing and managed some huge sea bass which had to be released until they come back in season.
Captain Fran Verdi has been finding some nice fluke fishing the inshore artificial reefs and some of his wreck spots. He had a group of Junior Mates out to catch some fish and learn the basics of proper fishing.
Additional Information on the Beach Haven Charter Fishing Association can be found at www.BHCFA.net.

Fish Monger II Wed 6/29 Day two for the Rutgers research team... 6 different drops in a different area for today's studies... all w the same results... every spot loaded with seabass n also some hungry tog. Plenty to sample from for their project and again glad to b a part of getting the data they are looking for. One thing i learned thats been impressive is the amount seabass on their circle hook dead stick sample rods. Seems the angler swings at the little bite yet the circle hooks only hook bigger fish ... See em again in a month or so. Been fun thanks guys 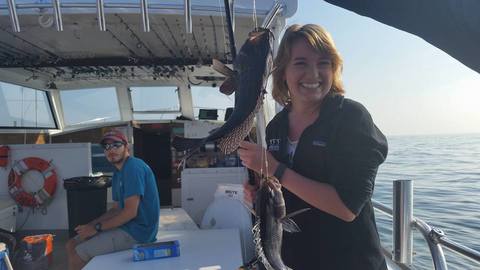 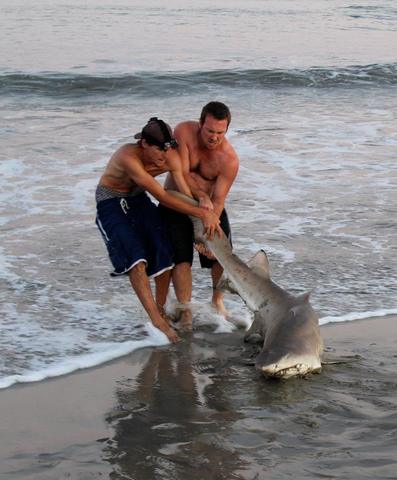 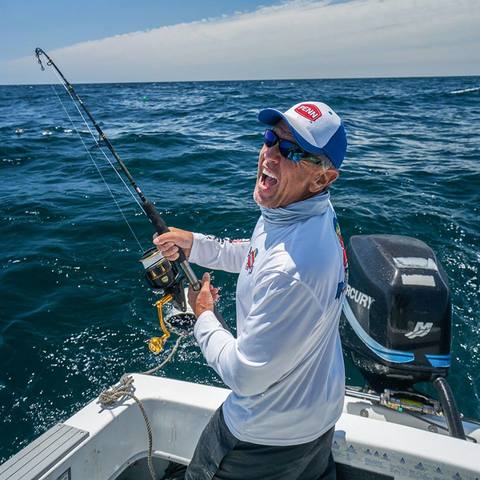 I just got back from a photo shoot with a crew from PENN and The Fisherman magazine. We fished aboard the "Billfish" with long time PENN Pro Staff member Captain
Bill Brown and we went shark fishing to showcase the capabilities of the new PENN Slammer III series spinning reels and rods. The drag system (that can be set up to 60 pounds!) worked flawlessly with silky smooth action, run after run. The new rods were light yet amazingly powerful and up to the job of landing sharks over 275 pounds. The reels also feature the new IPX6 Sealed System that keeps water out of the gear box no matter how soaked they get from spray while running out to the tuna and shark fishing grounds.