It's the old "dogs begin to look like their owners" syndrome.

Thursday, June 29, 2017: The winds, boss, the winds. You have to admit the southerlies remain ruiners when it comes to comfortable boat or surf fishing, though they’re not all that bad along the Barnegat Inlet south jetty, where it blows toward the backs of anglers. I’d even recommend heading there if you simply must  get in some bright and comfortable angling time. There are even some fish to be had on the jetty: blues, bass and, for savvier jetty anglers, fluke. Flatties are my favorite south jetty targets – blackfish being taboo. The new flood of fluke jigs should work great, though I prefer throwing out of a normal fluke rig with squid/spearing combo and allowing it to drift with the current. If the drifting stops unnaturally, a flattie just might be saluting.

By the weekend, we’ll finally see a few days with a.m. backdowns of winds, prior to harder gusts, late-day.

Make sure to use both local tackle shops and also headboats and charters.

When our waters aren’t being stirred and browned by winds, they’ve been as ideal as it gets, a tribute to ongoing ocean-watch and clean ocean efforts. They pay.

GRAY SUITS: Now to the effects such clean water will have on the men in gray.

I believe ultra-clear water makes it easier to see sharks in the swash while also drawing them in closer – sometimes following in forage driven to the beachline by spooky-high visibility.

Below you’ll see the story about a four-foot hammerhead caught recently by a surfcaster in Cape May. I really like the emphasis on the highly-recognizable shark’s rapid release. That helps efforts to keep shark-fishing in good graces – since we aren’t really swimming in fish to be caught in the surf.

That’s just the tip of the arriving cartilaginous sharkberg.

I’m not big on bitching and moaning about LBI’s jetties lost to replen, however, I used to use them to locate any summer resident stripers along the beach, which always hung near them. Now it’s a crap shoot, which is what fishing is all about --but old habits die hard. Within ten early a.m. casts, I could score (and release) any resident bass per jetty.

(I actually have some interesting info coming in about real-time video cameras atop the Barnegat Lighthouse but have to get some confirmations.)

CAPE MAY POINT- A family fishing and swimming in Cape May Point reeled in a huge surprise over the weekend at the county's famed Sunset Beach.

A video and photos shared on Instagram show an injured hammerhead shark in the water off Alexander Avenue as the fisherman pulled it to shore and later returned it to the waves.

"This young hammerhead had a nice chunk eaten out of him so something out there was biting him," Colleen Marie said in her Instagram post. She had been swimming in the same spot just 10 minutes earlier.

The family took some quick photos of the shark and then released it into the water as the brief second video concludes. A family had a brief encounter with a hammerhead shark in Wildwood over the weekend before releasing it back into the ocean.
(Instagram user: ColleenMarieSchep) 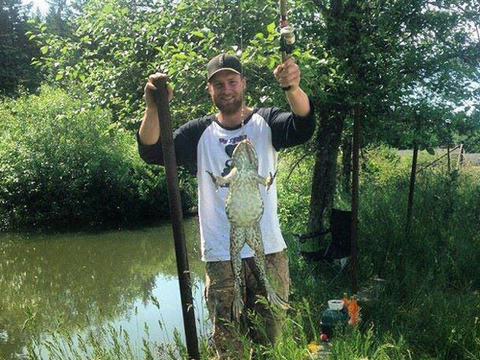 I have herpetology snaking through my veins, having been a crazed collector of amphibians and reptiles for many a way-back decade. Those were the days when one was allowed to legally collect herps in Jersey. Now, the only things you can legally collect along herptile lines are maybe some snapping turtles and a random, thick-legged bullfrog.

I longingly (and often, in here) recall my bullfrogging days, when I’d use a longish freshwater fishing rod and either a tied fly or a small spinning lure to fish mega-bullfrogs by slowly sneaking up to them sunning as the sunned on the banks of everything from lakes to creeks to big puddles. Once behind a sunner, I’d stealthily  dangle a lure. “Frog on!”

This dangle technique never failed. Those always voracious amphibians would savagely attack my danglings, as if they were floating pieces of pizza, using human terms.

During wilder hookups, frogs would launch themselves easily three feet into the air to attack my lure. I can’t recall one ever missing the mark -- though quickly wishing they hadn’t, as the hook set in. Bullfrogs were an easy hook-up.

Since you really must know, once hooked they can put up a decent, albeit weird,  fight -- first in the water, then onto the land and sometimes back into the water again. 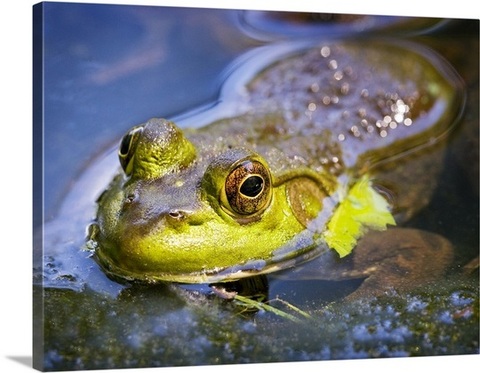 During my frogging days, I took some bloody bullfrog bites when unhooking them. They have some nasty little upper teeth.

I’ll insert here and now, I never kept one, despite having caught dozens and dozens on end. Also, you should reconsider any “poor little froggie” thoughts you harbor. These animals eat anything they can get their grubby mouths around, including their own, along with sundry endangered species. Hell, they make bluefish look like saints.

Per www.seaworld.org, bullfrogs “will eat almost anything that moves and that it can swallow - including invertebrates and small vertebrates such as mammals, birds, reptiles, fish, and even turtles and other frogs.”

These are our largest frogs. I caught a few over one pound in weight. Believe me, that’s a handful. But times have changed. Worrisomely, most of the local once bullfrog waters are now fully devoid of the species. It happened when I got obsessed with surfing and abandoned mainland fishing and frogging. I can only guess “gig-froggers,” hunting them at night with spotlights and quick-kill gig spears, wiped them out. 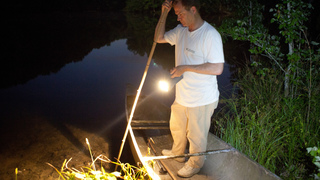 Also, bullfrogs are drawn more to what I call “bass water,” as in largemouth bass. Evenly mildly acidic (Pinelands) waters are not fully to their liking, though they obviously survived decently within, back in the days. Western Burlington County and all Camden County still have monster bullfrogs.

Again, for me, it was strictly hook-and-release -- in a hop, skip and a jump. By the by, only an hour later, the recently hooked-and-released frogs were back sunning on the banks, though impressively wary of a dangled lure this time.

I bring bullfrogs up in reaction to the search for the state reptile (see below). I’m writing on the state-reptile effort for next week’s column. While the bullfrog hasn’t got a chance at becoming the eventual state amphibian -- in the face of the beloved Pine Barrens tree frog – it should get some recognition for such a bad-ass.

The Fourth of July weekend means that the summer fishing season has officially arrived in Beach Haven. The captains of the Beach Haven Charter Fishing Association have been making their mark fishing from the bays to the canyons and are making plans for more productive trips.

Captain Peter Doran fished the Wilmington Canyon on an overnight trip a couple of days ago on the “Mud Duck” and ended up with a good mix of pelagic species. They finished the trip with three nice yellowfin tuna to 50-pounds, mahi, tilefish, and a good-sized mako shark. They also saw several white marlin in the spread and tailing on the surface. Captain Doran feels it won’t be long until they show up in better numbers.

Captain Dave Kreines had the Dahlberg family out for a bay fishing trip on the “Byte Me.” They fished the Intercoastal waterway behind Beach Haven and had a nice pick of fluke, smooth dogfish, and sea robins. The group finished up with two nice keeper fluke and a great time on the water.

With the black sea bass season temporarily closed, it is frustrating to fish structure in the ocean for summer flounder and pull up big sea bass. Captain Carl Sheppard had the Young family out on the “Star Fish” and that was the situation. They did manage to pull in some keeper fluke in 60- feet of water. Mate Marlyn Graham was in constant motion running around the boat unhooking fish.

Captain Jimmy Zavacky had a father and son charter out on the “Reel Determined” recently, and they caught “tons” of large sea bass, but all were released with the season closed. Captain Jimmy announced the BHCFA Junior Mates had their first class with 12 eager junior mates in attendance and more expected at the next session.

Captain Ray Lopez had no trips slated last weekend but announced he has open dates coming up and is eager to put some anglers on the fish.

Captain John Lewis has just returned from Florida with his last boat delivery of the spring season. He is anxious to get the “Insatiable” out on the tuna grounds as he has gotten some excellent reports of bluefin, yellowfin, and bigeye already hitting the docks along with quite a few large makos.

Additional Information on the Beach Haven Charter Fishing Association can be found at www.BHCFA.net. 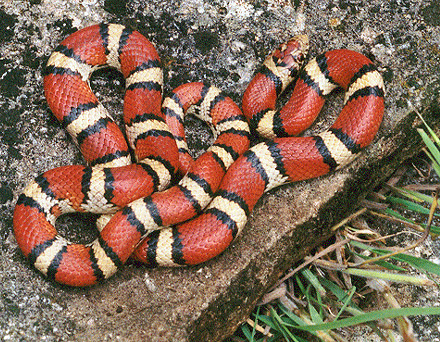 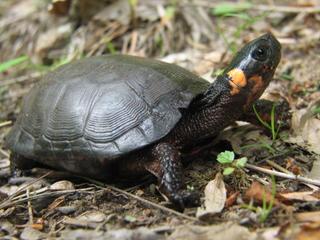 TRENTON -- It would make your blood run cold to see how Trenton politicians were fighting over you...if you weren't already cold-blooded.

On Monday, Politico's Matt Friedman fired off the tweet that said it all.

Dutifully, Muoio introduced legislation to give the kissing, but non-venomous, cousin of the Northern Copperhead the bragging rights.

But unbeknownst to Muoio, Assemblyman Andrew Zwicker (D-Somerset) and state Sen. Christopher 'Kip' Bateman (R-Somerset) had simultaneously gotten a similar request from a group of elementary school students in their district-- albeit with their demand that the Bog Turtle be given the glory.

Zwicker, too, promptly dropped a bill in favor of the critically endangered ectotherm.

Thus begat a reptilian showdown certain to bitterly divide both the Legislature and the electorate, as NJ Advance Media's video investigation (above) showed on Monday.

Where do you stand? Are you on #TeamEasternMilkSnake? Or have you joined #TeamBogTurtle? Come out of your shell and let us know in the comments section below -- just don't speak with a forked tongue.

2-3 fish over 40 lbs this year and about a dozen in the 30 class. Color really didn't seem to matter as i caught on 7 different colors. Didn't get may pIcs as i was alone a lot but here is a few. It's now TUNA TIME if any of my friends want to get out let me know i have 3 full trips booked and will do some open boat trips. Blue fin trips, meat yellowfin trips and Bigeye trips.. They said "Try a vegan diet. You'll never get fat on that." 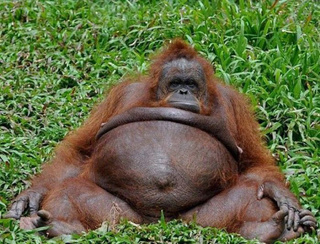