Thursday, June 18, 2015: (Forbearance: I now-and-again throw in my humble request that, when reading my blogs, you go with the typo flow. Yes, I’m an editor but I simply don’t have the time to re-read my “daily” stuff -- and still get all my other work responsibilities done. However, if you see a mistake that is grievously wrong let me know. I once typo-ed that a sex offender “might beat the courts but he’ll never sway pubic opinion.” The pubic was both offended and doubled over laughing. )

The ocean is well riled today. There was also enough rain to mildly impact the west side of the bay, via runoff. The problem could be the long period without a harder rain, meaning a load of highway sludge and (yes, still) yard fertilizer will enter the bay’s chemical load. We’ll know that eco-damage when it heats up and any algae overload shows.  (See “Save the Bay” below.)

I had two folks asking for any updates on fluking, seeing they’re coming down later today for a long weekend. I’m clueless. I got a couple reports of really slow fluking, south end. Not even shorts in those two cases. At the same time, there is that occasional FB pic of a doormat. That is not only the nature of fishing but doubly so with flatties, a fishery that can run hot-and-cold at the drop of cushion sinker.

TBT BELOW: My college days on Maui:

My campus in Upper Paia, with the lower slopes of Haleakala in the background. 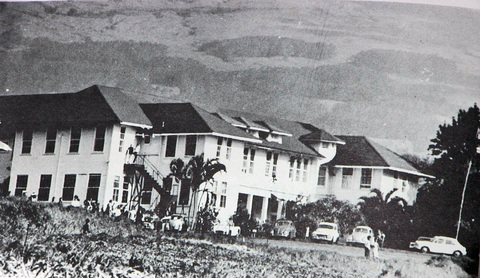 I took my college responsibilities quite seriously: I also seldom strayed from my studies ... 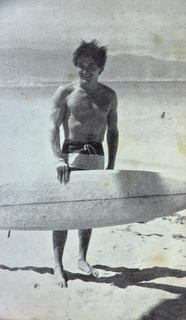 SHARK MATTERS NEVER SLEEP: I’d actually like to steal away from the shark thing but I just got sent some bizarre photos of large, dangerous-species sharks washing up dead, apparently in Jersey. I don’t know where the photos are even from, state-wise, but large dead sharks seldom wash up hereabouts. Dogfish, on the other hand.

I’m waiting for some of our talented surfcasting shark fishermen to show me what gray suits are in the surfline. Many of you might recall that folks doing after-dark fishing last summer went shark crazy. While there are strict laws about fishing for sharks, if they hook themselves there’s no alternative but reel them in – you know, just to nicely release them.

It could get interesting when the spearfishing crew works the jetties. If anyone is going to see silent swimmers it’ll be them, though our more common sharks, like browns and duskys are more night oriented. My beloved bull sharks are very much high-sun predators.

Here’s the most infamous video of a bull shark in action … somewhere up a brackish river near north Myrtle Beach, SC.  That’s a small red drum that is being inhaled. http://www.youtube.com/watch?v=ZcuYjDR2tSg

Here’s a follow-up video with the gal in the vid:   http://www.youtube.com/watch?v=lONZyWRb1J8

The one thing this insane video shows is the speed of a shark attack. You show  me at what point you would adroitly punch this shark in the nose, as is prescribed in, “What to do if attacked by a shark.”

The theme this week for the boats of the Beach Haven Charter Fishing Association is variety. The captains are scoring and getting excited about the fishing in the bay, in the ocean not too far from the inlet, and offshore.

Captain Fran Verdi on the “Francesca Marie” made his first offshore trip of the year Sunday to the Wilmington Canyon. He arrived at 5am and had lines in the water 15 minutes later. He worked the East wall, the Tip, and the West Wall for about 4 hours with not even a touch. He made the decision to troll north looking in the flats and had the first bite of the day which turned into a nice 30-pound yellowfin tuna. He then trolled the 40 and 50 line where he found one more tuna in the 30-pound class. They then headed in and ended the day with a 40-pounder.

Another day Captain Fran fished wrecks in 80-feet of water and had steady action on black sea bass, blackfish, and ling. He moved to a wreck in 65-feet of water but most of the fish were out of season blackfish and short sea bass. He returned to deeper water and better action. The “Francesca Marie” ended the day with 22 sea bass and 4 big ling in the cooler. He estimates they threw back another 40 sea bass and all of the blackfish.

Captain George Finck had a crew out on the “Sparetime” fishing the reef. They had good action but all were shorts. He moved into the bay where they had a nice catch of bluefish. The next day he had the Rotelle family out to the reef with great weather and good action on fluke and sea bass. The boys were out fished by the female anglers, and the family went home with dinner.

Captain Carl Sheppard ran the “Star Fish” on three trips over the weekend just past, and all three had good catches of over 60 fish. Captain Carl found black bass on many of the wrecks in good numbers, but keepers were harder to find. The number of keepers per fish caught has dropped to about 1 in 10. The southern locations were once again better than the northern spots.

Meanwhile, Captain Gary Dugan of Irish Jig Sportfishing reports fishing in the waters of Great Bay with loads of action on the fluke along with some very nice fish ending up in the box.

Additional information on the captains and boats of the Beach Haven Charter Fishing Association can be found at www.bhcfa.net

Some more tagging info from this spring. This one was a U.S. Fish&Wildlife / DE Dept.of Nat.Resources & Environmental Control tagged striped bass I caught last month and I just received the info back on it. Originally tagged on 4/25/11 Location: Delaware River near Wilmington DE SIZE: 40.9" YEAR CLASS: 1992. At the time I caught it this past month along the NJ coast it measure 43" and released back after the pleasure of catching and watching it swim off. “I accept the Challenge not to allow lawn fertilizers in my yard so that Barnegat Bay can be restored to health.”