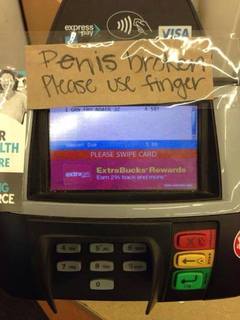 Thursday, June 11, 2015: Winds continue to pester and aggravate. We should see some west winds, which help surfcasting, but even those offshores could get gusty, pissing off boat anglers. Then the weekend will be a tri-imperfecta. We’ll see winds go from hard offshore to hard north to brisk east and then swing back around from the gusty south all -- within 48 hours. I stand by my theory that the only way to really get in any fishing is to rush out if it looks doable – and be alert to things going snotty, sometimes very quickly.

Fishing pressure is definitely down, both surf and boat. That makes sense. We’re in that ‘tweener zone. Many schools are still in session which means the family switch down to the beach is not yet in full swing. Also, savvy anglers are looking out, considering taking a “sick” day but there just haven’t been that many sweet looking hooky days to be had. In fact, now many workaday anglers are opting for an extra-long July 4th weekend.

Minutia: The espression “hooky” while it sounds very much like a fishing excuse for playing hooky from school actually not of an angling ilk. Boringly, it likely comes from the Dutch term hoekje spelen, meaning 'hide-and-seek'.

While hooky is first noted in 1848, it was later made famous, as were many expressions, thanks to Mark Twain. "He moped to school gloomy and sad, and took his flogging, along with Joe Harper, for playing hookey the day before." Twain wrote in “Tom Sawyer.” 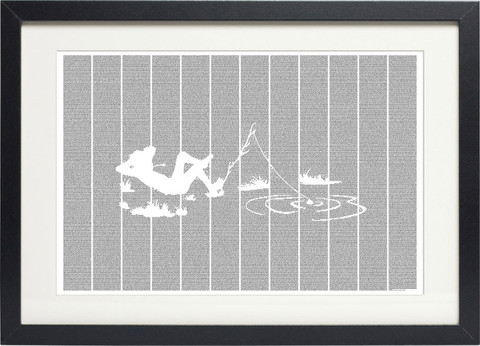 Make sure to check out our buddy Hutch Jr. at

All this talk about Mary Lee in recent months, now it's time to focus on real sharkin' with the makos and threshers. A monster thresher caught at the DB Buoy earlier this week and weighed in (509-1/2 pounds) at Lewes Harbour Marina should get sharkers excited about the tournament weekend!

For those who paddleboard in alligator waters ... 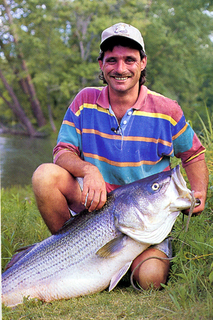 As for bassing, the fish are likely there but the wind/waves/weather won’t allow a proper read. I relate to those who just can’t get motivated for roughing it in pursuit of spring stripers. Come fall, I’ll wetsuit up, jump waves and chew windblown sand chasing bass. Spring?  Let me know if they’re jumping out of the water. Which allows me to give a hearty thumb’s up to those tenacious folks now managing to nab some good spring bass.

Below, see a fine 34.5-pound cod taken by Bill Browne. Looks like fun. I’ve never taken on cod. Closest I’ve ever gotten was an occasional hake. Not quite the same.

BETTER MAKE THAT THREE MILES: I had written that Holgate added a couple extra miles to the famed 18-mile LBI. I knew Holgate was two miles and change, based on my odometer, but didn’t want to rock the 18 Miles at Sea boat too much past those two miles. But, lo, I got scientifically one-upped. Turns out it is now officially three miles, via the Forsythe refuge’s measuring posts; they go to 16,000 feet – before bending further west and around back, to 17,000 feet. Those 16,000 feet translates into 3.03 miles. Wow.  Also, the south end continues to build southward – additionally, there’s that distance from the entrance to the Holgate parking lot over to the official start of the Forsythe property. That distance is above and beyond the famed 18 miles.

The Dot is commencing with remediation work on the Forsythe-owned portion of Bonnet Island, south of Rte. 72. A large section of it was cleared and red fenced quite a while back, being readied for the creation of a maritime forest environment -- replete with educational trials and birdwatching areas. I fretted that the clearing work might disrupt nesting birds and terrapins.  Soon after, the clearcutting ceased, hopefully with wildlife in mind.

The new phase of construction on Bonnet Island will be the building of a parking area and needed revetments. I’m hoping this work will be mainly adjacent to the highway. Should the work impinge of the refuge, a look-see should be done regarding any nests currently in the cleared areas.

I’ve been repeatedly asked when the bird lookouts will be opened. I have to think they will open as part of the grand opening of the new bridges, circa 2017.

You have to see the great pics and videos of the bridge work. The images were taken by The SandPaper photog Ryan Morrill. His drone shots show the now seemingly highly accelerated progress on the new Causeway. 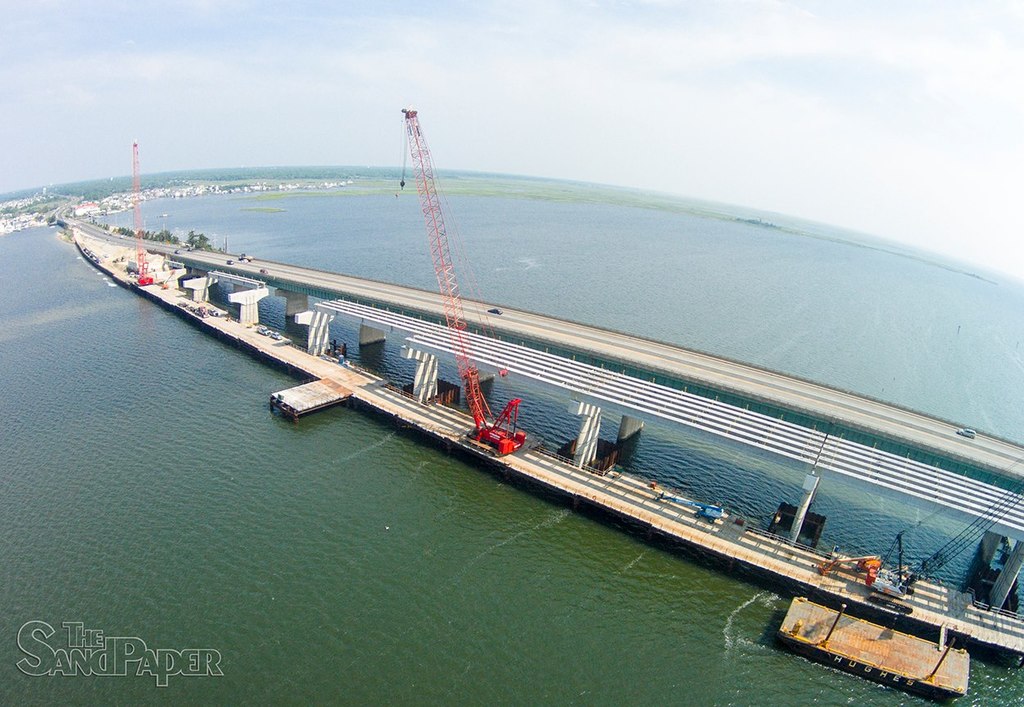 The Mid-Atlantic Fishery Management Council voted Wednesday to protect deep sea corals from most bottom fishing over about 38,000 square miles of ocean, running from New York to Virginia.

The corals form fragile ecosystems hundreds of yards underwater that support a variety of fish. And bottom trawling, mostly by the squid fishery, posed a threat, according to scientists and conservation organizations that have lobbied in recent years to protect the corals, which are slow-growing and long-lived, and therefore do not recover easily from damage.

The squid industry, which initially objected to many of the restrictions, worked with scientists and conservationists to establish boundaries for 15 discrete deepwater canyons and other sites where bottom fishing would be prohibited. And in the end, said Gregory P. DiDomenico, the executive director of the Garden State Seafood Association, he supported the broader area that overlaps most of the canyons.

Mr. DiDomenico, whose group represents the New Jersey squid fishery, said the change would protect ''the most valuable and unique habitats in the region,'' although he objected to the push for an even larger area by environmentalists. Brad Sewell, the fisheries policy director at the Natural Resources Defense Council, which lobbied for the change along with groups like Oceana and the Pew Charitable Trust, said the vote ''marks a milestone in ocean-protection efforts.''

Fishing regulations are labyrinthine, combining federal and state rules. The fishery council does not have jurisdiction over lobster fishing, and it also voted to exempt red-crab fishing from the regulations for at least two years. Protections do not extend to oil and gas drilling, or the laying of cables or other underwater activities. Those are all regulated by different agencies. Although other rules may apply for those activities, the council has no say in matters other than fishing. In January, President Obama proposed opening an area of the Atlantic to drilling that overlaps the southern part of the protected area.

In recent years, submersible dives have revealed much about the ecosystems of deep-sea corals. Armed with that information, conservation groups have pushed to stop the kind of trawling that can dislodge or break the corals.

Mr. Sewell said after the vote that fishing regulations offered only some protections and that he hoped that the decision would send a signal to agencies that regulated other activities.

The vote had been postponed until now because of disagreement at a council meeting in February. The industry objected to many of the rules, and a workshop was held in April in which scientists, activists and industry representatives participated.

That workshop produced a compromise on boundaries for the 15 discrete areas, although there was still strong disagreement about the broad zone, which was voted on Wednesday.

Before the meeting, Mr. DiDomenico said the squid fishery supported the effort to save the corals despite disagreements with conservation groups on many issues, and he pointed to his industry's willingness to support many of the restrictions. He said, ''If we stay in business and protect corals, we've done our job.''

Nice way to spend your birthday. Have to love New Jersey Jay Mann Many/most folks like this smoke-free beach concept, especially with kids around. I fought for it. However, I cringe a bit when pondering either lifeguards or beach badge checkers enforcing the law (not likely) or alerting police (probable). There are some/many smokers who are very belligerent. Even after being forced to snuff it, they'll be wise to the fact they were turned in. Tension. I'm still hoping for the smoke-free best.

Cod fishing was just OK today, lots of shorts and some keepers. However,Bill Browne pulled up this 34 1/2 lb jumbo. With Don Marantz and Kyren Dooley

This might be one of the greatest auctions ever held hereabouts. The selection is insane ... from Harleys to Roseville like you've never seen. You gotta check the items going up for bid this Saturday June 13, 2015, 9:00 AM EST.
Eagleswood Fire Hall
219 Railroad Avenue
West Creek, NJ
Dual Estate Auction (154 Lots)...