Thursday, June 09, 2016: Well, the tides went way out, as expected. It offered a chance for savvy surfcasters to see where the slews, troughs and east/west channels are located during higher water times.

The swell is fading fast. Despite the hard westerlies, the water in nearly immaculate. That – and the low tides – means you have to choose your session carefully. Late-day and way-early are best with artificials --- and baits. Daytime fishing is going to be a tough go -- but well worth throwing a chunk or two out with circle hooks in play. Then sit back and enjoy the 10-SPF sunshine. You can even use those face-protection masks you got as gifts. Just don’t scare little kids. For that matter, just think what catch-and-release fish will tell its friends. Terry Nugent
I need to get a bigger sink or learn to catch smaller fish. 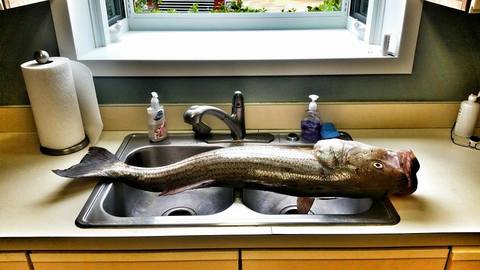 Make sure to check this out::::::: "A documentary following the remaining baymen on the Barnegat Bay in New Jersey & their venture to sustain themselves, the bay and its traditions."

The captains of the Beach Haven Charter Fishing Association have been finding good action on black sea bass on area wrecks and reefs. With that fishery closing shortly, they plan on working the inshore fluke grounds and heading offshore for tuna.

Captain Bill Kaiser had the “Tuna Sue” out recently to the Lemke’s Canyon looking for tuna. He was able to locate some bluefin tuna, but unfortunately there were giant gator bluefish also in the water. The blues tore up a lot of tackle and made it impossible to get down to the bluefin. He ran to the Claw where he found more bluefin but also big blues that made fishing nearly impossible. There were some small mako and blue sharks on top of the water, and his group was able to have some fun with them.

Captain Gary Dugan has been doing some successful wreck fishing on the “Irish Jig.” One day his group picked up some nice sea bass for the cooler along with some blackfish that had to be returned. They moved into the bay for fluke and managed one 18-inch keeper along with some throwbacks. Another day Captain Gary had steady action while wreck fishing Friday with 75-80 fish, but only a few nice fish made the box including a very nice ling. He moved inside and trolled for stripers and had 2 knock downs but nothing hooked up. He has also picked up some bluefish in the bay.

Captain Fran Verdi has been finding some nice life while fishing various wrecks on the “Francesca Marie. He had the John Hufnagle crew out on 5 wrecks in 65-80 feet of water and found action on all of them. The group had over 80 fish that day and was able to put 40 sea bass in the box.  Most of the fish were the 13-15 inch range, but a few were over 17-inces. With the sea bass season closing on June 19, Captain Fran is putting his time in on them. He has heard of striper action to the north, and plans to sail for fluke and tuna when the sea bass ends. 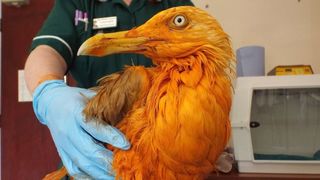 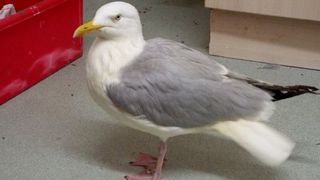 A seagull turned bright orange after falling into a vat of curry.

The bird fell into a container of chicken tikka masala while trying to scavenge a piece of meat from a food factory bin.

He was rescued by workers at the undisclosed site in south east Wales and picked up by a volunteer for Vale Wildlife Hospital near Tewkesbury.

Staff at the centre used washing up liquid to clean the gull's feathers.

They managed to return him back to his original white colour but have not been able to wash away the smell.

Lucy Kells, a veterinary nurse at the hospital in Worcestershire, said: "He really surprised everyone here - we had never seen anything like it before.

"The thing that shocked us the most was the smell. He smelled amazing, he really smelled good."

I went home for a nap,
Paulie Antenucci sent me this about a hour later, the second #30 fish he got that afternoon NEW YORK -- Progress toward conserving endangered Pacific bluefin tuna is not enough to keep up with the pace of fishing, and the industry faces the risk of collapse, said Amanda Nickson, director for Global Tuna Conservation at the Pew Charitable Trusts.

"Pacific bluefin is still being fished at least 20% above the level it would be sustainable, and its population is still severely depleted," she said. "In the future, that population could ultimately collapse and be incapable of supporting a commercial fishery."

Nickson spoke on the sidelines of a United Nations conference held from May 23-27 for the third review of the U.N. Fish Stocks Agreement, which was adopted by the General Assembly in 1995. Signed onto by 83 countries so far, the accord sets out a number of commitments to improving the status of straddling and highly migratory fish stocks, including tuna species like Pacific bluefin.

Despite progress in some areas, notably in efforts to curtail illegal fishing, implementation of other major provisions of the agreement is still falling short. Members at the conference noted that the overall status of straddling and highly migratory fish stocks has not improved since previous reviews in 2006 and 2010.

A report from the U.N. secretary-general to the conference indicated that 84% of straddling fish stocks and 86% of tuna and tuna-like species stocks were either overexploited or fully exploited. Pacific bluefin, fished mainly in the seas around Japan, is of particular concern -- its population having decreased by 97% compared with unfished levels.

According to a new report by the Pew Charitable Trusts, the global tuna industry was valued at an estimated $42.2 billion in 2014, with Indonesia, Japan, and Taiwan constituting the top three tuna-fishing nations. In addition to being the second-largest tuna-fishing country, Japan is also the largest consumer of sashimi, accounting for 75-80% of the global sashimi market. The regional fishery management organizations (RFMOs) found that all three of the bluefin tuna species are currently overfished. These three types of tuna are also the highest-priced, generating over $2 billion in end value annually.

For Japan, the economic significance of Pacific bluefin means much is at stake if the industry is unable to sustain itself. Japan's Fisheries Agency, working with RFMOs, has set a goal of bringing the stock back to the historical average of 43,000 tons by 2024, up from 26,000 tons in 2012. The Fisheries Agency has also announced limits to cap catches of fish under 30kg, including bluefin, at 4,007 tons annually. A number of RFMOs are scheduled to meet later this year to discuss further measures.

While Japan has taken some preliminary steps, Nickson expressed concern that these measures are still not enough.

"At the moment, the only recovery target would return the population to 6.9% of its unfished levels. We'd like to see Japan really take a strong role in defining a management plan that would return that stock to 25% of unfished levels, at least," Nickson said. She also noted that Pacific bluefin is a resilient species, and that with proper limitations, substantial improvement could be seen in as few as five years.

They Released 14 Wolves Into A Park. What Happens Next Is A Miracle And Proves That We Must Take Care Of Our Amazing Planet. In the "It has finally happened" category:

VIRGINIA BEACH, Va. – A woman was killed at Virginia Beach on Wednesday when a wind-blown beach umbrella stabbed her in the chest.

The 56-year-old woman was on the beach when the anchored umbrella blew across the sand and struck her in the chest, officials told WTKR. There is no evidence of foul play.

Police said they received a call for a cardiac arrest on the beach at 33rd Street just after 5 p.m.

When crews arrived, the woman was found suffering from a life threatening injury. She was transported to a local hospital where she later died.

"It was pretty windy down here. It kind of looked like something from the Wizard of Oz. Literally. Saw the umbrella go up in the air, and literally hit the woman, knocking her to the side. Immediately, the lifeguards, and people start rushing around. It was probably the most scariest things I've ever seen," said Hugh Martin, who works on the boardwalk.

Martin says the woman was talking to children when she was struck.