Thursday, June 04, 2015: For today and tomorrow, there is no bright news on the weather front. 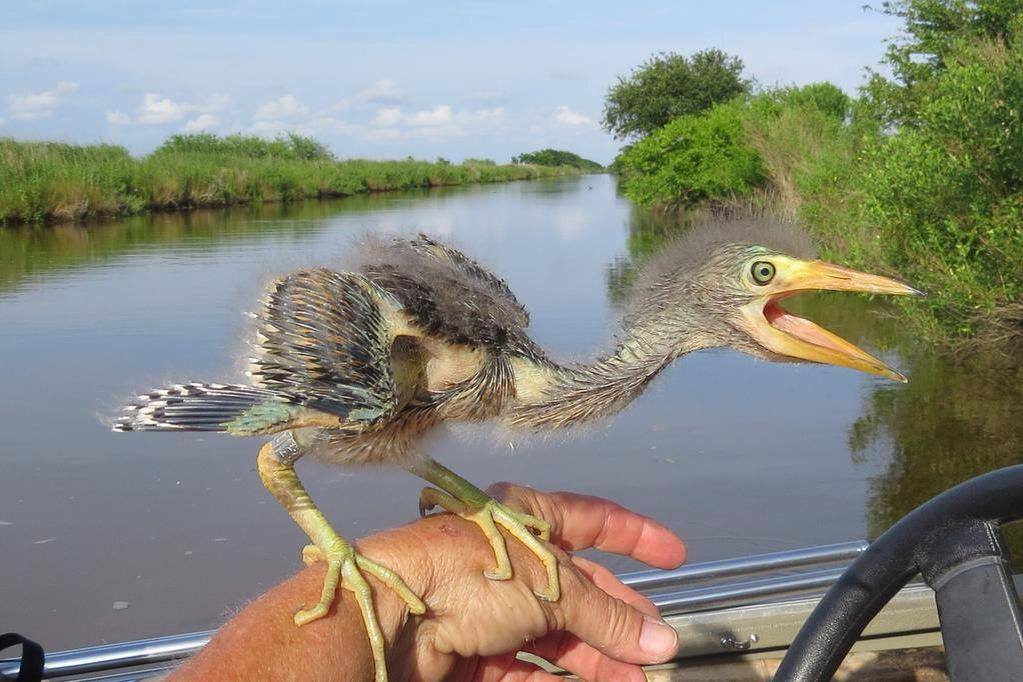 Baby blue heron... Even the parents are pointing to each other going, "Oh, that's definitely your kid, not mine."

Thursday, June 04, 2015: For today and tomorrow, there is no bright news on the weather front. Even with some brighter skies by the weekend, these suddenly dominant north winds won’t soon be backing off. I don’t see comfortable boat – or even beach – angling for days, though there could be a slight wind laydown on Saturday … but picking up again by Sunday. That’s not much to go on but we're in an odd weather pattern.

The water temps have inched out of the 50s … barely. However, water temps are no longer that much of a player. Fish are all on the move, in a migratory vein.

Blowfish:  I have to wonder if the insane showing of blues decimated what had, in recent years, been a decent spring showing of blowfish. A few have been caught. And, and out of those few, almost as many have shown bite marks. Add to that the number of semi-digested blowfish found, as stomach contents, in bluefish, it surely hasn’t been a good annual trip northward for these oddly beloved puffers. Recalling those blowfish population explosions back in the 1960s, there were virtually no bluefish around. There might have been a link there. 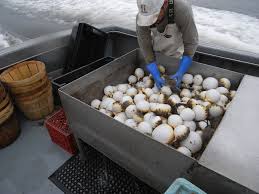 I’ve gotten no recent word on bassing the beach but I know the fish are out there. Today, I visually checked a number of beaches – on another mission, beyond fishing – and didn’t see a soul casting out a line. It was gusty but not formidably so. I might jig a bit later. I’m thinking about BL. Below: www.airphotona.com. 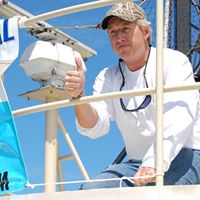 This week's video forecast for NJ/DE Bay fishing - stiff E/NE winds could dampen some spirits, but the incoming morning bite in the wash for stripers on clams, bunker chunks and bucktails could be decent in places. In the waaayyy back, hoping to catch the last hour or so of the outgoing tide around dawn for the summer flounder!

Please check this out ... but remember to come back here. http://www.youtube.com/watch?v=kgqf82EVDvc 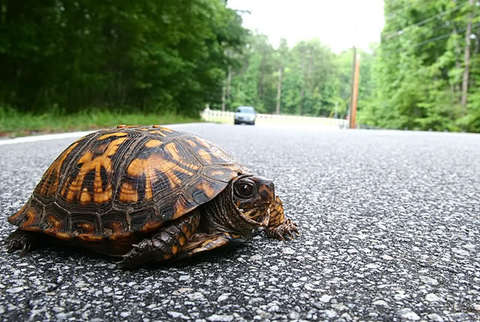 In NJ, box turtles are absolutely running into hard times, population-wise. That is due to habitat loss and environmental degradation, complicated by a shift of human population to the southern and coastal part of the state.

I bring up that "coastal" angle not only because that zone belongs to us but because, after years of herping, I rate our shoreline -- and inland maybe ten miles (before the serious Pines kick in), as one the most box turtle rich areas in the entire state.

The mix of richer coastal forage/plantlife, freshwater wetlands and -- until now -- wide open areas suited these turtles perfectly. Then, came the buildout and dramatically increased road traffic. To be sure, traffic is one of the primary killers of box turtles in out region.

What's worse of all for road-crossing box turtles is, ironically, their primordial defence mechanism of rapidly retreating into their shell when spooked.

Example: Take high-speed Rte. 539 and 72, death rows for so many road-crossing creatures. A turtle will come out of the undergrowth and see the asphalt expanses of those roads, dead ahead. Many turtle will actually stop in their tracks, to perform a sometimes lengthy look-see of the odd opening up ahead. (This is actually a perfect time to help the turtle cross the road for highly observant motorists.) 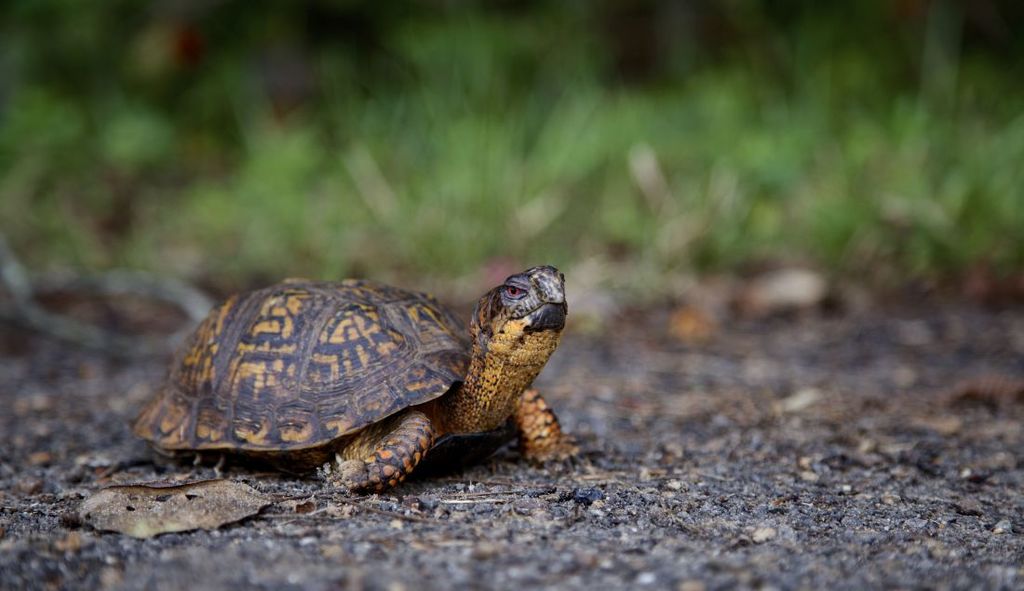 Anyway, when there is seemingly no danger showing, the turtle-in-waiting will make its move – at a turtle’s clip. For a box turtle, that clip is a proverbial turtle/tortoise pace. To be sure, some turtles can really scoot – for turtles.

When finally atop the asphalt area, very bad things can happen.

Those bad things come down to a spatial thing. The four tires of a hauling-ass vehicle cover maybe 1/20th of a lane – you can up the numbers for a four-lane highway. In the face of an arriving vehicle, a crossing turtle has at least a spatial chance of not becoming dead meat. Still, it is unknowingly playing highway Russian roulette. 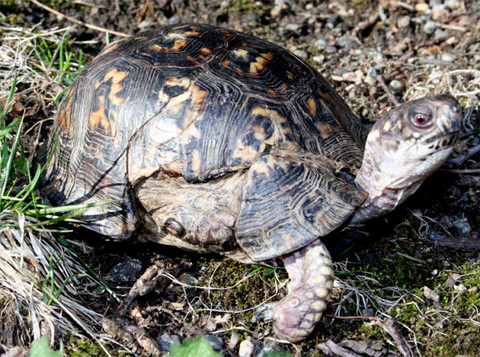 So, "Vroom!," a pickup truck appears, seemingly out of the blue, approaching the turtle. Let’s pretend it passs over, its tires missing it by a turtle-hair breadth.

The nerve-racking close call scares the ever-lovin’ pellets out of the turtle. It instantly and instinctively turns primitive and withdraws into itself, all "WTF!?"

If you've ever come across a box turtle that slams the shell door shut in your face, you know it can stay tightly within its fortress for a goodly time period. Hell, I’ve seen them climb inside themselves for half an hour -- finally opening up, just a crack, before eventually raising up their heads, for a fifteen-minute look-about.

Now, let’s back up to that road-crossing box turtle, spooked by a passing truck. Where we’d be yelling, “Run! Boxey, Run!” it has instead assumed what has saved its species for eons. Yep, right in the middle of the bloody road it has gone indoors. It's now idly lying there in the face of any and all arriving traffic – envision our highways on a Saturday.

Remember those special spatial specifications I gave you? Well, they change to laws of averages, as each chunk of traffic passes by and over. Short of me going on a turtle-saving mission -- that's me jumping out of that first truck that passed over -- the law of lethal averages turns against Boxey.

Below: What it looks like for a turtle with just one truck coming ... What it becomes for a turtle inside its shell -- in the road:

The above is based on a goodly number of times I've pulled over to save a mid-lane Boxey and then cringed (and cringed again) as each vehicle behind me zoomed over the in-the shell reptile.

I’m giving the details as a way for critter-friendly drivers to maybe gear their motoring behavior with just such wildlife possibilities constantly in-mind.

Eastern box turtles are threatened by the destruction of their habitat, observers say.


George Reskakis is proud of them, though he concedes they are not much to look at — scruffy piles of branches that dot Teaneck Creek Conservancy. In fact, Reskakis, who heads the conservancy’s Weed Warriors volunteer group, gets asked all the time why they leave the messy brush piles along the trails.

What the piles lack in looks they make up for in ecological value: They provide vital protective cover for the Eastern box turtle.

The flashy, multicolored turtle, once ubiquitous throughout New Jersey and known to generations of children who fed fistfuls of freshly plucked grass into their pet turtle’s aquarium tank, has been declining in numbers here and in other states, and New Jersey’s Department of Environmental Protection identifies it as a species of special concern.

Eastern box turtles live from Maine to Georgia and west to the Mississippi, and are designated a species of concern or special concern in a number of states, including Connecticut, Indiana, Massachusetts, Michigan and Ohio.

People spot box turtles more often at this time of year because nesting season begins in late May and early June.

Wildlife experts say homeowners can help by not disturbing the nests that female box turtles might dig in their flower gardens, mulch piles or lawns in the coming weeks. A box turtle will lay up to seven eggs in the nest, then leave. The eggs incubate on their own.

Brian Zarate, senior zoologist with the state’s Division of Fish and Wildlife, said box turtle habitat often intersects with the suburbs, contributing to the species’ decline. The main threats include habitat loss and fragmentation — the turtles can’t move safely between patches of habitat because of roads, railroad beds, parking lots and other dangerous obstacles.

Another threat has been the illegal collection of these turtles for commercial sale in the underground pet trade, Zarate said. And since they seem like docile creatures, suburbanites who come across them may decide innocently enough to take them home as pets. But that depletes the breeding numbers in an area.

“They are protected by law,” Zarate said. “If you see a box turtle you’re not allowed to take it home with you as a pet.”

Ben Wurst, habitat program manager with Conserve Wildlife Foundation of New Jersey, took an interest in the plight of the box turtle because he remembered encountering them in his back yard growing up.

“They’re one of the most beautiful turtles we have in New Jersey,” he said. The top of their boxy shell is vibrantly colored with mottled patterns of orange, yellow, olive and tan. Males have bright orange or red eyes.

Box turtles grow up to eight inches long, and can live into their 60s or older. They are not great swimmers, and live instead in woodland and open meadows — or suburban back yards.

They are true omnivores — they eat insects, worms, mushrooms, fruits and berries, especially from the sort of bushes and trees people rip out to create more formal gardens.

“One main reason for the decline would be habitat destruction — people removing their food sources,” Wurst said.

Since box turtles have small home ranges — about 250 square yards or less — cutting down a mulberry tree they depend on can be disastrous to a turtle — and to the breeding population of the area.

If removed from their territory, they can die trying to find their way back. Experts say that if you find a box turtle trying to cross a road, don’t take it home — just move it across the road in the direction it was headed.

Like other reptiles, box turtles are cold-blooded and hibernate by burrowing into the ground during the winter. They emerge in the spring, start mating around now, and lay eggs in June and July. The female will dig a hole about three inches deep in loose soil to deposit the eggs, which incubate for 87 to 89 days. The young will stay in their nest and go directly into hibernation, or emerge to explore for a few weeks.

At Teaneck Creek Conservancy, Reskakis, a Manhattan dentist and Teaneck resident, oversees the Weed Warriors volunteer group, which maintains the conservancy trails. They have created butterfly and bird gardens, and reintroduced some native species to the conservancy, including white oak, ash and red buds.

Now they have turned their attention to the box turtle.

During a recent walk along one of the trails, Reskakis pointed out several of the brush piles. “It’s a project of passion for me,” he said. “It’s great therapy and exercise.”

Members of the Bergen County Audubon Society, including Marie Longo, have planted blackberry shrubs at the conservancy as a food source for the turtles.

So when trail walkers ask Reskakis why he has left the brush piles, he has a quick, simple reply: “Brush is habitat. It’s a place for box turtles to hang out — and hide from predators.” 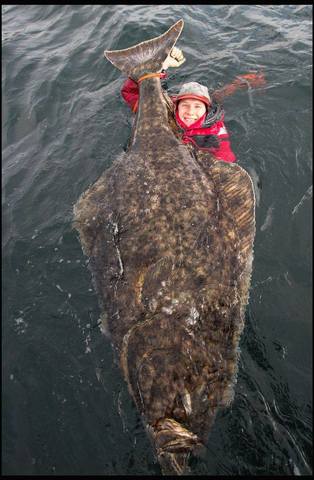