Further dispelling the belief that white cats can't jump ... as to their thinking a jump through ...

The courageous guard cat lies in wait for any and all intruders ...

Thursday, July 14, 2016: Last of the brisk south winds ending tonight. Did get a high temp into the 90s on the mainland, mid-80 on LBI. The winds will know lay down and although that’ll mean heat even for LBI, it is going to make for classic LBI, though I don’t see much wave action for surfers and such.

Even with the wind drop-off there starting tomorrow, there should be enough to maintain a fluke drift, maybe later in the day.

HOLGATE UPDATE: please check out this latest look video at the Holgate beach area just past the parking lot. Much has changed, fence-wise, after a bit of a cooperate to-do between the LBT mayor’s office and some Holgate businesses and residents.

Things worked out really well, though I somehow got thrown a bit under the shuttle bus. My video yesterday got rather well-seen and was targeted by town hall as being overly aggressive. It was said today that LBT had not planned on closing the far south end -- despite the fencing being placed down to the water’s edge. I guess, in my defense, I can note that quite a few folks were emphatically told by LBT officials that the entire beach area was being closed – and would remain that way.  OK, maybe they meant just for the day. Hey, I’ll buy into that now that an agreement has been reached and the beach opened.

I’m ecstatic that the fences are now how they, uh, were meant to be all along, i.e. allowing the public to walk on that soft and wonderful piece of beach.

IT AN ODD STANDING POINT: I’ve beached it in the wake of many of the Island’s beach replens and its indubitably weird. But standing on the new sands at the far end of Holgate felt the weirdest of all, though I didn’t get a chance to stand where the Holyoke Jetty once stood.

As the video shows, I have absolutely no doubt Wooden Jetty will rise again -- in some form or another, maybe not quite as raw and jettyish as it had been, but easily enough to create a breaking point for waves.

Will the wooden wall portion of Wooden Jetty, closer to the parking lot, re-appear? Definitely. A drop-off there could become very steep, unless mechanical repairs are done (probable).

It should be taken into account that the area just south of the Holgate parking lot is one of the most dynamic erosional points on the Island. What’s more, the nearby heavily-eroded un-replenished Wilderness Area will enhance erosion near Wooden Jetty. Much of the feathered sand area seen in the video will rather quickly migrate either outward – and into sandbar to the south -- or move onto the Refuge.

Translation: The Wooden Jetty area will remain dramatically erosive while the Forsythe Refuge just south of there will accrue migrating sand from the entire Nebraska Avenue to Holgate replenishment. Yes, that’s hopefulness on my part but there is also science behind that prediction.

ANGLING NOTE: As to angling that point of just-opened beach, it has to be excellent! I know it folly to predict good fishing but to have deeper water along the replenishment zone meeting miles of shallows to the south (refuge); that just smacks of gamefish hiding out just off the point, awaiting food to sweep around the bend in the beach.

And don’t go saying I’m burning a spot! There’s not a soul fishing there yet. In fact, I just might be among the first to even check on the fluking there.

SHARKS AND SUN GALORE: I did some fun shark story-talking with surfcaster Greg I. who landed a brown shark per day for two days running, Tuesday and Wednesday. Then, today, his daughter, Taylor, landed a third brown. They have been fishing two spinning reel set-ups on 10-foot rods. One of the reels had 20-pound test mono. The other had a 50-pound braid. 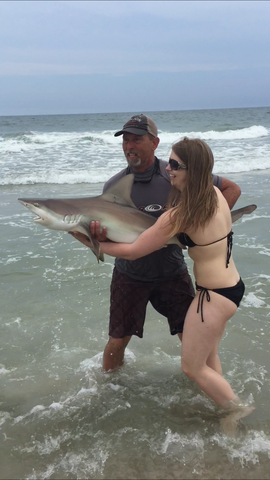 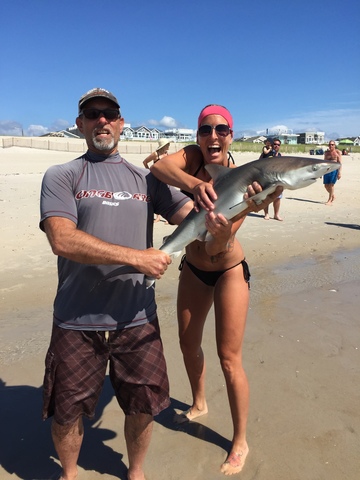 Due to the use of circle hooks, all three sharks were nicely hooked in the side of the mouth. That meant the teeth were grinding on hook metal. It also meant the fish were quickly unhooked, photographed and released. Circle hooks rock! 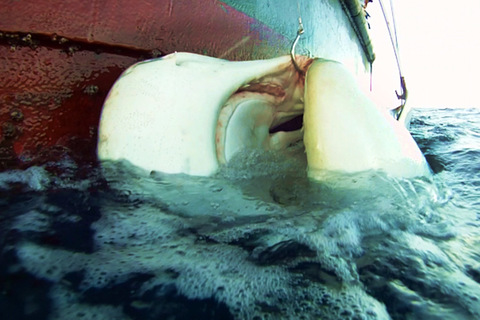 We all know our nearshore waters are loaded to the gills with this species of protected shark but what made these three-for-three hookups of utmost interest was their timing. All were caught under a high midsummer sun.

The timeframe of those hookup is intriguing for me, since I’m always into what’s called the natural history of a species. That’s more the observational angle, watching how an animal goes about its daily life; its patterns and the tendencies. 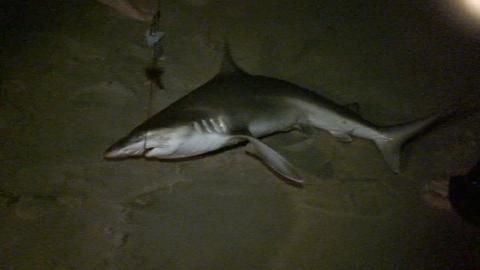 While a sudden increase in daytime hookups might seem insignificant, it is to a natural history scientist. The diurnal feeding by a nocturnal feeder might simply be happenstance, possibly due to baitballs gathering near the beach. I saw some large baitballs off Surf City today. However, if these daytime hookups are a trend, it could be the sign of a healthy hike in the brown shark biomass. An increase in biomass could force smaller/younger sharks to hunt throughout the day. It might even indicate the now-obvious heavy showing of highly-nocturnal sand tiger sharks might be knocking some small browns off their night-feeding marks? At the same time, larger brown shark can easily stand their ground against other sharks of a similar size.

I’ve never been much on sharkacious night snorkeling or scuba diving but I’ll but it’s quite an active realm out there right about now … only yards off the beach!

Below: One of the species you don't want to see, day or not. Not to be tusted ... as I once found out while surfing off Sand Island, Honolulu. Any shark enthusiasts out there that can identify what type this is? And for the record.., it was "foul hooked". And released. He took off like a bat out of hell!!
— with Dylan Sparks. I had 5yr return client Matt Bailey of PA with his daughter Madison, son Jay, and their friend Julia Morrell (who never caught a fluke prior to today's trip). We fished a few skinny (aka shallow) areas early before the wind cranked and released a bunch of shorts and boxed a nice 18-inch keeper. Note that Jay had a nice fish on that took a quick dive upon seeing the boat and spit the hook - it's tail was BIG. Once the wind started to crank, we moved around and found a decent amount of fish boxing another 4 with Jay's nice solid 24 inch 5 pounder (weighed in at Bobbie's Boats). It was S&S Bucktails leading the way for all the keeps. Nice job by all with 5 total keepers (18, 18, 19, 19.5, 24) and a pleasure seeing Matt and his family year in and year out!!! Hope to see you next year! 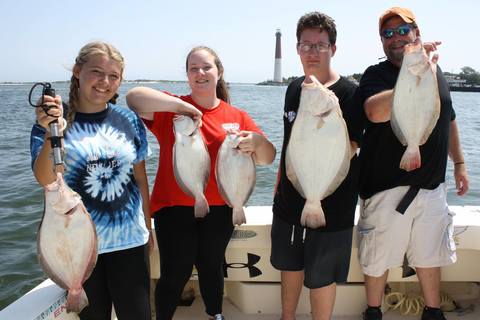 So, it only seems right that if I'm going to post my Open Boat and charter trip availability here, I should give the report.....Good or bad, right? It was bad. I shrimped the bay and the jetty with nothing but sand sharks to bend the rods. I ran out to Barnegat Ridge and although the water was 74 degrees and bluish-green, there was no life. No birds, no readings, and no hits. I pushed out a little further towards the Resor Wreck area but halfway into that ride the water was an ugly green color so I spun it back into the better looking water but was rewarded with only small blues terrorizing my bonita and tuna lures.

What does all of that mean for this weekend of fishing coming up? Absolutely nothing. It's going to heat up eventually. I'm thinking about mixing it up a little this weekend. We are going to offer some inshore shark fishing. Head out 5 to 10 miles with a few cans of chum and a flat of mackerel. Put out a slick on the drift and see what we can find. Not likely that we will catch the edible species like mako or thresher but I hope that we could catch and release some brown, blacktip, or spinners. A lot of fun on light tackle.

If the bay is more your thing. We could cast the 1 to 4 pound blues that are resident in the inlet these days under birds mixed in with a few hours of fluking.

I'm not giving up on the Barnegat Ridge either. A week is an eternity in fishing no matter what you are targeting. If you guys are game, so am I. In fact, we could start at the Ridge and switch to sharking. The forecast is for very light winds and calm seas.

Charter or Open Boat: Sat, Sun, and Mon. Call for rates and availibilty. 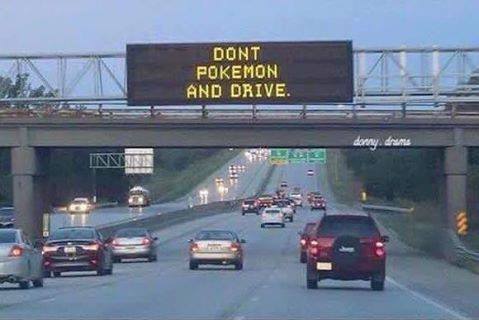