Thursday, July 07, 2016: Scalding on the mainland but nice as spice on LBI. News on NJDOT dredgery

closer look and at first I thought they were tuna. However, I then realized that they were sharks, hundreds of them in each pod. Most appeared to be 3-6' long. I had my striper spinning rod with me so I decided to see if they would hit a lure. I attached a lead head with a 5" shad to my 40", 50 lb mono leader. I was using a medium weight rod with a Penn Live Liner 550 filled with 40 lb. power pro. That was the heaviest tackle I had on my boat. First cast I had 3 sharks follow my lure to the boat. One hung around but would not hit the jig as I tossed it to him a couple more times. I found the school again, first cast to them nothing but on the second cast I got whacked real hard. The thing took off like a freight train and no doubt it was going to spool me. I was fishing by myself but I was able to start my engines and chase it all over the place. A half hour later I finally got it to boat side several times and realized it was a blacktip shark about 5' long and at least 75 lbs.. I would have liked to have gaffed it an brought is aboard for some pictures but I was not sure of the regulations. It was difficult to hold the rod with one hand and try to take some pictures at boat side because as it got near the boat it would go crazy and dive down. After bringing it to the boat a few times we both had enough so I broke it off. I believe all the other sharks there were blacktips although it is possible a couple spinners could have been mixed in as I did see one jump out of the water.

News first: I’m time-deprived today. However, I did need to pass on a political issue that might, at first, offer a sinking feeling to mariners.

You’ve likely heard that 900 state, county and local construction projects funded by the NJ Transportation Trust Fund (TTF) will grind to a halt starting tomorrow. That contains a tidy $775 million worth of fixes, including 440 projects in 565 local municipalities.

This is all happening due to a blink-first standoff between our Italy-bound Governor Chris Christie and the state senate.

According to a New Jersey 101.5 report by Michael Symons, “Lawmakers and Gov. Chris Christie weren’t able to reach agreement on how to replenish the TTF. A bipartisan proposal to raise the gas tax the equivalent of 23 cents a gallon got traction when it was paired with tax cuts for estates, charitable donations, retirement income and the working poor, but Christie and the Assembly scuttled that deal in favor of linking the gas tax hike to a sales tax cut.”

That brings me to that sinking feeling. Listed among the many projects about to be placed on hiatus is “Dredging Barnegat Inlet Area Channels, Barnegat,” worth $2,702,958.

At first blush, that might seem to impact the dredging of the shoaled sand now making waves in the middle of Barnegat Inlet. Not so. That Barnegat Inlet hopper-dredger work is purely federal, predicated on the Army Corps mandate to “to provide a safe, reliable navigation channel for one of the most dangerous inlets on the east coast. The project is critical to a large fishing fleet consisting of full-time commercial, charter and recreational vessels that contribute to the economic value of the nation.”

The TTF’s “Barnegat Inlet Area Channels” project, under the NJDOT, refers to the now tediously drawn-out effort to dredge Double Creek channel, along with some smaller channels off Barnegat Light. There is absolutely no doubt this gas tax to-do will be settled by the scheduled start of the Double Creek dredging in fall.

A tad trickier, by my thinking, is the Causeway Bridge Project. Yes, it is an NJDOT effort, which might seem to leave it vulnerable to a work stoppage. However, it is also a combined federal project. What’s more, the Causeway work will most likely fall under a category of “essential” TTF projects needing to be maintained for safety reason. The standoff allows for using existing TTF funding, good through July, to pay for high-priority projects.

One place we could feel the TTF stoppage is over Eagleswood way, where the Route 9 resurfacing effort is currently underway … until, technically, tomorrow.

Below: Why I quit competing against Asians in World Speed Cookie Cooking events.

Below: Ball-playing time. And yet another reason not to have a gorilla as a pet ...

Thursday, July 07, 2016: Scalding on the mainland but nice as spice on LBI. The side-shore winds kicked in early and have kept temps as much as 15 degrees cooler than the mainland. That’s the old ATL AC  (Atlantic Air Conditioning) at its finest. 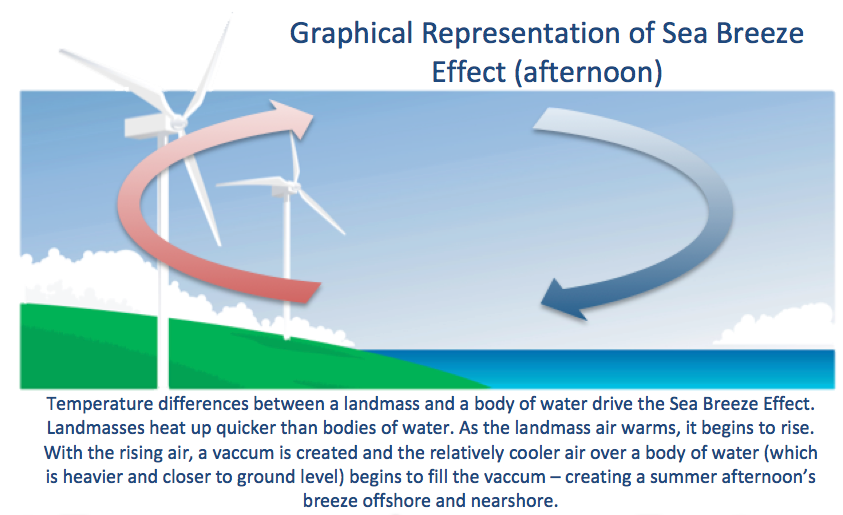 The winds have led to ocean, inlet and surfside choppiness. The onshore flow is also fueling some serious T-Storm cells just to our north and northwest. The easily-heard thunder means you need to head in – or off the beach – even though the skies aren’t rainy, or even all that cloudy south of Ship Bottom.

I’m seeing some fine shots of big-ass fluke; some of them 10-pound huge. On occasion, there are even full blown boat-bottom coverage catches of flatties. Sweet. Closer to reality, there are also some piss-poor reports. Yes, that’s fishing but there seems to be an unusual well-marked split between the have and have-notes. You gotta keep working your way toward have-ness.

Below: Julie Ruth Barnegat Bay.Great day on the water with friends! Two of three keepers today! 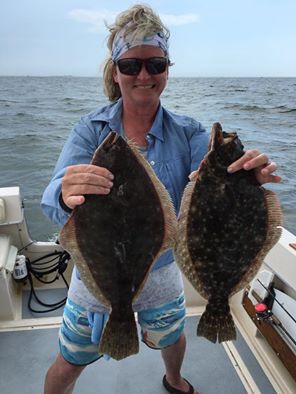 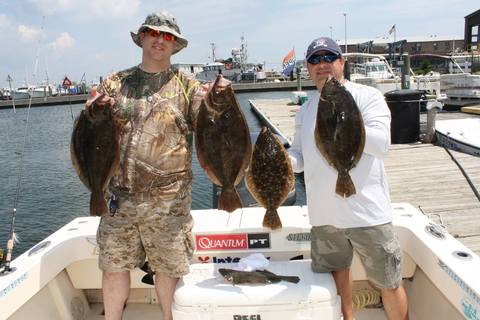 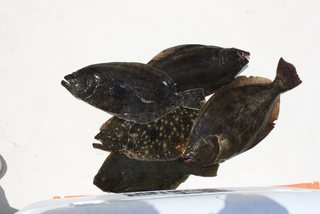 There is an unusually large showing of bayside skates. I’m half wondering if the increase in ocean sharks might not be sending these slow-moving meals-on-wings into B-Bay backwaters.

It was recently suggested that octopuses might not be of this planet. One look at a skate face and they should qualify at extraterrestrials on countenance alone. Below: "Then there was this time we were picnicking on Saturn and I turn to my ex and say ..." 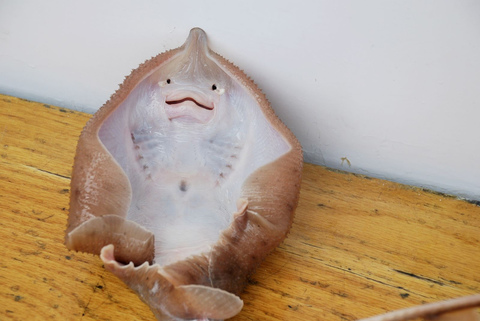 Beachside water temps have jacked up again, into the 70s. That said, longer-lived south winds now coming our way could cause some chilly-water upwelling.

In yesterday’s replen rehash, I noted the south end of the Holgate beachfront was in something of a state of limbo. There is still an effort to get permission to move replen sand further south. The Forsythe nesting plover nearest the project are seemingly on the move. The replenishment’s project manager continues a last-ditch effort to sink some sand south of Wooden Jetty, even if only partially toward the sunken jetty, which roughly marks the Forsythe northern boundary.  The sunken jetty marks where the project was projected to go until the plover factor arose. 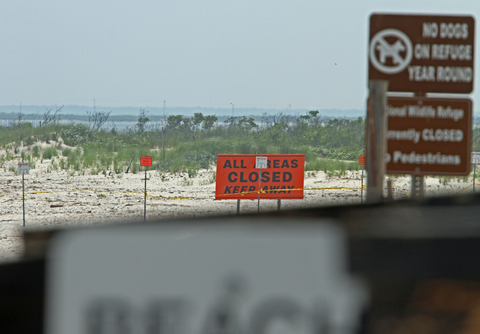 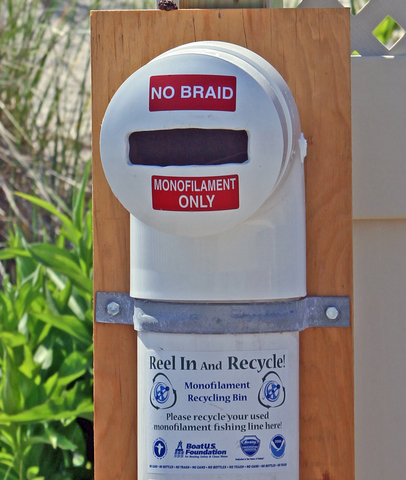 Since it is Shark week and the 100th Anniversary of the 1916 attacks I thought I should share my shark encounter. After only catching 2 keeper fluke offshore we decided to check the visibility in the south pocket of Barnegat Inlet on July 3rd. The water was clear and I jumped in to spear some fluke. I had a 19" first drop and threw it in the boat. I grabbed my stringer and attached it to my weight belt. I jumped back in and speared 2 more 19" fish and had them hanging on my stringer. About 10 minutes later I noticed a very large fish below me in about 8' of water. First I thought was a striper but it was definitely too big. Then it swam right up to greet me. It was a 5-6' shark. First thought was cool...a shark! Then I had to poke it in the face to keep it away from me. It kept coming back as I made my way back to the boat. I started to get a little freaked out because it would not back off. I guess it really wanted my fluke! The last time It came at me I actually pierced it's skin with my spear. I am pretty sure it was a brown shark, but could have been a juvenile bull. Tough to say since I did not have my Go Pro with me. The whole situation was a little hectic. I am just glad it ended the way it did! Thanks to my crew Peter Morris Scott Lash and Zachary Nestler

DUNE NOTE: I’ve been approached by a number of groups, from garden clubs to ocean-watch folks, about placing indigenous plants on the newly built dunes. I’ve run this by project folks and can only say for certain that any and all such indigenously-inclined plantings must be studied and okayed through the Army Corps of Engineers and the NJDEP.

Be assured, you cannot just traipse out there and plant some laurels or bayberry shrubs, even if they’re adjacent to the walkways and wouldn’t require – dare I even whisper it? – walking on the dunes.  This is not to say planting can’t be done after some careful planning and careful coordination with proper authorities. For now, though, it’s simply best to let the project first get finished, this fall (Brant Beach touch-ups). Once the sands have settled, talk of greenery can proceed.

By the by, no endangered species can be planted on the new dunes, even though the clean sands might seem like a fertile place to nurture same.

Below: This is one of those species that could keep a dune from re-plening. HC. Beach  Amaranth.

As you might know, the replenishment project is in place for 50 years to come. Updates seem likely every seven years, on average, based on erosional triggers. Any endangered plants popping up on any portion of the dunes would preclude a renourishment of that area. While this might seem a boon to some project naysayers, all that would mean is a possible weak spot in the dune system – a hole where the ocean can leak in.

And don’t think for an instant that even a small opening can’t be ruinous. Scientists have shown that the east/west beach walkways, as we used to have them on LBI, acted as ocean water conduits during flood times. And those openings were only eight-feet wide. 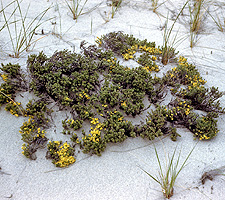 So I went for a quick trip for fluke today. Jigging the mini-Hogy I couldn't stop catching these guys. Shut out on the fluke. 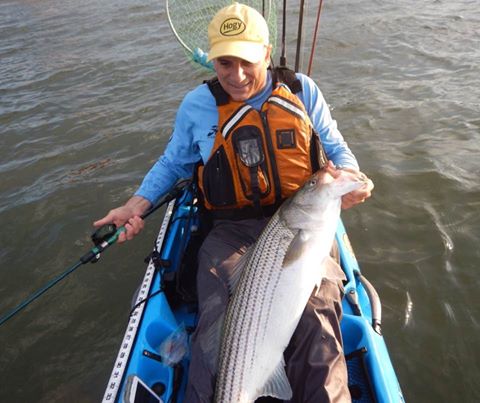 Looking into one of these for kayak or paddleboard fishing  ... Mobile "Pocket Portable" LCD Fish Finder - NEW 2016