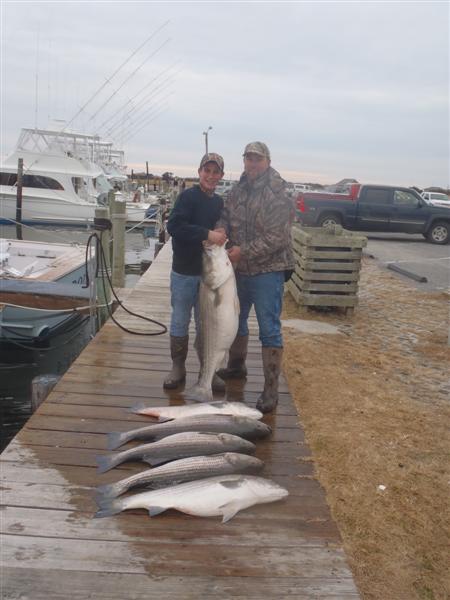 Above, top : A 63-pound bass taken near Oregon Inlet, N.C. by Chase Furlough, here with dad. It was a state record -- for 2 days --  before many-year-old Keith Angel, below, bested it by a pound at the same fishing hole. Just for the funof it, Valerie (Oceanside B&T) and I were bandying about the concept ofdevising a late-winter/early-spring garbage fish contest.

As you know, by asearly as February, skates and dogfish and herring and (not garbage) hake andeven stone crabs are fairly easily caught in the surf. I think it would be ablast for anglers to get out there, fully targeting these otherwise despisedfish.

Obviously, therewould need to be some juicy prizes to get people to face the elements but I’llbet it would be a blast. I also think it might get folks more attuned to thebeachline hake fishery that can sometimes be right next to the beach.

One March in thelate 1990s, I caught hake after hake fishing from my Ocean Kayak atop sandbarsoff north Brant Beach. I was using bloodworms I had by-caught while scratchingclam on the exposed mudflats off High Bar Harbor’s Dike. Rigging-wise, I wassimply drifting small pieces of bait on a fluke-like setup: a couple feet ofleader material with a 1/0 hook on the tag end and a one-ounce sinker run off adropped loop maybe 18 inches up from the hook. It was attached to my reel linewith a barrel swivel. That day, I only had a few worm pieces so I left ‘embiting, so to speak. It was also duly frigid. They cooked up like somethingfrom a gourmet restaurant. I was going to put a light mango chutney sauce onthem but they wee so good baked with spices it would have been a sacrilege tohide any of that taste.

DIG IT: A thumb’sup to those independent snow plowers who finally got to pay for thosedamn-costly truck-front plows they bought to make some extra jingle in winter.

Combining thesnows of this winter and last, those dudes utterly quieted their spouses,  who had just about incessantly bitched aboutthe “stupid damn plows” sitting rustily in the yard. The sudden ka-ching and ahearty “Here’s some extra shopping money, dear” will surely keep those plows ingood summer stead with the ladies of the house, even to the point of, “Maybethis spring we can turn that plow upward and I can plant some nice flowers inthere.” You got, hon.

I chatted with afellow who has bigger plow mounted to a pickup truck not much larger than mine.He mention what he made off the Holiday Blizzard and I was floored. I eventried one of those, “Well, now you can pay me back the money you owe me.” Thatgot him thinking -- for about three seconds.

Obviously, thoseplow boys aren’t overly wild about my forecasts assuring that we’ve seen thelast of this winter’s serious snow. And they have plenty of optimism to foster,even if La Nina stays in play. It’s then still a 60/40 call, meaning there’sstill a 4 in ten chance the winter will remain hunkered down in snow.

LAZY KIDS: Isensed just how old I had gotten while chatting with some loitering teens.Actually, they’re good kids I’ve known for years. I excitedly told them there’splenty of money to be made in shoveling snow. Gospel truth, they looked at meas if I had just suddenly switched over to speaking in a rare Tibetan dialect.The notion of throwing a shovel over shoulder to go door to door and randomlyask homeowners if they wanted their walks and driveways shoveled didn’t evenregister with them. It was essentially too much to fathom. At the same time,older folks in my hood were looking out their snowed in storm doors all butpraying to see an “old-fashioned” kid wanting to make a quick $25 behind theshovel. Hell, the homeowners would even supply the shovels. No enterprisingkids showed. The call of computer games won out, hands down – and thumbsup.

In my day, thegoing rate for a “two-way” dig-out (walkway to the house and the driveway) wasa couple/few bucks and a tip if you squared off the corners.

I recall one early1960s storm, I made an astounding 50 dollars in just 48 hours. To this day, Iremember carefully placing the unheard sum of money on my bed and stacking andrestacking it in piles – fifty piles of singles, 25 piles of two ones, etc. Iwent to bed literally holding my cash cache, awakening now and again to checkwith it, making sure  it was cozy andcomfortable. Oddly, I had oft daydreamed of just such a windfall but when itarrived I had no idea what to do with the money. I ended up buying abuild-it-yourself canoe from an ad I saw in the back of Argosy magazine. Inever even took it outta the frickin’ box.

“…Canada has signed a deal with China to export seal meat and oil, which somehope will be a lifeline to the Newfoundland sealing industry. This has longbeen a goal of the Canadian government. The seal industry was set back when theEU imposed a ban on sealing products, despite the fact that the sealpopulations in Canada are extremely healthy, while many fish stocks and otherwildlife managed by the EU is are under extreme stress. China also will startimporting Scottish salmon - and the growing impact of China on seafood pricingis the subject of our video today.”