Thursday: Back to beach sweetness.... Anything that requires a running start can end up badly.

My hard-earned life lesson: Anything that requires a running start can end up badly:

Thursday: Back to beach sweetness. I’ll mention here that the black flies got so bad late yesterday that an otherwise perfect beach was left in the dust as folks fled, swatting madly as they went. Today, light easterly onshore winds have muscled away the biters and shepherded in the warmest LBI waters of the summer. The water is also clean and duly colorful. It should be great surfcasting toward dark, as the tide comes up.

Somewhat oddly, the fishing pressure, especially on the boating side of things, has dropped off. Oh, there are plenty of flukers out there but not nearly as packed in weeks past. I’m thinking folks might actually be getting a bit flattied out, though I also see some maneuvering to work now and free up the long Labor Day holiday weekend, this year running – in LBI days – from Thursday, Sept. 1 through Tuesday morning, Sept. 6. Yep, play your work cards right and it can be a long one.

Got another reports of a major sand tiger shark, toward the south end. Second-hand report had it pushing eight feet. I’m told someone will be contacting me about it. Unfortunately, I’ve been overrun with “huge shark” catches. I kid you not. I’ll bet you I’m going on a dozen communiques from folks wanting to have their shark catch – more often their kid’s catch – shown in The SandPaper. Just can’t do it. Show it in here? Absolutely!

An ardent sharker mentioned to me that he worries some shark-landers aren’t reaerating their catch, via the tail-hold, back-and-forth action. He hasn’t seen it per se but any readers of this blog seeing a shark caught might want to step in and make sure a shark is fully revitalized before release. That said, I hesitate offering his next suggestion: Leave the shark in the shallow surf water the entire dehooking time. There’s a video of a guy doing that down south and a wave pushed him and shark sideways and that sucker, the shark that is, bit his leg something awful. Fortunately, the shark wasn’t all that big. You have to admit, an eight-foot sand tiger taking a panicked bite out of someone’s leg wouldn’t leave much for even the most talented plastic surgeons to work with.

Tom S., who lives for fall fishing, excitedly asked if the sharks will be around into fall? I can’t see how this current insane showing of the gray suits won’t have some sort of impact on mainly early fall fishing. In fact, I’m betting the biggest sharks of the year will be opportunistically plying the water of the Holgate Rip. Boy, that got him champing at the bit, possibly a bit too much. He’s running out to buy a thick meat stick, coupled with a Penn bait reel. He’s thinking 30 #. His wife is gonna kill me.

Chatted on-line with a gal who bought a see-through kayak – and loves it. She’s down NC way but lived in Jersey and brought up an interesting point, noting that it’s easy to paddle out past the more turbid shoreline water and get into the blue, so to speak. Her best time has been paddling over very shallow water of the Sound down her way. She’s stunned by how many huge rays are there. Not much shark-seeing action for her though.

Got asked a technical paddleboard-related Long Beach Island Surf Fishing Classic question, namely, would it be legal to paddle over and fish Not-Tucker’s-Island, the very grassy, sedge-like island off the backside of the Holgate west peninsula? If I have to vote on it, I say absolutely not. Even if you wade over there at low tide, you’re somewhere else, by my thinking. There is a board meeting coming up so I’ll get that confirmed but I’ll bet the board will agree. And, to be sure, there could be some very good fishing on the both the west and east side of that island.

Yes, the saltwater registry in still in play.

Further below you’ll see a 9-pound fluke taken off the GSS. This is the time of year that a halo of fluke forms around the artificial reefs. Reefs rock!

August is now in full swing in Beach Haven, and while the bay action is dominated by small panfish, the fluke are out in full force around the inshore reefs. In addition, the bite offshore is starting to really pick up. The captains of the Beach Haven Charter Fishing Association are currently experiencing their best fluke action of the year.

Captain Gary Dugan of the “Irish Jig” has been running two trips a day and returning with full fish boxes most trips. When asked how the action is, Captain Gary noted, “Fluke Fishing has been great.” While there are still large numbers of throwback sized fish, the “Irish Jig” has been finding its share of keeper fluke with catches ranging from 4-8 keepers a trip. He has been fishing the Little Egg and Garden State South Reefs. Along with the fluke, there are black sea bass and snapper blues around. When he moves to a wreck, Captain Gary has been finding sea bass, porgies, blackfish, and occasional triggerfish.

Captain John Lewis has been taking anglers out on the “Insatiable” and returning with good amounts of fluke in the box. Captain John says he has been fishing both in the ocean and in the inlet. The fish seem to be moving around. He is itching to get offshore to get in on some of the good white marlin and mahi-mahi action he has been hearing about as well as a few big eye tuna and swordfish.

The BHCFA’s Junior Mates Program had its last official class session on Thursday, August 18. On Friday, August 19, the group will participate in the John Koegler Memorial Junior Mate Fishing Tournament. Following the fishing and weigh-in at the Beach Haven Marlin and Tuna Club, a luncheon celebration will take place at the Club. Thanks to the generosity of the Koegler family and other sponsors of the BHCFA, there will be many great prizes awarded to the successful anglers.

It's a beautiful day in Holgate. And 25 pilings are out at wooden Jetty. 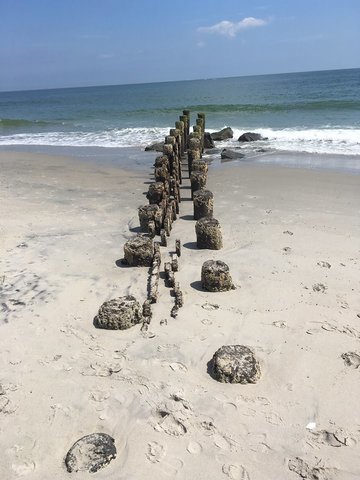 And a look at how Holgate is filling in south of the parking lot. From Trish Stiles. Sorry but this had to come down.

The Gordon and Betty Moore Foundation has provided Monmouth University’s Urban Coast Institute (UCI) with a $1.2 million grant to continue the development of a Mid-Atlantic Ocean Data Portal  a free, state-of-the-art mapping and information site focused on ocean areas from New York through Virginia.

The funding will support the work of a project team consisting of researchers from Rutgers University’s Edward J. Bloustein School of Planning and Public Policy and the Center for Remote Sensing and Spatial Analysis (CRSSA), The Nature Conservancy and the UCI.

The grant will enable the New Jersey-based UCI and its project partners to add new content to the publicly accessible site in 2016 and 2017. New content includes interactive maps depicting fishing areas, oceanography, tribal ocean uses and a trove of data that will illustrate marine life distributions and trends throughout the East Coast in detail.

The Portal was initiated under the guidance of the Mid-Atlantic Regional Council on the Oceans (MARCO) with previous funding provided by the Moore Foundation in 2015 and the National Oceanic and Atmospheric Administration in 2012 and 2013.

“We are deeply grateful for the vital contributions the Moore Foundation has made not just to the Portal project, but in improving the state of ocean planning in the Mid-Atlantic and other regions,” said UCI Director Tony MacDonald. “This technology will help policymakers and regulatory agencies make science-based decisions that promote healthy marine ecosystems and sustainable ocean use, as well as provide the public and stakeholders with readily accessible spatial data and the best information available about ocean environments and economies.”

The Portal offers a selection of over 200 layers depicting human activities and natural processes taking place at sea. The Portal has grown as an ocean planning tool, particularly for its ability to illustrate where there are possible conflicts – for example, between a potential offshore wind site and shipping traffic – and compatible uses at sea.

The Portal has served as a key information source for a historic first-ever Draft Mid-Atlantic Regional Ocean Action Plan produced by a Regional Planning Body composed of representatives from six states, tribal entities, federal agencies and the Mid-Atlantic Fishery Management Council. In addition, it supports the work of MARCO, a partnership of the governors of Delaware, Maryland, New Jersey, New York and Virginia.

Under the current project funding from the UCI and the Moore Foundation, Rutgers has a leading role in the operational management of the Portal and in developing a plan to support the implementation of the Draft Ocean Action Plan and continued work by MARCO.

“The portal project has been a great demonstration of collaboration between Monmouth and Rutgers universities,” said Jeanne Herb, associate director of the Environmental Analysis and Communications (EAC) Group at Rutgers University’s Edward J. Bloustein School of Planning and Public Policy. “Our work together is a model for how institutions that house unique skills and expertise can complement each other, and we look forward to building on this partnership for projects, programming and academic opportunities in the future.”

According to Richard G. Lathrop Jr., director of CRSSA, a major goal has been to make the Portal a central information hub accessible to all of the Mid-Atlantic’s stakeholders.

“This has entailed working with stakeholders to better understand their decision-making needs and policy concerns, as well as designing the user interface to be simple and user friendly, but still allow ready access to the incredibly rich data set,” Lathrop said.“Working with MARCO on developing the Portal has challenged the team here at Rutgers to expand our expertise in land use planning, policy and geographic information systems into the coastal and marine realm

The Draft Ocean Action Plan calls for the Portal to play an increased role in informing ocean management decisions such as siting offshore wind turbines, permitting aquaculture operations, and determining which fishing communities should be consulted when an area is being considered for sand extraction. 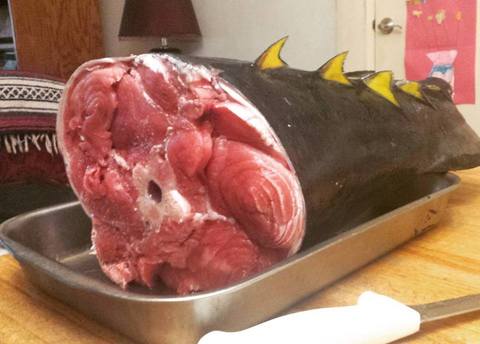 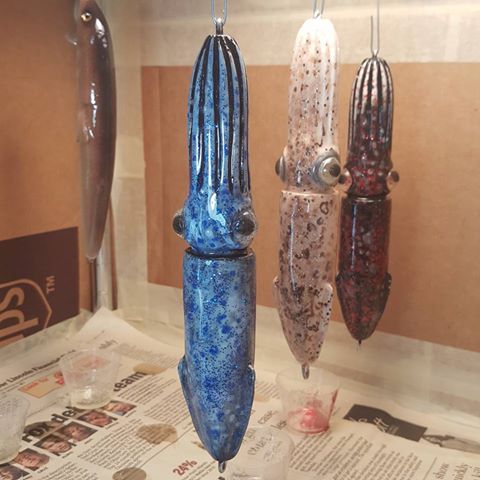 I had the pleasure of taking out former co-worker & Merck Pharmaceuticals employee Mike Galindo of Westfield, NJ and his two boys Bennet and Mason on a 4hr Bay Fluke trip. We started working some areas close to the inlet, but the incoming water was down to 65F which slowed the bite down. We moved around to find some warmer water, and the trio boated 15 fish with 2 keepers (21, 18.5). Both of the keepers were caught by the two boys who were relatively new to buck tailing. Great job, and the S&S Bigeye came through again. Hope to see you in the fall for Stripers!! 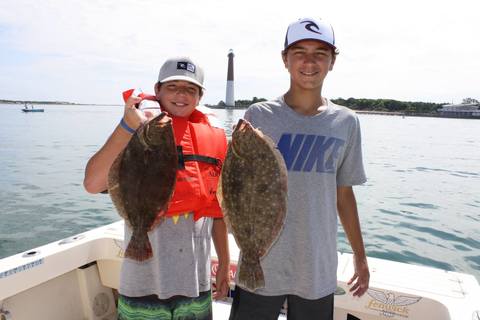 1st 9 pounder I have seen this year. Mike caught his 27inch plus fluke on a bucktail with peanut bunker on GSS. 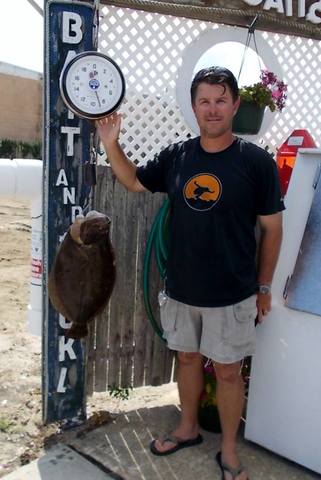 Spectacular beach day with Jeff Shanklin and his beautiful daughters catching bluefish! The kids faces in Jeff's pic are priceless! 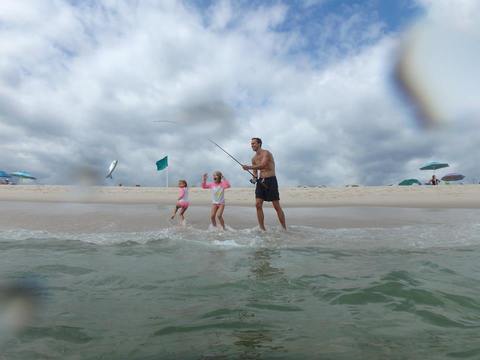 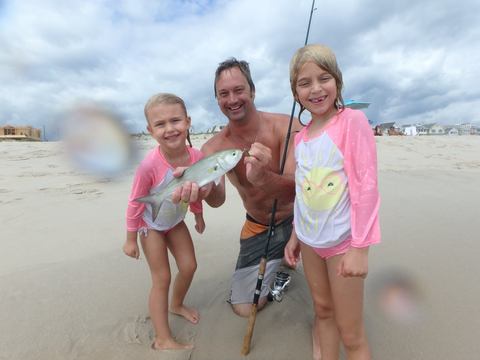