Just what I was afraid of ... Both of them are Trump supporters!

Boredom proof: Musical chairs breaks out at a soccer match.

Thursday, August 11, 2016: Hot enough for ya? I’m asking that in advance since it’s gonna be highly hot – along with that being the most aggravatingly trite hot-weather question known to man. Of course, should you be a desert iguana, that question can be a lot more evocative. Per one desert iguana asked if it was hot enough for him, “Actually, and providing you’re talking in centigrade, I could use an additional two to three degree increase in ambient temperature due, primarily, to my tenuous back tendons, which, since being sideswiped by those jackasses on dirt bikes, have been sensitive to chills. Also, there’s that rib cage maladjustment for the time I …” Hey, desert iguanas sit around for weeks doing nothing but staring into space going over and over what they’ll say if someone asks them the big question. Ok, that iguana thing might be a sure sign I’ve been out in the midday sun a tad too long playing volleyball. It’s the old “Mad dogs and volleyball players” paradox.

Below: Ship Bottom volleyball, Saturday 9:15 a.m. Must have some volleyball experience. 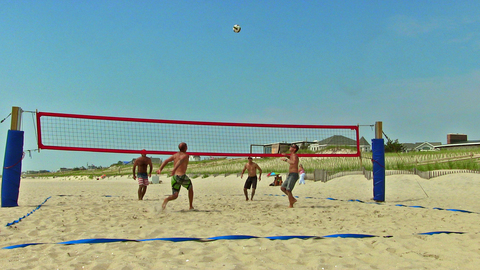 The south winds persist, though occasional going a tad southwest. That’s westerly tilt is huge for LBI’ing since it directs the heat pump our way – and can even spark greenhead invasions – then the SE wins out and all is right in the Island world.

Going off an IBSP report along with two local surfacsters, we have fluke in the suds. In this case, the IBSP report can relate to us in as much it shows the flatties are steadily bailing out of the soon to be superheated bay, which could warm into mid-80s. Those bayside water temps create some dangerously low dissolved oxygen contents, potentially deadly for some shellfish.  I’m sure Michael and the baymen have things under control. The bay heat will also drive every last west-bay mullet toward the inlets. It will still be many weeks before they go migratory. In fact, the next few weeks near the inlets will determine the average mullet size will be for the fall run. I fear the warmth could jack up  the mullet size; never good news for baitmen. 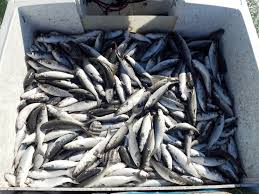 Here's some of my old video footage of mullet insanity at the Rip:

COUGAR TALK RISING: I won’t get into details until after I have a chat with some folks who swear to high heaven they saw – a few times -- a puma down in the exact vicinity near Bass River where I saw one in the mid-80s. That’s the exact timeframe they saw it.

Intriguingly, those folks say the sightings stopped as quickly as they arrived, which is consistent with a wandering predator, uncertain of where it is or where it’s going, i.e. a young animal seeking territory. That here-and-gone aspect also tells me these folks almost surely saw something since they had no such sightings  before or since -- as opposed to those folks who are endlessly seeing shapes and sundry things skulking about.  I’m doubly intrigued over some possible photos of paw prints floating around.

Hey, it’s all in fun. That was 30 years ago. The cougar-sighting statute of limitations ran out long ago.

Along those same mountain lion lines, one of the stories about the current cougar translocation talk had a respected member of the wilderness-loving community, John Tittle, throw in a personal experience regarding a Monmouth County sighting, evidenced through tracks. He told reporter the tracks were made by "A much larger feline” – far larger than a lynx.

All that said, I’m the first to fully admit that a lack of sightings by loads of sharp-eyed deer hunters has me very reluctant to think in terms of any current cougars in the outback, or in the hillier up-north. At the same time, I suspect I’ll be getting some feedback from hunters who have seen unexplainable, large cat-like objects bumping about toward sunset. Since there is no hunting at night, that leaves a wide window of secretive stalk-about opportunity for a stealthy big cat.

The answer is out there … or not so much.

Dolphin, dorado or mahi, however you refer to this tasty and brilliantly colored fighting fish, just remember a bull…

83- warmest ocean temp ever recorded he said. Mahi in closer ? Looks like another one from the Sixties, Jay. Stay calm, it'll pass.

Well,here we go. My best friend's older son was driving down Caranza road near the Wharton Tract one morning a few years ago and had a deer come running across the road very fast and right behind it,a larger Cougar and a smaller one jumped into the road chasing it. He hit the brakes and said the bigger one stared right at him in the road for about ten seconds before resuming the chase. He said it's the truth and only wishes he had a camera to prove it.His father is a registered hunting guide and he is a hunter also.