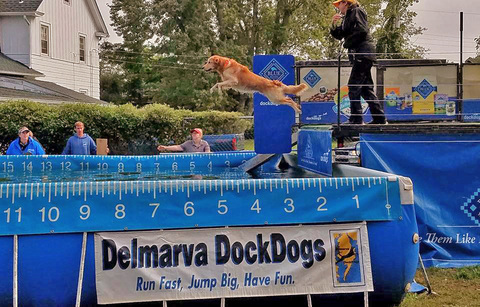 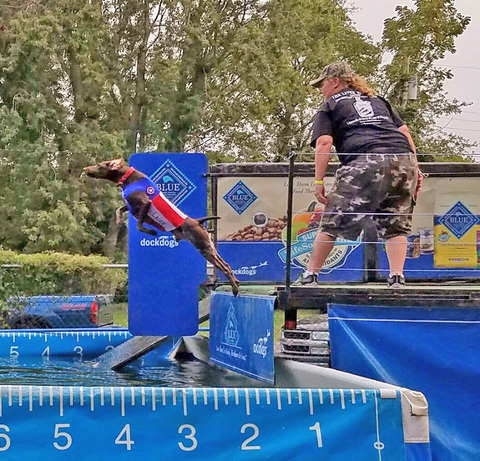 Trying to fire myself up for another work week ... Sunday, September 25, 2016: The mullet have made it. Huge schools of jumbo mullet are running the beaches and driving the inlets. The action is north to south, with some sidebars inside Little Egg Inlet. 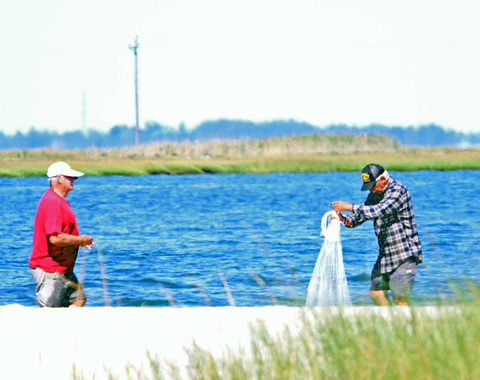 Below: George  ... from Laura Fredrickson Gilbert 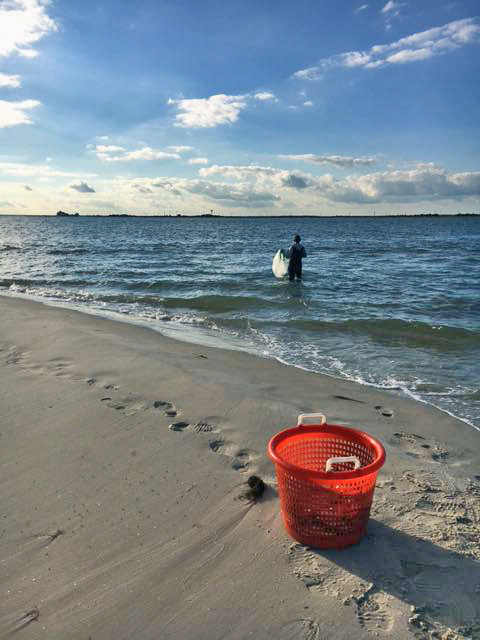 Greeting the baitfish are small stripers and a battalion of bluefish. The bass are far from 28 but the blues have built in size to cocktails, 2-pounders, though still tons of small ones.

As fluke season bid a fond farewell, some keepers came from the surf, though the bite on a whole has quiet.

Last night was as chilly as I’ve felt since spring. While there was that proverbial touch of fall in the air, we’re really nowhere near those typical full-blown fall weather patterns that usher in days of offshore winds. In fact, this coming week will be all over the board, with light to moderate winds going full-cycle -- west to north to east and then around to the south – a couple times over before next weekend.

What these highly-changeable weather systems could mean to fall fishing, by my calculations, is unusually warm ocean water holding on strong. While air temps will hover a bit above normal, I wouldn’t be surprised to feel somewhat unseasonal 70-degree ocean waters right into October. That is not good for bassing. However, tons of bait slowed in its migration might act as a bass attractant, mainly schoolies.

Afternoon trip - client Chris Lipinski hooks his 1st ever striped bass at 24in - good enough for the table with the NJSB bonus permit. Nice job! And please don't make it another "boats only" big-bass season ...
Chris Potts Not that folks haven't been warned  ...

the ocean off 77th Street in Harvey Cedars. Three swimmers were sucked out in a large rip current. The victims were brought to shore by HCBP & HCPD. 1 was transported to the hospital. Important to swim in front of a lifeguard on a guarded beach to prevent drownings & injuries. Guards will be posted on Middlesex Ave. all week from 10am-5pm. 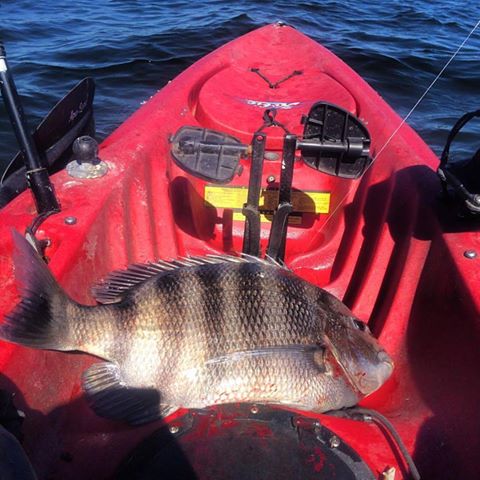 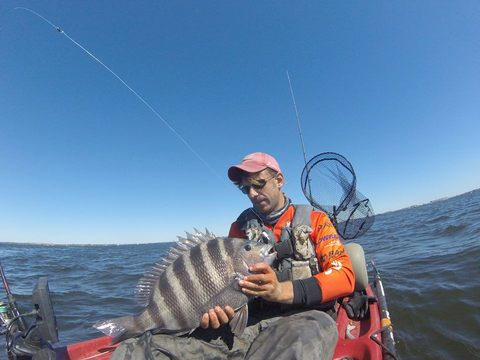 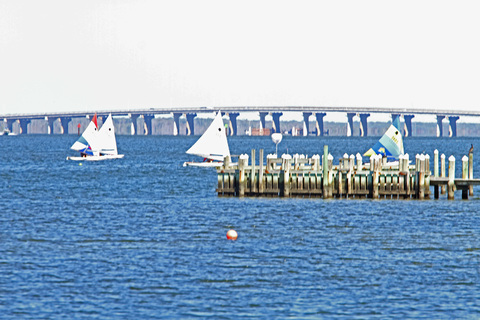 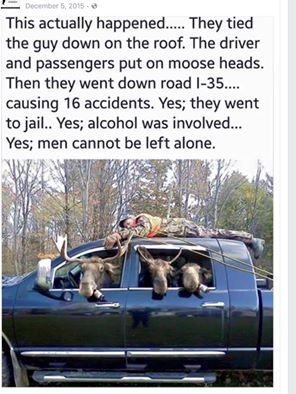 This is Pauline Whitcraft (Deb's mother) at the age of 22; she was a popular LBI striped bass fisherwoman! Her mother, Christina Kunze, had the world record (which still stands to this day) for a channel bass caught in the 1950s. Bob Engel  It never gets old, fresh fish for dinner. 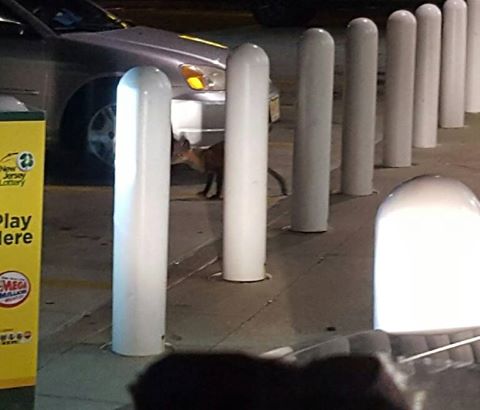 Below: Porgies are a fine, fall wreck option. Totally delicious. These are what we call porgies, while other areas use the name to somehow mean bunker. 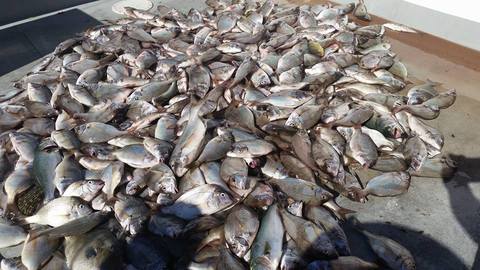 Fish Monger II Sun 9/25 Porgy Limit (10 man) - Well it was a great action filled day on the bottomfish grounds. Drop n reel action with a load of double headers. Besides a 10 man limit of 500 porgies the amount of very lucky seabass that went back was crazy. Some real jumbos... Anyhow the guys were very busy all day. Also had 18 blues a spiney puffer a pinfish a trigger and a bunch of small Jacks . Lots of cutting for
Michael Szegeski and
Darren Flynn . Crew was a blast jokes were as good as the porgy bite! Thanks guys

Researchers on north-west coast of Alaska startled to discover Caspian terns 1,000 miles farther north than species had been previously recorded 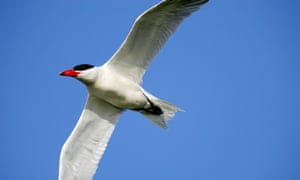 Eyebrows would be raised if American crocodiles, found on the southern tip of Florida, decided to relocate to New York’s Fifth Avenue or Moroccan camels suddenly joined the tourist throng outside Buckingham Palace in London. Yet this is the scale of species shift that appears to be under way in Alaska.

In July, researchers in Cape Krusenstern national monument on the north-west coast of Alaska were startled to discover a nest containing Caspian terns on the gravelly beach of a lagoon. The birds were an incredible 1,000 miles further north than the species had been previously recorded.

“There was plenty of shock, it is a very unusual situation,” said Dr Martin Robards, Arctic program director at the Wildlife Conservation Society, which found the nest. “We checked with Caspian tern experts and they were all very surprised they were this far north. We get Arctic terns here but these terns are much bigger, they really stand out.”

The terns, usually found in Washington state, successfully bred and chicks have now flown the nest. While it remains to be seen whether Caspian terns will become ensconced long-term within the Arctic circle, the epic relocation is emblematic of how warming temperatures are causing a huge upheaval in the basic rhythms of Alaska’s environment. Next week, scientists will gather at the White House’s first ever Arctic science meeting to deliver the confronting news.


“I’ve been up here 25 years and the amount of change that has occurred in Alaskais shocking,” said Robards. “We’ve been focusing on things such as the temperature and sea ice here but now we are thinking ‘oh my God what is going on with the wildlife?’”

Alaska is warming at twice the rate of the rest of the US, with the winter temperature 6F (3.3C) warmer than it was 60 years ago. Snow and ice has retreated, spring is coming earlier. The landscape is changing and so are its residents.

“To be 1,000 miles further north attests to how much the globe has warmed,” said Terry Root, a biologist and senior fellow at Stanford University. “Birds follow their physiology, nothing else. If they think they should move, they move. Alaska has warmed so much that it is causing havoc to a lot of nature.”

While most species aren’t able to move as far as terns, scientists are noticing shifts across Alaska. Moose and beavers have moved north of the Brooks Range and onto the Arctic plain, which increasingly offers suitable vegetation as the regionwarms up and greens.

Red foxes have moved in and have started to outcompete Arctic foxes. A similar thing may happen if the beefy Caspian terns start to push out their smaller cousins. The relationship between grizzly bears and polar bears may be a little more amicable – as their range starts to overlap there have been reports of a hybrid “pizzly” bears in the Arctic.

But the situation for polar bears is otherwise grim – they are losing life-sustaining sea ice critical for hunting and breeding across the Arctic. They are being forced onto land, where they risk starvation. This desperate scenario is shared with walruses, which have already suffered a 50% drop since the 1980s. In recent years tens of thousands of the tusked beasts have had to crowd ashore, with many perishing in stampedes.

The melting on land is just as stark. Over the past decade, Alaska has lost 850 gigatonnes of water from its shrinking glaciers, enough to raise the global sea level by 2.9mm. We are living through the fastest Arctic glacier decline in at least 6,000 years, according to Dr Martin Sharp, professor of Earth and atmospheric science at the University of Alberta.

“If the warming trends continue then we expect to see continuous retreat,” Sharp said. “We are seeing the complete loss of glaciers, areas that had ice caps in the 1950s don’t have them now. That trend will probably increase.”

Alaska is being locked into an unhappy cycle of events. As the declining glaciers lose albedo, or reflectivity from sunlight, they absorb more heat and therefore melt further.

The vegetation poking through thawing permafrost aids the spread of wildfire which in turn releases more carbon dioxide – flames have recently licked areas of Alaskan forest previously unburned for thousands of years. The amount of area burned each year in the state is expected to double by 2050 even if the world acts swiftly on climate change.

Summer Arctic sea ice is forecast to winnow away completely by the 2030s, which will be a boon for tourism operators looking to traverse the opening north-west sea passage. The Crystal Serenity cruise ship, with passengers that paid up to $100,000 for a cabin, arrived safely in New York last week after a 32-day journey through this newly reliable corridor.

But this decline threatens more traditional pursuits. Indigenous communities are finding the thinning ice too treacherous for fishing, while the 1,000-mile Iditarod dog sled race faces an uncertain future. After record winter warmth, Alaska baked as the season turned to spring – the temperature from January to April was an incredible 11.3F (6.2C) warmer than the long-term average taken from the 20th century.

Still, Alaska and neighboring Canada may well prove a haven for overheated animal species in the future. The state will still be cooler than the lower 48 states and has plenty of wilderness.

“The Caspian tern is a success story in many ways,” said Root. “Unfortunately, many animals won’t be able to move. There’s only so far a salamander can crawl or a gopher tortoise can walk. We stand at the beginning of a mass extinction event.

“One of the most important wildlife corridors runs between Mexico and the US, so Donald Trump’s stupid wall could be a huge problem for nature. At least we won’t have a border like that with Canada, I guess.”

Great catch of Porgies and a couple other fish.My late Grandfather used to bring them home when I was a kid along with some big Fluke.  Personally I have never fished for them,but am thinking of doing some wreck trips in the future.  Pogies is the name people call Bunker in some other areas.  Down south they call our Northern Kingfish ,Sea Mullet in N.C.,Whiting in S.C and Florida.