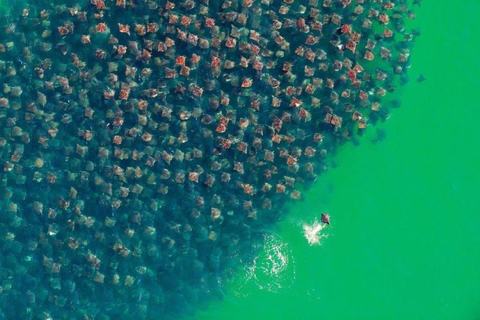 Above: How do you get an official count of one million stingrays? Start here.

Below: Click to get a look at the Holgate west point, yesterday.

Sunday, September 21, 2014: Well, yesterday sure had some issues. Many of us were geared for a drop-dead gorgeous, low-wide Saturday and the honkin' easterlies not only took the wind out of perfection sails but there was even a retrograde of uncalled for clouds coming in off the ocean, clouding things up for the middle part of the day. The wind stymied some boat fishing and the folks that headed out stuck close to the lee sides of sedges and such. However, there were a slew of boat anglers hanging near Little Egg Inlet.

The fishing on the south tip was actually poor. Short of an occasional small blue and a couple undersized fluke the goodly number of anglers there were catching squat, myself included. The outgoing water was a hair under 70 degrees with the ocean even warmer.

Not that it’ll help the now ultra-many weekend warriors but this upcoming week is gonna be as sweet as it gets: cool, calm and bright. It’s good being a local, though I fully wish one and all could join in on the offseason perfection. Just keep the flies at bay. That’s the one good thing with all these onshore winds, i.e. their fly clearing capacities. The couple morning that were calm immediately ushered in black flies and greenheads, both of which always have bad intent on their minds – though, to them, it’s “Why the hell are these big animals (us) worried about a single drop of blood; they’re filled with the stuff?” We’re just not that philosophical. Squish! Here’s some hot striper/fluke info from Ship Bottom, via email:

Just a heads up the fish are at the top of your street...

This past week a giant school of large Mullet went thru Ship Bottom with hundreds of birds - I thought Blues but didn't see any splashes - was using a Hopkins and getting nothing when a Guy at 21st Street pulled two Stripers out on a teaser and Big blue and white plug... The one was close to legal the other was a school type short... The guy asked me what they where?  No shit - first time fishing... I said - they are stripers but short and gotta go back he took his time getting them back in but they made it.  A couple of days later I caught two nice small blues and a fat keeper (had to pinch the tail to get 28") the striper nailed my custom color plug in the shore brake really cool to see happen.

Also I had a giant Fluke fly out of the water after my plug earlier in the week - I couldn't believe it.  A real door mat.  You are right medium to big plugs I uses a Dark blue top light blue upper yellow side and white bottom (can't loose).  I have been using this combo all year and have not been able to keep the plugs as they are getting taken.  I really think you need to park the truck and walk up to 18th and plug South to 23rd and back - has been working for me when the wind is not blowing a gale. 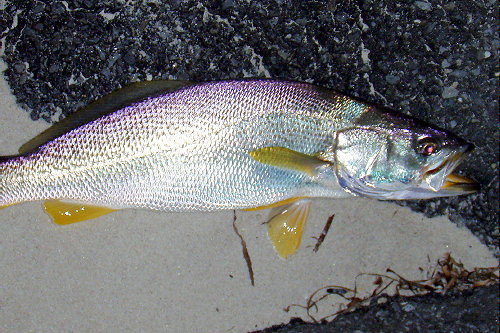 Above: Damn pretty fish. I dubbed them sparklers for a good reason.)

I had an email asking about weakfish and I got nothin’. I got that one small one and otherwise I haven’t heard a peep from sparklers. As you know, the species as a whole have been going through some hideous times. We hadn’t seen it here because we had been what might be called the last bastion of weakfish, going back a few years when we were knee-deep in them. Now we’re facing the reality that Delaware Bay and other once-prime weakfish locales have been facing: no weakies. What a loss. It’s not like we’re rolling in gamefish variety around here.

Speaking of which (variety), where the hell did those hordes of croakers go? We had them pretty good around Little Egg Inlet for the later part of summer. When in the house, they’re usually very much a fall fish, even edging closer toward the beachline. Nothin’.

I’ve already remarked on the dearth of kingfish, which are the next best meat fish when the fluke season ends.

What’s more, I’ve been throwing net quite a bit and not one single spot. That’s real odd. Did I mention we’re hurting for variety this year?

As to fluking it’s going out with flying colors for boat anglers. I’ve had reports of great keeper catches. With Sept. 27 approaching fast, it looks like this coming week will present the best chance for surf casters to catch flatties. Think in terms of fresh mullet, which take casting well and allow for a steady retrieve. By the by, fluke hits in the surf hit are way different than fluke from a boat. In the suds, fluke will often really swack a bait, since they’re feeding on passing baitfish – fast passing baitfish -- which require a no-prisoners grab. A couple days back, I had two come clear out of the water after my pencil popper, affirming their wiliness to go balls out for a baitfish. 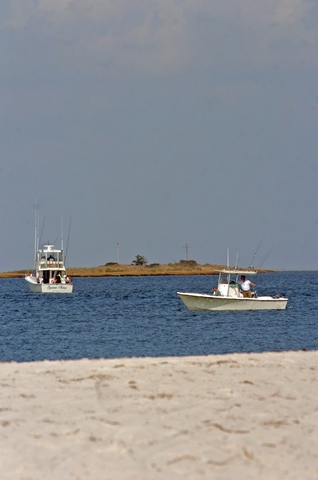 It was hard to work with mother nature this week, come on mom, but she was grateful enough make conditions favorable at times. Did a solo magic hour session Wednesday afternoon. Broke the inlet and ran a little north then dropped back two Clark spoons with the intentions of catching false albacore. Even at 7 knots plus one pound bluefish quickly became annoying. But the blues let7-8 pound albie to my hook for some screaming drag action. While trolling in the 30-40’ range I was marking lots of bait. When the sun started dropping I quickly plugged the inlet area which also was covered in blues but some were pushing 5 pounds. Did squeak out two short bass.

Sunday morning I plugged the inlet again at the end of incoming on some sporty conditions. Throwing plugs every cast was greeted with a bluefish. Once again they were running up to five pounds. Slipping into the back we had a blast with 2-4 pound blues. In the fog. The bay is in the mid 60’s and the ocean clear and around 72.

With school is session I am running trips weekends and weekday afternoon/magic hour/into the dark trips. Just give me a call.

On the nature side of things: anti-anxiety drugs are becoming more and more of a concern on aquatic species such as fish. Perch on Prozac, say what??? Not all pharmaceuticals drugs are assimilated by people taking them. These drugs in very low dosages enter our waterways through our wastewater treatment systems and have been increasing in concentration over time. I hope when we truly realize, or come to accept, the effects of pharmaceuticals drugs on our waterways in before there are too many negative effects.