Holgate beachfront adjacent to refuge is now open. However, the final stretch around the far south end, toward the back cut is apparently still holding skimmer chicks. It is closed, per Stu D.

(My photo from last year. This year's bird presence in Holgate is unknown, short of skimmers.)

Sunday, September 02, 2018: The end is so near I can taste it … and also choke on it. I once again threw a summer away for the sake of, well, meeting my mortgage payment. Add to that the ever-escalating flood insurance for homeowners on LBI and hi-ho, hi-ho, etc.

But screw all that downer crap. Not only has Holgate end opened, at least in part, but it seems there will be a more precipitous than usual drop in people on the Island heretofore, based on reports of absolutely no employees to fill work spots, many lost to departing college students. There is also a downward tick in fall rentals and hotel reservations for the arriving month. Now to think on term of some serious fishing, both beach and boat.

With August passing the torch of hot weather to September – another heat wave this week – it will take a load of time to attract cool-down fish. Best thing to do is go after fluke, blowfish, or maybe tropicals, like Spanish mackerel, that might be holding steady in our parts.

I’m betting there could be some worthwhile redfishing to be done once a read is gotten on where they’re now hanging. I know for a fact there are some thick schools of sheepsheads, most often near structure. Some mahi are to be had on the troll not that far from the inlets. Dare I again mention that sharks are close to a sure-thing after dark. E.M. reported a “nice speckled trout.” We used to see those weakfish relatives a lot not that many years back, showing best from now through closing (December).

I have gotten a few reports about the wide-ranging showing of huge bunker right off the beaches, more so up IBSP way.

Last week's bayside die-off of peanut bunker ended as fast as it began, thanks to an east-wind pushing cooler, fresher ocean water into B Bay. However, die-offs are almost certain to reappear this week. The peanuts are now as large as they get in the bay. They'll suck up oxygen at a critical clip, just as the bay waters return to the suffocating 80s. I’m betting that back-bay waters down Tuckerton, LEHT could get hard hit.

A BHW gal has been doing “exceptional” with her eel traps. She makes smoked eel of a world-class deliciousness. I met her when I was looking for some eel skins to experiment with. She gave me a slew of them, already tanned! I tied them together with leather cord but have yet to finish the project of making them into a large piecemeal “canvas” for art. No, it absolutely does not stink even one iota. In fact, check all the eel skin products out there: 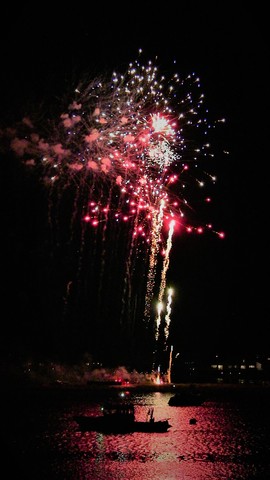 It's been a whirlwind couple of weeks. Did not have time to post any reports. Been booked every day and the weather cooperated to let us keep running. Fished Barnegat Ridge mostly for king  mackerel, bonita, spanish mackerel, and mahi.

The forecasted sea conditions look good for offshore fishing. Looking to run to the tuna grounds on Monday (Labor Day) and either run back there again or fish Barnegat Ridge on Tues, Sept 4.

Tuesday trip leaves at either 2AM if we run back to the tuna grounds or 6AM if we run to Barnegat Ridge. The Ridge trip returns at 1PM and is $175 person, 4 people max.

All fish are shared. You can call right up until our departure time to reserve a space.

The boat is also available for your private charter on these two days.

Pic: Hi Flier Capt. Nick DeGennaro with a nice little bull mahi that he pulled off of a floating crate on Monday.

(18/P75) TRENTON - The New Jersey Forest Fire Service is developing new guidelines for
prescribed burning following the signing of legislation by Governor Phil Murphy providing the service with more tools to conduct these operations that are critical to protection of public safety and forest-health management.

"The legislation the Governor signed last week provides the Forest Fire Service with more flexibility in determining the objectives of prescribed burns and provides clearer goals for owners of private property and nonprofits to utilize controlled burns to manage the health of ecosystems," said Department of Environmental Protection Commissioner Catherine R. McCabe.

Every year, the New Jersey Forest Fire Service has a goal of setting prescribed burns on about 20,000 acres of state-owned and other lands. These burns, also known as controlled burns, can take place in both forested and grassland areas and are critical to reducing fuels such as leaves, pine needles, fallen trees and branches, and shrubs that can act as tinder, causing wildfires to become difficult to control. These burns also improve ecosystem health and diversity by removing competing and invasive plant and tree species and enhancing wildlife habitats.

Among the key components of the legislation is an expansion of the definition of burn objectives to specifically allow for controlled burns to achieve ecosystem diversity, such as creation of wildlife habitats, and not just as a tool to reduce hazardous fuels.

The Forest Fire Service worked closely with numerous stakeholders, including nonprofits, environmental organizations and outdoor sports organizations to help the Legislature craft the legislation, which passed unanimously in both houses. Governor Murphy signed the measure, A1675, into law on Aug. 24.

"New Jersey has long had a vigorous and strong prescribed burning program that is respected across the nation and is often studied by other wildland managers, scientists and firefighting agencies," said State Firewarden Gregory McLaughlin. "This legislation will make the program even stronger and more effective. We plan to begin implementing many of the new measures in the next prescribed burning season."

In New Jersey, the prescribed burning season typically takes place during the late fall into the late spring or early winter, depending on weather conditions. Operations are conducted at this time of year to take advantage of favorable weather conditions, such as lower relative humidity and cured fuels. These conditions are more conducive for managing burns so that they better consume targeted vegetation and debris.

Sometimes, however, extremely wet conditions during the prescribed burning season may limit the ability of the Forest Fire Service to achieve its acreage goal. The new law provides the Forest Fire Service more flexibility to conduct burning operations at other times of year when conditions are favorable to achieve other resource management objectives.

Nearly all wildfires in the state are caused by people, usually by accident, carelessness, recklessness and even arson. The Forest Fire Service must carefully weigh risks of fire suppression against the potential for wildfires to cause property damage and endanger lives. The best tools the Forest Fire Service has at its disposal are public education campaigns informing the public about wildfire safety and prescribed burning operations.

During prescribed burns, Forest Fire Service personnel use handheld torches to set smaller fires to burn away fallen leaves, pine needles, fallen branches and other debris on the forest floor. Personnel consider wind, moisture and other conditions in setting the fires.

Wildfires can have the greatest impact in areas where people live in or near forests, grasslands and other natural areas. The sprawling Pinelands region in southern New Jersey is especially prone to wildfires because its ecosystem is adapted to depend on periodic wildfires for releasing of seeds for reproduction. Controlling the buildup of fuel in this region helps keep the forests healthy.