Per autumnal tradition, mainland monarchs got blown out to sea and will start to show aplenty when these offshore winds back off a bit. Unfortunately, we’ll have to contend with these large, Steelers-colored butterflies as they wearily wing back across the Boulevard, trying to get back to established over-land flyways.

More and more bass takes are coming to light. I’m not sure if it’s the higher angler presence over the weekend or the arrival of the first wave of fall linesiders. I received four photos of anglers with bass well over 28 inches. Most were single hookups, though one fellow got into “a few schoolies” while throwing clam.

What happened at the LBI Fishing Club’s “World Series of Surf Fishing,” held Saturday? If anyone was in that event and has a way I can get the scores, I’d like to publish them. I have no doubt kingfish led the point parade.

Overall, kingfishing is dropping off rapidly. We could still get some nice spurts, as kingfish from up north migrate past. Let’s hope next summer will be as good. 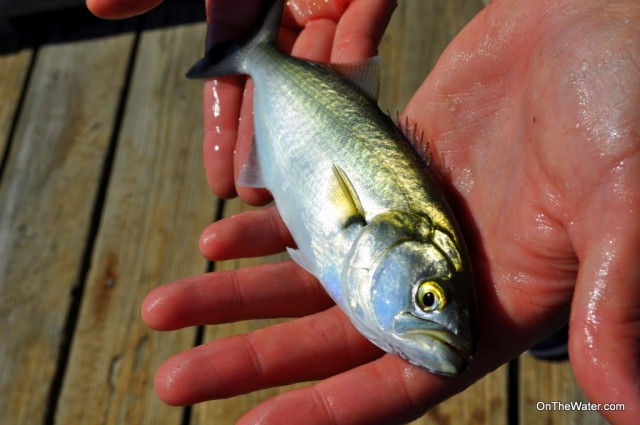 The bluefish presence is about normal for this time of year; mainly snappers and tailors. The only thing that makes no sense is how thin many the tailors are. I’ve caught dozens and none are as chunky as they should be with all the bait around. My guess is the 70-degree-plus water temps have their metabolisms going a mile a minute, burning off fat as fast as they down mullet, spot and spearing. The cooler the water, the slower bluefish burn off fat. But, why are there so many fat slammers in the “offshore” bluefish biomass? The big blues feed in the warm surface water then sink into very cool deeper waters to digest. No such cool deep-down water in close.

Striped bass, which have consistently slow metabolism rates, need to venture to cooler waters to oversummer. They go north or slide into deeper water off the Delmarva.

One has to wonder if the unprecedented warm water off New England this summer could impact our fall bass run. Did the bass go even further north, past Newfoundland, looking for comfortable quarters, meaning they’ll arrive late? Might the bass be much thinner than usual when they get here? While such stuff is merely light academics at this point, increases in global warming could becoming game changers for the entire East Coast fishing realm. Teasers and flies oh my ...

Nice start for the sign-ups for this years Classic!
It is because of you that makes this tournament a success. There are no letters sent in the mail to tell you about it so please remember. If you have a friend that has never fished in this tournament please tell him about it.
Because of you there are a lot of special prizes. If you would like to donate a special prize please contact me so it can be arranged. There are a lot of manufacturers that donate prizes to this contest but in addition there are several memorial awards from clubs and individuals and lot of prizes donated by local businesses that help make up the Special Prizes in this great tournament.