Below: From Jim V. at https://exit63.wordpress.com I’m hearing from fellow optimists that we’re simply going to have a late fall fishing season – starting any already-late day now. Bring it on. I’m AD/HD meaning I was born tired-of-waiting. When I was born the doctor wen to slap me but I was wad gone already. And what a fast and furious journey it would be. But that’s a story for another time. For now, just some insanely harried surf fishing would quiet the let’s-hit-it thing inside.

And if you’re a NASCAR fan supporting our native son Martin Truex Jr., Mayetta, the most that can be said for a last-place start is it’s better than no start at all.

After posting the 4th fastest qualifying time for this week’s pivotal Sprint Cup race in Talladega, Martin was penalized for running below the double yellow line at the bottom of the race course during qualifying. NASCAR promptly sent him to the far back of the racing class.

While getting sent to sit in the corner is bad enough, Martin is on the bubble for moving forward in the Chase for the Cup – the playoffs for Sprint Cup Series. To say the penalty couldn’t have come at a worst time is a racing understatement.

Not that Martin hasn’t come from the tail end to finish near the top in the past – just a few weeks back, in fact. The problem is getting past 40 some other racers is beyond stressful. Should he get win back a load of places, he then has to contend with the frontrunners in the Chase – but he’s already exhausted yet has to be on his A-game to keep from getting chewed up by the leaders. My guess is he’ll need to finish in the top 12 to get to the next playoff level. It’s not impossible but Martin has been known to run into bad luck at the worst possible of times. Here’s hoping the last-place starts gets the bad luck out of the way and he’s theretofore bound for glory. But back to fishing --  which many a caster did this weekend, as part of the ASAC (www.asaconline.org) event held yesterday in Ship Bottom – not to mention the Maximillian Foundation boat tourney also held yesterday.

According to ASAC event organizer Greg O'Connell, by the end of yesterday, the leading team had 32 scoring fish, totaling 356 inches. “Mix of bluefish and sundial. Few hickory shad. Lots of short blues and good number of small summer flounder (which don't count). Nothing ‘classic’ size yet.” The contest has one more fishing session from 730-1030am this morning. 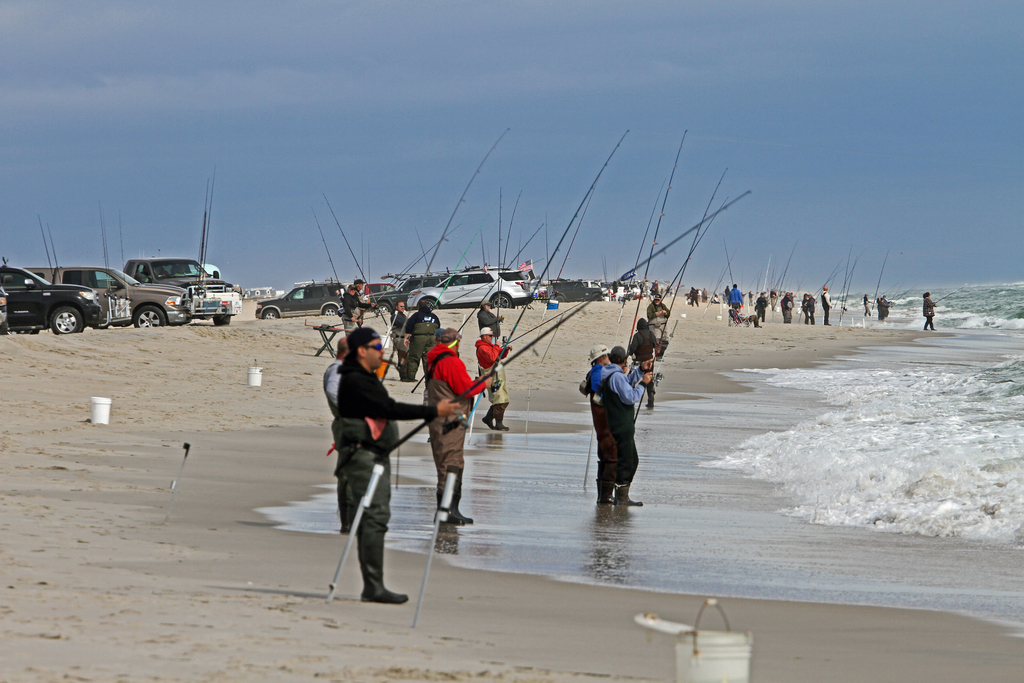 Message question: “I was wondering and thought you might have an answer. My in laws have owned a house in the dunes for the past 13 years and I've noticed a change in vermin. Since sandy there's is certainly less cats more squirrels, rabbits and even a family of raccoons. Is this the case? Has anyone else seen anything like this and how the heck do they get here? Any ideas opinions would help since I ask anyone who is near me when I see any of the above. Thanks.”

Good question – and good observational skills on you part.

We’ll start with the feral cats, which have been greatly reduced by a highly successful (almost remarkably so) trap-neuter-release program actively being done by the Friends of Southern Ocean County Animal Shelter. TNR is described at www.alleycat.org.

Might that it lack of ferals lead to more squirrels are just as might-ful, might it be that deciduous trees of LBI are coming into size. Remember, some larger trees taken half a century to reach the size squirrel need for their digs.

But you can discount Sandy when it comes to possums, raccoon and foxes. I have no doubt the hard-freeze of the bay in recent winters – especially last winter, per the experts on animal control – opened the flood gates to these highly-adaptable species. Raccoon populations have gone gonzo hereabouts. Since spring, pest control businesses have been capturing them by the hundreds. The raccoon are then, uh, relocated. If you’re like me, you hate the thought of kill-captures. Perish the thought. In fact, if pest control folks are smart, they’ll take all their captured critters just over the bridge to the mainland, then, come the next bay freeze, they’ll rush back --- having tasted the decadence of the foodstuffs in our rich-community trash. Releasing captures just over the bridge is tantamount to job security for the pest folks.

During last winter’s hard bay freeze, foxes were frequently seen fox-trotting across the bay, hell-bent to reach LBI. I saw one, late-day, on the north ice while driving atop the Big Bridge. I pulled over at the base of the bridge thinking it might be a disturbed dog. But, a quick binocular look showed it was a fully winterized (bushy) fox as it bee-lined toward Surf City. It was essentially going from sedge to sedge. I have an affection for foxes so I didn’t mention my sighting to animal control. 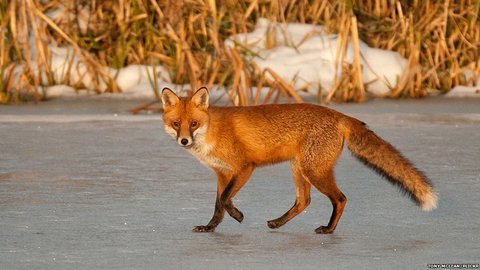 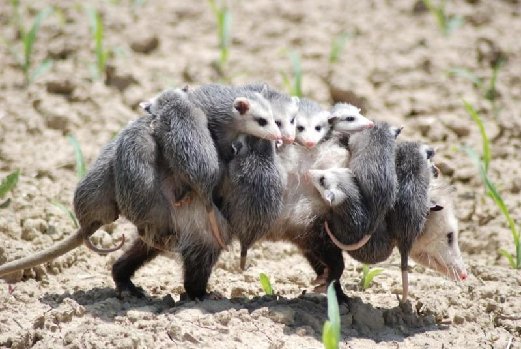 As for possums, they – along with otters galore – have always been here in huge numbers. The possums thrive in the sewers. The otters flourish in sewer outflow pipes on the bay side. 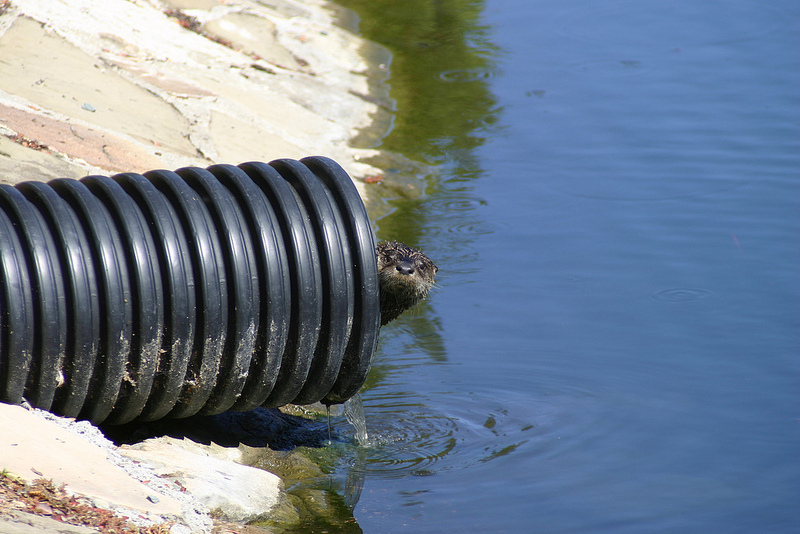 But there was one thing that Sandy did to a hated form of wildlife – a form I have long hesitated to write about, namely rats. LBI was crawling with them prior to Sandy. However, these were the proverbial wharf rats, which kept to themselves, near bulkheads and even larger jetties. Rodent took a catastrophic beat-down from Sandy.

And don’t think that the feral cats kept the population of rats at bay. I saw some of these bayside rats and all it took was a quick glare from one of them to keep even a feral Tom cat hugging the back-porch food dishes. Speaking of the battle of the bowls. There is a wildlife pecking order when it comes to who has dining priority on the put-outs -- dished out by animal-sensitive feeders.

Coyotes (we have none on LBI … yet) are alpha. Even foxes and oft-fearless raccoon want no part of these wild canines.

Below: "My Kibbles and Bits!" Next, it’s a dish-privileges standoff between raccoons and foxes, with the coons holding the upper hand -- literally. They’ll wield things -- in their very human-like hands – to get the upper edge in a dish-bowl showdown.

Below: It helps to use a rock when knocking on the glass door ... to let someone know the bowl is quite empty. 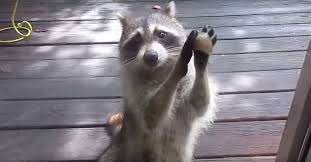 Possums and cat are oddly compatible at the dish. They’ll eat together with only the normal nosing out and occasional hissing that cats do. I’m pretty sure cats see possums as just about the ugliest cats they’ve ever seen, possibly showing a whisker-worth of pity by allowing one too simultaneously share the same bowl. “Here ya go, buddy. Have a bite. It’s not like you don’t have enough problems as it is. Who does you air, Bob Dylan?” 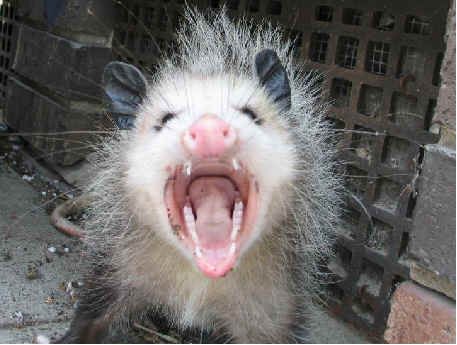 But, as I’ve always said about possums, they have the whitest teeth in the entire nature community. I needed to throw them bone. They are some ugly-ass animals.

Below: One last quick bite before a raccoon departure. 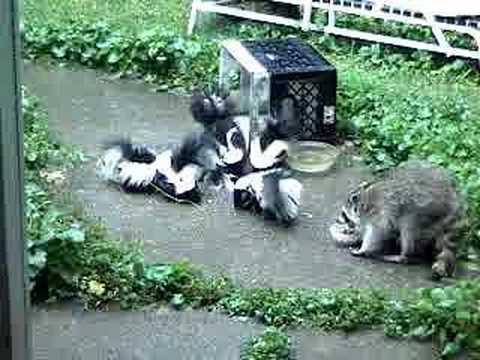 I can't put skunks at the alpha level, bowl-wise, but nothing messes with them. Even coyotes eat one last bowl bite and then slink off in the face of an arriving tail-raised skunk.  j-mann)

It was nice to see a bass this morning!

This one was trolled on Jim Andersens boat "Haakon" and caught by his son Liam. His fish weighed a little over 34 pounds and was caught on an eel.

It's on fire tonight 19 fish since dusk.