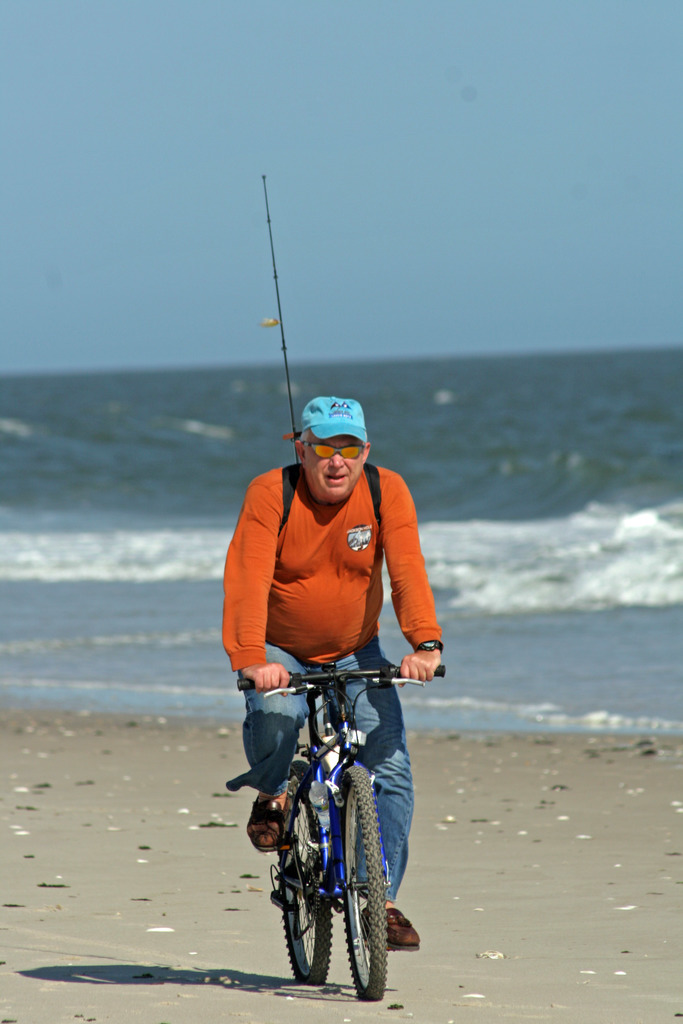 Above: Bucking the honking south wind while biking the beach to reach the Holgate Rip, Jim Stevens, Beach Haven, is intent on making the 2-mile trek to plug away.

However, it was far from things to come. Daylight brought hard south winds and, for the south end, some serious grass. That muck ended by North Beach Haven northward. Still, there weren’t a ton of fish begging to be caught. A few larger tailors blues – 3 pounds – were taking bait. I toyed with a couple of them in Holgate, using a chrome Red Fin. Both opted out of being landed all the way, though one early release I could have kicked to the sand but wasn't that into it.

I’ll continue to rave about the mullet flow. Today saw tons of the little buggers bolting southward along the beach.  It was the exact look and flow we see near the start of the run, circa mid-Sept. Go figure.

Some fairly harried bird play not that far off the beach, Nebraska Ave., late-day. It looked like smaller bluefish on rainfish – too far out for mullet and there aren’t that many bunkies about.

Below: Folks were still out there swimming today. They said the water wasn't that cold. I heard of a 16-pound bluefish. With today’s ocean water in the low 60s, we’re ready for them. However, nothing slammerish seemingly on the way, based on reports just to our north. Big blues, unlike bass, almost always reach here after being reported up north.

These south winds could spark some serious striper action.  That predawn timeframe continues to shine.

Above: A birdplay scene from times past. Soon we'll see the same.

Large to doormat flatties still being caught – and obviously released.

Tide swings are going to get very radical for this coming week. Today’s low tide was way down. It did offer a chance to see where the better cuts and troughs are at along the LBI front beaches.

Below: This is one of those things that drive buggyists bananas. These folks set up their windblock right in the tracks buggies have to take. I'd like to think they're clueless but I have to think this is just a taunt on their parts. 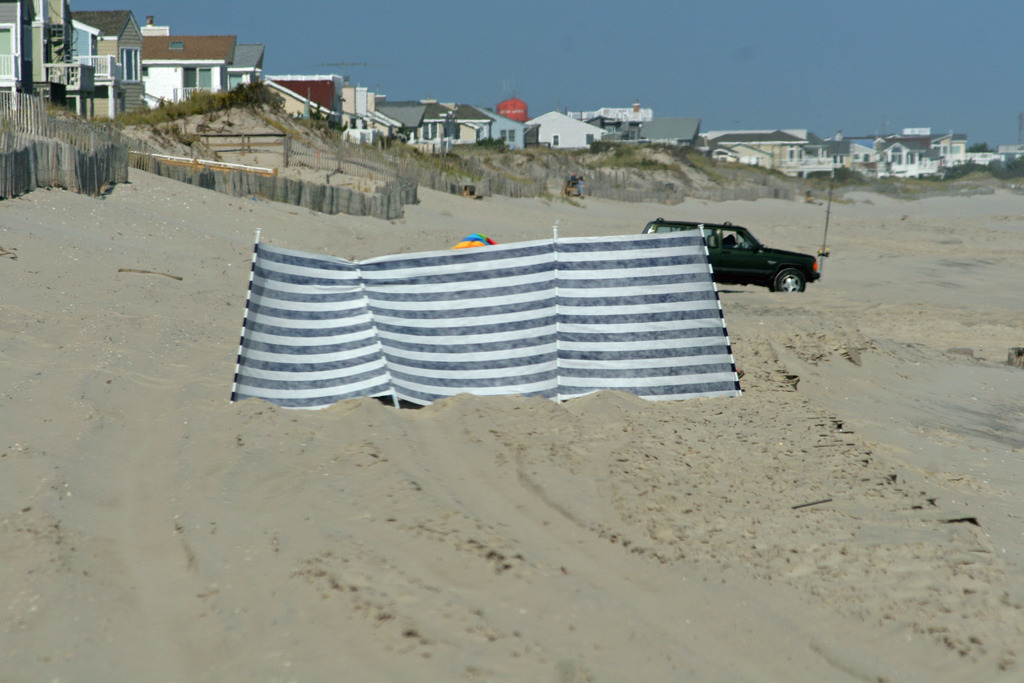 Looks like things are about to break wide open for the fishing around here. As I noted last week, there's been a tremendous amount of bait along the beachfront for weeks now and more pouring out of the bays every day. All we needed for fishing to get hot was a couple of cool nights to get the water temps down a bit, and convince the fish that it's time to start fattening up for their annual trek south. And that seems to have happened this week.

I had David Volk from Lake Helen, FL out with me on Friday along with his best friend Tom Madjesky from Burlington County. The guys are avid fishermen and knew we might be a little early, but schedules dictated we try this week to get Tom his first striped bass and fortunately the fish cooperated with a steady stream of stripers and bluefish coming over the side throughout the morning. Just for good measure, they added in a couple of small weakfish to complete their Atlantic Inshore Slams all within a few miles of the inlet. That's the way we like to kick off our fall season!

With all the bait we have close to the beach this year, things should only get better from here. The calendar is getting pretty full, but I do still have a couple of openings for anyone looking to get in on what should be another great fall season.

The recent cool nights sent the bay temps down to around 56-57 while the ocean is still in the 60’s.  Looks like the peanut bunker have started to make their move out of the back and into the open bay.  The bass have responded to the cooler water, shorter days and bait movement.  The one issue is that getting away from the blues to the bass can be difficult at times but perseverance will pay off.  Still some signs of summer as evident by this nice fluke my son Garrett caught on a live spot Saturday evening (picture attached).  A few weeks late to invite home for dinner so it was released.  Still some nice male crabs around in the back and what might just have been the last shed of the year occurred this week.  I pulled two nice soft shells out of my traps on Friday.  Only a few prime dates remain so give me a call if you want to set up either a fall inlet / bay or ocean trip.