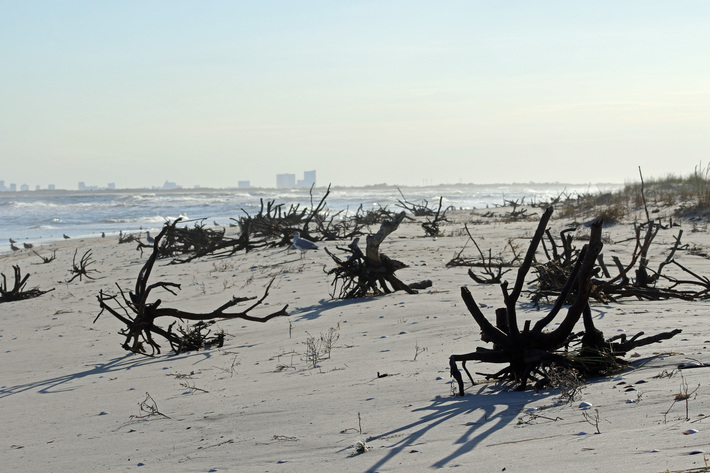 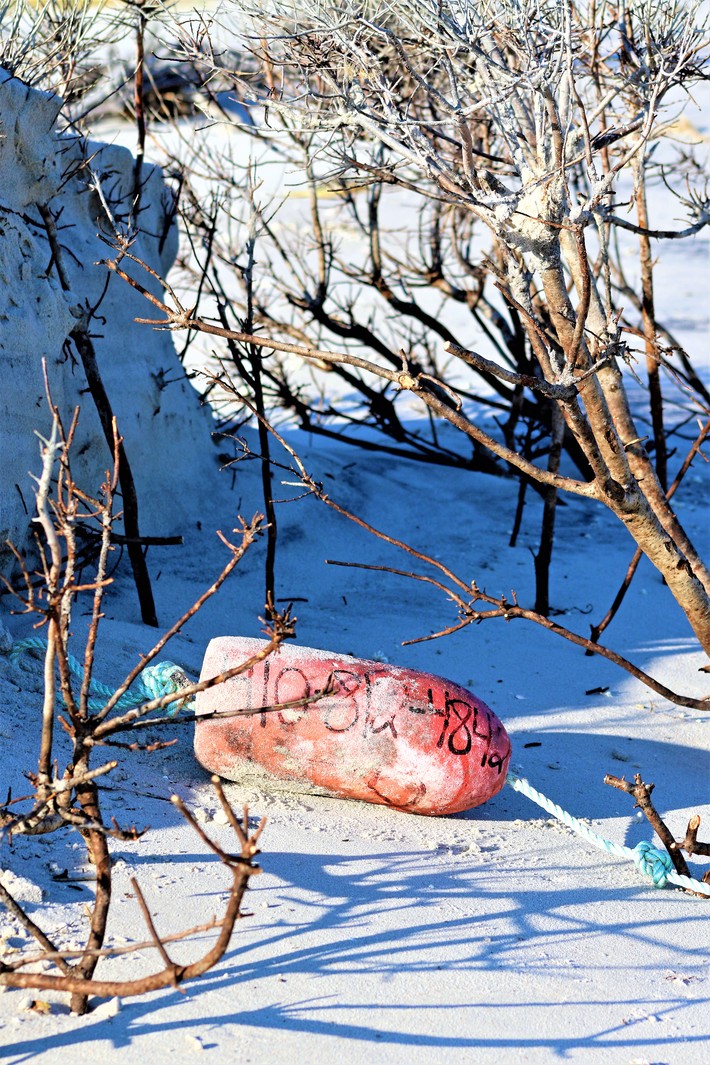 Sunday, October 13, 2019: We fairly quickly turned the weather corner, surfcasting-wise. The beachfront seas have calmed far faster than one might have guessed after seeing the size of the swells during that fair-sized blow eventually named Melissa.

The “blow” part of Mel might have been a little overblown. Hereabouts, she didn’t register winds much above 40 mph, even during gust sessions. On average, her winds pushed about 25-mph. Hell, we deal with winds of that caliber all winter -- when including westerly fair-weather gales.

Melissa was yet another flood-first weather event. The Boulevard from south Ship Bottom to Beach Haven was totally inundated; officially closed to all traffic on a couple occasions. Motoring the totally dry roads today (Sunday), you would never have known that multi-feet of water had been resting atop many 45-mph sections not that long ago.

The much-beloved and highly cheered on LBI 18-Mile Commemorative Run planned for Sunday was dropped in its tracks due to anticipated Boulevard road flooding, which could force runners off the road shoulder and into traffic. Neither the involved police departments nor event coordinators could have guessed a flooding dry-up would come about so quickly, thus their early-on (Friday) suggestion that the run be cancelled. Per the race’s Facebook site, “This decision was based on a collective agreement between the Race Director and local police chiefs due to safety concerns for all involved.”

In rating the backyard flooding, a few folks reverted to the morbid fascination with SS Sandy. A couple Islanders swore their yards registered the highest waters since Sandy’s benchmark flooding. It is quite forgotten that only a few months after Sandy, we had a dandy of a high tide event that, in the official annals, ranked up there with one of the highest on the books. But I’ll gladly wax dramatic with those who declare the Melissa thing was pushing water far up the stoops of many an Island home. One fellow told me, “Our new raised home had no problems, where our old one (torn down) would have been sweating it.” 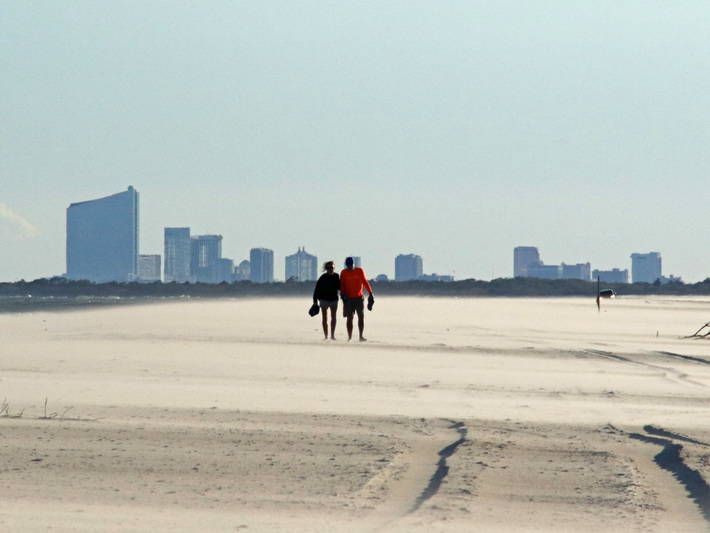 MORE MELS TO COME?: Many an armchair prognosticator is pointing to the lengthy blow as a sure sign of a seriously stormy fall/winter/spring season coming up. Some of the most respected weather orgs (NWS and such) are saying we’re in for an ass kickin’ winter stint.

Forecast cynics will say such weatherly forebodings probably mean we’re actually in for a mild, easy-goin’ time of it. I’ll anecdotally run with the law-of-averages possibility of a mild winter, knowing all too well that mild can mean immensely stormy.

I need to melt the enthusiasm of local snow lovers who have been luxuriating in forecasts of coastal whiteness out the kazoo, possibly by as early as December. Again, they’re snowbanking on those long-term predictions.

My surefire read: Along the immediate shoreline, we’ll instead see rain, as far west as roughly Chatsworth. Further west, there could be some real blizzardy times. If you’re an Islander who loves snow so dang much, the not-far-off Poconos beckon. Just don’t be dragging us into the whiteness by power-wishing for snow. Who knows, one of you just might have a secret power able to move the weather.

As to more impactful side of any upcoming winter storms, we could be in for a real erosive time of it … beginning already. As noted, even overall mild winters can pack a wicked wallop from nor’easters. Mild winters can also usher in some unusually wicked south winds, which eat beaches to the nth degree. Holgate can take no more consumption.

The differential between oceanfront and bayside tides ratchets up the further one goes northward up Barnegat Bay. In fact, by the time the Manahawkin Bay (Ship Bottom and Surf City) section of Barnegat Bay is in full high tide mode, the ocean only a few hundred yards away is well on its way to low tide.

The five-hour flood tide disparity twixt bay and ocean isn’t always appropriately factored in by unsavvy folks preparing to evacuate – or, at the very least, wanting to head back home before the Boulevard shuts down. Adding to such tidal time misreads are tide charts. They’re almost always based on oceanfront tide times.

Many tide charts will have an accompanying small-lettered boxed area offering the oft-confusing add or subtract time adjustments needed to compute bayside tides. It’s well worth deciphering them. I’ll get duly dramatic by saying those bayside tide times are of life-or-death significance.

Note: During storm conditions, tides can rise in what might be called an untimely manner, greatly exceeding times predicted on the charts. In practical terms: Give yourself tons of extra time when timing storm tides.

FISHING OR WHAT?: It’s time to think serious stripering, if only based on the calendar. Bass have been known to arrive this early. They’ve just as often been known to be absent this early. I say that after reading rundowns of the earliest striped bass derbies when “warm water” saw the event go virtually striperless for entire weeks in November – when the minimum size was, well, small.

When I get some time, I’ll transcribe parts of the 1956 reports from The Beachcomber’s “Long Beach Island Derby News.” Much ink was used trying to nail down why stripers were periodically so scarce. More time was seemingly spent arguing over what was wrong with bassing than actually fishing for them.

It’s interesting to read the many references to boat bassers doing exceptionally well as surfcasters suffered. In fact, I’ll transcribe those comments first.

I did a load of south end casting today to no avail. Not even a bluefish salute. That doesn’t mean a whole ton since, firstly, look who’s fishing (me) and, secondly, Holgate – once a Mecca for amazing fishing – has inexplicably become all but barren of better bass. I can’t help but say that. Having seen the precipitous decline take place in a mere decade’s time. Going upbeat, we could get off the striper snide in a flash down there.

The drive to the end is quite easy at low tide -- and not all that bad as rising and dropping tides. As mentioned, sands recover quite quickly after northeast blows.

If south end fishing stays iffy, I might resort to adventuring to the north end, maybe Loveladies, or possibly even High Bar Harbor.

It seems likely the front beach will be nicely manicured by the recent blow. Troughs, slews and sluices will be forming as beaches quickly recover, as happens after nor’easters.

Despite water temps still in the upper 60s, I’m betting some weigh-worthy bass will show this coming week.

Do not land a trophy fish – and pound yourself for not having entered the 2019 LBI Classic. That has happened on many an occasion. Sign up and play it safe. By the by, the largest unenterable fish was in excess of 50 pounds. It would have been worth a solid $1,000 – and eligible for a slew of other prizes. ...

While just to our north ... Bob Misak

Well no stripers today... tried for some tog before calling it a day and caught this guy! 5lbs even on the scale! Yewwwww