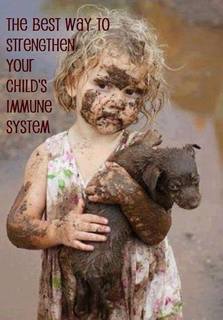 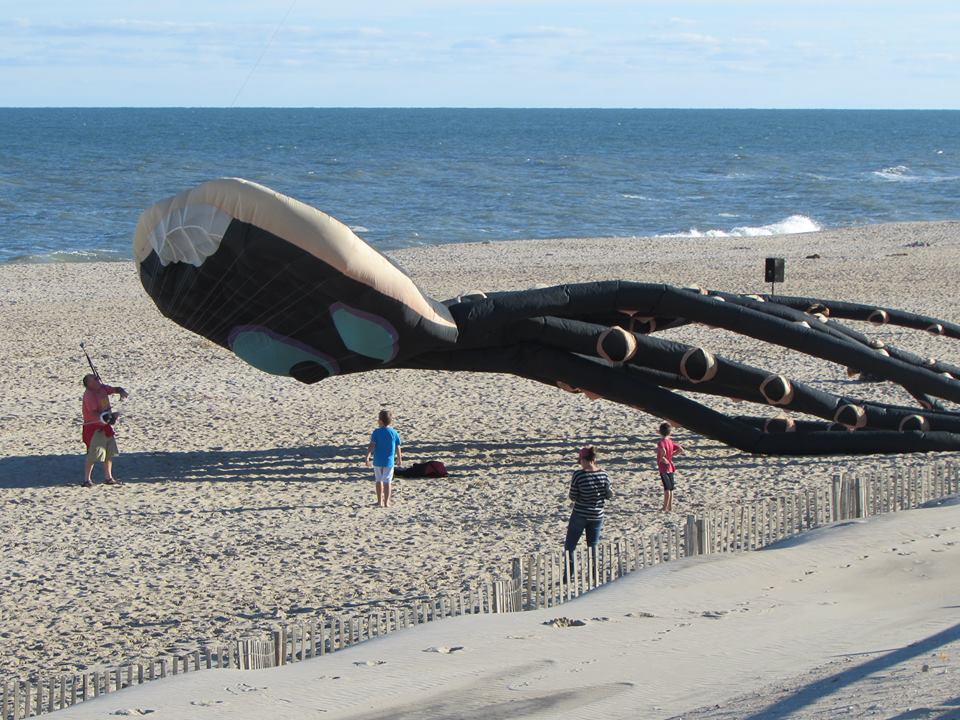 To get a better look, go to Jack Bushko on Facebook. Sunday, October 11, 2015: Had a nasty-busy spell, despite the alleged slowdown by this time of the year. Still, I like volunteering with various organizations and sincerely encourage folks to do same. You’ll meet a lot of good folks. Good starting place is with churches and community centers. St. Francis Community Center is a great start for volunteering. Ask at the front desk or call.

The fishing conditions are shining so bright you’re gonna need shades. The beachfront is all but screaming for folks to get casting – after finally signing up for the LBI Surf Fishing Classic. Look, you know you’re gonna join so get crackin’. It makes the event organizer nervous -- and a bit crazy – when anglers hedge and haw.  Take it from me, you get even a modest fish or two and you’ll cover you incredibly modest entry fee.

I also want to invite boat anglers to join. You know you’ll hang in the top-water realm as long as you can but we’ve seen how often the weather sinks your fishing plans this time of year. With surfcasting, crappy weather often offers the finest fishing.

And there are bass and blues out there. You just have to find them, i.e. by fishing.  Check this out: Yesterday, 10:45 AM >>> Striped Bass Catch … Weight: 34 lbs.; taken by Classicist Merle Van Liere. Note that friendly time-frame. Make sure to keep an eye on the Classic website ... and befriend.

We have a Classic weigh in.
Congratulation's to Merle Van Liere on his 34 pound bass caught in Beach Haven on bunker. It did not take Merle a long time on the beach ( 10 min) to catch his bass using a 10 ounce sinker. He said he fought this fish for over 20 minutes.

This striper won a $500 special prize in addition to the $35 daily prize offered by the Long Beach Island Surf Fishing Classic (LBISFC) Committee. And the angler is in the lead for weekly, segment, and the $1000 grand prize.

The LBISFC is an 8 week tournament run on the beaches of LBI in Oct and Nov. And guess what..... There's another $500 special prize being offered the week end of the ASAC 100th Anniversary Tournament.

So if your fishing the 100th tourney.... Please consider signing up in the LBISFC as well. Doing so could equate to a major pay day! In both the 100th and Classic tournaments. You could also to continue to fish theclassic on the ASAC bye weeks and after the ASAC season concludes!

LBISFC committee members will be at the Captains meeting on Friday October 23 if you wanna sign up. Cost is only $30 for an 8 week tourney with over $15,000 in prize monies up for grabs.....

Please share and spread the word to other ASAC folk....

Below: I'll use this shot as a nice visual reminder that bayside fish also count in the LBI Surf Fishing Classic. 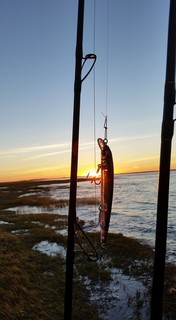 Scientist Takes First-Ever Photo of Rare Bird, Then Kills It in the Name of Science

When Chris Filardi, director of Pacific Programs at the American Museum of Natural History in New York, was finally holding the elusive Guadalcanal moustached kingfisher, he told Slate writer Rachel Gross, it was like finding a unicorn.

Filardi had been searching for the orange, white, and brilliant-blue bird for more than 20 years, when on a field study in the high forests of Guadalcanal in the Solomon Islands, he finally heard the “ko-ko-ko-ko-kiew” sound of what he described as the unmistakable call of a large kingfisher.

After days of tracking, he and his colleagues captured a male moustached kingfisher in a mist net.

“When I came upon the netted bird in the cool shadowy light of the forest I gasped aloud, ‘Oh my god, the kingfisher,’ one of the most poorly known birds in the world was there, in front of me, like a creature of myth come to life.” Filardi wrote in a Sept. 23 blog post.

The team snapped the first-ever photos of the remarkably photogenic bird and made the first-ever recordings of a male variety of the species (a female was described back in the 1920s).

Then the team killed it.

In Filardi’s original field-journal post, no indication was made regarding the bird’s demise, but Paul Sweet, collection manager for the department of ornithology at the American Museum of Natural History and one of the researchers on the team, confirmed that the animal was killed.

RELATED:  The Mysterious Disappearance of Thousands of Birds From a Florida I...

The decision to euthanize the bird so it can be studied as a “scientific specimen” has divided both the scientific community and the public on when and if researchers should kill wildlife in the name of conservation.

Part of the controversy surrounding the bird’s demise is the lack of information on moustached kingfishers in general. Ornithology records only indicate that the bird is “rare,” with anywhere between 250 and 1,000 surviving in the wild. Previous research had lumped the Guadalcanal variety in with the endangered Bougainville moustached kingfisher of Papua New Guinea, but Filardi’s research has him believing they are distinct species. And that’s part of his argument.

In a follow-up post, Filardi said the bird is elusive, poorly researched, and unknown to Western science, though not to the region’s local people. Landowners on the island told the research team the bird, known as Mbarikuku, was unremarkably common and a source of food to some. At the density levels the team observed, and with 15 percent of the island containing suitable habitat, Filardi estimates the moustached kingfisher population at around 4,000 and not in imminent danger of extinction.

With the collected sample, researchers now have a more comprehensive set of molecular, morphological, and toxicological data and plumage data that can’t be garnered from blood samples, individual feathers, or photographs, Filardi said.

“There is also a deeper reasoning here,” he wrote. “The value of good biodiversity collections lies partly in the unforeseeable benefits of those collections to future generations: Detection and understanding of the impacts of marine pollutants, eggshell thinning from DDT, and anthropogenic body size shifts in widespread species are examples of the power of natural history collections.”

Since the birds are isolated to Guadalcanal, they face many of the same challenges of other “single-island endemic” animals, such as invasive species, habitat degradation from logging and mining, and shifting temperatures owing to climate change.

“The specters of extinction for island birds loom in today’s world,” Filardi wrote. “The collection of a single moustached kingfisher is not among them. And, beyond advancing science, I believe this act will positively impact the kingfisher’s world.”

The Fishbucket had a seriously drooping ass on the way back in today. BUZZluck is back.
Michael Delzingo 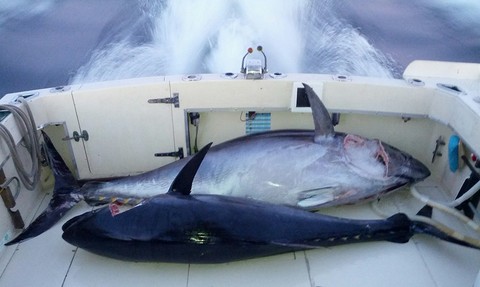 Below: Take it from NASCAR Sprint Cup driver and Mayetta native Martin Truex Jr.: Making a positive difference in the community is “really cool.” http://thesandpaper.villagesoup.com/ 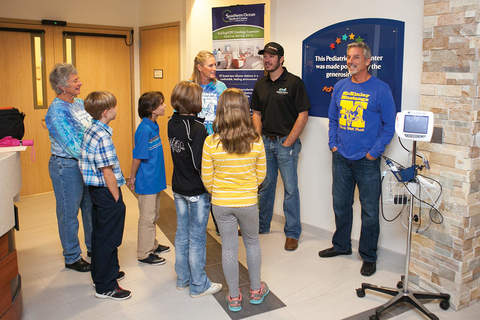 Martin Starts at 17th .. Here's hoping he does one of his patterned rushes toward the front. Too much impact potential from 10th downward during the race. 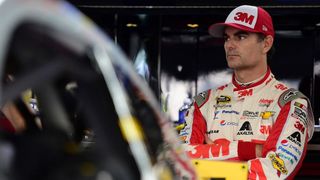 CONCORD, N.C.   —  The first race of the Contender Round of the Chase for the Sprint Cup kicks off today at 12:30 p.m. at Charlotte Motor Speedway.

It originally was scheduled for Saturday night, but heavy and persistent rains postponed the start until Sunday, when the weather forecast is superb.

The 12 remaining Chase drivers will be searching for an all-important win, which will automatically qualify them for the Eliminator Round consisting of eight drivers.

Teams practiced primarily through the daylight hours, which should help now that the race has been pushed back to a 12:30 p.m. ET start. The heavy rains Saturday night washed the racing surface of any rubber build-up and giving drivers a green racetrack for Sunday's race.

As a result, there will be a competition caution on Lap 25.

Five-time Charlotte winner Jeff Gordon will be making his final start at the 1.5-mile track, the track where he earned his first Sprint Cup Series win in the 1994 Coca-Cola 600. Gordon has yet to win a race this season and knows it would be something special if he can go to Victory Lane at the end of the day.

"If we walk out of here with a win, that would be extremely emotional," he said. 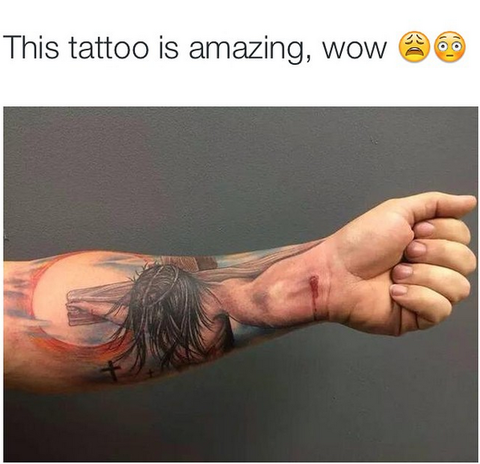 I'd like to see this guy get bit by an unknown poisonous snake next time.