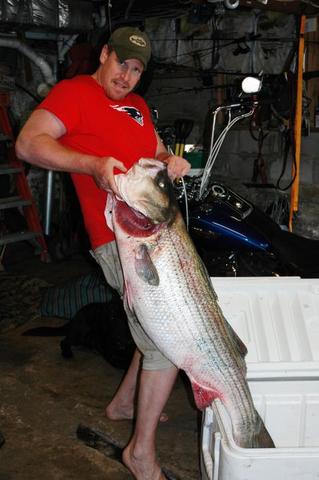 Sunday, October 07, 2012: We got rooked. Cold and drippy but the winds stayed westerly, which isn't really what we need to stir up some serious stripering. Nice northeast winds during a mullet run can often jump start the bassing.  West winds can hold surf casting at bay. The only exception is when huge schools of baitfish are near the beach, being shagged by big fish. It’s still way too early for that chase-and-snag phenomenon.

Starting soon, a hard south wind is the best blow we can get for sparking both bass and blues. If there’s one small upside to the surf being blown flat by offshore winds, it makes it easier to get at the last of the kingfish.

I’m surprised at some of the big catches of blowfish still being made in Barnegat Bay.  It seems blowfish aren’t big on eating in the suds once they begin migrating south. While they’ll freely bite bait in the surf when arriving in the spring, it is almost unheard of to have them biting in the surf going south in the fall. I’m wondering if they travel the ICW, since you can hook them in the bays all the way down to NC. If true, that’s pretty crafty. They stay out of the line-of-fire they’d face in the autumnal surf zone. I have cleaned many a bass with a thoroughly digested blowfish inside.

I had a couple emails regarding my bluefish bite, one from an older fellow who got super sick from a snapper nip. His doctor was surprised at how tough it was to properly treat the wound. Another email was a news story about a near-fatal infection after a really nasty chopper bite.

Bob Schoelkopf of Marine Mammal Stranding Center fame first told me about fierce infections that can be contracted from marine animal bites. He almost died from an infection following a seal bite. Some fish can carry the same pathogens.

Holgate was near anglerless today. I got there when just Stu and one other truck was there. A few others came a bit later but I still had the back cut – free-fire zone – to myself. Tons of bait and a goodly number of blues but nothing like the Rip area where it was again nonstop hooking of 2-pounders. Those fun fish will be leaving soon. I’ve done three batches of bluefish jerky. I hope to catch pone more batch worth, Maybe 10 fish.

The mullet run has actually intensified, making this migration epic. The down side is the lack of crossover between mullet and bass.  Saw a few corncob mullet. Usually a sign of end times, migration-wise. 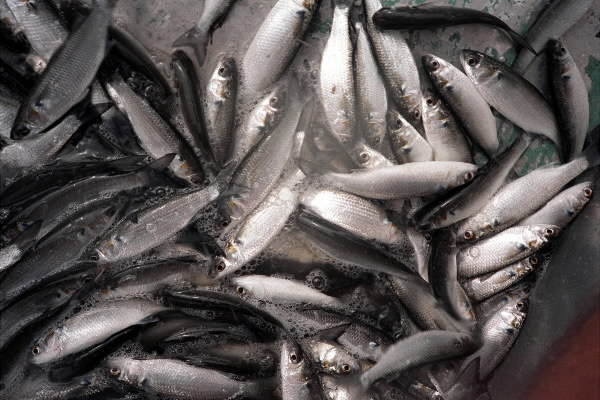 Maybe try this with corncob mullet: It felt strange taking almost the entire month of September off this year. But with my daughter's wedding now behind us, things have finally returned to something like normal around here. And that means it's time to get back to fishing!

I did get out a couple of times this past week with mixed results. Early in the week I made a solo run up the beach looking for signs of the jumbo bluefish or false albacore that should be inshore this time of year. While I did find plenty of small weakfish (hopefully a good sign for next summer), there were no signs of either the blues or albies I was searching for. So back into the bay I ran, settling for filling the cooler with a load of tasty blowfish that I froze up for the winter. Then yesterday regular guest George Selph and I took advantage of the relatively calm ocean conditions and made the run out to Barnegat Ridge, trolling up a bunch of fat albies plus a 5# bonito that came home for dinner and stopping on the way back in to jig up a couple dozen small weakies to complete the slam. Beautiful weather, calms seas, and plenty of fish: doesn't get any better than that.

There's plenty of bait around so now it's just a matter of time until the striper fishing breaks wide open in this area. If it's anything like last year it should be phenomenal. I only have a couple of open dates left for this fall, so now's the time to book that final trip of the year.