Sunday, November 27, 2016: Just another partially-perfect day. The sun made here/there visits, while the ocean couldn’t have been nicer.  You likely guessed what made it only partially perfect … imperfect fall fishing. A thumb’s up to Johnnie Commisso for a Classic striped bass of 18.22, taken in Surf City on bunker. That said, there was a load of holiday weekend anglers in the system so a single fish kinda shows just how slow the go was.

There were baitball bouncing long the beach, north to south. Squat on them. Here’s a Baitball 101 video I put up on Facebook.

Here’s a look at wonderful surfcasting conditions … dolphin and all. Sorry about the typical rawness. The dang brightness makes it impossible to see where I’m aiming the camera.

A photo look at the fineness today. 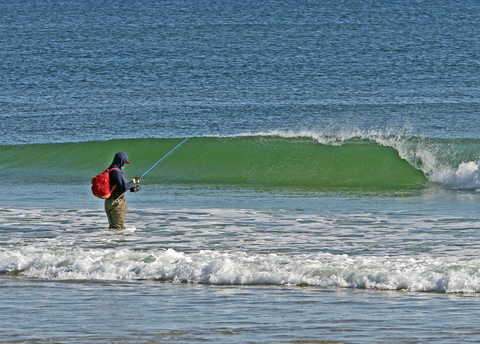 Michael Gallego A rare one for me.. I’m a tad late in bringing up the red drum caught by Joe H. He also knows of another caught near where he caught his. There is a prize in the Classic for the first redfish. Congrats, Joe.

More so than black drum, red drum school up a bit. In this case, they were likely moving south in unison, following the bait of least resistance. I didn’t hear of any redfish taken on boats so these drum must have been hugging the beach, downing peanuts and crabs.

I’ve cooked up redfish and they’re so-so … until you blacken them, then magic happens. I’m not sure why but the pepper-based seasoning for blackening fish draws something out of the fish’s flavor, offering a truly incredible and unique essence … made even tastier by repeatedly cooling the palate with orange sherbet when the spices overwhelm the tongue. I make a what I consider a strong blackening mix but it’s tepid compared to some of those coming out of Louisiana. A number of recipes (rather foolishly) use dried Bhut Jolokia (Ghost Pepper), the seventh hottest pepper known -- spitting out 1,041,427 Scoville heat units (SHU), the Scoville Scale being the pepper rating system. Cayenne pepper is about 50,000 SHU. The hottest known pepper is called the Carolina Reaper, issuing a potentially lethal 2,200,000 SHU.

The active ingredient in pepper is capsaicin … a neurotoxin. In large enough concentrations it can cause seizures, heart attacks, and even death. However, the closest news I can find to a fatality comes via a daredevil in a pepper-eating event who burnt a hole in his esophagus after eating ghost peppers. Had they been Carolina Reapers? Doctors said he would have died if not rapidly treated. Since he survived I can be a wise-ass by saying that would have been a weird-ass “Cause of Death.”

But back to cooking using saner pepper mixes.

I should note that part of the blackened fish magic comes from cooking the likes heavily spiced-coated redfish meat in an iron skillet, preheated to white hot.

There is no blackening fish indoors without a world-class vent system over the stove. Even then, it can be downright dangerous to inhale the smoke arising during blackening. A cook buddy of mine had to be hospitalized when he began uncontrollably coughing while making blacked mahi in Hawaii. I’ve since read that fumes from cayenne pepper and can impact asthma sufferers. I’ve gone into some serious coughing bouts from inhaling spice smoke.

I had Dan Unger of Long Beach Island and his son Danny on a Striped Bass charter. With good results from the day before, we headed into the same area and it was game on with Gannets, Herring Gulls, and Striped Bass working baitfish. The father and son team ended the day keeping their limit of Striped Bass up to 20 pounds, and released a few more Striped Bass and Bluefish. 10yr old Danny was the high hook catching a solid 20 pound Bass on a Tsunami Swim Shad, and he also released two monster Bluefish (27 inches, and 36++ inches). The Lowrance unit was lit up with Striped Bass from close to the beach out to 3 miles. Nice job and a great trip! 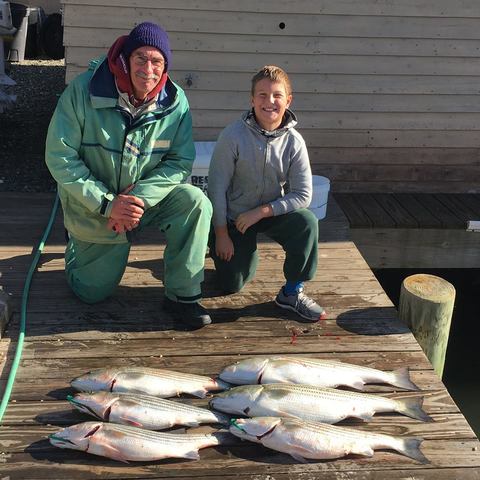 Another amazing morning!! A little chilly with the wind....but worth it. 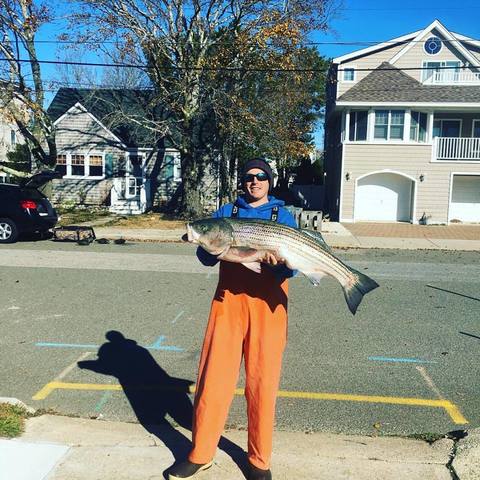 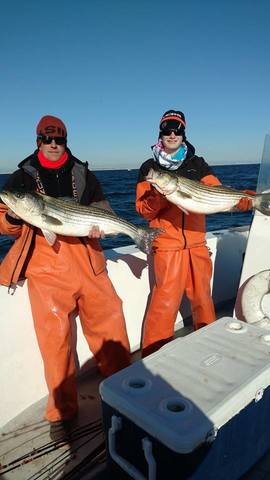 Just like I said, enough turkey, time for some fresh pan fried striper. 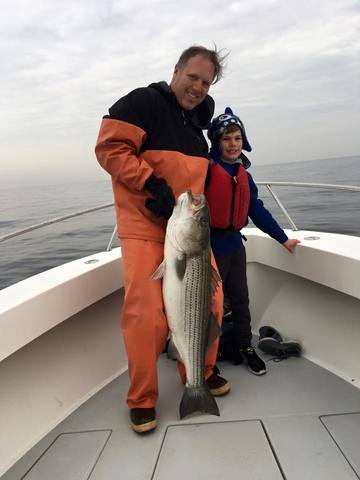 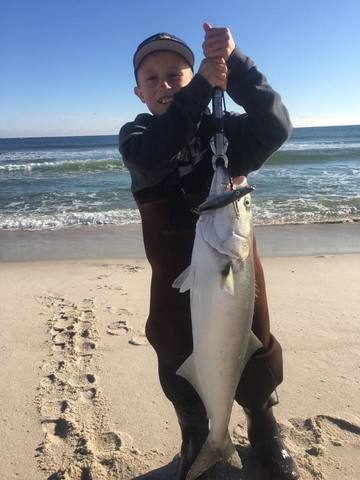 Jumped the inlet and put the boys on some fish that would hit plugs. They waded,got happily wet, and beached some decent fish this morning. Now a hot cup of joe and lunch at B&N's.

Fun day on the tog grounds! Here's a pair of tog that were both over 10lbs. Biggest went exactly 13lbs on a hand scale.... All on S&S tog jigs!