Sunday, November 25, 2018: What’s with these wind storms!? The second storm in a row greatly over performed, gusting over 50 mph

This ref wanted to say he was the last person to intercept Joe Namath ...

Below: Came across this interesting fishing historica from our area. These are war-year (WWII) tags required to be placed on  (fyke) nets targeting stripers and flounder (either fluke or winter flounder). They are made of lead-like material. 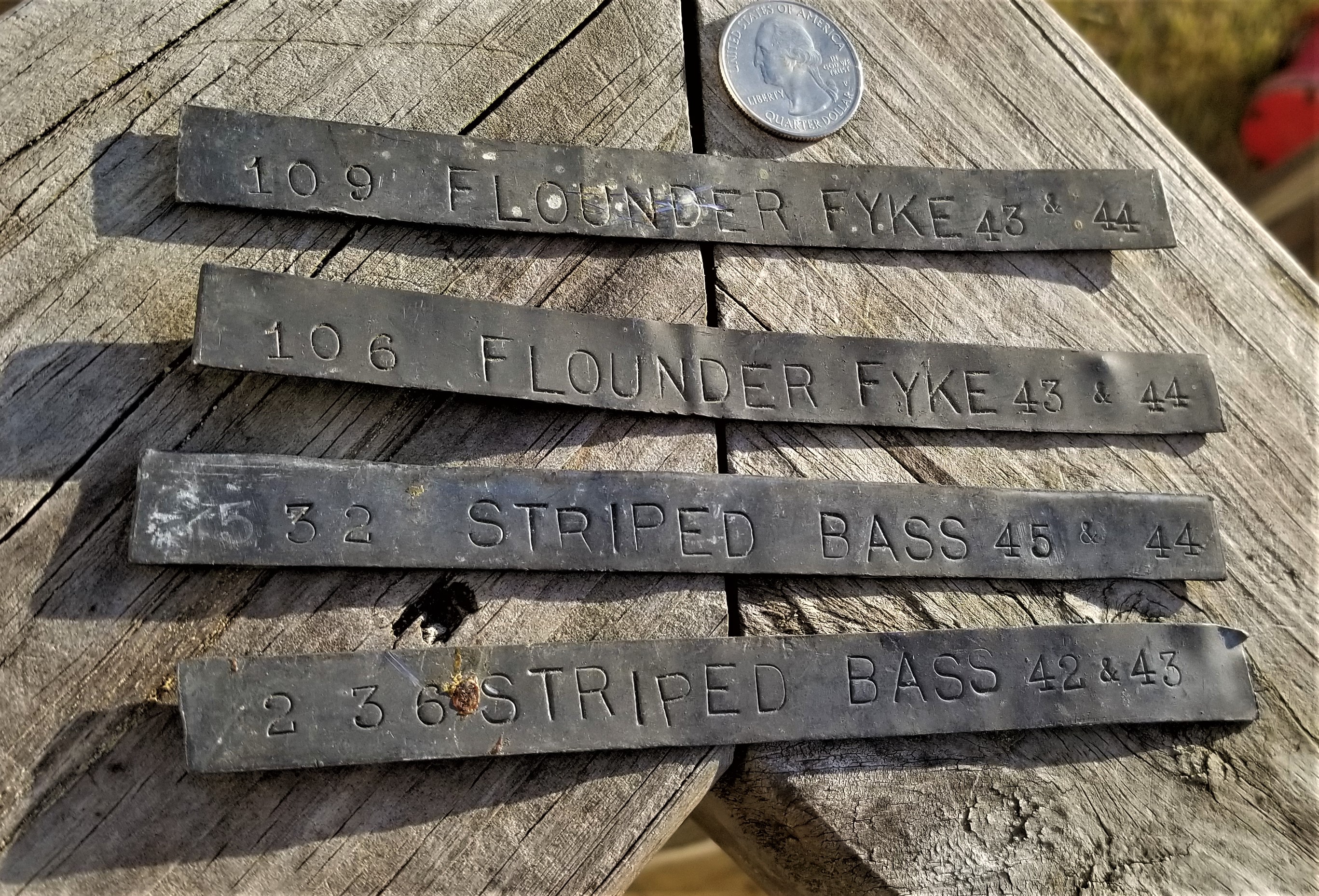 Sunday, November 25, 2018: What’s with these wind storms!? Oh, we also had a load of rain but for the second storm in a row the winds greatly over performed, gusting over 50 mph for nearly two hours straight. There was also some Boulevard flooding in all the suspect spots.

It sure seems we're atmospherically poised so that even low-grade low pressure systems, upon reaching our mid-Atlantic air space, energize right through the ceiling. Hopefully, dropping ocean water temps will soon bump the detonation point further to our north, so we then get only the wrap-around west winds -- from being south of the intensification -- sparing us the onshore gales like those that have been wind-walloping us.

I will reissue my theory that much of the weather we’ll be seeing for many moons to come might very well be odd and unusual to us, sparked by Trump-denied sky woes. I might even make a case that these rapid-fire wind events are already out of the fall norm. Of course, that makes me sound more and more like one of those climate change crazies, the type that end up hurting the sky-repair cause by alienating folks using shock-and-awe, we're-all-gonna-die tactics. I'm aligned with those who want to enact extreme repairs to the environment, earth and sky, whilst allowing everyone to live happily ever after ... along the frickin' shorelines of the world, numbnuts.

Calming down a touch, there was a decent amount of surfcasting pressure out there today, despite the lingering six-foot wind swell churning things up to a six-ounce-plus degree. The water is also that ugly brownish post-blow hue. Hopefully, it’ll clean up by tomorrow.

I fully realize that some great surf angling can be had in even the most turbid waters but not so much when fish are far and few between. Right about now, we'd love to have fish only being far and few between -- instead of being dead as fried chicken.

Lo and behold, a couple entry-level stripers have recently been entered into the LBI Surf Fishing Classic. Despite the modest size of those fishes, they’re up for some nice prizes, thus the need to re-repeat the Classic fact that size doesn’t matter so much in this year's event. i.e. simply catching a bass is a prize-worthy feat. A bass of 28 inches and beyond is most likely golden.

The latest Classic weigh-ins bring the event's total striper take to 37 bass ... in 51 days. Sure, that’s slower than a sick sea cucumber crawling along the ocean bottom but it’s also akin to the suble fascination of thoroughly-defensive basketball games, a pitchers’ duel in baseball or your average soccer game.

I wonder if reverting to the "Derby" days, when a new 4WD vehicle and a fine boat could be won, might add intrigue to the concept that a hugely winning fish can come in small packages. By the by, such a super Classic first prize might be on the event’s radar. Of course, a polygraph for a big SUV winner would be mandatory. No biggy. As most folks know, there are big-game tourney’s with million-dollar first prizes. With those, mega-winners know they'll be going on "the box," a street term for the polygraph.

AGAINST THE GRAIN: In my last weekly column. I wrote about the finer-than-usual sand now on the beaches, thanks to replenishment. Apparently some folks are highly sensitized to the topic. “Jay, There is so much sand on the walkway at the end of our street that we can’t reach the beach,” emailed an older couple. They included some gab about taxes but that was closer to sand-blasting their town rather than seeking suitable beach access.

Their email did get me looking closer at public beach walkways. By golly, many a walkway -- in many a town -- is virtually unpassable, not unlike when snow drifts close off access.

By the by, with the replenishment-related design of most beach-access walkways, it’s not always a simple straight-ahead plow-through to open up walkways. It requires some tricky mini-plow maneuvering -- and creative sand disposal. Thinking in town terms, I can’t imagine the expense to get all the walkways fully cleared and passable for even next spring. It could come down to towns hitting up the feds for sand-removal funding.

Low tide marsh fishing is not for everyone

David Iacono is with Joe Ford.

Pete Dahlberg is with Tony Balistrere.

Endless great fish this morning! No boats in site! Love it!

It was an awesome day fishing for striped bass with my brother Joe. He was the captain of the boat and put me on the fish. The big fish you see below was 47” and weighed 39 pounds. I love my New Jersey fishing!  — with Joseph H. Giberson III.