Sunday, November 09, 2014: I wish I had a slew of striper reports but despite passing hundreds of surfcasters between Surf City and Holgate the hand signals were almost all thumbs down. That’s not to say there haven’t been some decent showings of surfside stripers. The LBI Surf Fishing Classic currently has 28 striped bass catches – and counting. There have also been six bluefish entered. The bass action had been trending toward the north end – and is still prime thereabouts -- but things have evened out a bit with mid-Island (Yeah, Ship Bottom) offering some actionable bass. Even the south end and far south end are throwing out some scale-worthy stripers.

So has the season recovered? Hardly. In fact, today I passed a hundred surfcasters on the beach and as I drove by -- inquiring about fishing via hand signals -- got virtually no thumbs up. In fact, body language spelled boredom. Hell, even older anglers were strolling around texting.

That said, things are on an upswing, now referred to as an uptick. I’ll therefore go all optimistic-ish by saying I see excellent fishing conditions through much of the arriving week. Might this be the week the inlet stripers move southward and beachward? Stay tuned – and keep fresh bunker at the ready. While it’s great to see some fine Classic fish going for lures, bunker is surely the winning attraction. Personally, I’m going to be doing some blind-throwing with a larger cast net (10-footer) to see if I can catch some from-the-hatch baits. Hell, some corncob mullet are not out of the question. Might fresh chunks of hake work?? Hmmm. Might have to throw net at night when the hake move in close to the beach – and jetties. By the by, there are still tons of spearing on the move. Remains an amazing year for these silversides. 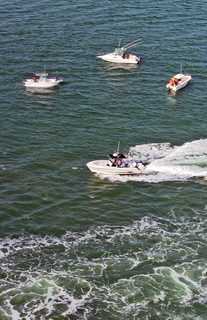 Snowy owl is still in Holgate. The rush to see it is sorta insane. This week there won't be so many folks around. Anyone who simply must see a real, live owl -- that pretty much does next to nothing -- start looking at the 5,000-foot mark all the way down to the 7,000-foot mark. Here's how I saw it -- and it saw me -- Saturday eve. We had a nice weekend of fishing, Saturday's crew banged them up pretty good with 35 bass, 12 of which were keepers. No giants, 28 1/2" to 32" fish with plenty of shorts 20-27". Spots and clams were the trick for Saturdays Trip. Sunday, things slowed down quite a bit, we boated 18 bass with 3 keepers. Spots and bucktails did the trick for these fish. Seems to be plenty of life out there, even had a few Seals popping their heads out of the water!

I had Rob W. (Rutherford), Matt J. (East Brunswick), and Naveen Nirgudker (Summit, NJ) on a 5-hour bay striped bass charter. The trio targeted striped bass with artificials and live-bait, but were primarily interested in catch-n-release. The trio ended the trip with 15 bass, keeping only 1 bass for the table. Naveen caught his first-ever striped bass, and he also caught the two biggest bass of the day with both being 29 inches in length. Most of the bass caught today ranged from 20 to 26inches. Nice job by the guys - hope to see them out in the future.

My brothers and uncle

had a BIG fishing day!

Did not find the bass today but tried togging for a little while and came up with this one about 7 1/2 lbs. Photo by Robert Berger