Kid should remember his first trip to LBI ... or maybe not. 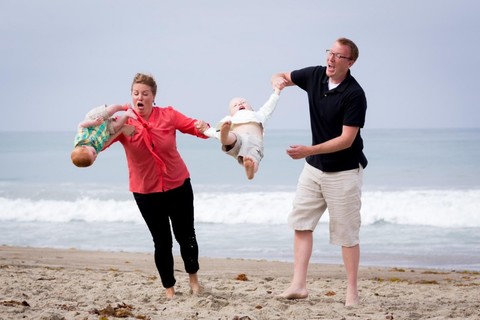 As you likely know, we lost a famed fishing buddy with the passing of ultra-legendary hockey great Gordie Howe (1928-2016). Off the rink he is best known locally for his fishing exploits aboard the vessel Here’s Howe -- out of the Beach Haven Marlin and Tuna Club. Gordie usually fished with his son Mark.

Sunday, June 12, 2016: I knew the west winds were gonna crank but some gusts have been over 30 mph – and aren’t going anywhere soon. If you can take the sand-burn -- and any flies not blown clear out over the ocean -- the beach is a 10-SPF. We’ll likely get some cumulus clouds as the day goes on.

I have to once again alert surfcasters to the increased showing of some large to near-doormat fluke in the suds. I expected same with the huge swings in bayside water temps. The surfline is an option for fidgety fluke, due in large part to crabs. Fluke definitely eat crabs, some more so than others. Not unlike stripers, certain fluke will be loaded with crabs -- almost as if it’s a taste preference, though most of the time it’s simply the most available prey. Speaking of the surf, yesterday’s south winds threw some turbidity into the beachline – though the water is immaculately clear only a hundred yards out (noon). That means the ultra-clear water we recently had in the surf will be moving back in quickly. Interestingly, an angler who got one nice fluke said he could visually see fluke moving along the bottom but not touching any bait or bucktail. Flatties are notorious for pause-prone eating behavior.

Stingrays are still moving in. I'll repeat that there are signs its going to be a high-influx stingray summer. I probably shouldn't suggest this but schools of rays are amazing to snorkel amid. Years back, when we had an insane showing of cow-nosed rays, I did just that (as did many others) and marveled. This time I have a GoPro -- and one of those new age mask/snorkel combos. Bring it on. In Florida, they have stingray petting areas. No need to go there if we get the rays this summer. Even when swimming past in the hundreds, you won't be touching one even if you wanted to ... as I have. Those buggers are fast and nimble. 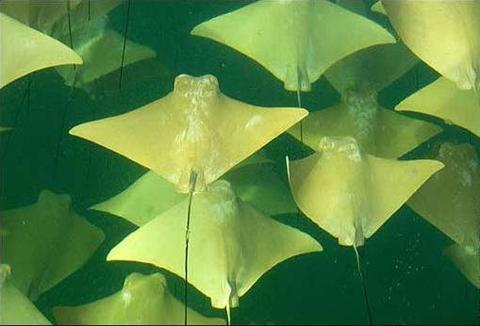 I want to re-mention that the Holgate replenishment will only go as far as the Wooden Jetty. That is of great concern to me, not so much the fact it leaves some far-south homes vulnerable to a storm but that we might not get all that concrete crap covered just south of the parking lot overlook. That concrete/rebar/textile mess is not only an eyesore but an extreme human hazard.

I semi-understand the need to protect endangered plovers but I'm not sure the stretch of sand between the Wooden Jetty and the submerged jetty, even if replenished, is going to threaten the birds nesting just past (south of) the refuge "Keep Out" signs.

There is a record-breaking number of nesting plover down there this year, surely due to the appealing look of the over-wash/erosion area. Plover that had been heading north saw that terrain and forgot their initial game plan. Ironically, the new sand that will migrate down from the Holgate replenishment will create an even larger area of ideal nesting habitat for the endangered birds. Such a sand expanse should be greeted with open refuge arms.

Nonetheless, the original ACE plan to run the sand flush to the border with the refuge has been overturned. I'm now simply hoping to salvage coverage of the aforementioned crap zone.

Finally, after the three dredges finish Holgate, two of them will go south to Virginia and one will go north to North Beach. Work there and in Loveladies will carry on well into the summer. Once done, that will complete the project/contract titled The Long Beach Island Coastal Storm Damage Reduction project.  Then, "Following the completion of initial construction, the project is eligible for continued periodic nourishment." That statement obviously looms large ... even larger than when it was first put into the contract. Beach erosion has seemingly accelerated since then.

Below: As illogical as it seems, the replen sand will only go to where the erosion begins. Here's hoping it all levels out in the end ... or there could be hell to pay. 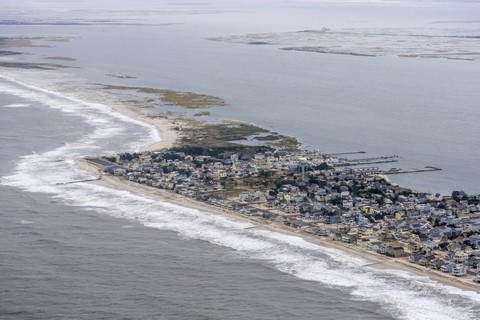 “Facebook had removed my recent post and hammerhead photos due to going against 'terms and policy'.” Ozolins said on Facebook. “Wow. There was not a single thing against any terms etc. Not that I am worried about it, I'm just amazed (or rather appalled) by how they can gain influence from uneducated tree-huggers and break their own rules to remove something rather innocent despite all the other horrendous stuff they fail to remove on their actual system.”

A Facebook representative told mySA.com the post was removed because it was believed to depict poaching, a criminal act. Under Facebook's community standards, users cannot post photos that depict criminal activity or celebrate criminal activity.

Based on information provided by Facebook, the site will remove content that promotes violent and graphic content, hate speech, nudity, self-injury, criminal activity, sexual violence and exploitation, and direct threats, among several other violations.

But Ozolins isn’t letting the recent removal of his photos from crushing his spirit, but he’s warning others of what could happen if you post photos of shark catches online.

“Oh well, so is life... Just a warning to anyone out there who actually posts a photo of a shark, they are coming after you!” Ozolins said.

Ozolins posted photos of the catch on Sunday. The creature measured 13 feet long, and had a girth of 80 inches.

He studied fishing at Texas A&M University at Corpus Christi.

Hammerhead sharks commonly show up in gulf waters and near the shore, according to previous mySA.com reports.

It is also possible Facebook deemed the photos to be “graphic,” but that’s all speculation without a direct explanation from the social media site. It’s also possible someone found the photos offensive and reported them to Facebook, prompting their removal.

In 2014, Texas cheerleader Kendall Jones had several of her hunting photos removed by Facebook administrators. The reason being, according to Mashable, is the photos were “graphic images shared for sadistic effect or to celebrate or glorify violence.”

"We remove reported content that promotes poaching of endangered species, the sale of animals for organized fight or content that includes extreme acts of animal abuse," a Facebook spokesperson told the publication.

Facebook also came under fire  this week for removing a meme of convicted rapist Brock Turner, which said “MY NAME IS BROCK IM A RAPIST.” The content was reportedly removed “in error.”

“This content was removed in error, and we are currently working to restore it. Our team processes millions of reports each week, and we sometimes get things wrong. We’re very sorry about this mistake,” a Facebook spokesperson said in a statement to Gizmodo.

Sent the kids to the beach and said go catch dinner. Kens significant other comes off Surf City beach with 22 lb Bass. Thanks Patty the grill is hot.

It's funny how I find some of my most enjoyable times tying bucktails at 3am. Can't wait to bring out the light tackle to the offshore grounds and do some pot hopping in a couple weeks! 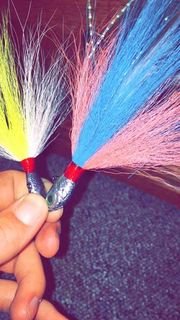 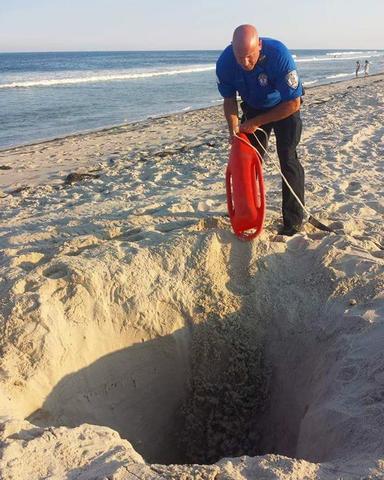 Before beaches get busier & heavy duty shovels start popping up over the dunes, we wanted to remind the public not to dig holes in the sand past knee length. This will be enforced 24/7. You won't reach China & you (probably) won't find buried treasure. Sand, especially our type of sand here on LBI collapses easily. Injuries & even the death of a child on the island have occured in recent years due
to hole collapses. People falling in & hurting themselves, especially at night is a danger too. Holes also make it a problem when we are patrolling & responding to emergencies in our vehicles as well as the beach rake tractor not being able to properly clean the beach. Lets keep craters on the moon, not Harvey Cedars! While relaxing on the beach, shopping in Bay Village and enjoying delicious seafood at many waterside restaurants are all memorable staples of LBI, none of them compare to fishing, according to many practitioners of the sport. Both exciting and relaxing, fishing is a past-time that anyone can enjoy, and no one knows that better than Margaret O’Brien, owner of Jingles Bait and Tackle in North Beach Haven.

For O’Brien, fishing always ran in the family, with her parents coming to LBI in the 1930s and even living on a boat before a house in the beginning. When she met her husband, Robert “Jingles” O’Brien, an avid fisherman himself, her personal affair with fishing really took off. It had to. “If I didn’t fish, I didn’t see him.”

When the fishing company that Robert worked for went out of business, the natural next step for the couple was to open up a fishing store of their own in 1976. When Robert passed away in 1996, Margaret took over running the shop. It’s required a lot more hours since she took over, but worth every minute.

To Margaret, one of the best parts about fishing is that it’s a unifying force: Anyone of any age or background can come together to fish. There are no prerequisites or intense training; anyone can pick up a rod and go fishing, while having a great time in the process.

“Only in fishing can you see an 80-year-old next to a 12-year-old,” both having fun and both performing the same activity, she said. It also creates a community of which people like Margaret can be a part.

But all good things eventually come to an end, and this could be O’Brien’s last summer at the shop. She has put Jingles on the market for sale.

O’Brien “just felt it was time” after 40 years in the business, and while she’s looking forward to retirement, she’s going to miss the people and the community she and her husband built the most. Getting to watch nearly three generations of customers come into her store – sons and daughters, fathers and mothers, grandfathers and grandmothers – fostered connections that will stick with her even after she gives up the shop.

Despite her decision to sell, she doesn’t plan to stop fishing anytime soon. In fact, upon retirement, she’s most looking forward to having more time to fish. “I’m not the kind to just sit on the beach,” she explained, so she’s eager to spend the rest of her time on LBI at her favorite fishing spots, doing what she loves the most. Ok. As mentioned earlier myself and a good friend and fishing partner Ryan had a great opportunity to fish some of the new BEACHMASTER large 3oz single belly hook Darter proto types and man did they produce this spring for us from basically the first time I clipped one on. As with all BM plugs - made to cast great and swim true to go along with the usual quality components and finish we are use too. Another home run from BobbyG
;-) 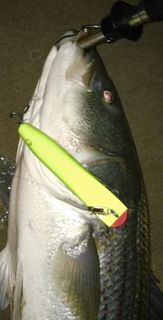 Looking for Lady Anglers...that's right, women who fish and want to promote the sport.